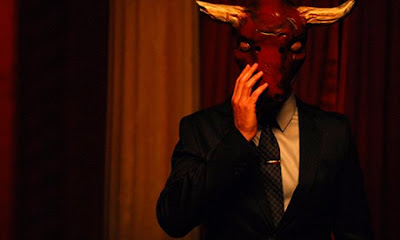 What do you know, it's another low budget, indie, found footage film. Wait a minute, didn't I just review the exact same type of movie last week? Is that a coincidence? Or is this some kind of conspiracy? Find out in Devlin's Domain.


I have a lot of interest in conspiracy theories, not gonna lie. I may not believe everything I hear, but I appreciate the effort it takes to draw these unpopular conclusions. Most people have one narrow idea of what a conspiracy theorist is. It tends to be the same model the mainstream media pushes out there. You get the image in your head of some goofy, crazy guy that thinks Elvis is still alive.

There is another type out there that would be given the same label. These are people who gather facts that have been under reported and buried. They may string some of these facts together and it will point to a conclusion that the majority seems oblivious of. Or they may simply ask a question about a reported story that makes no rational sense. If a person were to state that three buildings collapsed on 9/11 even though one of them wasn't even hit by a plane, that person is at risk of being labeled a conspiracy theorist for merely stating a fact.

The reason for this is because the majority haven't been exposed to certain information. The media over reports trivial nonsense and under reports important issues, assuming they're even reported at all. Real information has to be sought after. When people hear troubling information from anyone but a news anchor they usually dismiss it. It doesn't fit into their view of the world. But if they open their mind and seek out more information, they may reveal....

This is another indie horror flick I came across on Netflix. The title caught me of course. I thought it was going to be a real documentary at first and was a little disappointed to find out otherwise. I recovered from the disappointment shortly after though.

Aaron and Jim are a couple of documentary filmmakers whose next project involves an internet-famous conspiracy theorist. They think he's a nut and crack jokes about him behind his back. The concept for their documentary doesn't seem to be about the conspiracies, but the crazy people who believe in them passionately.

Their subject frequently rampages through the streets with a megaphone and spreads his message to the masses. He claims that the world is run by an elite group of wealthy people who keep us enslaved. Things you may already know, but don't want to dwell on. This guy is clearly obsessed and keeps newspaper clippings and charts all over his walls. He's in a constant state a paranoia and it's pretty obvious he is a parody of Alex Jones. 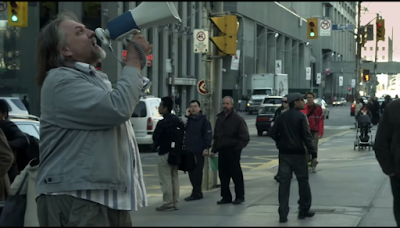 They shoot a few interviews and the guy shares his knowledge of different events and stories that led him down his current path. One day he doesn't answer the phone or show up for their scheduled interview. They go on a hunt for him, but he seems to have vanished completely.

They collect all of the data he left at his apartment and on a whim start piecing it all back together. Aaron is suspicious of the disappearance and starts to think the guy was onto something. He starts his own investigation and connects the dots himself. His partner isn't too thrilled about the new direction they're taking, but goes along anyway. 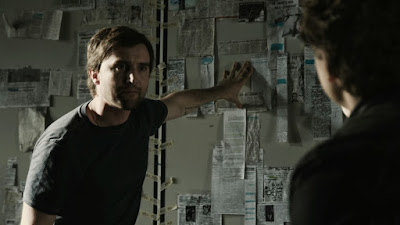 Eventually all the conspiracies are narrowed down to one secret society, which they decide to infiltrate. This society is undoubtedly modelled after the Bohemian Grove group. It's a real group that consist of some of the most powerful men in the world. It's a male exclusive group, but they allegedly parade around as women during some events. One of their ceremonies, called the Cremation of Care, was actually caught on tape. It depicts a group of masked men sacrificing an effigy to a giant, stone owl. Here's a shot of that 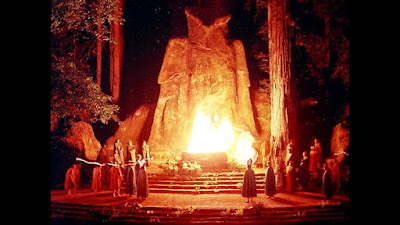 They manage to make the right connections with people who remain anonymous and get inside the group. They sneak in a hidden camera and all of a sudden you're thrust into an ominous situation. I was really dreading what was going to happen to these guys. They did a really good job of building tension. 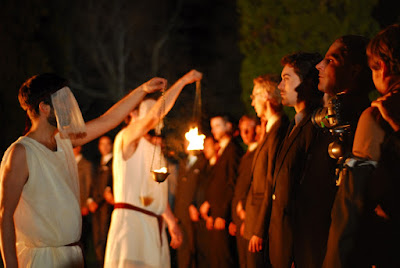 This was a bit of a slow burn, but the conspiracy stuff kept me interested. The ending really paid off as well. You don't really know where they're going with it until you get there. I would definitely recommend this. There's a lot of information presented that's worth looking into, and I think they had a good balance of "crazy conspiracy theorist" and "truth seekers". I'll give this a 7.5 compared to IMDB's 6.4.

I don't think there's anything wrong with questioning the status quo. In fact, I think that's the best course of action. "Think for yourself, question authority" as Timothy Leary would say. Of course there are conspiracies out there. There have been conspiracies all throughout history. To recognize them and acknowledge them is one thing, but to compulsively obsess over it may be a bit unhealthy. Especially when you start destroying your personal relationships and creating conspiracies out of thin air. This is when you start giving a bad name to people who are simply trying to find truth amidst the lies.

I'm going to mix some DMT and Hunter S. Thompson in with our horror next week in Devlin's Domain.

About Me: I have a couple of different aliases, but for this column I will use my middle name. I am Devlin and I currently reside in Atlanta, GA. 32 years of age and still feeling immortal. Former Rockstar, current Pro Wrestler and hell, I'm still a Rockstar at heart. I got my first taste of obscure cinema when I was about 8 years old. My Dad would take us to the video store every weekend to stock up on classic horror films to watch on his projector. They were mostly harmless, PG-rated horror films like the great Universal monster movies. Then one night he rented a movie for himself to watch after we had gone to bed. I was so intrigued by this film that I wasn't allowed to see. I begged and begged and he eventually caved. That night I was exposed to a film unlike anything I had seen before. Ever since that night I wanted to find more films that gave me that same sensation. I wanted to feel shock and disgust. I found my place in the Horror aisle. The film I watched was Faces of Death. Thanks Dad.
Posted by Devlin at 9:40:00 PM