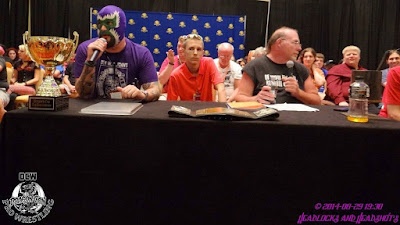 I wrote this last night while trying not to get too upset in front of my co-workers:

I just learned of the passing of Gerald “Tiny” Dockery.

Tiny and I only run in the same circles once a year, so I was unaware of his passing away in April until just recently, but I am greatly saddened by the news. Those closest to Tiny have my deepest condolences.

If you don’t know, Tiny was one of the men behind the greatest wrestling shows on the planet – Dragon Con Wrestling.

Every year Tiny and AJ would sit at the commentary table, calling some of the craziest, most ridiculous, and entertaining action I’ve ever seen. DCW is so good that me and a few of my friends started calling ourselves the “DCW Hooligans” and sitting in the same spot every year. Booze would flow, matches would get wilder, and we’d get crazier. And AJ and Tiny would sit at that announce table, shaking their heads.

Every year Tiny and AJ seemed to accept us just a bit more, even getting to the point of acknowledging us and – to a certain extent – egging us on. They made us feel like a part of the show, and feeling like a part of DCW is one of the greatest feelings in the world.

Last year I had the privilege of actually being a part of the show. I was recruited to sit at the announce table in AJ’s spot and call matches with none other than Tiny himself. I had called matches before, but never an entire show. And certainly never one that I held in the same esteem that I do DCW.

Tiny was gracious and helpful while I was getting my footing. He helped me out with timing and with the wrestlers’ names (Tiny didn’t know them, either, but he had the call sheet and was more than happy to share!). Workers come from all over to participate in Dragon Con Wrestling, and I didn’t know everyone there. Once I did get comfortable, Tiny was delightful to work with. He let me go off on my tangents and had some sharp responses when appropriate. I think that by the halfway point we had a pretty good act going on.

Never mind that nobody could actually hear it…

I feel blessed and privileged to have been able to work with Gerald “Tiny” Dockery, even if only for that one night. He treated me with respect, professionalism, and courtesy, which is something that you don’t always see in the wrestling business; especially when you’re the new guy. His kindness was part of the reason I was so looking forward to announcing again this year.

Well, that and the fact that Tiny was just a hoot to work with.

I will always treasure the memory of that night and I’ll always be thankful to Tiny for taking this green-as-grass loudmouth under his wing. He did me a kindness that not many others would have.