Not Your Daddy’s Poker: Card Games For the Geekdom

No one appreciates a good card game anymore.  Board games are great.  RPG campaigns are fabulous and a great way to gather friends.  But card games are just as energetic and crazy.  They can make you laugh just as hard and result in just as many friends made- and lost- as any good tabletop in the world today…and the geekdom is full of em’.  Allow me to review some of the best hidden gems out there.  Poker is for ESPN.  These card games?  Well, as Hardison says in the TV show Leverage, it’s the “Age of the geek, baby.”

The cult TV show Firefly has cornered the market on board games, and I think my family is making it our life’s mission to collect them all.  Out To the Black, however, isn’t so much a standard tabletop as a smaller is, scaled down card game that plays like a stat building game.  You can play as any member of the crew, including our beloved Captain.  Each crew member’s playing card has specific stats for; Flyin’, Fightin’, Thinkin’.  They have specific levels for each ability; Jayne for example has a high Fightin’ stat, but his Thinkin’ is monumentally low.  Gee…wonder why that is… 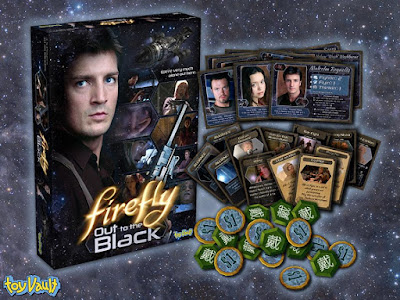 You have a stack of cards that you draw from; a five card hand.  The player with the most recent birthday will draw a card from the Job pile, picking out what job the crew will run.  They are divided between one man jobs, two man, three, etc., so sometimes you work as a team and sometimes you fly solo.  The cards in your hand have numeric values that you can add to any of the stats for your crew member; you have to accomplish a certain total stat number to complete the job.  Some stat numbers on the cards you draw are wild and can be put anywhere, some are specific to one stat only.  You lay down a certain amount of cards and can even redraw and use the special abilities of your crewman if you have to.  All crew working the job total the amounts from their hands together as they drop the cards to help complete the job.  You make the total, you make the job and you get the money.  You fail, the job goes south and the Alliance tags you…complete with an Alliance penalty card.  Sucks to be you.
The absolute best game on the planet is a game that can end in one round and in under five seconds, or can last for hours if you know how to manipulate the cards.  You will laugh so hard that you cry every time you play it.  It is the most hilarious game ever with only one rule; there are absolutely no real rules.  It is called “We Didn’t Play Test This At All.”  One huge stack of cards on the table.  You draw 7, and the player that goes first drops a card, and round robin style from there.  The mission is to simply be the last one standing and make the others lose.  Sounds like an easy win, but it is how you win that makes you have to pee your pants due to laughing.  Here are some examples of cards that you play every round: 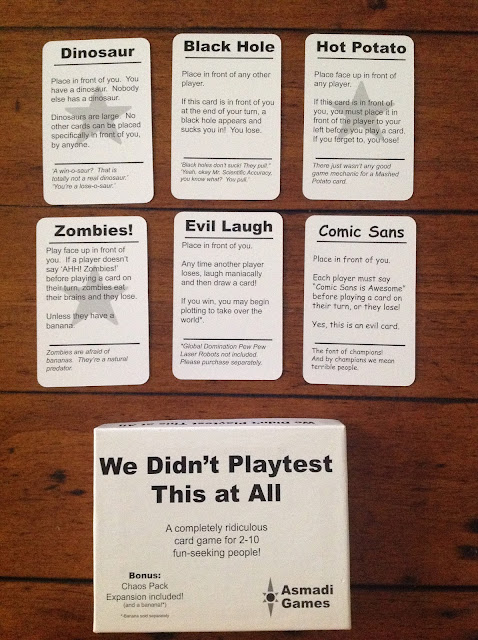 There are blank cards in which you can make up your own rules.  You can throw down a blank card and say “Anyone married to me has to lose immediately!”  Boom!  Your spouse is out of luck.  You want a Kitten Ambush card, but don’t have one?  Declare your blank card reads, “Kitten Ambush!”  There are also “Star Cards,” which are specialty cards that you play permanently.  Their effects last throughout the game and have to be repeated by every player.  Whoever does not perform the Star Card’s action each time they take a turn…you’re outta there, baby.  An example of a Star Card is “Everyone must name a food and say “MMM…. (Insert food here) tastes good” each time they draw a card.  They don’t, they lose.”

Tell me that isn’t fun.

“Playtest” is a family favorite.  We pee our pants with laughter every time we play it because it just never gets old.  And yes…they have an expansions out the wazoo, all from Asmadi Games.

The next game…well, be sure that you are comfortable with yourself and that your soul is well adjusted before playing this game.  I can safely say that only adults should play it, because not only is there language, but this game will make you question whether or not you were ever as moral as you thought you were.  I am talking about Cards Against Humanity.

One black deck, and one white deck.  The black deck is for the Judge, who picks one card and reads it out loud, laying it on the table.  All others draw ten cards from the white pile, and have to choose a card that they feel answers the statement from the black card.  They give their answers to the Judge, who picks the best one.  A grown up Apples To Apples or Balderdash, as it were.  Seems easy enough, until you read some of the answers and realize the Judge will probably be praying for your soul. 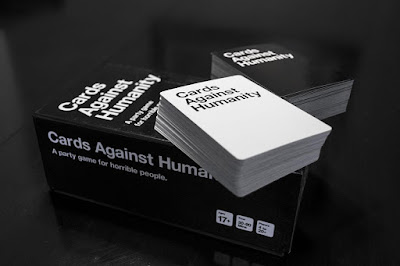 Here is an example of a round.  The Judge draws this card from the Black deck:
“The official cause of Jar Jar Binks’ untimely death was ruled as ____”

The answers that each of four players chose and dropped that the Judge has to read/decide from are as follows:

And these were the PG rated ones I could use for the review, people.  You will laugh, you will gasp, and by the end of the game you will begin to think that, like Malcolm Reynolds, you are going to the “Special Hell.”  And you didn’t even talk at the theatre…

This next game I am new to, but have fallen in love with.  It’s called Smash-Up, and is quickly rivaling Munchkin as the legalized crack of the card game world.  Like Munchkin, Magic: The Gathering, etc., expansions come out regularly for this game.  It’s the various deck expansions that drive you crazy and make this game even more crazy and fun.  The game format is similar to the games that I just referenced, with similar stats on the various cards in your decks.  You get to pick two different face down decks to play, shuffle them together, and draw a hand.  These two “smashed” decks are your army with which you crush the others and infiltrate the “bases” that are laid out on the table.  Last man standing wins.  What makes this game crazy are the deck combinations you can come up with.  Examples of decks to play: 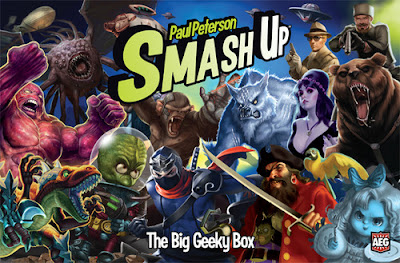 You find when playing Magic: The Gathering how different colors work together.  Red and White work well together for direct damage and “holding back the enemy.”  Blue and green work well for deck discarding and Mana ramping.  Smash-Up works similarly as you find that different types of decks work well with each other.  I found in my first run that Kittens and Insects were a horrible draw.  Sadly you pick them at random while face-down, so you’re stuck with what you get.  That is half the fun, but also half the crappy luck.  Like a bad Mana draw in Magic, sometimes you have a bad Vampire/Insect draw, or a bad Cthulhu/Kitten draw.  But tell me the very concept of this doesn’t just make you dance in your seat and giggle as you rummage through the comic books and empty red bull cans on your desk, then tell your Guild mates they have to raid without you as you fly at top speed to your nearest gaming store for a copy of this game?  Plus an expansion or two?

I knew it would.  Now go spend that rent money on these games!  Your landlord might be unhappy, but your Game Night buddies will love you for it!