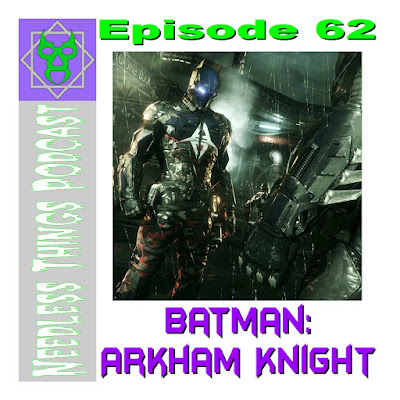 On June 23rd, 2015, Rocksteady’s final Batman game was unleashed upon the world – Batman: Arkham Knight. After a week of playing, Phantom Troublemaker gathered a group of Batmaniacs to talk about the game and the history of the franchise.


Phantom is joined by Needless Things Irregulars Ryan Schweck and The Belligerent Monkey, as well as newcomers Mike Nelson and Chris “Crispy” Lloyd. The fellas reminisce about the wonder of Batman: Arkham Asylum actually being a great game, discuss how much the world opened up in Arkham City, and share differing opinions on the quality of Arkham Origins.

After a little Arkhamverse history, the crew dives into a discussion of Arkham Knight. There are minor spoilers, but Phantom provides multiple warnings when they’re about to happen. Most of the talk is focused on the gameplay and features rather than plotlines. None of the guys had finished the game at the time of the recording, so plenty of mysteries were still in play.

PLUS! As an extra bonus feature after the show, Crispy and Phantom – further along than the rest of the crew – discuss certain plot points and in the outro Phantom shares his guess as to the identity of the Arkham Knight!

Listen in as Phantom, Ryan, Jay, Crispy, and Mike talk about one of the most highly anticipated video games of all time!:

Be sure to join the new NeedlessThings Podcast Facebook Group and get in on the conversation for this week’s episode! Let us know what you think!

Today’s musical selection is from friends of the show, Calabrese! Their newest album, Lust for Sacrilege, is available from CalabreseRock.com. For today’s track we’re going with something a little older (and more appropriate). From their masterpiece Born With A Scorpion’s Touch – “I Wanna Be A Vigilante”!