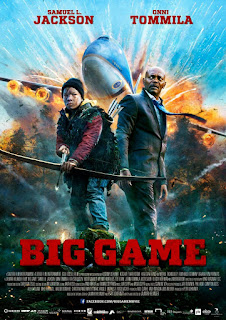 This is a spoiler free movie review!

Jalmari Helander is probably not a name you have heard or even recognize. Just by the name I probably wouldnt either but I do know his 2010 Christmas movie very well. Rare Exports: A Christmas Tale has reached cult status in just a few years. It also has the honor of being one of the Christmas movies in my collection that is a must watch every year during the holiday season. Around October of last year, I discovered that Helander had another movie coming out entitled Big Game.


Now, keep in mind, like Rare Exports, Big Game is a Finnish film. This scares people sometimes because foreign movies can be much different from american movies and subtitled which tends to bother some people. The two films are completely different from each other. Rare Exports is a creepy Christmas story which is mostly subtitled while Big Game is an action movie that is mostly in English. Yes, there are some subtitles but I'd say 90% of the movie is spoken in english.

When I first saw the trailer for Big Game, I was immediately excited. The story doesn't seem original at first glance but I stand behind the fact that it is. It blends some of my favorite action movies and makes one beautiful little baby.

The story in a nutshell is this.

Air Force One is attacked and the President of the United States of America is put into an escape pod landing in the middle of the woods in Finland. At the same time thirteen year old Oskari is sent into those same woods to prove himself to be a man by hunting and killing whatever the woods chooses to give to him. Oskari is the first to find the President but unfortunately the men who attacked the presidents plane are not far behind. It's up to Oskari to help the president escape and find out who is after them.

I warn you, if you watch the trailer it will spoil about 75% of this movie. Of course, I watched the trailer about a hundred times because I was so excited for it but I didn't let that ruin my experience. Lets just call it my public service announcement to allow you to go into this movie with fresh eyes which is tough to do these days.

Everything about this movie just feels like a summer action blockbuster. The music, the scenery, and even though some of it is CGI, it doesn't look like it. The acting and dialogue are at times a bit on the cheesy side but I have to think that this was done intentionally and its some of my favorite parts of the movie. Even the story reeks of eighties action movie goodness. From one liners to over the top explosions. The story, although simple as it is, does try to go the extra mile to keep the viewer on their toes and does a good job in doing so. Something that amazes me is that the trailer gives away one of it biggest surprises. Even though its revealed fairly early on in the movie it happens fast and comes out of nowhere and should not have been included in the trailer in my opinion.

I think the acting in this movie is some of the best I have seen in a movie from the entire cast. Everybody seems to know their roles and what their character is their for. Of course, Samuel L. Jackson is Samuel L. Jackson but that in of itself is pretty good. And he is the freaking president, how cool is that. Onni Tommila plays thirteen year old Oskari and does an outstanding job. As an added bonus, his chemistry with Jackson is spot on. Which is important because they have a lot of screen time together including a campfire scene which builds the characters nicely.

Ray Stevenson is absolutely brilliant as one of the president's secret service agents. I have become a fan of Stevenson over the year because of his portrayal of the Punisher in Punisher:Warzone which I think is a good interpretation of the comic book character. Other then the skull shirt wearing vigilante he also played Firefly in G.I. Joe: Retaliation and made me care about a character that I previously did not care about.

Victor Garber and Felicity Huffman are also people you will say “Hey, Ive seen them from other movies,” but you wont be able to name one nor would you know their names at the sight of their face.

Jim Broadbent plays the oddball character Herbert. He is your typical looney character that ends of being smarter than every guy in the film. I would love to see a spin off movie with his character, he is that good. His line delivery is just so deliciously over the top that it makes me love the movie even more when he is on the screen.

Another feat that this movie pulls off, is the fact that it is an action movie rated PG-13. Normally I would scoff at an action movie that was PG-13 and not R but Big Game pulls it off flawlessly. At no point in this movie would I have thought that it was not R but then looking back on it, the violence is not that graphic and there is very little cursing. I would have loved to seen this movie as a youngster.

This movie isn't being talked about by anyone that I know, which is an absolute shame. It is a fast paced action movie which has a running time of an hour and a half, which I am convinced is the perfect length for a movie. There are virtually no slow spots and each scene is important to the film. The story really is a coming of age story where a boy finds out how to become a man. It doesn't pound that into our heads but the sentiment is definitely there. If you want a movie that aims to entertain and delivers with a knock out punch then trust me folks, Big Game is the movie for you.