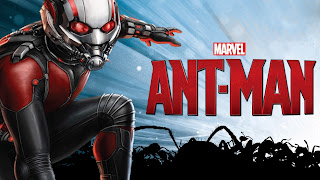 When I first heard about Ant-Man I wasn't too excited. He was never one of my favorite characters, and I didn't see how they could do anything big enough to fit him in with everything else that's been going on in the MCU. Of course, when I heard about Paul Rudd being the lead I became much more interested. Like every other red-blooded American woman over 30 I do love Paul Rudd. I still didn't see how it was going to add to the giant epic-ness of the other movies, but at least now I was willing to see it in the theaters.


And the more I learned about it the more I wanted to see it. Because, let's face it, as many things as The Avengers and Iron Man (well the first one anyway) movies did right they were getting a little stale in some departments. There are only so many times gods and monsters can save the world in some huge mind-blowing way before you start wondering how they're going to keep upping the stakes. There was a giant chunk of the planet flying around in Ultron. If they follow the Civil War story, and have some mutant type people blow up up a city to start the conflict will it even be all that impressive? Half of New York City was destroyed in the first Avengers movie! It's been done. And seriously, if I see one more teaser for Thanos while knowing that it will still be years before Thanos joins the story properly I'm going to scream. Stop setting shit up, and just get there already! Sorry, got off track for a minute... 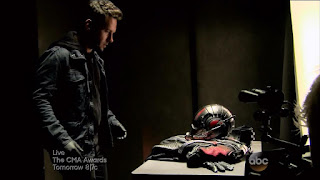 The trailers for Ant-Man looked different though. No gods or monsters, and seemingly little involvement in everything else that's been happening in the MCU lately. As big as everything was in The Avengers, in Ant-Man it's all on a much smaller scale. I'm not trying to make a pun, really. It's just the best way to describe it. There is no epic battle to save the world because at it's core Ant-Man is a heist movie. Like Ocean's Eleven with a lot fewer guys. As Hank Pym says to Scott Lang "I want you to break in a place and steal some shit". 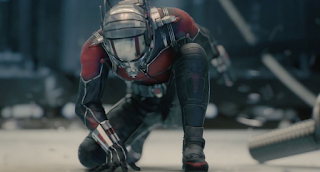 So first some set up if you haven't read a bunch of reviews or summaries yet. Scott Lang is an engineer who does three years in prison for hacking into the severs of the company he worked for to blow the whistle on their shady dealings. He's got an ex-wife who wants child support, and won't let him see his daughter until he starts paying up. Given his record he has trouble finding a job, and so when his roommate/former cellmate shares a tip about a job he and his buddies want to pull he gets drawn back in to a life of crime. Despite the fact that they're thieves and hackers they're a pretty likable bunch. The house of an old rich guy is sitting empty with a huge safe in the basement. Scott breaks in only to find a weird suit and some jars or weird stuff inside. Meanwhile, Hank Pym has been pushed out of Pym Tech by his former protege Darren Cross because he's all bitter about being kept in the dark on Hank Pym's real work with Pym Particles. Cross has been working ever since to try and recreate the formula that will let people shrink to the size and relative strength of (you guessed it) an ant. Unsurprisingly, Cross is obsessive, and starts going a little crazy in his quest to make itty bitty war suits. Hank's daughter Hope works for Cross, but is helping her dad on the sly because she knows that if Cross gets it right shit will get bad. Hank has allowed Scott to break into his house and get the suit because he wants to train Scott to use the suit, and stop Cross. The plan is to get small, and steal everything Cross has been working on to keep the technology under wraps. There are lots of training montages, and Honey I Shrunk the Kids kind of stuff before Scott gets it right. And that's about all of the story I feel like I can talk about without heading into spoiler territory. 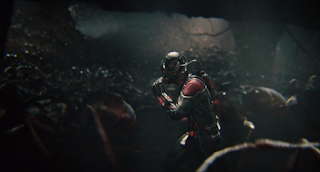 This movie is absolutely worth seeing in 3D. I'm usually hesitant because I wear glasses, and wearing the 3D glasses over them gives me a headache. Most movies aren't worth the headache, but this one was. All of the tiny guy running through a big world, and the size changing fights are great in 3D. The special effects are pretty spectacular. The ant army is believable, and the tiny fights are just the right mix of humor and danger and drama (DC could learn a thing or two here). There is a scene at the beginning that shows a young Hank arguing with Agent Carter and Howard Stark that is amazing. It is the best CGI of making someone look like a younger version of themselves that I have ever seen. Michael Douglas looks like he could be straight from Wall Street. And even though I don't have kids I think this was a pretty kid friendly movie too. Scott's daughter is his entire motivation for what he does, and the best fight in the movie takes place on a train play-set in her bedroom. There are a few schmaltzy moments, but they are at least short. Personally I'm looking forward to Deadpool finally giving us an R rated superhero movie, but maybe that's just me. For the grownups there is plenty of comedy, and some epic-ly small fights. Paul Rudd is his usual charming, self-depreciating, and funny self, and Corey Stoll is a great bad guy. The crew Scott joins would have just been okay if not for Michael Pena. His over-excited almost spastic story-telling scenes were among the funniest of the movie. There's an appearance by one of the Avengers (not a really important one though so don't get too excited), but you'll see a few more if you stick around until the credits are over. Michael Douglas was much better then I remember him being in a long time, and Kate from LOST is good too. I know her real name, but she's always going to be Kate from LOST no matter how much she changes her hair. 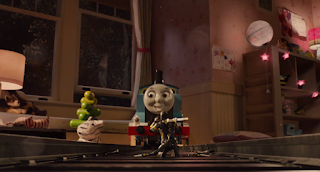 I left the theater thinking it was pretty good, but was kind of thrown off by the comparatively small scope compared to the more recent entries into the MCU. The more I thought about it though the more I liked it for that. It was exactly what Marvel has been missing lately. A story about a man who's a little uncomfortable with having superhero-dom thrust upon him. A man who isn't trying to save the world as much as he's trying to take care of his family. When the Civil War starts he'll be right there with all of the gods and monsters, but for now he's just a guy. If they had given some of the other Marvel heroes this much depth it might have made some of the other movies feel a bit more personal, and a little smaller.