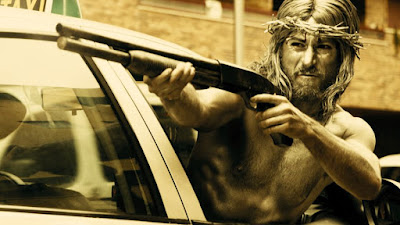 I am Devlin and this is the debut of my new movie review column. I've always been a big movie geek. My first real job was as an eventual assistant manager at Blockbuster, for those who remember those. I was there for 3-4 years and was given the means to explore the lesser known and less advertised underworld of cinema. I found a lot of films that blew me away and will forever be a staple of my collection, no matter how many different formats I will eventually have to buy. But in my search for these hidden gems I also encountered piles and piles of troll dung. I've seen some of the worst films ever made and hopefully some of my reviews will spare you such an experience. I also hope to expose you to some of the best you've never heard of. I'm sure I'll eventually review some more mainstream titles as well, but there are a lot of obscure films I'd like to get to first. Since this is the first review, I will start things off on a positive note. The first movie on the list is available on Netflix, which I'm sure most of you have access to. It is called:

I've had this movie on my Netflix list for about 6 months and finally got around to watching it this morning. The film was made in Spain in 2013 and is in Spanish with English subtitles. I figured it would be decent based on the fact that it was directed by Álex de la Iglesias, who also directed The Last Circus. I'm a big fan of The Last Circus and will likely review that one at some point.

The basic plot of this movie is that a couple of desperate, small-time crooks botch a simple robbery. While fumbling around and making their getaway, they end up with a couple of hostages. They try to make a break for the border, but before they get away with the loot they encounter a coven of witches. One way you could describe this film is, "what if Robert Rodriguez had directed Hocus Pocus?". Now I'm going to get into some specific details of the film and give a few thoughts on them. Beware, minor spoilers ahead.

As soon as the opening credits started to roll my hopes went higher. There were several art pieces flashing on the screen that looked like Gustave Doré's art. Towards the end of the opening credits there were images of various women of historical significance. It was certainly foreshadowing the theme of the movie and who/what the witches actually are. The film starts with an awesome heist job set in a section of town where people dress as different fictional characters to attract tourist. This makes for a very comedic robbery as Jesus of Nazareth, Spongebob, Minnie Mouse, The Invisible Man, a WW2 Soldier, and a schoolboy hold up a pawn shop and take a box of gold wedding rings. During the robbery, which goes all wrong, we find out that Jesus is the father of the schoolboy and he's robbing the shop to get money to pay off his alimony and try to get his kid back. The criminals immediately become protagonist as you realize that they're good people having to resort to bad choices. Even one of the robbery victims sympathizes with Jesus's situation and we're exposed to our first taste of gender issues as he claims that the court always favors the woman. Most of the team is gunned down or arrested by the cops, while Jesus, his son and the soldier escape and hijack a taxi.

This opening sequence really sets the pace and tone for the rest of the film. Action, comedy and strangely beautiful imagery. There's such a great shot of Jesus hanging out of a taxi window with a shotgun and shooting at cops. They take the taxi driver and his customer hostage and try to find a place to lay low. I really like how you get to know the hostages a little in the car. The customer in the back needs to get to a job interview and the driver needs to call his wife or she'll get pissed. It's obvious that their lives have been interrupted and they're not just hostage #1 and #2. The driver eventually sympathizes with their cause and helps them on their getaway. He even drops a good quote about the box of rings, calling it "a box of pain, misery and broken promises". These guys really bond over their past experiences with women.

From here we're about to enter into witch territory as they pass through some small town with bizarre people. We get to see how lazy Americans really are when one guy goes to drop a deuce at a restaurant they stop at. It's a foreign toilet that I've seen before but never in use. Basically there's a hole in the floor with grooves for your feet. You pretty much have to hold a squatting position for 10-30 minutes, depending on your degree of diarrhea or constipation. The design also guarantees an unsanitary mess. I've never been more grateful to have an American toilet.

We find out that these thieves are expected by three witches (grandmother, mother and daughter) and there is a prophecy they must fulfill using the stolen wedding rings and the boy. The men are lured to the witches mansion where they are seduced by the youngest witch. Jesus' wife is in pursuit, followed by two detectives.

The film gets really wild at this halfway point and we get to see all the witchy special effects. I've seen better effects for sure, but this film gets away with less than perfect effects due to its comedic tone. I won't spoil the ending completely, but there are a lot of witches and they come across as an extreme feminist group. They pretty much bash men in their scenes saying they're only good for their money. While the men are bashing women for being crazy and emotionally unstable.

The film is really just a big gender war and the witches are bitches, likely due to writer/director bias. I ended up liking this movie a lot. There's plenty of laughs, great action sequences, and not so subtle social commentary. I highly recommend this one , so go ahead and put it in your Netflix queue. It currently has an IMDB score of 6.4, but I would give it more like an 8.

Come back next time for a review of a film made in Serbia.

About Me: I have a couple of different aliases, but for this column I will use my middle name. I am Devlin and I currently reside in Atlanta, GA. 32 years of age and still feeling immortal. Former Rockstar, current Pro Wrestler and hell, I'm still a Rockstar at heart. I got my first taste of obscure cinema when I was about 8 years old. My Dad would take us to the video store every weekend to stock up on classic horror films to watch on his projector. They were mostly harmless, PG-rated horror films like the great Universal monster movies. Then one night he rented a movie for himself to watch after we had gone to bed. I was so intrigued by this film that I wasn't allowed to see. I begged and begged and he eventually caved. That night I was exposed to a film unlike anything I had seen before. Ever since that night I wanted to find more films that gave me that same sensation. I wanted to feel shock and disgust. I found my place in the Horror aisle. The film I watched was Faces of Death. Thanks Dad.
Posted by Phantom Troublemaker at 11:00:00 AM