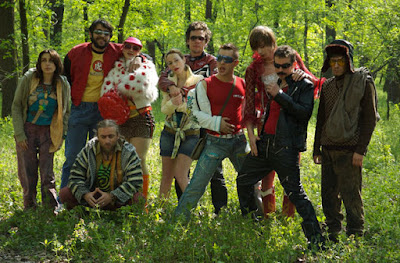 Welcome back to another installment of Devlin's Domain!

Last time I reviewed a film from Spain, and we're going to stay outside of the States for this one as well. I know some people have issues with subtitles, but personally I'd rather watch a quality film with subtitles than sit through a lot of the garbage that gets churned out by the Hollywood machine. It's not really just about quality either with foreign films. There's plenty of stinkers out there. I think it's important to open up to different cultures and ideas. If you're not willing or able to travel the world, then one of the best ways to understand a culture is through their art. I know plenty of xenophobic people who don't know and don't want to know anything outside of their everyday American experience. There's more to the world than just one country. We're all on this rock together, flying through space with no clear origin or destination. The least we can do is get to know and understand each other while we're on the ride. Coincidentally that's kinda what this films about. Let's get down to it shall we?

This is the second film I've seen from Serbia, the first being the infamous A Serbian Film. This film has a lower budget and the overall quality doesn't quite compare in my opinion. This is still, however, a damn good movie. It has a documentary vibe to it, similar to Kids or Gummo. That really works in its favor given the low budget. On the surface it's just a bunch of gratuitous sex and shocking violence. But a closer look shows that there's meat on those bones.

The sex is pretty graphic at times. Just in case you're offended by bestiality, *SPOILERS* one of the gang, who has an animal fetish, graphically fellates a horse. It gets pretty extreme so you can imagine some of the outrage that comes from the locals. In one scene the outrage is compromised by desire in a nighttime rape scene. It really shows the hypocrisy of the town and how their own sexual repression results in violence.

The rape along with the lack of money really drops the morale of the gang. They're almost to the point of giving up when they are approached by a man who offers them a good bit of money to make artistic snuff films. Some of the local families who are poverty stricken have resorted to self sacrifice in order to to provide for the rest of the family. Rich people are paying good money to see films of the poor being voluntarily murdered on camera. That sounds insane, but unfortunately it's something that happens in the real world in one way or another.

Desperate to survive themselves, the group reluctantly takes the job. The rest of the film shows how these snuff films affect the group's chemistry. At first it's a way to get revenge on the ones who wouldn't accept them. Murdering a nameless symbol of what you're against is one thing, but when you attach an identity and family to a person it changes everything.

Some of the gang can't handle what they've done and leave. I really found myself relating to this gang of outcasts. Not because of their actions, but because of who they were. They were misunderstood and going against the flow of normalcy. When they attempted to express themselves in search for acceptance they were greeted by more hatred.

The politics are heavy in this one and I don't think we in the States can appreciate it as much since we're not too familiar with Serbian life. You really get a glimpse of how far people will go to survive in a state of extreme poverty. I'm curious how well the people of a war torn country like Serbia handled looking into this black mirror.

There was enough shock and gore to get me interested, but I was pleasantly surprised to find some substance in the chaos. The acting isn't top notch, but it's believable. The filming style works really well and kind of puts you on tour with them. I would definitely recommend giving this one a go. It is currently rated as a 6.0 on IMDB which is pretty high for a movie that could offend just about everybody.

Luckily I'm never offended by art and I give it an 8.0.

I'm thinking I may bring it back to the states next time. Maybe something old....Something horrific...Something Sam Raimi.

- Devlin
About Me: I have a couple of different aliases, but for this column I will use my middle name. I am Devlin and I currently reside in Atlanta, GA. 32 years of age and still feeling immortal. Former Rockstar, current Pro Wrestler and hell, I'm still a Rockstar at heart. I got my first taste of obscure cinema when I was about 8 years old. My Dad would take us to the video store every weekend to stock up on classic horror films to watch on his projector. They were mostly harmless, PG-rated horror films like the great Universal monster movies. Then one night he rented a movie for himself to watch after we had gone to bed. I was so intrigued by this film that I wasn't allowed to see. I begged and begged and he eventually caved. That night I was exposed to a film unlike anything I had seen before. Ever since that night I wanted to find more films that gave me that same sensation. I wanted to feel shock and disgust. I found my place in the Horror aisle. The film I watched was Faces of Death. Thanks Dad.
Posted by Phantom Troublemaker at 4:00:00 PM