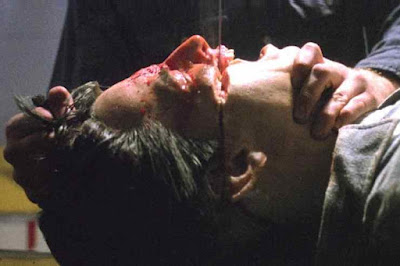 There's plenty of 80's blood and guts on this week's edition of Devlin's Domain. I'm bringing it back to some old school, classic, slasher movies this time.


When I was just a wee lad I used to catch the Friday the 13th marathons on USA Network. I became a huge fan of the slasher genre when I was younger and was pissed that I had to settle for the watered down, censored versions provided by cable T.V. Eventually, once I entered my teens, my Mom started renting me all the R-rated versions of the movies. They were filled with all the boobs and blood that I was always craving. I moved on to Halloween, Nightmare on Elm St. and others. Of course these are biggest and most well known of the genre. There were a ton of others trying to cash in on the boom of the slasher flick. Most of those films didn't get very far in terms of building a fan base that would merit sequels. This week's movie is one of those:

This film was made toward the ass end of the heyday of slasher movies. The selling point is that it 'stars' Sam Raimi and Bruce Campbell of Evil Dead fame. Unfortunately, that is a deceitful attempt to market this movie. If you blink for a second you'll miss Bruce Campbell's cameo. Sam Raimi I has a slightly larger role, but to call him the star is a huge stretch. 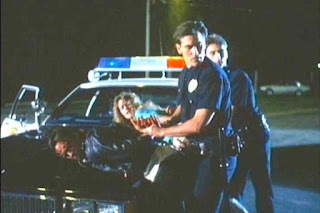 The film looks pretty dated, not surprisingly. I was under the impression that it predated Evil Dead, but it was actually made about 8 years after. This wasn't a negative part of the viewing experience for me though.

The movie follows the night shift of a doomed grocery store in Detroit. The store itself is abysmal. In some scenes it seems like a tiny, Podunk market. In other scenes it seems so vast that you could never find your way out. It definitely doesn't feel like you're in Detroit, more like Alabama.

Right from the beginning of the film you start to get introduced to characters that are so obviously the killer that they're obviously not. This may have worked in 1989, but I think we've all learned these tricks. There's the crazy boyfriend of the cashier that they really push as the main suspect. I guess it builds a dreadful tone and let's you know that somebody's about to get killed about halfway through the film. I personally thought they were trying too hard and I was getting bored while waiting impatiently for the bloodshed.

So this grocery store is about to close down for good, and the employees are going to lose their jobs. Before the last shift is over, someone is going on a rampage and killing off the employees one by one. The part of the movie I like is the use of the grocery store as a weapon. Killing people the same way over and over again the same way can get kind of lame. Whether it's a machete or a chainsaw, it's only cool a few times before you need to switch it up. This killer uses environmental methods of murder. People get killed by meat hook, buzzsaw, trash compactor, etc. It's pretty bloody graphic and violent as well. It doesn't look totally realistic but it's decent for the time and budget. 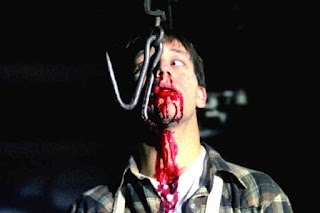 There's a laughable chase scene toward the end of the movie. It just seems ridiculous to me that everyone could've been killed without anybody else noticing. Customers are nowhere to be seen most of the time. It's no wonder this place is closing if this reflects their usual store traffic. The whole thing is pretty ridiculous. I know most slasher movies have these kinds of problems, but for some reason I just couldn't stand this one. 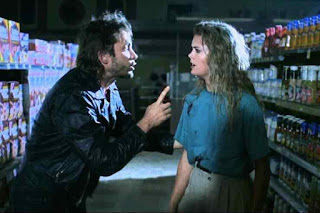 Apparently this a bit of a cult classic. Not sure if people are just attracted to it because of the Raimi and Campbell appearances or if it's just better than I'm giving it credit for. It managed to score a 6.3 on IMDB which is decent for a film like this. I just found it full and uninteresting. The death scenes weren't enough to save it for me. Maybe if I had seen it back in the day I may have appreciated it more, but today it gets a 5.0.

That's it for this week. Next time I'll be covering a film about the Cuban Revolution. Juan de los Muertos.

About Me: I have a couple of different aliases, but for this column I will use my middle name. I am Devlin and I currently reside in Atlanta, GA. 32 years of age and still feeling immortal. Former Rockstar, current Pro Wrestler and hell, I'm still a Rockstar at heart. I got my first taste of obscure cinema when I was about 8 years old. My Dad would take us to the video store every weekend to stock up on classic horror films to watch on his projector. They were mostly harmless, PG-rated horror films like the great Universal monster movies. Then one night he rented a movie for himself to watch after we had gone to bed. I was so intrigued by this film that I wasn't allowed to see. I begged and begged and he eventually caved. That night I was exposed to a film unlike anything I had seen before. Ever since that night I wanted to find more films that gave me that same sensation. I wanted to feel shock and disgust. I found my place in the Horror aisle. The film I watched was Faces of Death. Thanks Dad.
Posted by Devlin at 6:53:00 PM