CD Review – Doctor Who Unbound: Sympathy for the Devil 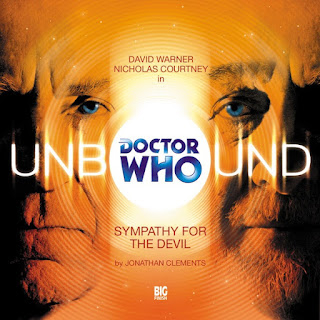 The year is 1997, and a stranger arrives in Hong Kong, decades later than he thought he would be returning to Earth. It’s the eve of the Handover, the return of Hong Kong to China, and the Doctor finds a world that’s had to survive without him for the last few decades, and it’s a world that is not the better for it.

An advanced Chinese stealth bomber, capable of flying while completely invisible, crashes into the Hong Kong countryside, sending the Doctor in pursuit of a mystery. Along the way he finds an old friend who is desperate to forget the horrors of his own past, a disgraced version of U.N.I.T. led by a less than ethical commander, and an old enemy as trapped on Earth as the Doctor now is.

And in the midst of it all, an ancient evil is awakening…

I’m still surprised by how often I come across Who fans that are completely unaware of the audio adventures of the Doctor as produced by Big Finish. It’s not even fanboy wonderment by someone who collects everything Who (I don’t) while looking at others who don’t, but rather just based on the fact that the various Who stories they’ve done are so damned good.

When Big Finish got the license to do Doctor Who, the original concept was to have the actors who played the classic Doctors give life to new stories, fully dramatized, full cast audio adventures that were to take place in between the established television adventures. As time went on they also added Paul McGann’s Doctor into the mix as well as original adventures featuring the various companions and villains. Then they created Unbound.

The concept for this series of stories was a fairly simple one. They would write a series of Doctor Who stories featuring Doctors that had never existed before and who might even not be based on concepts found in the strict Who cannon. One story looked at what might have happened to the Doctor and Susan had they never left Gallifrey. One story had the Doctor as a woman (played by Arabella Weir) following her adventures as she hides out from the Time Lords on Earth after the War Games rather than having been caught and punished. Still another looks at what would have happened if the Valeyard had won the Doctor’s regenerations after The Trial of the Time Lord, and still another got really weird and meta by looking at what would have happened had Doctor Who not made it to TV.

While they and a couple of others in that line were all interesting and enjoyable to greater or lesser degrees, there was one that for me absolutely fired on all cylinders and told a great alternate universe Who story. That would be Sympathy for the Devil.

For this Doctor, his story picks up immediately after his forced regeneration by the Time Lords at the end of The War Games. But rather than landing on Earth, in England, in the 1970’s, he ends up in Hong Kong in 1997. Confused by at least momentarily thinking he was where and when he had been originally intending to be, as well as seeking what answers he can find, the Doctor follows a couple of strangers to a small pub run by a former English Brigadier hiding from his old life. His name is Alistair Gordon Lethbridge-Stewart.

The Doctor gets Lethbridge-Stewart alone and learns what the world has been like without him, the devastation caused by event after event that the Doctor was not there to prevent. During their talk an invisible plane carrying a scientist named Ke Le crashes into the hills of Hong Kong while trying to sneak out of China. This unusual event brings U.N.I.T. into the picture, and the Doctor learns that U.N.I.T. isn’t the organization that he remembers and that former Brigadier Lethbridge-Stewart and U.N.I.T. aren’t on the best of terms.

From that point forward, everything spins out of control, and it’s up to the Doctor to save the world.

Sympathy for the Devil is an amazingly tight little standalone story by Jonathan Clements, and it benefits with regards to accessibility for those uninitiated or just newly initiated in Who fandom from not being too strongly tied to the classic or contemporary Doctor Who continuity. The technical aspects of the production are absolutely top notch. The music and sound FX are deep and rich, creating a very full and real sounding world for the actors to inhabit.

The cast assembled for the production is amazingly talented, and perhaps none more so than the Doctor himself, David Warner. David Warner’s résumé is stacked with iconic genre performances on both the big and little screens, and he gives everything here that he’s given in many of those past performances. It’s the type of performance that makes you feel stirrings of regret that Warner didn’t officially take on the role at least once in the 50 years of the show’s television history.

Nicholas Courtney is at the top of his Lethbridge-Stewart game, bringing a slightly different take to the character that reflects the darker history he’s lived through. This is a Lethbridge-Stewart who has seen everything he once stood for crumble, and Nicholas Courtney plays him with a jaded weariness while still keeping true to the character we’re all familiar with.

Mark Gatiss (now of Sherlock fame) plays the dark and mysterious Ke Le, a “scientist” responsible for the monstrous, mind controlled killers known as the Ke Le Divisions. He plays the character with an unnerving calm for most of the story, as well as playing him as a perfect foil for the Doctor.

***** Spoiler about Ke Le. Highlight the text with your mouse to see. *****
I was thinking about not mentioning this one since someone unfamiliar with Big Finish might actually be surprised, but even their website (where you have to go to order the thing) spoils it these days despite the lengths they once went to in order to hide both the actor’s true name and the character’s big reveal. Ke Le is actually the Master.
***** End spoiler about Ke Le. *****

Oh, yeah... And then there’s some guy named David Tennant playing the head of U.N.I.T., Colonel Brimmicombe-Wood. Coming out just two years before he became the Doctor on television, it was neither his first nor last work for Big Finish’s Doctor Who line. He plays the character with a great bit of gusto, making him a jerk that’s still rather enjoyable to listen to. He and Nicholas Courtney also play off each other rather well in the story.

Sympathy for the Devil is an amazingly good story, and you’ll enjoy it whether you’re a longtime fan or new fan of old Who, new Who, or all of Who. While the story does play off of some established classic Who history, it’s building its own world here. It uses the references to the past in ways that you don’t actually have to know the specific details of the referenced Who stories to understand or appreciate what the events in them mean to this story.

Sympathy for the Devil is easily my favorite of the non-cannon Doctor Who stories out there as well as one of my favorite Who stories in general. It’s a story that even ten years after my first hearing it I can still listen to and enjoy every bit as much as the first time. The story itself is a standalone on a single CD, but it does end in a way that opens the door to additional stories (and at least one other was recorded.) You can find it for a very nice price at the Big Finish website here in both CD and digital download formats.

Buy it. Listen to it. If you’ve liked any versions of Doctor Who that you’ve previously encountered, you’ll really enjoy this story.
Posted by Unknown at 11:00:00 AM