Why G.I. Joe is the Greatest Toy Line Ever by Jeff Francis

Over the last few decades, there have been many fine toy lines produced that have fueled the playtime of children and the collecting obsession of adults. Many of these toy lines are based upon hit movies or popular comic books or cartoons. Some would argue that Star Wars was the greatest toy line every conceived, whilst others may point at He-Man and the Masters of the Universe. Fans of robots will argue for Transformers, but all of these options are wrong. There is one toy line that stands head and shoulders above all else: G.I. Joe. While the franchise has had its ups and downs over the years, no other toy line has come close to the sheer awesomeness of G.I. Joe. Join me in The Pit as we examine why G.I. Joe is the greatest toy line ever.


G.I. Joe had a somewhat humble beginning way back in 1982. The original G.I. Joe was a true boy's action figure, standing a full 12" tall and loaded with accessories. Hasbro singlehandedly created the action figure format for boys by copying the Barbie formula for success. This formula is the razor/blades theorem that states that while a person will buy a new razor from time to time, they'll spend far more on blades for that razor. Thus the concept of selling a basic figure that kids could buy along with endless packs of accessories for that figure was born. The original G.I. Joe was incredibly popular, but interest began to wane as the 1960s came to a close. War toys become less popular when a real war is being fought, so the line was retooled to make soldiers into adventurers. Eventually, the line faded until resurrected in the 1980s.


The G.I. Joe of my era is the lovable 3-3/4" figures of the A Real American Hero line that began in 1982. The first year saw the release of eleven carded figures, four vehicle drivers, and one mail-in. The toys immediately began to fly off the shelves (and I know because I was one of those trying to grab them!) and the line surged for over a decade. The timing of bringing back G.I. Joe under the A Real American Hero banner is our first reason for why this line is the best one ever. Just like a movie can capture the essence of an era, so too can toys. G.I. Joe captured the mood of America in the early 1980s. The cynicism and malaise that seeped into the society during the Vietnam War and the Iranian Hostage Crisis had been swept away by a patriotic fervor as Ronald Reagan moved into the White House. America began to confront evil around the world through an aggressive buildup of military defense, and this new reality can be seen in the G.I. Joe toy line. Americans were once again the good guys, preserving freedom and liberty through the use of superior firepower.

The first few years of G.I. Joe: A Real American Hero successfully merged the slightly sci-fi with military realism. The Joes (Zap, Grunt, Duke, Stalker, Snake Eyes, etc.) were all experts in real military weapons, as shown on their file cards. (Fun fact: how many people today would recognize what the Warsaw Pact was? Many of the characters were expert in all the standard firearms for both NATO and Warsaw Pact nations.) Kids could easily imagine the many vehicles (tanks, jeeps, and planes) setting off into action on the modern battlefield. The two coolest planes of the entire line, the Rattler and Night Raven, were obviously based upon the A-10 Warthog and the SR-71 Blackbird. My father really loved seeing my Night Raven as he loved the Blackbird. He worked for Pratt & Whitney who made the engines for the plane. Sadly, as the years went on, the figures and vehicles became more fantastical, to the detriment of the franchise. (And no, I will not discuss the Cobra-La figures as they do not exist!) 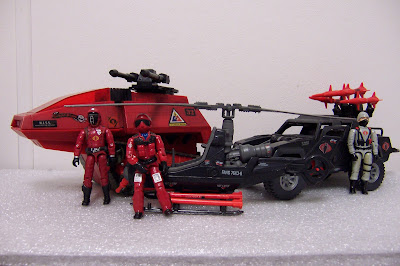 Another reason why G.I. Joe: A Real American Hero is the greatest toy line ever is quite simple - the toys themselves! There were so many figures and vehicles released that it's almost impossible to have them all. During the initial run between 1982 and 1994, there were over five hundred individual figures created and over two hundred fifty vehicles and playsets. That's a staggering amount, and what's even better is that they all came with a personality. One of the great joys of the G.I. Joe line was clipping and saving the file cards for each figure. Larry Hama (praise be to him!) wrote the cards and give each toy an individual personality. My personal favorite is the one for Major Bludd: "When you're feeling low and woozy/Slap a fresh clip in your Uzi/Assume the proper firing stance/And make the suckers jump and dance!" The cool factor for that is off the charts! Those little tidbits fleshed out the character of each toy and made them more real to us.

As for the figures themselves, they were incredibly poseable (especially after the first year) when compared to other lines like Star Wars. The figurers came with a quite a few cool accessories, such as guns, backpacks, helmets, and other assorted gear based upon the character's specialty, such as Snow Job and his skis. Of course, having accessories to scale meant that quite a few were lost, but Hasbro fixed that problem by releasing accessory packs for us to pick up in order to restock and reload. The figures were quite detailed for their time, with harnesses, holsters, grenades, and other details included. For those looking for equal opportunity playing, there were a number of female Joes and Cobras released. You know Scarlett was totally bad-ass because she only needed a crossbow to fight! To top it all off, you had some really cool subgroups available: Slaughter's Marauders, the Dreadnoks, the Iron Grenadiers, Night Force, Sky Patrol, and so on. The use of the sub-groups allowed for some greater individuality and the inclusion of a really great theme. My two favorites are the Dreadnoks (obviously inspired by the Mad Max films) and the Iron Grenadiers (more of a European-style aristocratic mode).

Now let's get to the brass tacks of why G.I. Joe: A Real American Hero runs roughshod over every other toy line. The vehicles and playsets released were absolutely amazing, and the sheer number is staggering. Yeah, you could pick up a land speeder, an X-Wing, and a Tie-Fighter for Star Wars, but G.I. Joe gave you an almost endless parade of jeeps, tanks, planes, boats, helicopters, cars, and playsets. You knew you were the envy of the block when you rolled up with the Whale, the Tomahawk, or the Vamp. Then there's the holy grails of the line (that I never had): the Defiant (space shuttle), the Cobra Terror Drome, and the USS Flagg (that measured seven feet!). I once met a guy that had two Flaggs in his house, and I almost wept. What ever toy line gave you a vehicle that you could use as a coffee table in your home? The point is that the range of vehicles was amazing, and the fact that many of them came with drivers made them even better. Wild Weasel is still one of my all-time favorite figures.

Lastly, G.I. Joe is the greatest toy line ever because of Cobra. Every good guy needs a bad guy to do battle with, and the quality of that bad guy determines how great or sorry the hero is. Well, G.I. Joe won the lottery with Cobra as they're the coolest evil guys ever. Yes, I say that they're cooler than the Empire in Star Wars. As soon as I saw my first Cobra Trooper wearing his balaclava (which makes them anonymous, and, thus, more threatening), I was hooked. The line of Cobra figures is a veritable textbook on how to create cool and bad-ass villains. The original Trooper, Scrap Iron, Copperhead, Stinger Driver, Firefly, Baroness, Snow Serpents, Vipers, Lampreys, the Crimson Guard, Eels, B.A.T.s, Alley Vipers, and so on are just magnificent. Then there are the Cobra vehicles: Hiss tank, Stinger jeep, Rattler, Night Raven, Water Moccasin, Moray, Imp, Maggot, and Rage. I don't know why, but evil always seems to have the best fashion designers and fabricators. Is there a cooler figure than the Crimson Guardsman? The quick answer to that is no. 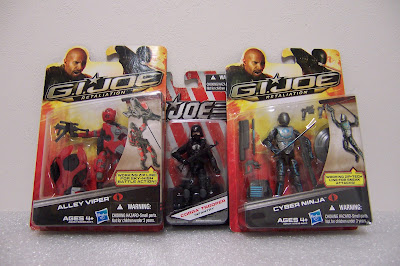 As you can see, there are a variety of reasons why G.I. Joe: A Real American Hero is the greatest toy line ever. First is the staggering number and range of individual figures, vehicles, and playsets. Whether you wanted to fight on the land, sea, or air, you could do so with ease (and a bit of money) with this line. The toy line was grounded in reality, but included enough sci-fi to ensure that children weren't bogged down with the gruesome reality of war. Each character had their own distinct personality care of Larry Hama and his file cards, and the launch of the toys coincided with a renewed sense of patriotism and optimism for the United States. (There's a reason why Red Dawn was made in the mid-1980s.) There was even the collecting aspect of clipping and saving flag points to send away for mail-in offers. I still remember getting the original Cobra Commander with my hard-earned points. I didn't even have to bring up the topics of the cartoon show or the excellent comic book to illustrate how incredible the G.I. Joe line is. The entire A Real American Hero toy line stands on its own staunch two feet as the best toy line ever. Star Wars may have had a coupe of Jedi, but G.I. Joe had ninjas!

Jeff Francis has been a lifelong geek, be it for toys, comics, Star Trek, D&D, classic horror, or Doctor Who. He once owned a game shop for over a decade and has been an online gaming journalist for over seven years by the moniker of Jeffprime. You can visit his personal website at Starbasegeek.com to read more of his mad ramblings.
Posted by Phantom Troublemaker at 11:00:00 AM