Toy Review – Pop! Robby the Robot and Robot B-9 from Funko by James Palmer 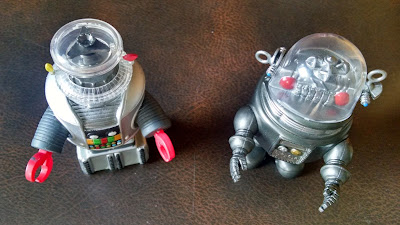 First off, let me just say thanks to Phantom Troublemaker for inviting me to write this guest post. The invite was quite timely, as I have been jonesing to write this post just so I could tell everyone how awesome these figures are.


I’m talking, of course, about the Funko Pops Robby the Robot and B-9, or GUNTER (for General Utility Non-Theorizing Environmental Robot), from Lost in Space. I have wanted these two figures for a while now, and when I saw them in the dealer’s room at TimeGate last weekend, I knew I had to take them home, by any means necessary. I ended up just giving the guy a twenty. 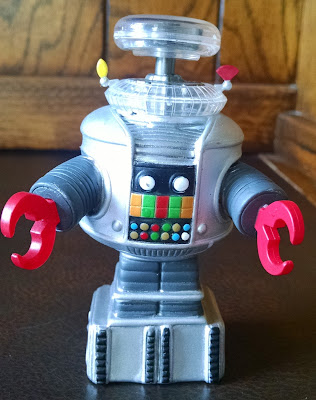 Funko, for the uninitiated, has taken the concept of the classic bobble-head and made them geeky, with licensed figures representing everything from Marvel and DC comics to Disney and Game of Thrones. All at prices that don’t require a second mortgage on your man cave. I own two other Funko Pops figures, the Silver Surfer and General Ursus from the original Planet of the Apes, and both are fun and look great in my writing cave. But the Robby and B-9 definitely crank it up a notch in my opinion.

The Pops figures are basically caricatures, with big heads and smaller bodies, but the aesthetics of the line really lend themselves to the look and feel of these classic robots. B-9 looks just like the film version, with realistic paint. The torso also rotates 360 degrees, just like it did in the show, which I thought was a very nice touch. The paint job is good over all and, while there are a few minor defects in this department, it makes this a one of a kind figure in my mind. 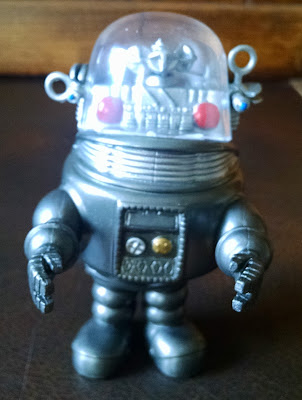 Robby’s dimensions are a bit more exaggerated than B-9—the upper body is more rounded and squat, the dome less egg-shaped—but somehow it works. Robby’s torso also rotates 360 degrees, but this wasn’t a prominent feature of the original Robby suit. What did turn was the robot’s head, which this figure can’t do, but that’s a minor quibble, as everything else looks great. The paint on Robby looks really good. 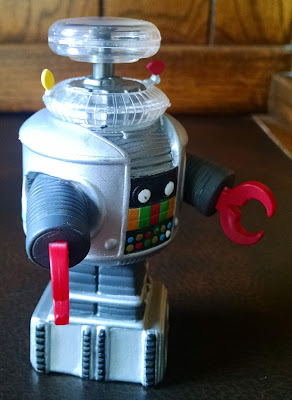 Robby the Robot and B-9 are my favorite movie and TV robots, with Robby easily taking the lead. I encountered him off and on during my childhood, from the Lost in Space episode “War of the Robots,” to bit parts in other TV shows and films like Gremlins, and finally to Forbidden Planet, which has become one of my favorite classic science fiction films. B-9, or the Robot as he was called on Lost in Space, had color and whimsy, brought to full life by actor and stunt man Bob May. It’s no wonder these two robots hold such a special place in my heart and look so great sitting together on my desk, since they were both created by the same man, the late Robert Kinoshita. 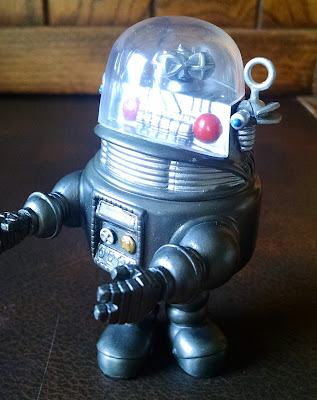 Even if you’re not into the other Funko Pops vinyl figures, if you’re a retro robot fan, you’ll want Robby and B-9 for your collection. They lend a touch of retro chic to any office, den, or geek man cave and, when no one’s looking, you can re-enact your favorite moments from War of the Robots to your heart’s content. My only wish now is that Funko will release these as Kenner-style action figures for their Re Action line of action figures.


James Palmer is an award-nominated writer, editor and publisher of science fiction and pulp adventure best known for the alternate history giant monster anthology Monster Earth. He is a frequent guest on podcasts such as ESO, The Revolution SF Revcast, and the White Rocket. When not writing, he can be found watching Daredevil on Netflix. A recovering comic book addict, James lives in Northeast Georgia with his wife, daughter, two dogs, and a metric crap-ton of books. For retro reviews and other foolishness, visit www.jamespalmerbooks.com.