TimeGate - A Convention We Will Never Forget by Robert McIntyre 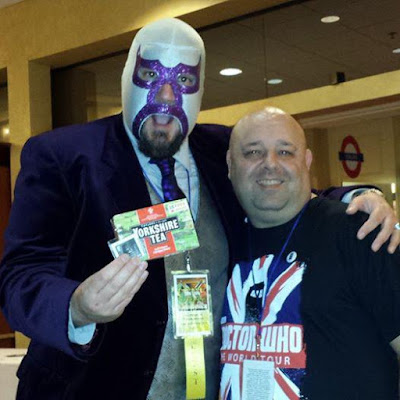 From the day I walked into my first comic convention in 1994 I have been hooked. I love everything about them, the chance to meet like-minded people to talk geeky things along with the chance to see my favourite artists and writers. I am like a kid in a sweet shop. Now, over the years conventions have changed considerably; mostly for the better, sometimes not so much but that’s for another post. The two things that haven’t changed is my love of going to the conventions and my ambition to go to a convention in America.

Well this year my ambition was meet when my wife and I attended TimeGate a Doctor Who and sci-fi convention in Atlanta. There were several reasons for picking this convention over the many others that take place within the States. The first is I love Doctor Who, in fact I cannot remember a time when Doctor Who wasn’t a part of my life in one form or another. Another is that TimeGate is a smaller, more intimate type of convention than some of the ones that currently take place in the States. And as my wife Helen is not a big fan of large crowds I saw TimeGate as a good starting point (note the word starting point) to dip my toe into the American convention circuit. Lastly but most importantly TimeGate is attended by people who, through the wonders of the internet, podcasts and Facebook I now call friends.

So on the 22nd May we had an early 06:30 start to the airport to catch our 8 hour flight to Atlanta. After a none too eventful flight and a particularly fast check-in through immigration we were on our way to our hotel. Due to our lack of knowledge of the Atlanta area we had decided to stay at the Marriott Century Centre where the convention was been held, which on reflection was an inspired choice as the hotel was one of the better ones we have stayed in during our visits to the States. We had no complaints about our room, the main reception area and lobby was huge so anyone that wanted to mingle could do so, the hotel restaurant had a good selection of food although it was hotel prices and more importantly the bar had a good selection of beers, sprints and cocktails although again they were hotel prices but that’s to be expected.

Once we had settled in and had a drink (coffee) we went and stood in line for registration which was very quick and efficient. I was presently surprised to see people already in costume hanging around the bar and lobby areas as there were still a few hours until the convention started.

TimeGate ran from the Friday of Memorial day weekend through to the Sunday evening and there were various panels and events running throughout the weekend, surprisingly some of which ran past 11pm which to me is unusual as most UK conventions wrap up around 5pm. There were various guests all who had tables throughout the convention area with a dealers room close to the main hall, the two main guests were Katy Manning - who played Jo Grant when Jon Pertwee was the Doctor - and Michelle Gomez who plays Missy (The Master) in present day Who. Katy is completely mad in the most delightful way you can imagine and is one of the most active people I have ever met. During her signings Katy hugged everyone who came up to her table and took the time to talk and interact with everyone that was there. As someone who has stood for signings and has had varying degrees of disappointment after meeting the person I waited to see, Katy was a refreshing change to what is sadly becoming the norm with some convention guests. Katy’s enthusiasm to hug all those around her wasn’t just confined to her official appearances, as she walked throughout the convention and hotel she would stop, talk and hug anyone who spoke to her. She was a whirlwind that didn’t stop and it was great to see. I sat in on her first Q&A on the Saturday and as I expected it was a fun filled hour as Katy talked about her time on the show and answered questions from various people at the convention as she sat on the edge of the stage to better see the people asking the questions. The hour flew by as Katy moved around the stage in various stages of excitement sharing stories about her time on the show, and when she recently visited the TARDIS set and met the current Doctor Peter Capaldi. She was a wonderful guest and a delight to meet.

Michelle Gomez was also a great guest and for someone who was doing their first convention she seemed very comfortable with the fans she met. Michelle chatted to both of us while signing a photo of herself as Missy and asked if we lived in Atlanta as we had English accents. She seemed quite surprised when we told her we had flown in from the UK and was kind enough to wish us a safe journey home when we returned; Michelle’s Q&A was also great fun and like Katy’s one hour didn’t seem long enough. I had also booked a photo with both Katy and Michelle together which was very entertaining and to Helens delight Michelle waved at her as Helen watched me pose. Later on that day (Saturday) we were sat in the lobby as Michelle was leaving and she turned to us and said ‘’goodbye England’’ which we thought was fantastic.

Over the course of the weekend we attended various panels from Red Dwarf to the Marvel Cinematic Universe (MCU), there was even a Downton Abbey panel on Saturday night, which was a surprise but given the Brit theme of the convention it didn’t seem out of place. Helen attend the Ask a Brit panel on her own as I was in line waiting to meet Katy, she apparently did quite a good job defending the National Health Service when it was been criticised by one expat. I found her in the hallway after the panel talking with convention guest Stephen La Riviere, Stephen told me she was quite right in her defence of the NHS and she had been a good contributor to the panel; I was so proud of her.

The highlight event of the con for me was the Earth Station Who (ESW) live podcast which was held in the main hall on Sunday afternoon. ESW were celebrating their 100th show and I was beyond excited to be able to see the guys record their podcast while I sat there watching it. Mike, Mike, Jen and Phantom Troublemaker were on top form as they talked about the Master and his relationship with the Doctor. They seemed so at ease as they sat there talking and encouraging audience participation you would have thought they did live shows all of the time, at the end of the podcast Phantom revealed that after 3 years he was leaving ESW. This on a personal level was disappointing to hear as all the hosts on ESW complement each other so perfectly. Given the success of his own podcast and blog (Needless Things) it wasn’t too much of a surprise but I shall miss him when I listen to the show. 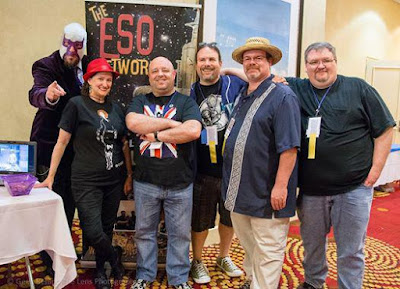 As I said at the top of the post a big reason for picking this convention was the chance to meet people I had become friends with through Facebook and podcasts, it was something I had been looking forward to ever since we made the commitment to go. Now they say (whoever they are) that you should not meet your heroes or people you look up to as you will be disappointed, well this wasn’t one of those times as everyone we met was so friendly and welcoming that I was totally blown away. The ESW guys Mike Faber, Mike Gordon, Jennifer Hartshorn and Phantom Troublemaker could not have been friendlier if they tried, I was a little nervous about meeting them all but right from the off it was like meeting old friends and I now know it's hugs not handshakes when I meet those guys again. I met and talked with them all at various points throughout the weekend and was grateful to them all for their time. The bar area was a great place to meet and I managed to have a long chat and a drink with Mike Faber and his lovely wife Judy on Saturday night. We also met and talked with Phantom at various points during the convention and I have to say I was big fan of his before we met. I’m even more so now, I love his honesty and passion for all the things that fall into his wheelhouse and the time we spent together talking helped make my weekend. We were also delighted to be invited to the ESW meal on Sunday night at Pallookaville in downtown Atlanta, I had a corndog with a bourbon milkshake, side order of cheesy chips and mac & cheese. It was a fantastic night and I would recommend Pallookaville to anyone who visits Atlanta. We finished the night off with a visit to a comic store called The Book Nook where I spent a few dollars on some excellent Batman Legends figures. It was a great end to what had been a tiring but brilliant weekend.

At the convention I also had the opportunity to meet and talk with author Bobby Nash whose books I have read for a while now, and having bumped into him in the bar area on Friday evening he came over and sat down to talk with Helen and myself. We talked for around 45 minutes about his writing, books, films and TV shows it was a great start to our convention weekend. On the Saturday I took the opportunity to buy some more books from Bobby which he kindly signed along with some that I had brought over with me.

Mark Maddox is an artist I had long admired so I was overjoyed to be able to buy some prints of his artwork and a sketch card he had brought along. I had some great conversations with Mark and I will definitely will be keeping in touch with him going forward (he said I can - I’m not stalking).

All in all TimeGate was an absolute blast for us and the only time I felt disappointed was when it was over. The convention is extremely well organised with panels and events that are very well advertised and ran with military precision. If you enjoy going to conventions and have the opportunity to go to TimeGate I would encourage you to do so - you will not be disappointed.

On a personal note during our time at TimeGate we meet great friends for the first time both old and new, and to be honest we met more people than I have had the chance to mention on this post. We have memories from the weekend that we will cherish forever, and we thank everyone for their friendship and the kindness shown to us.
Posted by Phantom Troublemaker at 11:00:00 AM