So You Think You Can't Write 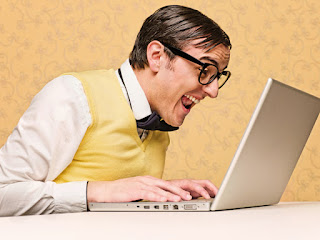 I've been writing for a long time. Not all of that was good (if you happen to consider what I do now any good), but I've come a long way from my mopey high school poetry. Despite being published in a few obscure, pretentious journals and magazines I gave up my dream of being a poet laureate many years ago. I never stopped enjoying writing though. It's just that once I grew up enough to realize it was time to put the poetry down I didn't have any other outlet for my desire to write.
Then my friend Noel started a site called Movie Criticism for the Retard (which has been reborn as Dork Droppings), and I started writing again. Generally, it was me and Captain Wow writing drunken movie reviews (our review of Zombie 4 is incomprehensible. It's still in his archives if you want to see what I'm talking about. Fair warning: it's extremely stupid, but we thought it was hilarious at the time). I wasn't really doing anything amazing even when I was coherent, but I was writing again. Then I got busy with life and work and shit, and it kind of fell by the wayside. I missed it, but didn't have the time or wherewithal to start my own thingy. So for about six or seven years there was nothing for me to do.
Then a few years ago my old pal Phantom messaged me telling me that I needed to start writing again, and had a place for me to do it. And since his site wasn't just movie reviews I had the freedom to write about anything I wanted. As a person with more loudmouth opinions than I can contain that was super appealing to me. I mean, I started back up by writing movie reviews, but then I was able to start writing about video games, and any other random crap I that popped into my head. And since I didn't say anything too stupidly crazy I was eventually given access to the site so that I could post my gibberish whenever I wanted. People seemed to be reading what I wrote, and even if it was only my friends it was still more of an audience I had when I wrote crappy poetry. And I've gotten to do a ton of cool stuff because of this. Convention media passes, a celebrity interview (if you consider Timothy Zahn a celebrity. You totally should if you don't already), and there are maybe even three or four people out there who aren't my friends who read this crap that I say. The best part of all of this though is when people want to talk to me about things that I've written.
I hear things things like "good story" or "that was funny", but most often I hear something along the lines of "I wish I had time and/or motivation to write stuff". Well to all of you who think that you, for one reason or another, can't write I'm here to tell you that you can. I'm not going to go so far as to tell you that everyone has a novel in them. They don't, and I don't want to be the person who tells you that you have the next great American novel inside you. I don't know you or what you have inside you, and I don't want to be held responsible if you don't even have the next bad Bulgarian short story inside you. I've got enough going on without the pressure of your disappointed dreams on my hands.

I may occasionally turn a phrase or toss out a good pun, but I sure don't have a novel in me. I probably don't even have that Bulgarian short story in me. My poetry is derivative, and that's the only thing I was just under halfway good at before I started being snarky for a living. Well, being snarky for free. Which I have kind of been doing all my life, but without an audience. Okay, maybe I still don"t really have an audience. Whatever, I'm moving on. The point here is that I realized that I'm good at being a nerd and writing commentary about the nerdy things I love. I'm not going to write a novel, but I can write a scathing review of the novel you write (if it sucks, that is). Just like those who can't do teach, those who can't create criticize. I seem to have found my niche, and I'm pretty darn happy with it.
The point of all of this is that you too can probably write about something. Think you don't have time? When I'm on a roll I can knock out an article in an hour. Sometimes I'll just sit and make notes about an idea while I'm watching tv. There have been plenty of times when it's taken me longer to find the right pictures than it has to write the actual post. I am trying hard to put something up every other week. That's usually a few hours making notes during the week, and typing it all up over the course of another few hours. You can't seriously be so busy that you don't have four or five hours to spare in a week. And you don't even have to do that much if you don't want to. You can post once a month like I was doing or even every few months like I did when I got into a writing funk. Even us fake writers get fake writer's block sometimes. Just find a subject that you're passionate about, and say whatever you want (unless it's about politics, religion, or Nicholas Cage. The Nicholas Cage thing isn't Phantom's rule I just don't want to encourage any more dialogue about him than already exists). You don't even have to be "a writer". We can help with editing if you need it. Or rather, I'd be willing to help since I don't want to volunteer Phantom's precious little free time.

Don't think you're funny? Who cares? I don't remember funny ever being a prerequisite for commentary. You don't have to be funny. Sometimes I am, and I consider myself lucky when I happen to score. But then, I'm also into being snarky. It's totally fine if that's not your thing. It wouldn't be a very interesting site if we all wrote about the same stuff in the same tone. It would just go back to being all Phantom all of the time if he wanted it to be that way. The more guest writers, the less work for him. Or the more time he gets to spend playing with toys that he might want to write about. He's been doing panels, I'm hoping to do more interviews, and that leaves a whole lot of other ground to be covered by someone else out there.
But even if you don't want to commit that kind of time or dorkery there's still a place for you. Whether you decide you want to contribute here or start your own thing, just write. Don't worry about anyone else seeing it. There are a bagillion blogs out there, and my little rambling on one will not make a difference to the internet or the world. It makes a difference to me, and that's the important thing. That, and getting to say anonymously all of the super mean things that I couldn't possibly say in a face to face conversation.