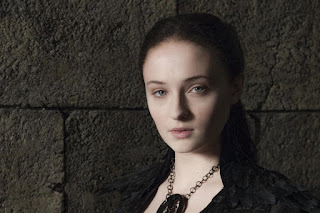 If you're anything like me you wait with baited breath for that time in the season when Game of Thrones starts getting REALLY good. And boy, has it gotten good.

But I've noticed that even the epic battle at Hardhome has been overshadowed by what happened to Sansa a few weeks ago. But why? At this late date I can't think of it as a spoiler to talk about the super uncomfortable rape sceen. Now while I don't advocate rape or wish to make light of what I'm sure is a terrible thing I don't understand all the outrage. I've probably read 5 articles (and seen links to many more) with hundreds of horrified comments on why this was such an unessesary and tasteless scene. The article that irritated me most though was this one from Vanity Fair. Did they need to "go there"? Yes they did, and I can give much better reasons than the "it happened in the books" argument that they found so unsatisfying. 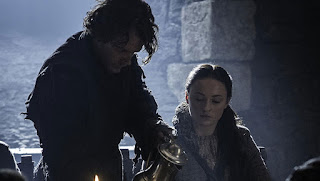 First off, what happens to Sansa isn't at all about her. Why isn't that okay? The look on Theon's face isn't just his reaction to what he's seeing, but about his own impotence to help. Maybe she isn't being savaged in the way these angry women imagine. Not that what he's seeing isn't terrible, but the fact that he's completely powerless to stop it or even object just a little bit is causing at least some of the distress you see on his face. Ramsay Bolton has already flayed Theon to within an inch of his life. He's tortured him in every physical way possible. There really isn't much else that he can do to Theon until Sansa comes along. Ramsay can only hurt Sansa so much because even HBO won't let a young girl get flayed on tv. The North probably wouldn't put up with that crap either. There aren't a lot of torture options left for Theon or Sansa. Ramsay Bolton is the new evil in town, and he's got to be worse than Joffrey if they're going to up the ante. He's got to be more psychotic, more violent, and more downright evil than Joffrey ever was. Let's not forget that Joffrey has Sansa stripped and beaten. How much worse would that have gotten if Tyrion hadn't stepped in when he did? In my opinion that's just as bad as what Ramsay did, but there wasn't a huge internet outrage about that. Joffrey as much as told her that he was going to rape her even after they were both married off to other people. If he hadn't died when he did Sansa would have had the same thing from Joffrey that she got from Ramsay. 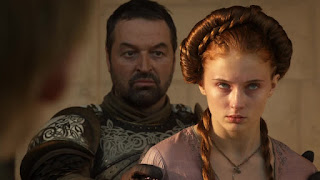 So let's move on to the point of taking the power away from a strong female character. She is absolutely not strong in any way. Since the beginning she's been whiny, weak, and easily manipluated. She got a goth makeover, let Littlefinger teach her how to lie, and told Brienne to fuck off. That is not strength. Pretending that you have power does not give you power. After all this she may deceide to quit being a pawn, and take some power. I'm sure Brienne will show up soon to make sure that the Boltons get what's coming to them, but Sansa may at least get to help. She's still got a big confrontation with LIttlefinger to go through before she has any kind of power though. And while I'm at it, I don't think she's going to kill Littlefinger. He knows what kind of people he's leaving her with, and I'm sure he's got a plan for dealing with Sansa should she survive her marriage. He's not dumb enough to get himself revenge murdered. No matter how much he might deserve it.

Now back to the books. They've had her take the place of the steward's daughter Jeyne Poole. She had it much, much, much worse than Sansa. But it seems to me that they're also setting her up to take the place of Stoneheart eventually too. Some really bad shit has to happen to her for her to go out and get the kind of vengance that's needed. I know the fact that Roose Bolton had her mother and brother killed is pretty bad, but if she's going to go all zombie kill crazy she's going to need the personal abuse motivation thrown in there to drive it fully. And yes, the sympathy for what's been done to Theon will win out over her anger at him too. Even if he didn't kill Bran and Rickon he did betray Robb, and get her house burned down. QWe already know that Stoneheart will not be in the show (and how would they even introduce her at this point in the show?), but if they play it right Sansa could go totally nuts in a way that would still be completely satisfying. It could end up being even better than having Stoneheart, if they give her enough motivation. 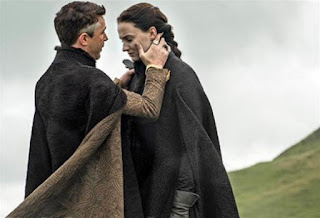 And finally, you're all getting pissed off about something that happens in a fantasy book world. It's got some historical basis, but it's still not real. And in the vaguely historical times that these books are based in rape was a pretty real and common thing. If you don't want there to be rape in your medieval type fantasy then you should go out and write a series of best selling novels that get turned into a show for HBO, and you can have all of the pointless girl power you want. I think HBO has been pretty ballsy to show all of the terrible stuff that they have, and certainly wouldn't want them to stop because a few women couldn't separate fantasy from reality. And don't say it's because young kids will think that rape is okay from watching this. If your young children are watching something this violent, then you're an awful parent who is going to have way bigger problems really soon. Honestly, I thought the sex scene with Sam and Gilly the following week was much more unsettling than the Sansa scene. Or Danaerys and Khal Drogo, or Jamie and Cercei on Joffrey's coffin, or whatever other sexual horrors are coming up next. I honestly can't understand why people aren't more upset about what just happened to Princess Shireen. Now that was gruesome.