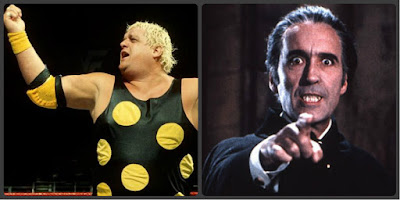 First I want to offer sincere and heartfelt thanks to the folks that stepped in to provide content while I was away. Our regulars Beth, R.T., and Jerry have made a huge difference in the site and their involvement on a weekly(ish) basis has been a Godsend.

Our guest writers also did bang-up jobs. If you didn’t check ‘em out, I highly recommend you go and do so:

Jeff Francis Explains Why G.I. Joe: A Real American Hero is the Best ToyLine Ever

These folks gave me a much needed break from not only Needless Things but from being Phantom Troublemaker, which is something that hasn’t really happened in around six years. Between the site and maintaining some sort of social media presence, I’ve been this guy 24/7 for a long time now. It was nice not thinking about it.


While I was away the world lost two great icons. I wanted to take today to say some things about a couple of performers who meant a lot to me. 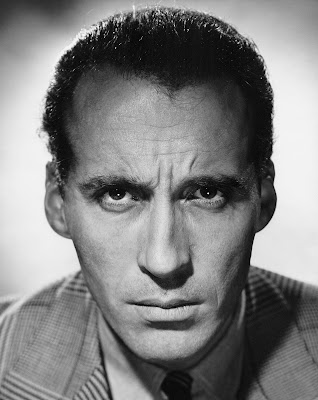 As I’ve stated before on the site, Christopher Lee is my Dracula. I grew up watching Hammer horror with Granny Troublemaker and his gruesome, intense portrayal is the one that imprinted on me.

Note to Funko: Pick up the Hammer license, please.

As the years passed I saw Dracula in more and more things and was always somewhat wary of him. Even as celebrities became more exposed over the decades and social media created an all-new paradigm of awareness and interaction, Mr. Lee remained an awe-inspiring figure to me. Those early encounters with the Prince of Darkness were too firmly rooted to be entirely dismissed. I never had the opportunity to meet the man, but I’m honestly not sure I could have handled it if I had. 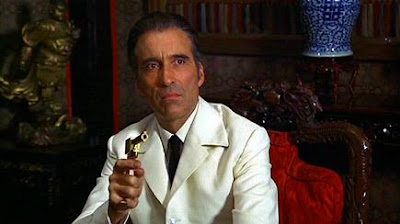 My favorite James Bond film is The Man With the Golden Gun. I couldn’t tell you when I saw it or even in what order I saw the Bond films. Bond is one of those things that has just been there my entire life and is probably worthy of its own post. Golden Gun may well have been the first one I saw because I know one thing for sure – Scaramanga felt like the main character to me. Well, maybe not the main character, as it was obvious Bond was the protagonist, but Lee’s presence was so powerful in my mind that he seemed like the Big Deal of the movie. Plus, it was just crazy to see him playing a character so vastly different from Dracula. I’m not positive that it was the first non-Dracula role I saw him in, but it seems likely.

I certainly didn’t see The Wicker Man when I was a kid. I believe it wasn’t until Anchor Bay released their edition in 2001. I didn’t actually have any familiarity with the movie at the time. The only reason I bought it was because it was from Anchor Bay and starred Christopher Lee (excellent reasons to take a chance on anything). This is one of those rare films that left me feeling dirty and with an overwhelming sense of dread and despair. And I mean that in the best possible way. It’s one of the most powerful movie experiences I’ve had, to the point where I still can’t even consider watching the remake.

No – not even for the bees. 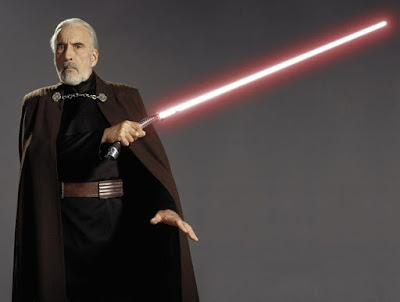 I was beyond delighted to see Christopher Lee as Count Dooku in Attack of the Clones. It seemed so right that he be a part of the franchise, particularly as Darth Tyranus – the first Sith Lord to truly have any sort of character beyond Super Evil Bad Guy (he also had the best lightsaber of the whole franchise). Lee brought a depth and gravitas to the role that is missing from the other one-dimensional bad guys of the movie franchise. It’s a shame he couldn’t have played a larger roles in the prequels.

Yes – I understand that you’re going to say some things about Darth Vader. That’s another discussion. I’m here to talk about Christopher Lee.

I can’t overlook Lee’s portrayal of Saruman in Peter Jackson’s epic Lord of the Rings movies. Once again, he brought a massive presence to a role that had to deliver a lot of power in a relatively small amount of screen time. Sir Christopher only needs a few seconds to establish a dominance and sense of menace that few other actors could manage.

I’m delighted that Christopher Lee chose to spend his final years working in genre films. We now have a multitude of wonderful movies to enjoy rather than wondering, “what if…?”.
But he will still always be Count Dracula to me. 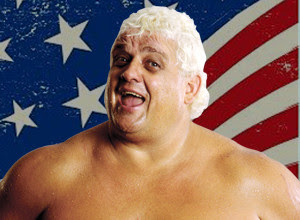 Christopher Lee made his mark in my consciousness at an early age and is someone that I have always admired. I’m upset that he passed, but at 93 years of age he had a fuller life than most ever will. His passing is sad, but not tragic.

When my wife told me about Dusty I felt like I had been punched.

I didn’t believe it at first because you can’t believe anything anyone reads online. But it was very quickly verified and I, for a short time, couldn’t breathe.

Dusty was too big to die. He was one of my heroes for so many reasons – being the best talker ever, being a fat guy that worked his ass off, having an incredible mind for the business, and being one of the best storytellers I have ever heard.

Dusty Rhodes was engaging from the second you first saw him. When he appeared it was time to pay attention. In my personal opinion the only wrestler to have the same kind of natural energy and presence as Dusty was the Rock, and he only had it for a few years. Dusty was always on.

As I sit here writing this, my eyes are filling up and I cannot believe that he is gone. I just looked at a picture of him and it hurt. Nobody was more full of life and exuberance.

My early wrestling years were dominated by the WWF, so my first memories of Dusty were all polka dots and Sapphire. I didn’t understand how this big, fat guy fit into the world of the WWF, but every time he was on screen I was entranced. And his interaction with Sapphire was groundbreaking. It made a huge impact upon how I saw the world. I was raised to believe all people are equal, however I grew up in the South, so my parents’ words and reality often did not mix. But I could watch WWF on Sunday mornings and see Dusty and Sapphire – clearly social equals – dancing around the ring, having a great time. Nobody dared talk down to Sapphire. 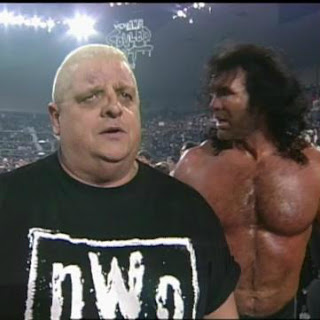 I next saw Dusty as an announcer in WCW. He was always a delight to listen to, a fact than is attested to by every single person with even a tangential knowledge of wrestling having a Dusty impersonation.

Here’s how big Dusty is – I work with a lot of straight-laced people who don’t do a lot of pop-culture things. Very few would admit to having more than a passing knowledge of wrestling. But when I arrived at work the morning after Dusty’s passing, some of them were talking about him and doing the “Dusty voice”, but in a surprisingly respectful way. I didn’t get the usual, “Hey – I heard one of your wrestlers died. What happened? Drugs?” There was a certain reverence for Dusty that surprised and touched me.

Dusty joined the nWo just like everyone else did and unfortunately became just another part of that sideshow. I think he would have been much better served as a mouthpiece for WCW.
I actually got to see Dusty in a match at an ECW show in Georgia on May 19, 2000. I didn’t know very much about ECW at the time, but I had a couple of friends who were big fans. I wish I had a better recollection of the event because according to ProWrestlingHistory.com it was a great show:

Literally the only things I remember about it were running into my high school friend, Shannon (also known as Daffney and Lucy Furr), being blown away by Lynn and Tajiri, and marking out HUGE for Dusty while being spectacularly unimpressed by Jack Victory. I still don’t understand how that guy was ever over. 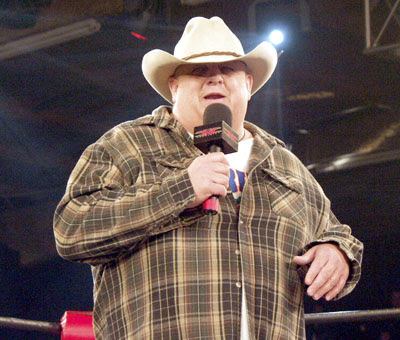 Dusty’s next big impact was on Total Non-Stop Action Wrestling. He was a massive part of why my friends and I decided to take a chance on TNA’s early Wednesday night pay-per-views in 2002. They got my ten bucks because of Dusty. There was some bad booking and some worse matches, but the product was providing something that the WWE simply was not at the time – good, old-fashioned wrestling. It felt fresh and new while still being rooted in tradition and Dusty Rhodes was a major factor in that.

Side Note: I poked around to check my facts because, quite frankly, my memory isn’t the best in the world. Wikipedia says that Dusty didn’t arrive in TNA until 2003, which would mean that I am not correct about any of this, but for whatever reason Dusty is inextricably linked to the early days of TNA to me. I’m not sure I trust Wikipedia, but I can’t find a whole lot of thorough information about the early days of TNA.

While Dusty will be best remembered as an inimitable (and yet imminently imitable) in-ring character, his contributions behind the scenes were massive. He worked and booked for pretty much every promotion in America at some point. He created matches, coached newcomers, and ran his own Turnbuckle Championship Wrestling promotion for years. He lived and loved the business and is one of the most influential figures in modern wrestling, with perhaps only Vince McMahon and maybe Eric Bischoff topping his accomplishments.

I can say all of the above without even referencing the bulk of Dusty’s career, which I didn’t really discover until WWE released The American Dream: The Dusty Rhodes Story on DVD in 2006. I loved Dusty for his charisma and presence, but as soon as that set arrived in the mail, a whole new aspect of the Dream was revealed to me – he was an incredible worker.
It’s hard to imagine that there was a time when I did not know this, and that it was so recent, but it’s true. I sat and watched every minute of that three-disc set, amazed at what I was seeing. I had read Dusty’s autobiography the prior year (I was huge into wrestling autobiographies in the early aughts; as was everyone thanks to Mick Foley), but reading about someone talking about how awesome they were and actually seeing it are two totally different things, if you will.

Dusty was just as good a storyteller in the ring as we was on the mic. Every match I saw pulled me in, despite the fact that I didn’t have the full context of whatever feuds might have been going on. Every action meant something and every moment was Dusty’s. I don’t think there’s another set that WWE has released that has had quite the same impact on me.
And of course, Dusty’s legacy is more than just his influence on other wrestlers, promoters, and managers. He gifted us with two sons that are excellent performers in their own right. Dustin has made his cemented his own legacy with his work in WWE and elsewhere, while Cody is making his own mark on the business and has the potential to be a future Hall of Famer. My sincerest sympathies are with the Rhodes boys and all of Dusty’s family.