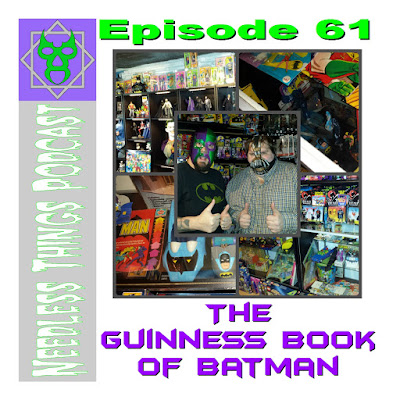 Batman fan and memorabilia collector Brad Ladner is attempting to get into the Guinness Book of World Records for having the world’s largest collection of Batman memorabilia. Obviously he needed Phantom Troublemaker’s help.


Brad contacted Phantom after the NeedlessThings Toy Panel at Joelanta & the Great Atlanta Toy Convention. He had a massive Batman collection and needed an expert to verify it for submission to Guinness. Obviously Phantom is a toy expert, but just for good measure he wanted a Batman expert along as well, so he teamed up with the ESO Network’s own “Howdy” Mike Gordon to head out to the Stately Ladner Manor and count Batmans.

Side Note: Phantom also wanted Mike along just in case Ladner was some nutjob whackadoo that wanted to cut his face off and wear it as a diaper.

Before the big count, the guys sat down to talk about the Caped Crusader and his impact on pop culture. Brad also shared the story of attending a relevant movie premiere thanks to a big contest win!

Listen in as Phantom, Mike, and Brad talk about what it takes to get into the Book!:

Be sure to join the new NeedlessThings Podcast Facebook Group and get in on the conversation for this week’s episode! Let us know what you think!

Today’s episode is brought to you by Welcome to Tiki Z’s, the brand new soundtrack companion to Mike Gordon’s exciting comic book, Tiki Zombie! Our musical selection is “?” by ?. Check out TikiZombie.net and NewLegendProductions.com for more info!

Posted by Phantom Troublemaker at 7:54:00 AM