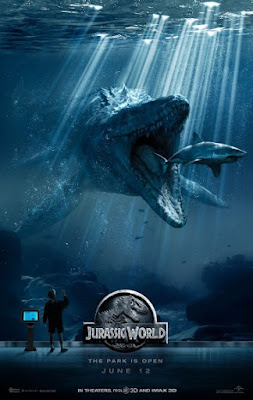 I am not, technically, back from vacation yet. But we went and saw Jurassic World last night and I had to write about it.

The Jurassic Park movies aren’t quite as dear to me as they seem to be to other people. They’re pretty good movies about dinosaurs and about man messing around with stuff best left to God, but they didn’t touch my soul in any meaningful way.

I don’t think the sequels really touched anyone’s soul, but that first movie seems to be held pretty sacred by a large number of people; especially those around a decade younger than me. And I will give them this – Jurassic Park is a way better Spielberg movie to hang your youth on than one about a brown nutsack from outer space. So you guys win that one.

A big part of why Jurassic Park isn’t more magical for me is that it was the first movie where I was truly and consciously aware of the fact that the book was way better than the movie. There are many factors that contribute to this, but it can be summed up in three simple words:

But we’re not here to talk about the original movie. I only bring it up because there are an awful lot of similarities between Jurassic World and its progenitor. And I’m not just talking about kids with family issues and scenes where dinosaur eyeballs are peeking into hidey-holes full of terrified humans.

For those of you who would like a spoiler-free review of this new sure-to-make-billions blockbuster, here you go:

The dinosaur parts are incredible. This movie was made by people who fucking love dinosaurs and, perhaps more significantly, fucking love Jurassic Park. It occurred to me over and over again while watching that the creators were determined to give us our dream dinosaur scenarios. You will get everything you ever wanted that the original Jurassic Park movies didn’t quite deliver. This is over-the-top, gonzo dinosaur action.

While I’m on the topic, much of the dinosaur action is quite violent and there are a ton of fairly brutal human deaths. We brought our seven-year-old son and I’m honestly not sure we should’ve. I mean, he loved the movie and seemed totally fine afterward, but I was concerned. There’s blood spatter and dudes getting chomped in half and stuff. It’s not The Walking Dead bad, but it’s much more intense than I was expecting.

There is, however, much less foul language and adult content than the Transformers movies. So there’s that, I guess.

You know how Chris Pratt is the focus of the trailers for Jurassic World? I think that was a smart move because everybody loves Chris Pratt. It enhanced the concept of a movie that just can’t seem as special as its predecessors because at this point in cinematic history audiences have seen bigger and better CGI than these dinosaurs.

Chris Pratt is not a reason to see this movie. None of the human characters are. Just take a look at the non-LEGO toy lines to see how much importance is placed on the humans. Go for the dinosaurs. Enjoy the dinosaur mayhem. Just know that you are not getting Peter Quill or Andy Dwyer or Emmet. Any actors could have played any of the roles in this movie, save one. And I’ll talk about him after the Spoiler Warning.

Side Note; I do want to acknowledge Jake Johnson for having the funniest moments in the movie and stealing every scene he’s in. His chemistry with Vincent D’Onofrio is hilariously awkward. I could watch the two of them interact for a whole movie. I’ve seen Johnson in a few things and he’s always strong.

Speaking of CGI, it looks like CGI looks. No CGI will ever be as good as Jurassic Park because we’re all used to it now and what it looks like and what it can do. But the visuals are about as good as they get and there were very few points where I thought about the fact that what I was looking at was not real. The action is fast-paced and fun, so you don’t really look for the flaws.

As flat as the characters are, I liked the story. During the first half hour of the movie I had an overwhelming feeling of, “They did it”. If you don’t know, the premise is that a rich Arab investor has gotten Isla Nublar up and running, rebranded as “Jurassic World”. The disasters of twenty years ago are largely forgotten and the theme park is a worldwide phenomenon. It is, however, struggling a bit as the public is no used to the idea of dinosaurs and wants bigger and better things. This, of course, leads to problems.

Well, a problem. If you’ve been following the marketing at all, you already know about Indominus Rex. Allow me to ease your fears about what could have potentially been a lame and franchise-killing bit of enhancement: the creators knew exactly what they were doing by introducing this genetically-engineered new monster and everything about it is totally satisfying and ingenious. Indominus is not only a great addition to the plot, it establishes a new paradigm and a future for the franchise. She has her own story within the narrative and it is quite poignant and satisfying.

Overall this is a fantastic Summer blockbuster. It could have been better. More work could have been put into the humans and into the story of what has been going on with Isla Nublar for the past two decades. But at the same time, I appreciate the pacing and the economy of storytelling. Things move right the fuck along. Aside from a tiresome narrative about the protagonist family of the movie, the action is fast and satisfying.

Side Note: You might notice some talk online of sexism or gender inequality or whatever in the movie. Ignore it. It’s the same myopic, agenda-laden dum-dum talk that all of these social justice wanks spew at everything that comes out. I noticed a few things in Jurassic World that would make tasty, if baseless, targets for those jackasses and they didn’t let me down.

B.D. Wong is the only returning cast member (sort of) from previous films and his Dr. Henry Wu is delightful. He is the lead geneticist and the primary creator of Indominus Rex and also a legit mad scientist. I suspected it early on in the film just from Wong’s slightly sinister delivery of lines and presence, but at the end of the movie we finally get a look into his secret laboratory and it is awesome. He has a big stack of terrariums full of his own collection of crazy, Herbert West-style creations. We discover that he has been working with Vincent D’Onofrio’s nefarious InGen head of security, Vic Hoskins all along to develop dinosaurs as weapons.

THIS IS FUCKING AWESOME.

Wong does a great job being subtly diabolical and survives, hopefully to appear as a full-blown Evil Mad Scientist in the next movie.

There will absolutely be a next movie because this thing is going to make jillions of dollars. The seven o’clock showing at the theater we went to was sold out and our seven thirty showing was packed; more so than Age of Ultron at the same theater, also on a Thursday night.

I mentioned it above, but the Indominus Rex truly is awesome. I went in expecting a lame attempt to revitalize the franchise and was delighted to find that it was so much more. She’s a well-crafted monster that fits quite nicely into the established “science” of the world, especially once we start getting to know Dr. Wu. As preposterous as this Frankenstein’s lizard might seem, she becomes quite believable in the context of Jurassic World. All of the scenes involving Indominus are powerful and exciting, particularly her initial encounter with the ACU (the private military force that is employed on Isla Nublar). She’s an unstoppable force of nature.

Well, at least until the three-way-dance between Indominus, the Tyrannosaurus Rex (technically another returning character), and Blue the velociraptor that is the climax of the movie. Granted, the mighty mosasaur gets the win, but that’s more of a run-in than a victory. You may laugh at my overuse of wrestling terminology sometimes, but this fight was straight-up like watching Rey Mysterio, Jr. vs. Brock Lesnar vs. Undertaker, with Andre the Giant eating Lesnar for the finish.

An interesting aspect of Jurassic World is the characterization of the dinosaurs. Indominus is a serial killer, the velociraptors are sort of anti-heroes, and the Tyrannosaurus Rex is treated with this iconic reverence. When Bryce Dallas Howard’s character releases the thunder lizard from her pen to battle Indominus, they might as well have cut to Ken Watanabe saying, “Let them fight”.

The other dinosaurs are mostly portrayed as helpless animals. One of the themes of the movie is understanding that we have created these things and are responsible for them. I really felt something when Owen and Claire came across the field of slaughtered bodies that Indominus had left in her wake. Claire’s realization that these creatures aren’t just property was, for me, the only emotionally significant point in the movie (not that there’s anything wrong with that).

Before I forget, there was a bit where the movie acknowledges its wanton departure from the actual science of dinosaurs. Dr. Wu states that Isla Nublar’s inhabitants don’t reflect our modern knowledge of what dinosaurs look like because that’s not what people want dinosaurs to look like. It’s a nice, meta moment that lets us suspend our disbelief a little more easily.

Yes, Jurassic World could have been a more thoughtful movie. But it delivered a thousand percent on the hardcore dinosaur action I was looking for. Moreover, it really falls in line, character-wise, with the other movies. Think back to the first one – which of those characters was truly likable? Grant was a grouch, the kids were just awful, Hammond was a delusional megalomaniac, Malcom was an arrogant prick, and all of the supporting staffers were jerks or too insignificant to mention. Sattler and Arnold were the only characters with any redeeming qualities. So at least World didn’t throw a bunch of irritating characters at us. They’re just kind of dull.

I keep making mention of flat characters and a somewhat shallow plot, but I don’t want you thinking I didn’t love Jurassic World. I don’t want to understate the important fact that it did exactly what I wanted – gave me a dinosaur-infused thrill ride that escalated every step of the way. It’s an action movie, a horror movie, a silly pseudo-sci-fi movie, and even a bit of a conspiracy flick, as the InGen plot is slowly revealed over the course of the film. Yes, it could have been better. It could have presented deeper human characters and a more fleshed-out world. But I didn’t need any of that because it gave me what none of the other Jurassic flicks have – a fully satisfying two hours of dinosaur action. Where I felt like the other three were shy about the subject matter and even seemed a bit self-conscious at times, World has great, galloping fun with its engineered dinosaur concept.

Posted by Phantom Troublemaker at 1:52:00 PM