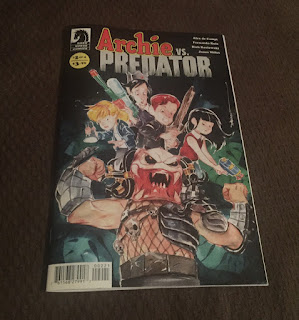 After reading my review of Archie Vs. Preator #1 you probably got the feeling that I wasn't looking forward to the second issue. Well, you would have been right. The first issue just felt off for me. Although mixing the Archie universe and Predator universe was an interesting idea, the story just disappointed me. The whole point of checking out the first issue was to see the weird mash up of the red headed teenager and the hunter. So it was successful in that way. And I recommended the issue for that exact reason.


I am happy to report my feelings have changed very much so with the second issue of this four part series. With the first issue, I felt it was too cookie cutter with some confusing panels that didn't fully explain the story. (Of course, maybe its me and the way I read comics but sometimes I am easily confused.) I even went back and reread the first issue and still thought the story was off. I do feel they crammed a lot into one issue but now I realized they had to. The setup had to be there and had to take as long as it did. It is apparent from the first page of issue two that it was well worth the wait.

First things first. I am not a fan of this cover but its the only one that my comic book store had so I grabbed it without hesitation. I may try to get the other cover which cleverly has the predator hiding under a table while the gang is sitting at Pop's. Really, I just wanted the story so the cover is a nice bonus but inside was the meat that I wanted. From the first page the story immediately captivates its audience and the second page will no doubt have you saying “Oh shit,” out loud like it did me.

In the first issue, sweet innocent Betty Cooper took the Jaguar Knife while attempting to put a curse on Veronica over, you guessed it, Archie-kins. That is why the Predator followed the gang back to Riverdale and why he is waging war on our favorite teenagers. What I loved about this issue is that its genuinely funny while progressing the story in a fast paced and well thought out way. This is a very Betty/Veronica heavy issue but that is a good thing because its actually interesting. We also get some surprises of people who show up and people who kick the bucket. This series is not shy on killing anyone and is obviously out of the continuity of the Archieverse.

One of the highlights of this issue is that the art stays true to the traditional style of Archie while providing the violence of the Predator. Its just funny to see these characters either covered in blood or getting completely slaughtered. I commend both companies for pulling this together and having the guts to just tell a unique story.

Another thing I love is how these characters have stayed so true to themselves for so many years. Jughead does not have many panels in this story but he absolutely steals the scene every time. The normal gang is all here but someone I am not familiar with is Kevin Keller. I've heard about him over the years so it was nice to see him included in the story. Alongside of him, was his dad who makes an appearance which has a pretty big impact on the story.

My hopes at the end of my review for issue one was that they would fix many problems that the series started off with. I am happy to report that issue two does indeed further the story in the best way possible. It provides a fun story line that is just crazy to think is actually happening. The best part is that there is some pretty good action in this one towards the end. For the little we saw Predator in the first, we see him a heck of a lot more raising all sorts of carnage.

What I love about this series is it reminds of something that would have happened in the 70's or 80's. Kind of like an adult Scooby cartoon when they would meet celebrities like the Harlem Globetrotters and Jonathan Winters. I am very excited for issue three of this series and can't help but wonder how they are going to wrap up this series. With two more issues left there is sure to be a lot more violence and surprises. I know one surprise I would love to see but don't want to say what it is just in case it actually happens.  I Don't want to spoil it for anyone if it indeed does but it will make it's way into my final review of the series in a few months I'm sure.

I am R.T. Ewell (but you can call me Richard if you see me out in public) & I'm a nerd who is also a self published author. While I also have the privilege of being Needless Thing's resident Lego fanatic & reviewer. My first novella Fat Trapped was released in 2013 (available on Amazon Kindle) introducing the horror world to The Blankenship Family. Some random likes of mine are the Batman villain Bane, Jeff Smith's cartoon epic Bone, and the 80's BMX movie RAD.