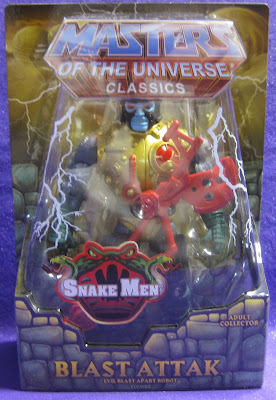 We are in the home stretch of Masters of the Universe figures. Some of this year’s releases are long-awaited treats like Ninjor, Snake Armor He-Man, and a decent King Hssss.

Okay, so the original Blast Attak was not a turd bucket and was, in fact, one of the more awesome action figures of the entire vintage line because he exploded. I shouldn’t hold the modern figure’s utter uselessness and crapitude against the admittedly cool original.

Blast-Attak is basically a suicide bombing android. All he has to do is force his way into the midst of some Heroic Warriors and detonate himself and – KABLOOEY – less Heroic Warriors left to punch Mer-Man in the face. Presumably Skeletor could even just toss Blast Attak off the side of a Roton or something.

After the detonation, Blast Attak has the ability to reassemble himself and do it all over again. It’s a pretty great concept, but unfortunately not one that lends itself to the restrictive ethos of the Masters of the Universe Classics line. These guys can’t even be bothered to put paint on a skunk-man’s blaster. Do you really think they’re going to create an all-new torso just so some dumb android can split in two?

I’m sorry. My disappointment with this figure has left me in a really unfair mood. Matty has done wonderful things with some of the Classics figures – Modulok, New Adventures He-Man, Icarius, and Grizzlor are just a few of the cases where I truly feel Matty went above and beyond. These show that they are capable of delivering the goods on characters when they want to. Which makes this Blast Attak even more frustrating.

This is just a figure. An ugly one. It doesn’t bifurcate or do anything that even comes close to resembling the entire purpose of the character. I know that this won’t bother some people. I’m honestly not sure why it bothers me so much, but it sure does. This is the first figure of the entire Masters of the Universe Classics line that I am absolutely and entirely disappointed with. Plenty of them have had their flaws, but to me Blast Attak is pure failure. If I hadn’t committed myself to reviewing every MOTUC release for the line’s final year I would’ve flipped this guy on eBay without a second thought.

Blast Attak also had the misfortune of being the figure that I forgot about. I haven’t been checking my invoices and shipping notices like I used to because, quite frankly, this line doesn’t excite me like it used to. That’s not really so much a comment on the quality of the line as it is a feeling of, “Okay, I’ve probably got enough of these”. But I forgot who was shipping this month and opened the invoice e-mail to see. Obviously I wasn’t happy that it was this doofus, but then I took it a step further and glanced down at the charges – $26.00 for the figure, $2.21 for tax, and a ri-fucking-diculous $10.79 for shipping means this grey turd cost me thirty-nine dollars.

That’s awful. I know the figures cost too much and I know Digital River overcharges grotesquely for their slow shipping, but I am simply aghast knowing that that’s what I’m paying for these. I really am quite disgusted with myself over this.

Having said all of that, I will still be reviewing the figure on the merits of how it was intended by the 4 Horsemen and the Matty design team. It was never going to have a satisfying feature, so I’m just going to review Blast Attak as the figure it was meant to be rather than the one I think it should be. 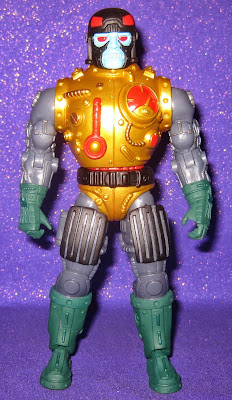 This is one fugly figure. The color scheme is displeasing to the eyes, it’s clunky, and the golden torso is just a bewildering hunk of brightness in the midst of a drab collection of clunky limbs. I don’t like looking at Blast Attak. 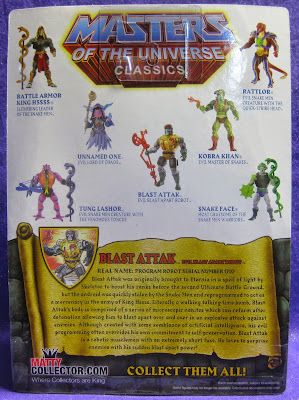 The MOTUC blister card never disappoints. The contents are another story. 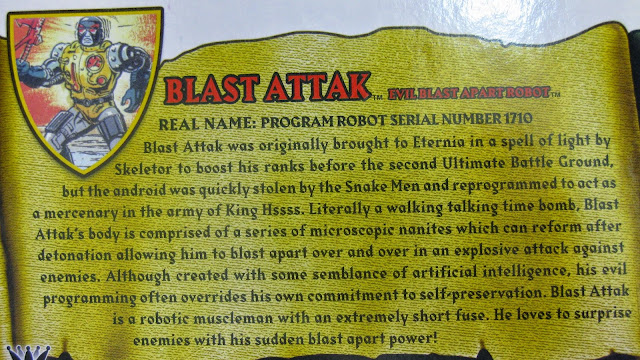 There’s no need to bring nanites into this. Blast Attak does not look like a nanite-driven destruction machine. He looks like Wreck-Garr and Smurfette had a baby and buried in a trash can in Detroit. 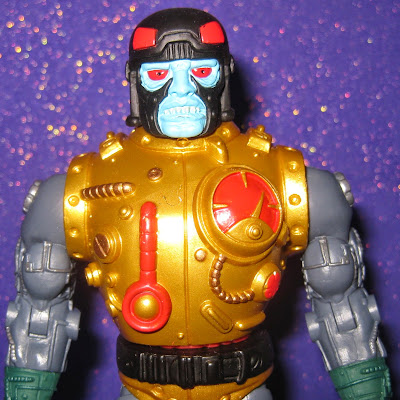 The head sculpt is distinctive, but not in a good way. The helmet actually looks pretty cool, in a stupid way. It looks like somebody trying to recreate Darth Vader’s helmet, but they only saw it once and from very far away. The face underneath doesn’t look good, and by that I don’t mean that it’s hideously ugly in the same way that Krang is hideously ugly. I mean that Blast Attak’s face looks like it was sculpted by a child. The contours and lines are just rough. 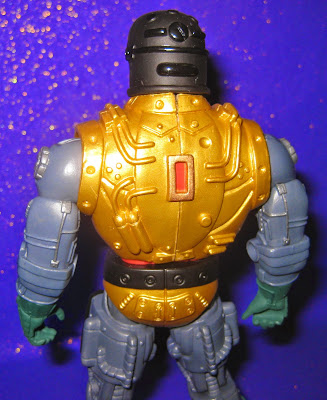 The torso is interesting. The base is a Horde Trooper body with rubber underpants and torso armor. The sculpt is very cool and loaded with detail. Unfortunately Matty design only allowed for one color of paint, so the torso looks like a big lump of gold with a couple of red spots and a belt. Just a little silver on the trim or wires would have made a huge difference. 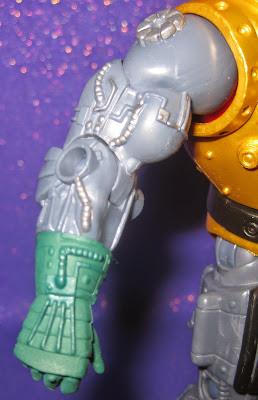 The arms and legs are SO DULL. The sculpts are great, but the paint is putting me to sleep.
The arms are Roboto’s, which work fine for this turd muffin. I didn’t bother checking to see if the hands still come off because I just don’t care. 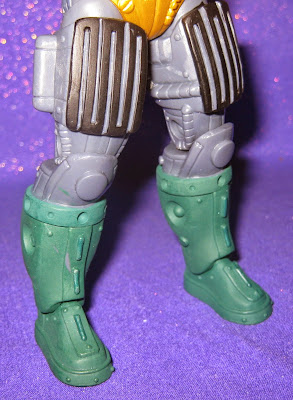 The legs are all new and are, like the torso, quite interesting. The detail of the paneling and tubes looks great. I actually quite like the big pads on his thighs and the fact that they left the grooves on them gray. The fact that big, black thigh pads are one of the most interesting things about Blast Attak is pretty damning.

The boots are cool, as well. They’re thick and have big details. They look like robot combat boots. 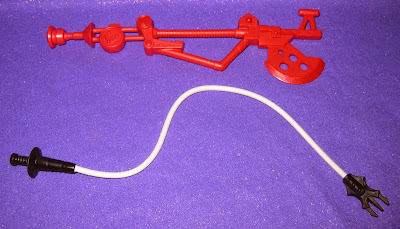 Blast Attak comes with two items that, quite frankly, I am having a hard time naming. 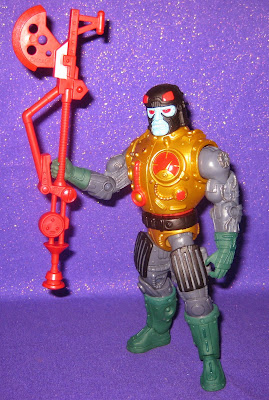 The first looks like some sort of ax/rifle/pogo stick combination. I hate it for its awkward unwieldiness. One of the ends on mine was bent, but the plastic is soft so it wasn’t ruined. Well, more ruined than it already was by its stupid design. Blast Attak can hold it a few different ways, none of which looks any less idiotic than the others. There are a few spots of metallic red paint on this. That should make me happy, but instead it just angers me that they couldn’t somehow figure out a way to detail Stinkor’s weapons. He’s a figure I actually like. Blast Attak could have had a single turd brown paint app and I would like him exactly as much. Maybe more. 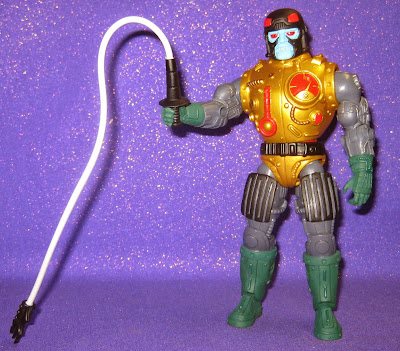 The other thing is sort of a whip. It’s actually like the fuse that the vintage figure came with, except that this one doesn’t plug in anywhere or do anything. It’s made of rubber, which is fine because I don’t care. 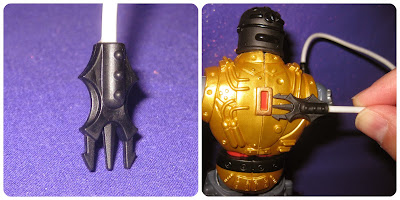 I don’t blame modern Matty for these dumb pieces of crap because they are updates of what the vintage figure came with. Although I do think they could have at least made the whip thing plug into the figure’s back: 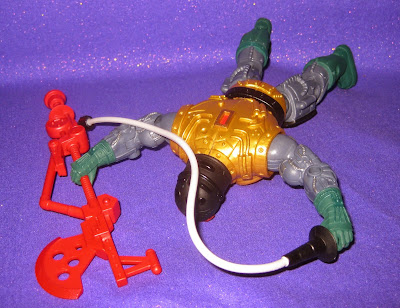 Blast Attak is the opposite of fun. 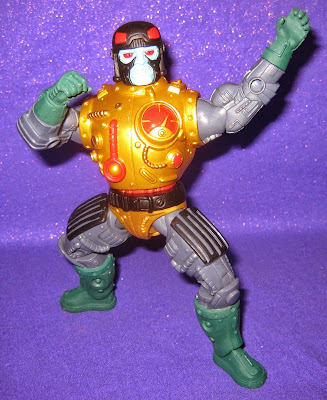 For the first time in a long time I’ve got a figure with loose joints. But it’s not just an elbow or an ankle this time – all of Blast Attak’s joints are loose. It’s really odd. He feels like a used toy.
Even more strange is the fact that I didn’t really have any problems posing him or getting him to stand up. Maybe it’s just because I wasn’t all that inclined to play with him. I dunno.

I will say this – thanks to the reduced profile of his torso and armor, the proximal joints work much more nicely than they do on most Classics figures. His hips and shoulders have a great range and Blast Attak’s arms can hang naturally at his sides. 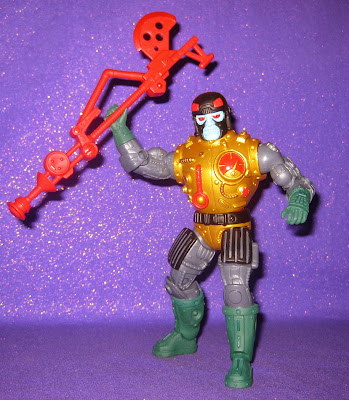 While he looks very stupid holding either of the included accessories, he can hold them. And I have to admit that I did have fun trying to figure out how to get a picture of him riding his pogo ax: 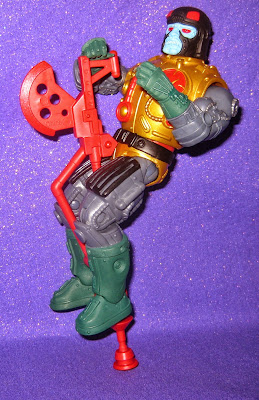 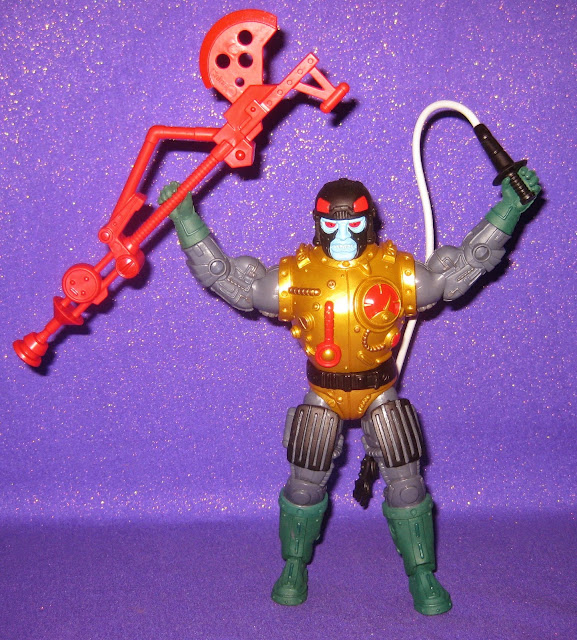 In case I was being too subtle for you – I don’t like this figure. It’s ugly and I don’t want it crapping up my Masters shelves.

It is a successful visual representation of the vintage Blast Attak. That figure was butt-frigging-ugly:

So as far as this being a successful Classics-style update, I guess it gets a 3 out of 5. The face sculpt could be better, they could have done more with the functionality of the accessories, and there could be more paint. It really feels like Matty phoned it in on this one. I understand. I’m sure he came this late in the line because they just didn’t know what the heck to do with him.
As far as being a desirable toy that I want to have on my shelf, Blast Attak gets a
1 out of 5

I know that seems harsh and I hardly ever rate figures this poorly, but I’m just dissatisfied with this guy in every way. I’m going to put him up on eBay with a Reserve Price of twelve cents. This is the first figure of the entire Masters of the Universe Classics lien that has just straight-up made me sad.

Don’t buy Blast Attak. Go to Amazon and buy this instead: