So Long, and Thanks for All the Daleks - Earth Station Who Episode 100 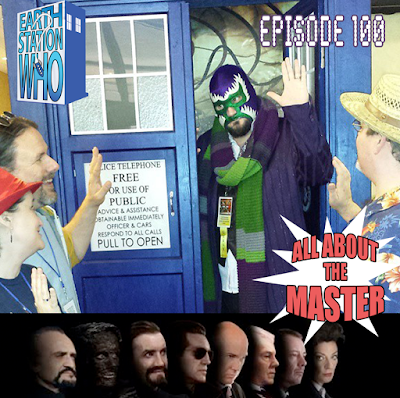 You may or may not have heard that I recorded my last episode of Earth Station Who as a regular host on Sunday. It was our one hundredth episode and we recorded in front of an audience at TimeGate and we discussed the history of the Doctor’s greatest nemesis – the Master.

It was a surprisingly emotional day for me. I really love the ESW crew and enjoy working with them, but I’m at a point where I need to focus on my own projects. While I love talking about Doctor Who, each bi-weekly episode required several hours of my time. It basically came down to me needing to spend those hours on Needless Things and the Needless Things Podcast. My day job and my family only leave so much time to work on my extracurricular nerd stuff. I can’t cut into the former and won’t take away from the latter. Something had to give and it was, after much thought and consideration, Earth Station Who (and also Monstrosity Championship Wrestling, but I’ll get into that later). 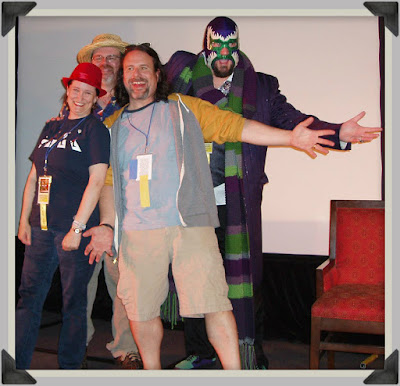 First things first; but not necessarily in that order.

I’ve told the story of how I met Mike Faber and Mike Gordon and how they brought me into the Earth Station One Network. It’s one of the best things that’s ever happened to me and I will always be grateful until I’m rich and can forget about them.

The first ESO podcast I was on was about the Doctor Who story “The Keeper of Traken”, one of my favorites. Well, one of my most fondly remembered. I went out and bought a headset just for the show because I wanted to be sure I sounded good. One of the worst things in any kind of broadcasting is when a guest or commentator sounds like shit, and I didn’t want that to be me. So I went to Fry’s and spent eighty bucks on a Turtle Beach gaming headset. It was totally worth it because I sounded fucking awesome.

I had an amazing time on the episode and really clicked with the guys. My biggest fear – other than sounding shitty – was of talking over somebody else. I think I might have a tendency to do that and I really hate it. I think I did alright.
The very next day Director Faber contacted me and offered me a co-host spot on a new bi-weekly podcast they had planned. A podcast about Doctor Who. Holy shit. He said that he and Mike Gordon had both enjoyed working with me and that I obviously had a good knowledge of Doctor Who. I talked it over with Mrs. Troublemaker – after all, this was going to be a few hours of commitment every other week. Watching the story we were going to be reviewing, writing up notes, then actually recording. But she encouraged it. She kind of had to – she was the one that told me to go and talk to Bobby Nash in the first place and that’s what led to me meeting the Mikes.

So on March 20, 2012 we recorded the very first episode of Earth Station Who and it was great. And it continues to be great twenty-three episodes later. I look forward to the next episode from the second the current one wraps.
From March 20th, 2012 until May 24th, 2015 I was a co-host on the Earth Station Who podcast, which is, of course, about Doctor Who. It started with me, Mike Faber, and Mike Gordon.

Two years ago we added the voice of the invaluable and incomparable Jennifer Hartshorn. The four of us together provided what I would wager is some of the most insightful and entertaining Doctor Who commentary available on the internet. We have an excellent chemistry that makes conversation fun and provides four distinct and interesting points of view. We disagreed often and argued never. We were able to respect one another’s opinions even if we didn’t share a point of view. This is a rare occurrence that, sadly, can be found in few places in media, especially the internet.

I treasure the time I spent on Earth Station Who talking with this wonderful trio, not to mention the many talented – and sometimes untalented – guests that Director Faber added to the mix. I’ve watched hundreds of hours of Doctor Who and have looked at it in a completely different way. Being on the show has made me think more about my favorite franchise and appreciate it more than I ever would have otherwise.

Follow the link below and listen to my final episode with Earth Station Who:

Earth Station Who 100 –
Live from TimeGate

Email ThisBlogThis!Share to TwitterShare to FacebookShare to Pinterest
Labels: Earth Station Who, life the universe and everything, podcasts