How I Spent My Spring Break by Phantom Troublemaker

A warning – there aren’t many pictures in this article because I wasn’t planning on writing about this.

I had to work during our Spring Break, so we didn’t go anywhere, but my parents came into town. We had planned to go to the Atlanta Zoo on Tuesday, but the forecast called for rain and none of us felt like dealing with any sort of precipitation on our one available day together. We examined our options and decided to visit the Georgia Aquarium instead, despite our first visit being decidedly sub-par. It was indoors and something we could all potentially enjoy, so it made the most sense.


Fortunately my dad drove, so I didn’t have my normal “finding parking Downtown” conniption. Once we got down there we realized that the World of Coca-Cola is right next door to the Aquarium and decided we should go there, as well. I hadn’t been since I was in high school and my dad had never been. Being Baby Boomers, he and my mom have this weird nostalgia for Coke products that I can only liken to my love of Star Wars. 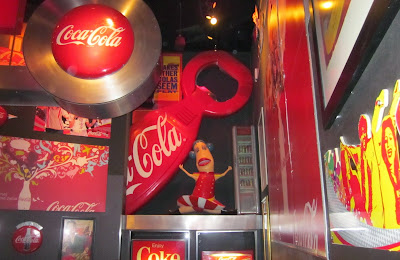 The World of Coca-Cola is delightful for a seventy-year-old man that can remember the public outrage when bottles of Coca-Cola went from five cents apiece to six cents apiece. It was fascinating listening to him talk about the memories associated with specific eras and pieces of memorabilia. He told me about only having canned sodas in Vietnam and how the pallets would just sit out in the sun, so all they ever had was flat soda unless they got lucky and pulled from a fresh pallet.
The World of Coca-Cola is decidedly not delightful for a seven-year-old boy that does not drink and has never had soda. There’s not actually anything to do there aside from look at a bunch of old advertisements and soda dispensing machines that have not, in fact, dispensed soda since before the nation’s bicentennial.

I know what you’re thinking. And yes – the World of Coca-Cola does feature a huge tasting room where you can sample a variety of Coca-Cola products from around the world that range from exotically delicious (Fanta Melon Frosty from Thailand) to shockingly repulsive (Italy’s simply named “Beverly”, which tastes like disinfectant). This is the highlight of a visit to the World of Coca-Cola and obviously a delightful treat for any kid. But after an hour of walking through a museum full of “look” and no “do”, my son had gone into “I hate everything” mode, which I totally understand. He would display no interest in doing anything, even if he was interested. Kids have this funny idea that they’re punishing their parents by not partaking in fun things.

The messed up thing is that they’re totally right. This doesn’t happen often, but when my son does go into this mode, it drives me nuts because it’s usually a situation like this where I empathize with his plight and don’t want him to miss out on whatever it is that took too long for his short attention span to get to.

Side Note: A significant portion of the “looking” involved a compulsory short film viewing about happy, multi-racial people having experiences; presumably brought about by their shared love of tooth-rotting, diabetes-inducing beverages. If you’ve ever seen any of Coca-Cola’s massively annoying theatrical commercials, it was like that but longer and more annoying. Plus all of the segments appear to have been shot by people in various stages of seizures. Probably brought on by being forced to watch Coke commercials.

So when we got to the tasting room and he grumpily sat on the little bench to the side and refused to partake in the fun, I kept going back to him with sodas until he finally relented and tried one. The trick was finding a green one. Green is his favorite color and he can’t turn down a green beverage any more than Scrooge McDuck can pass up a penny in the road. Once he had tasted whatever wacky Latin American beverage I brought him, he was in.

We excitedly moved around the cramped room and tested every flavor he wanted. It was difficult because people are, in general, rude morons. When we would get a sample we would step up to the soda dispenser, fill our cups, and step back to taste; then wait our turn to get another sample. The other humanoids in there would just stand in front of the soda fountains, gluttonously getting and drinking sample after sample until they had tried every flavor at each station.

Clearly this country’s handbasket has already burned up in the flames.

Which reminds me that we had to empty our pockets and walk through metal detectors at both the World of Coke and the Aquarium. Welcome to Atlanta!

I mentioned earlier that my son has not had and does not drink soda. We made an exception for obvious reasons. If you have ever wondered what it’s like to stare into the face of madness, take a soda-free child down to the World of Coca-Cola and let them down about a gallon of weirdo beverages from around the world. I can’t even imagine what teachers that take classes on field trips to that place go through. They must’ve seen horrors that not even Lovecraft could have envisioned.

Once we were all sufficiently nauseous from the tasting room, we proceeded to the mandatory World of Coca-Cola Gift Shop Experience, where I managed to get out without spending any money. My dad bought a little Coca-Cola delivery truck for his train set because tiny HO-scale dentists have to put their kids through college, too. 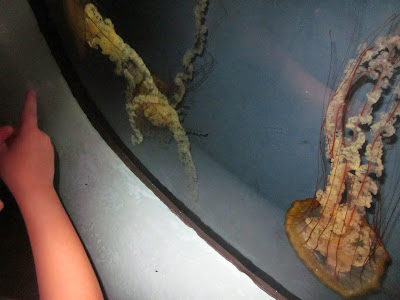 Next up was the Georgia Aquarium, which is conveniently across the way from the World of Coca-Cola. For what might be the first and last time ever, I have to give the City of Atlanta some positive acknowledgement. There are restrooms in the common area located between the Aquarium and the Coke Museum and they were clean and well-stocked with toilet paper and soap. I would have been less shocked to walk in the doors and find a sasquatch, so this was a pleasant surprise.

Apparently the Georgia Aquarium is a hotbed of gang activity because there were metal detectors there, as well. In an impressive display of poor planning, the Aquarium planners placed the mandatory souvenir photo op experience immediately after the mandatory pocket-emptying and metal-detecting experience, thereby reducing the chances of happy family pictures by sixty percent and the chances of anyone wanting to buy said pictures by eighty percent. 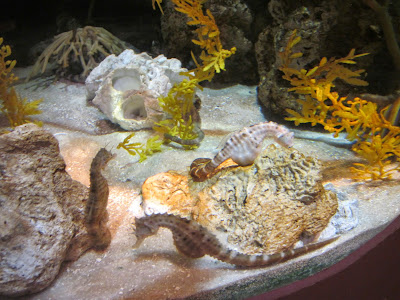 Oh – and the Living Seas in Epcot. That one’s awesome, too. But that’s Disney, which is a whole other level of experience and shouldn’t really be used when comparing things.
It’s not that ours is bad, it’s that both times we’ve been there it’s been so crowded that it just isn’t much fun. And I think it has to do with the layout. There’s a massive central hub with themed walkthroughs branching off. It isn’t really designed to flow very well or to compel the movement of heavy traffic. Also, admission was roughly forty dollars apiece. I get that these places require a massive amount of upkeep and I’m not necessarily saying that’s an unreasonable price, but when you can only tolerate about two hours of something, paying forty dollars for it is not the best deal in the world for my money.

Let’s try to end on a positive note, though! 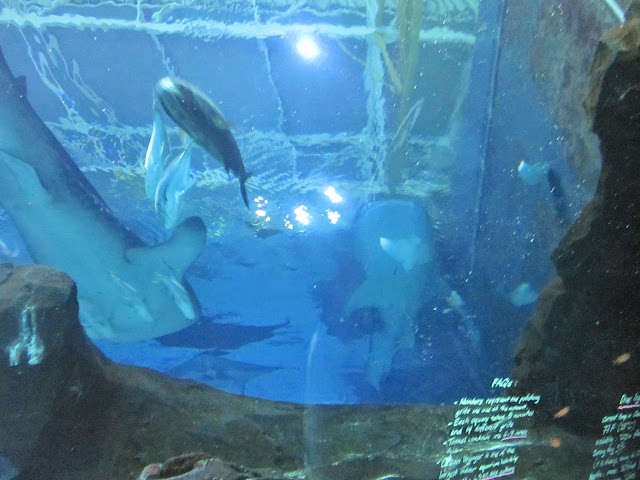 The whale sharks are awesome. They’re in the biggest tank and it’s absolutely mesmerizing watching those mammoth beasts circling along with all of the other aquatic lifeforms. There are many different viewing areas, including a moving walkway that goes through the tank, so that’s a big attraction.

The beluga whales are super weird but oddly endearing. One of them was swimming along the bottom of the tank, scratching her back on the rocks. 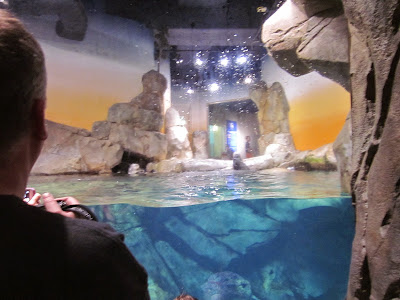 They have otters, and otters are adorable. I can’t remember the last time I saw otters in person, but the internet doesn’t do them justice. Go and see some live otters as soon as possible. 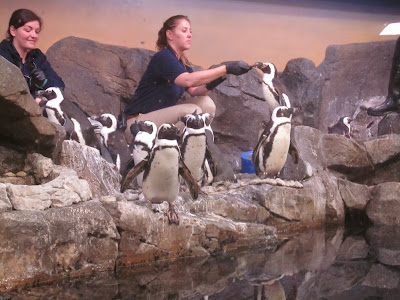 They also have penguins, and I love penguins. They aren’t as active or playful as the otters, but they’re darned cute just waddling around. Their exhibit features a little walk-through cave where kids can go in and then pop up in clear domes in the midst of the penguins. My son got a kick out of that. He came out very excited that a penguin not more than a foot away from him had looked right at him.

To be fair, there’s a ton of great stuff at the Georgia Aquarium. I’d love to go on a day when it wasn’t crowded (and under the imminent threat of gang violence, apparently) and actually be able to enjoy all of the exhibits. They have a vast multitude of different forms of sea life and I think I could quite easily spend an entire day there if there were about two-thirds less people than have been there both times we have gone.
So there’s Phantom’s Travel Tip – don’t go during Spring or Summer Breaks. Go when the kids are in school. Or when DJ Spider is spinning during Dragon Con.

Oh, and be wary of the mandatory Georgia Aquarium Gift Shop Experience. My mom and I both bought stuff and both came perilously close to losing money. My cashier rang up a twenty dollar shirt twice and Mom’s overcharged her by five bucks for a stuffed whale shark. If we hadn’t been paying attention we’d be out a combined twenty-five bucks, plus whatever sales tax is in Atlanta (probably around twenty percent). Like prices aren’t already ridiculous enough in attraction gift shops.

Memo to myself – write about attraction gift shops.

Email ThisBlogThis!Share to TwitterShare to FacebookShare to Pinterest
Labels: Atlanta, Atlanta events, Georgia Aquarium, life the universe and everything, spring break, tales from the troublemaker, World of Coca-Cola