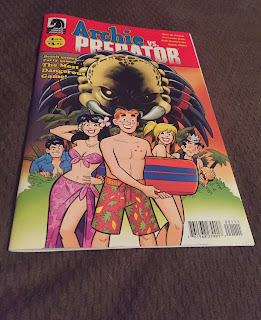 If you haven’t been keeping up with what Archie Comics has been doing lately, you’re missing out. They are doing something that I believe no other comic book company, at least the major three are doing. Archie Comics are taking their characters where they have never gone before and in more ways then one. While Marvel and DC scramble every year with a major summer event to shake up their universe, Archie Comics spends their energy telling stories. Instead of forcing you to read every title in their library to understand whats going on, for the most part they are telling individual stories.


The amazing part is that three of these stories are not aimed at their normal younger reading audience. Instead, they are focusing on a more mature audience. One of the titles that sparked this trend was more than likely in part of The Walking Dead phenomenon. What sounds like a joke at first or a parody of Archie Comics mainstay Life With Archie, Afterlife With Archie found a very loyal audience. The combination of smart story telling by Roberto Aguirre-Sacasa and absolutely fantastic artwork by Francesco Francavilla, this book featuring the gang and the infestation of zombies was an instant success.

Following in the footsteps of Afterlife With Archie was the all new Sabrina comic which stayed with the more adult theme as well. I have not read this book but have heard nothing but fantastic things. Once the trade paper back comes out I will catch up on it but as of the writing of this article issues one and two are both sold out.

So, in what has to be the strangest and most awesome mash up that I have ever seen, partly due to my love for both properties. Dark Horse Comics and Archie Comics has joined forces to bring us Archie vs. Predator. Yes, the alien hunter himself has his sights on the Riverdale gang. I wish I could continue this article by raving how awesome it is but the book is littered with a few problems. However, being the first issue in this series I will cut it a few breaks.

The story is basically a normal Archie teenager style story with just a sprinkle of the Predator itself. This is not a dark story or at least not as of yet and not visually which actually works quite well for this story. The writing is like any other Archie Comic which may not appeal to the older reader. My love for Archie and the gang go way back so I can appreciate the innocent style story with Betty and Veronica still vying for Archie's affection. There is a touch of blood towards the end when the Predator finally does make an appearance. 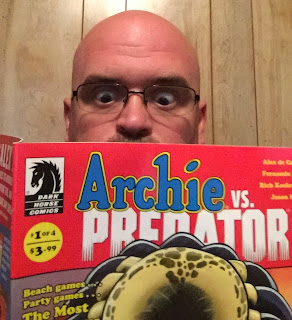 If you pick up this issue expecting non stop Predator killing the Riverdale gang action, then you will be disappointed. This storyline is going to span four issues so I am hoping things pick up from here. It will be interesting to see how they handle this story and how far they will be willing to go. From what little we have see the Predator, I absolutely love the cartoony style that they went with. Rather than a scary version they go with a cutesy version and definitely stay true to the Archie tradition.

There is one glaring problem I have with this particular issue of the odd crossover comic event. Towards the end of the issue, there is a panel which has Betty in it that makes absolutely no sense to me. I have re-read it several times and for the life of me cannot figure it out. If you know what I am talking about and can explain it to me please feel free to contact me.

That being said, I still recommend picking up Archie Vs. Predator especially if you are a fan of either one of its title characters. Even if you aren’t a fan, this really has to be seen to believe. This story probably shouldn't exist but because two of the smaller comic book companies took a chance, it does. And I am really glad that there are creative people in this world that are finding ways to get readers to the story.

I am R.T. Ewell (but you can call me Richard if you see me in public) & I'm a nerd who is also a self published author. While I also have the privilege of being Needless Thing's resident Lego fanatic & reviewer. My first novella Fat Trapped was released in 2013 (available on Amazon Kindle) introducing the horror world to The Blankenship Family. Some random likes of mine are the Batman villain Bane, Jeff Smith's cartoon epic Bone, and the 80's BMX movie RAD.