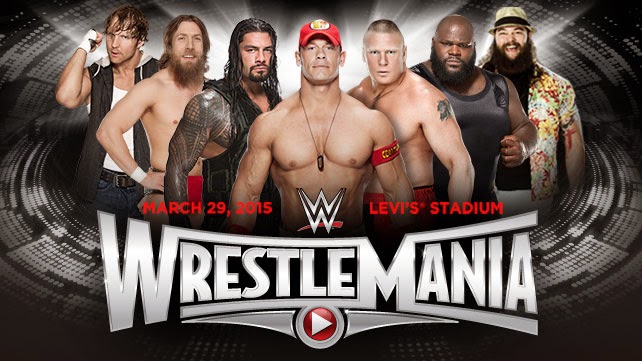 The biggest night in wrestling has come and gone. That's right, dry your eyes, the next Wrestlemania is only a year away. But for now you just reminisce about the one that took place on March 29, 2015. I will admit that I do not watch RAW on a weekly basis because of the lack of cable that exists in my house. I do however have the WWE Network and keep up as much as I can. I do know that once Roman Reigns won the Royal Rumble all the air was let out of the road to Wrestlemania balloon. No offense to Reigns but the fans knew that he was being forced down our throats. And we don't like that. We want to choose who the champion is. Alas, that's not the way it is.


So the main event remained. Brock Lesnar vs. Roman Reigns. But before we get to that, lets look at the rest of the night. Well, not all of it but the stuff that I found interesting.

The intercontinental match was as good as was expected, at least by me. It wasn’t the best but had some good spots while spotlighting six of the WWE's best talent. Oh and Stardust was in there too. I kid, I kid. Daniel Bryan won so that made the crowd happy to start the show off right with positive energy running throughout the stadium.

If you ask me who my least favorite wrestler is and has been for years in the WWE, the answer will always be Randy Orton, hands down. Just something about him I have found incredibly boring. His wrestling, his interviews, and its not that he's bad at either one. He's just boring. But the in ring chemistry he has with Seth Rollins is undeniable. A lot of that has to do with just how awesome and athletic Seth Rollins is. Their match was easily one of my favorites of the night plus Orton's RKO that got him the win was one of the coolest moves of the night. I must admit, I popped pretty big for that one.

A match that nobody saw coming especially about twenty years ago is Sting vs Triple H. Let's start with the entrances. Sting's entrance with the live drums was interesting but the music he comes out to in the WWE is just lame. I love the crow call at the beginning even though its an even bigger reminder that Sting's look is just a ripoff of James O Barr's character The Crow but the rest of the music is too dramatic. When HHH's video hit, I wasn’t sure what was happening but then all too familiar music started playing. I have written how Terminator 2 is one of my favorite movies of all time so I immediately recognized the music. Triple H is known for having some amazing Wrestlemania entrances but he had a lot to live up to after last year's awesome production. Terminator Endoskeleton's appeared on the stage while Triple H rose from underneath the stage. He was wearing an awesome mask/crown along with these terminator arm contraption things that looked a little cheesy but I was geeking out over it the whole time.

I was really worried about the match going into it mainly because of Sting's age and over the past few years he hasn’t been at his best. We should have all seen how they were going to solve this problem, especially when they started promoting the match as WCW vs WWE. The actual wrestling match wasn't bad, Triple H has shown that he can carry or improve a match when needed. However, when you ask people about the match, few of them are going to talk about the match itself. Instead, they will talk about how for the first time ever we saw the NWO vs DX. This was very exciting to witness as we had all of DX including an appearance by Shawn Michaels and Hollywood Hogan. The live crowd popped huge for this confrontation as did my living room.

Here is a little side note on the Diva's tag match. No matter how good the women's/diva's matches are, the WWE has brainwashed me over the years into not caring at all.

The Rusev/Cena match pretty much went exactly how everyone thought it would. Cena used to be known for his entrances at Wrestlemania but the past few years that has not been the case. Tonight, he just had a little video package before his music hit and he came out like normal. Rusev, however, did not come out like normal. He came out on a frigging tank which was very cool. The match wasn't bad and I'm pretty sure every single person picked Cena to win to which they were correct. I actually kind of like the fact that Daniel Bryan and John Cena have the belts they currently hold. I am hoping it brings back the importance of each title.

I am still not sure what the point of the Bray Wyatt/Undertaker match was. Wyatt is one of the most interesting characters the WWE has and my personal favorite. Over the past two years the WWE has done their best to just absolutely bury him. I can't think of an important match that Wyatt has won, he loses them all. Sure his interviews are awesome and he doesnt typically back down from challengers while even calling out the Undertaker at the Fast Lane PPV. But I would love to see his win/loss record. I'm guessing his losses outweigh his wins by a lot.

After the Lesnar/Taker match last year I wasn't too excited for this one. Undertaker did not look good last year. Brock may not have been the best opponent for Taker either so that may not have helped matters. This year, the deadman looked much better, physically and in the ring. The match wasn't anything special but did have some cool moments. Including, Wyatt doing his spider crawl move which still impresses me for a big man, only for Taker to do his creepy sit up maneuver. I really wanted Wyatt to win this one because I think he would gain more than Undertaker winning since the deadman hasn’t even made an appearance on WWE television since last Wrestlemania. Alas, Taker got the win and Wyatt took yet another loss.

I found The Rock/Ronda Rousey/McMahon/Helmsley segment to be boring and pointless. Maybe if they had setup a Rock vs Triple H main event for next years Wrestlemania it would have made sense. Instead we got talking after talking and a lame attack on Stephanie by Ronda Rousey which I thought was pretty pathetic. Some people may have liked it but I thought it was an enormous waste of time.

I don't know anybody that was actually excited about the actual main event. Not even a promo and the support from The Rock could help Reigns gain popularity from the WWE universe. I have loved what they have been doing with Brock over the past year. I can't remember the last time the WWE has created such a monster while adding importance to the championship title. The crowd was against Reigns from the beginning of the match so anytime he got on the offense, the stadium was filled with boo's from the fans. 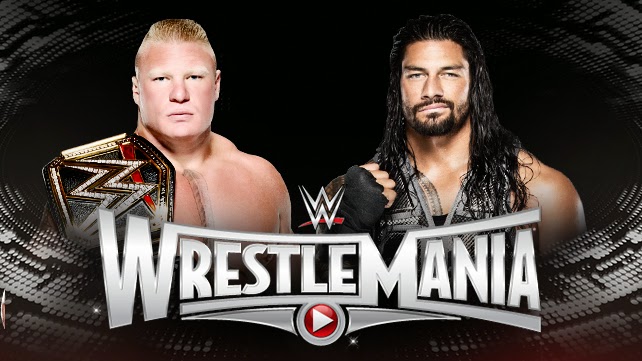 I didn't really expect Brock to dominate as much as he did. I really thought that they were gonna have Reigns look more impressive. Instead, Lesnar pretty much wiped the floor with a Roman Reigns shaped mop. Eventually, Reigns did do some offense while taking the beating that Brock was giving him with a smile at times might I add. Just when the match seemed to be getting a bit boring and with both men beat down, music began to fill the stadium. It wasn't just any music, it was the music of Mr. Money In The Bank, Seth Rollins. That's right, on the biggest stage in wrestling, he was cashing in his contract for a title shot. Which in turn now made the match a triple threat. It wasn't long before Rollins pinned Reigns to indeed win the title. I never thought that they would have used the Money In The Bank contract to end a Wrestlemania but really they had no choice with this situation.

In a perfect world I think it would have been cool to see Heyman turn on Lesnar joining Reigns while helping him win the title. But the chemistry between Lesnar/Heyman is undeniable so it makes perfect since to leave them together. The great thing about Brock is they have made him such a bad ass that it's easy to cheer for him so I am hoping they turn him a hardcore face now.


I was not excited for this Wrestlemania at all as far as the card went but it's always a fun event. It turns out the WWE delivered a very entertaining show thanks to its talented roster. The last Wrestlemania that I enjoyed like this was Wrestlemania 24 which took place in Orlando. This one just felt fun with very little fluff. Although, normally I would hate the film tie in with Triple H's entrance because they were a sponser, but come on, its the frigging Terminator. It's not like it was Robocop or Chucky from Child's Play, which sadly both have made their way into the wrestling world at one point or another. I think anyone that watched this years Wrestlemania would have had to come out really enjoying it. The WWE product of late can be frustrating at times but there is no denying that on the show of shows, they delivered.