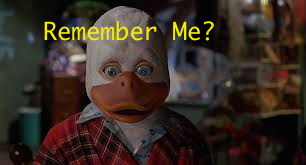 It wasn't that long ago that Marvel movies were absolutely awful. The 80's and 90's saw some really terrible movie versions of our beloved comic books. We tend to forget that Captain America and the Punisher both saw very unsuccessful feature length versions which were both in the nineties. The Punisher starred Dolph Lundgren and wasn't a dreadful movie but it was not at all faithful to the comic. If I remember correctly, a skull never even appears on his chest.


Captain America (1990) was a fairly faithful version that I actually liked. It may have been too faithful because I also remember it looking a bit ridiculous. Matt Salinger was Steve Rogers and the teenage version of myself liking the adaptation very much so. I haven’t seen it in years but it is now available on Blu Ray which is kind of astonishing to me. Excuse me while I go order this...

Okay, we now return to your regularly scheduled article.

There was also Howard The Duck but I won't go into too much detail on that one. Other than the fact that I was that movie's target audience and I hated it as a kid. There was also 1994's Fantastic Four which was probably comic book accurate but bad enough to be shelved, although rumor has it, it was purposely shelved. So really the beginning of the upswing of Marvel movies began with X-MEN in 2000. I really thought X-MEN was in the late nineties but my movie knowledge seems to be lacking these days. Spiderman was also an important part of Marvel's movie success.

Seemingly there weren't any problems, right? Well, wrong. Marvel had to sell the movie rights to the studios in order for the movies to be made. At the same time they were kind of giving control over to the studios. It got real obvious with X-MEN 3 & Spiderman 3 & Ghostrider & a few others that their properties weren't being treated with the respect that they should have been. So Marvel implemented a plan and it all started with Iron man. A somewhat suprising move to start with the lesser known Iron Man but a character that was cool enough to handle his own movie. Both comic book fans and non-comic book fans alike fell in love with Tony Stark and more importantly Robert Downey Jr's portrayal.

Every movie that Marvel studios has launch has been a success. A huge massive success. They can say The Incredible Hulk wasn't but only because it was not as big as they wanted it to be. Wah, boo hoo. Now, thats not to say that every movie has been good because they havent and my thoughts on Marvel movies since their plan has been put into place will probably infuriate comic book nerds everywhere.

Iron Man was a great movie. Iron Man 2 was a bad movie. Many people think Iron Man 3 was great but given the choice I would much rather sit through Iron Man 2. Thor was a good movie. Thor 2 was a bad, bad, really bad movie. Captain America was a good movie but it still felt like a really long trailer for the Avengers, which it kind of was. I still havent seen Captain America 2 but I've heard good things so I'm excited to one day watch it. Avengers is not a great movie, its a good movie that doesnt do anything stupid to make comic book nerds mad. I have only seen it one time so that says what my thoughts on it were. I think the kid version of me would be watching it on repeat to this day but the older version of me has a tougher time with it. I enjoyed it but not enough to invest more time in viewing. Although Loki is enough reason for me to watch anything more than once.

It just bothers me that Marvel gets a pass because the movies, even if bad, don't absolutely suck. As for Guardians of the Galaxy, I enjoyed it but it was hard for me to watch. To me, it tried to hard to be funny and the way they were all smart asses to each other got on my last nerve. I would watch it again and probably say I enjoy it but I am not hyped up on it like most.

As far as Avengers 2 goes, I don't currently have plans to see it. I want to see it. It looks good and I like some of the story lines Ive heard that are in it. I am actually more excited about Captain America: Cival War but that too is for another blog. I think I'm more excited about the new Marvel movies because they don't absolutely suck. And more importantly these movies for better or worse are watched over by the company themselves. I do like the fact that Marvel ties the movies together and like the fact that they have a long term plan even more. It may sound like I hate the newer stuff by Marvel and that is not the case. At least they are better than they used to be.

I am R.T. Ewell (but you can call me Richard if you see me in public) & I'm a nerd who is also a self published author. While I also have the privilege of being Needless Thing's resident Lego fanatic & reviewer. My first novella Fat Trapped was released in 2013 (available on Amazon Kindle) introducing the horror world to The Blankenship Family. Some random likes of mine are the Batman villain Bane, Jeff Smith's cartoon epic Bone, and the 80's BMX movie RAD.