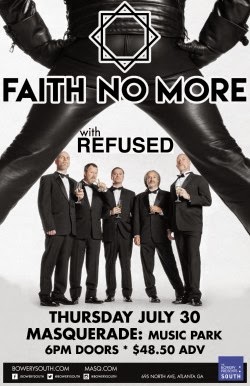 I’m so excited right now that I couldn’t possibly review anything, even though I’ve got a bunch of DC Collectibles stuff, Marvel Legends, and who knows what else built up in my Pics folder. My brain is racing. So I’m going to churn out some stream-of-consciousness stuff so I can at least fool myself into believing I’m being productive.
The reason I’m so excited is that I just bought tickets to see Faith No More on July 30th at the Masquerade Music Park. The Music Park isn’t my favorite place, but I really didn’t think I’d ever get to see my favorite band in the history of music play live again. Lots of bands seem to like to just skip over Atlanta when they do smaller tours.

I am also considering going to Raleigh the next night and Philadelphia the night after that.
I won’t actually do that, but I’m thinking about it.

All of this from a guy that was pretty harshly critical of a recently purchased Faith No More “import” album that was recorded in Germany in 2009.

I suppose I should explain that.

I have three live albums from the band. Live from Brixton Academy - an official release – an “import” from after Angel Dust, and a German release from 2009. The sound quality varies between them, but they’re pretty solid performance-wise. The new one has okay sound quality, but the performance is pretty erratic. By which I mean Mike Patton fucks around and just plain doesn’t sing portions of songs a lot.

I love Mike Patton. He’s one of my heroes. He was one of three people I was pretty sure I’d die if I met until I met him and he was very nice and we talked about food for maybe fifteen or twenty minutes (that time has jumped around since this happened and I’m honestly not sure how long it was, but it was longer than a brief chat). I think he’s got the best voice ever and everything he has done in his career has been at the least interesting. From Faith No More to his challenging solo albums to Fantômas to Mondo Cane; I’ve followed it all. I don’t like it all, but I appreciate the body of work.

If you are familiar with his stuff you know that Patton does weird stuff. But Faith No More is different from the experimental projects. I wouldn’t call it pop music, but there’s a format and I don’t necessarily love it when he deviates too far from the format. And we’re talking really far because when I go to a live show I’m actually disappointed if the band just straight-up plays the albums. I like improvising and playing around. But I was not super impressed with Patton’s vocals at that German show. To the point where I was a little wary of seeing them live again and potentially spoiling my current awesome memories.

I’ve told the story many times, but I was working at The Masquerade when I saw them in ’97 and I got to sit right there on the stage and watch. It was incredible. That was also when I got to talk to Patton. That’s a great fucking concert memory.

I will say this – in 2009 Faith No More didn’t have any new music to play. While their reunion was fresh, the music was the same stuff they had been playing a decade before. My hope is that the infusion of new material from their new forthcoming album, Sol Invictus, has reinvigorated everyone and that maybe things will be a bit more on-point.

Also, I am a little scared that someone from Faith No More might read this. I know that sounds ridiculous, but you must remember that Joey Belladonna read my tribute to Anthrax a few years ago. These things happen (Faith No More – if you do read this I’m sorry and you’re perfect and would you like to come on my podcast?).

The point is this – I love Faith No More and there’s no way I’m missing this show. I took a day of vacation from work because they have restricted the schedule to the point that there is no other way to get a day off. It stinks to have to use twelve of my hard-earned vacation hours, but it’s worth it.

Email ThisBlogThis!Share to TwitterShare to FacebookShare to Pinterest
Labels: faith no more, music