I’m going to have a busy weekend.
It’s been far too long since I’ve gotten up in front of people and performed in any capacity. My day job has prevented me from taking a couple of opportunities – sorry, Possum Kingdom Ramblers – and when I have been available there just hasn’t been anything going on. I’ve been pathetically slack about scheduling another Whose EFF is it, Anyway? because I’m lazy and I hate organizing people; even reliable ones. And for a time it looked as though Monstrosity Championship Wrestling might be dead.
Here’s the thing about Whose EFF – it takes a decent bit of work and planning to make it happen. Sifting through all of the slash fic on the internet isn’t easy. And once I’ve scheduled it with Miss Lady Flex and Sexy Wolverine, it’s a done deal. There wouldn’t be any backing out. And then, for all of the work involved, if we do it anywhere other than Dragon Con there’s no guarantee we’ll have any kind of audience. I am absolutely terrible at promoting events and I don’t want to do everything involved with scheduling a Whose EFF and then only have eight people show up. And six of those would be friends of ours.

Not that I have any problem with entertaining friends, but I can do that from the comfort of my home.
So Whose EFF has proven to be a different thing than I thought it would be. I was hoping for a quarterly event, but it may just be a Dragon Con thing. Which makes me sad because I’d really like to work with Dana and Rueben more. They’re exciting and I think they bring out good things in me.
But there are other things to do, and I’m doing them this weekend.
On Friday night, Monstrosity Championship Wrestling will be returning to The Masquerade, along with two other promotions. I’ll be hosting along with my best ghoul gal pal, Ghouella Deville. Here’s the card:

Wrestling with Pop Culture
Presents
Culture Shock at The Masquerade
Wrestling with Pop Culture celebrates its fourth anniversary with an extravaganza of wrestling, music and other entertainment in Heaven at The Masquerade on Friday, March 13, hosted by Needless Things‘ Phantom Troublemaker and Ghouella Deville!
In their debut event, the ladies of ROAR Women’s Pro Wrestling take you to heaven with all-female action featuring the Bullet Club’s Amber O’Neal Gallows and Amanda Rodriguez taking on Devyn Nicole and My Big Fat American Gypsy Wedding‘s Priscilla Kelly, Jessie Belle vs. Sara Nox and Resistance Pro Women’s Champion Mickie “Moose” Knuckles in action.
Atlanta Wrestling Entertainment pits Team Jimmy Rave (Rave, Murder One, Raphael King and the “No Pain Train” Iceberg) against Team Chip Day (Day, Kyle Matthews, Mike Cruz and Resistance Pro Heavyweight Champion and Strong Style Heavyweight Champion Sugar Dunkerton) in its main event. Owen Knight takes on Jake Hughes and Put Over the World (Caleb Konley and Zane Riley) takes on The Circle of Disrespect (Francisco Ciatso and Simon Sez, with Kevin Pierce) in other AWE action.
In a special Friday the 13th frightful feature match, Monstrosity Championship Wrestling Underworld Champion “The Lethal Dose” Stryknyn defends his title against “The Violence Artist” Trever Aeon. Other MCW stars such as Dragula, the Kentucky Wolfman, the Chattanooga Wolfman, Papa Marko, End Zone (with Quozzy Quozzbourne) and Total Wrestling Entertainment Champion Drew Game will also be part of the event, with commentary by DeWitt Dawson and Son of Celluloid‘s Nathan Hamilton!
Ascension’s DJ Lechter spins industrial, goth, rock, hip-hop and metal between matches, with a sideshow performance by Captain & Maybelle (as seen on America’s Got Talent and The Hunger Games: Catching Fire)!
Atlanta Beverage Company will be launching its new Day of the Dead beer at this event. Get there early for a meet and greet with the stars of the show, including former WWE SmackDown General Manager and National Wrestling Alliance Hall of Famer Teddy Long! Doors open at 8 p.m. Bell time is 9 p.m. Tickets are only $13 in advance, $15 at the door and can be purchased here.
This is a kickass card.

Mickie Knuckles is the chick that broke her fucking femur and then came back to wrestling. She will be the toughest person in the building by far and I can’t wait to see her in action.
The AWE main event is just stupid good. Those eight guys are going to put on a heck of a match.
As for MCW, Trevor Aeon is quick, exciting, and a heck of a competitor, but Stryknyn is one of the meanest, toughest motherfuckers I’ve ever seen. Aeon definitely has a speed advantage is capable of some dazzling moves, but if Stryknyn grounds him and gets his hands on The Artist, it’s going to be over quick.

I’m excited to be getting out and doing some ring announcing again and I’m really excited that it’s for such a big event. I’ll be the general host and ring announcing for MCW, but ROAR and AWE have their own announcers, so I’ll be hanging out and partying. Buy me a beer.
The rest of my weekend will be spent at Joelanta and The Great Atlanta Toy Convention’s big event at The Marriott Century Center. 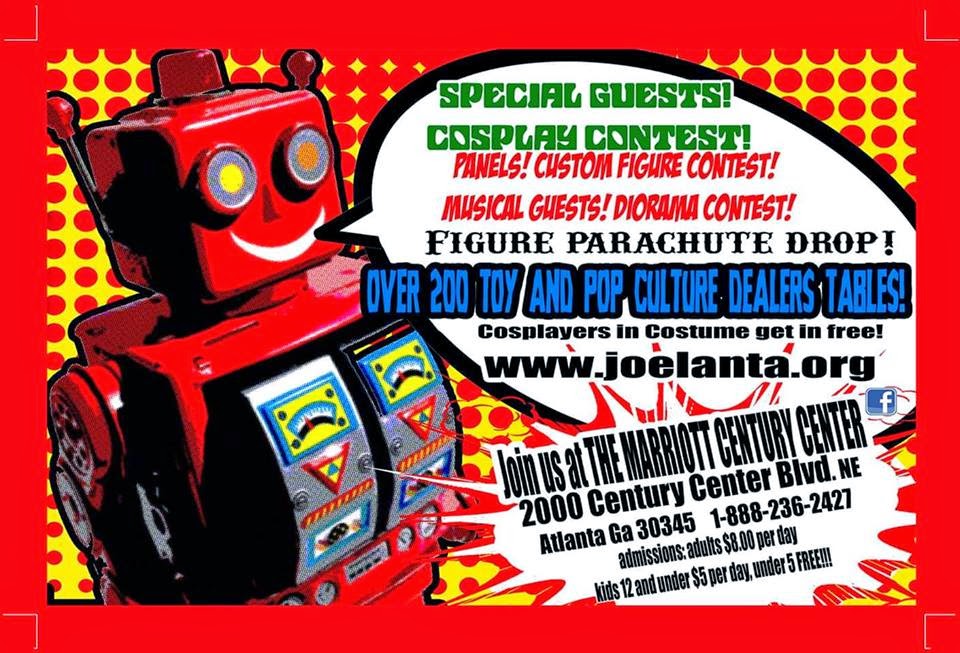 If you’ve been following the site or the Podcast, you know that this is a huge deal to me. Toys are obviously a central part of Needless Things, and this convention is all about toys. I’ll be presenting a panel for Needless Things called The History of Character Toys, where I’ll be discussing how toys and licensing have interacted over the years. Here’s the blurb:
2-2:45pm History of Character Toys Panel: Join Phantom Troublemaker as he brings the informative and interactive Needless Things Toy Panel to the Great Atlanta Toy Convention for the first time ever!

Phantom brings the experience and enthusiasm of over thirty years of toy collecting to a group session where everybody gets to learn and have fun. The subject of the Great Atlanta Toy Convention panel will be Toys of Character – the history of our favorite licensed toys! From the earliest days of Mickey Mouse and Buck Rogers to modern-day toy aisle monsters like the Teenage Mutant Ninja Turtles, we’ll jump around the history of plastic characters and let you, the audience, determine where we land!

Come on out for toy talk and prizes, and bring stories of your own favorites to share with the crowd!

Be sure to check out NeedlessThingsSite.com and the Needless Things Podcast for toys, music, movies, wrestling, and all manner of pop culture dorkery!


I’ll admit that I got a little huckster-y with that one, but I’m playing to a largely unknown audience. I wanted to sell it the best I could.
So that’s Sunday at 2 PM, but there’s all kinds of other stuff going on all weekend, including panels with Larry Hama, Jeremy Fisher from Robot Chicken, and more! Listen to yesterday's Needless Things Podcast and visit Joelanta.org to learn more!