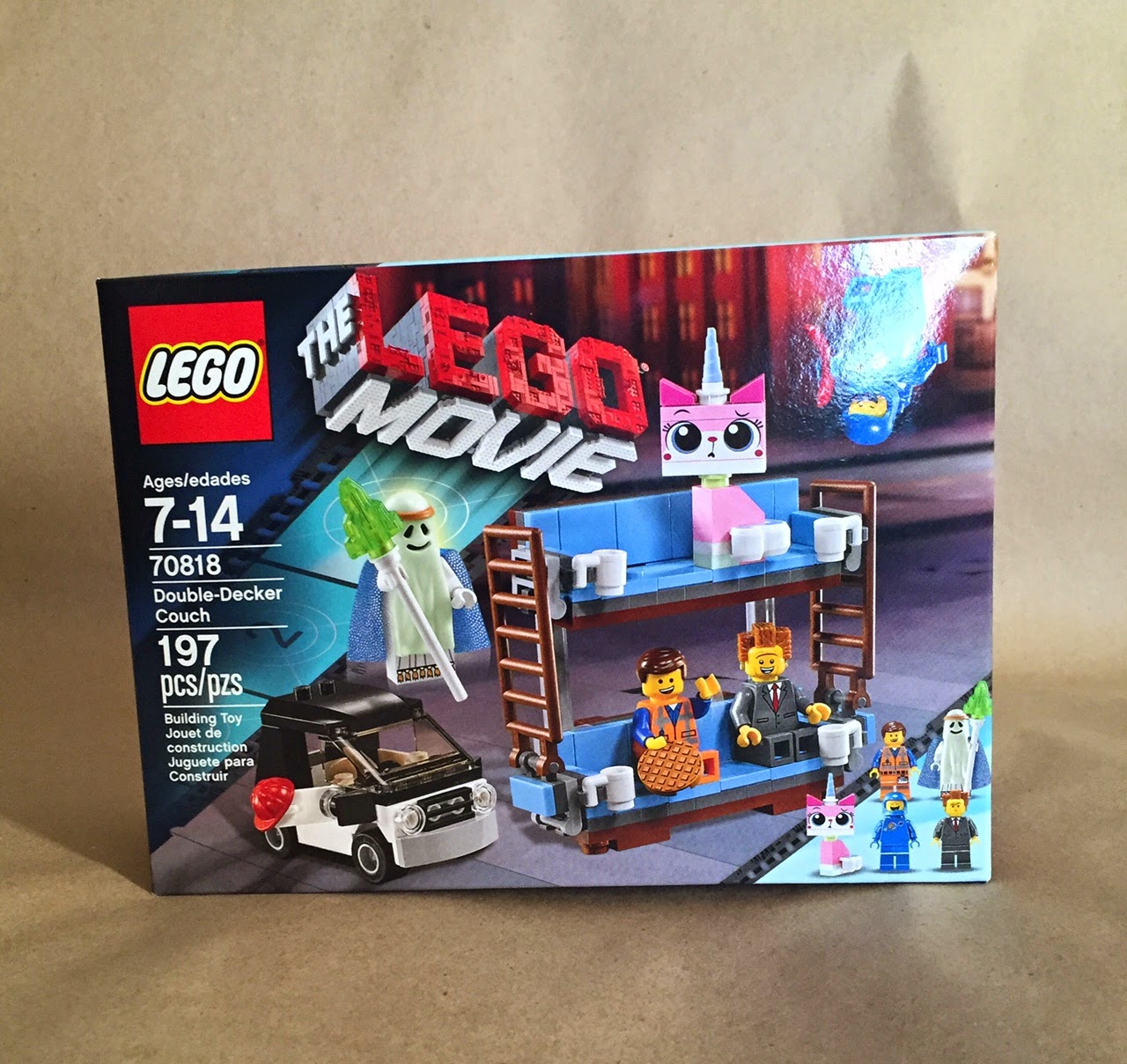 
Ever since The Lego Movie hit the big screen over a year ago there have been many sets released. I have purchased a few of them but I am not a fan of all the vehicles, especially the flying ones, that have been included because I just don't like how they display. If one set was to come out of the movie that everyone wanted, it was indeed the double decker couch. Unfortunately, the only way to get the couch previously was in the Metal Beard's Sea Cow set that is 249.00. It's a gorgeous set that includes the double decker couch but that's a lot of dough to drop on a toy.

Well Lego has given us a way to purchase said double decker couch at an affordable rate as part of their January 2015 release.

To be honest I have never really liked The Lego Movie logo. Just something about it bothers me but If you asked me why I probably couldn't actually tell you. Usually, Lego does no wrong on packaging but for this set it seems way too cluttered. I understand why the mini figures are in the bottom right hand corner but since this is mainly a mini figure set it seems like a bit of overkill. Another thing that bothers me is when they put figures flying in the air,  I know it seems stupid but if the figure can't actually do it, don't show them doing it.

I've been excited about owning the double decker couch (the set, not a real version although I have been tempted..) that there was no hesitation for me to open this bad boy up! I am a bit of a mini figure fanatic so I was ready to finally get my hands on Benny the spaceman and a Unikitty. 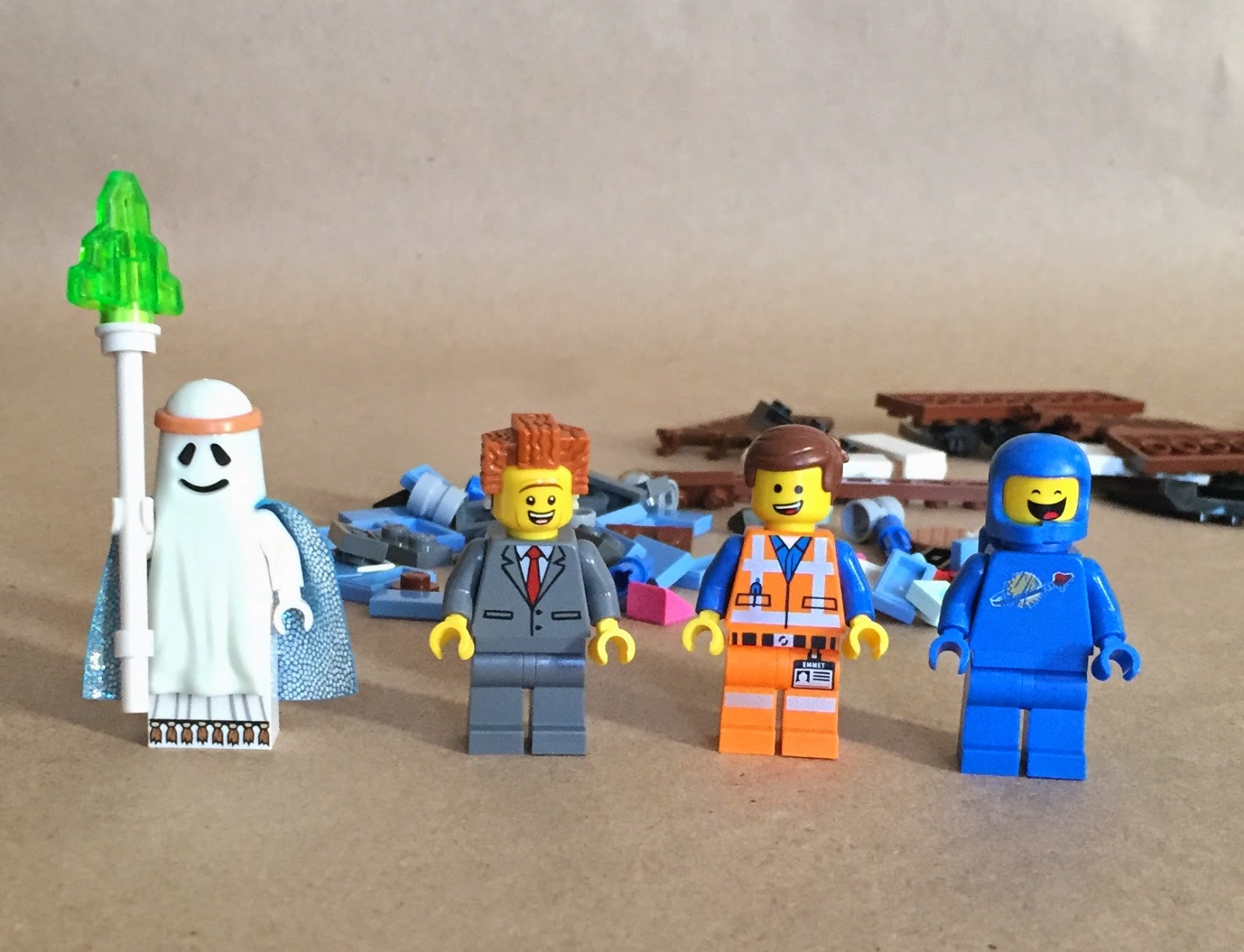 We get a whopping five minifigures in this set which I think is pretty impressive for a 14.99 set. I mean the focal point is the couch so the figures are a nice bonus. Not that we really need another Emmett or President Business minifig but the other three are a nice score. Ghost Vitruvius (which glows in the dark), Benny the  Spaceman & a sitting version of Uni Kitty. 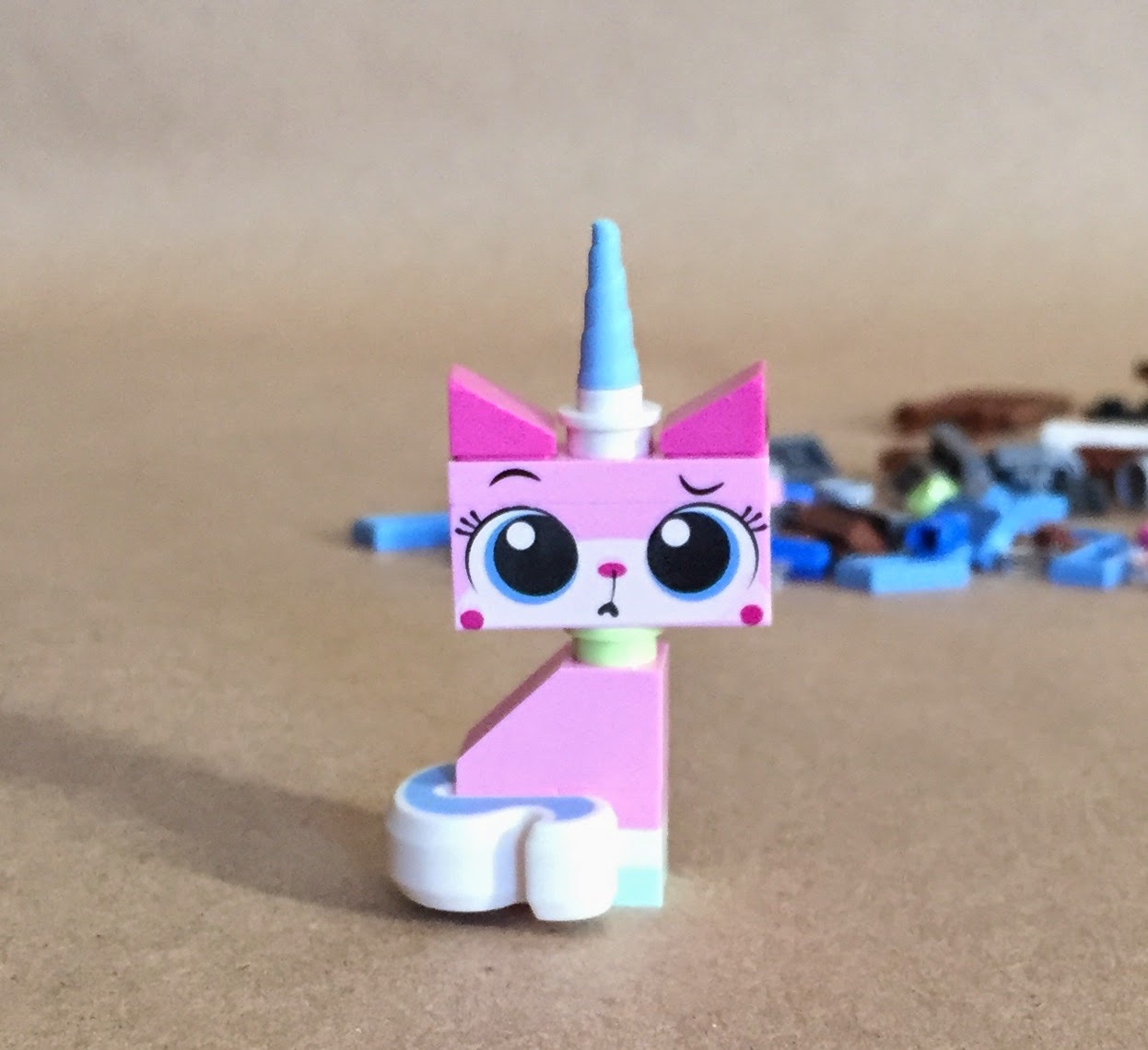 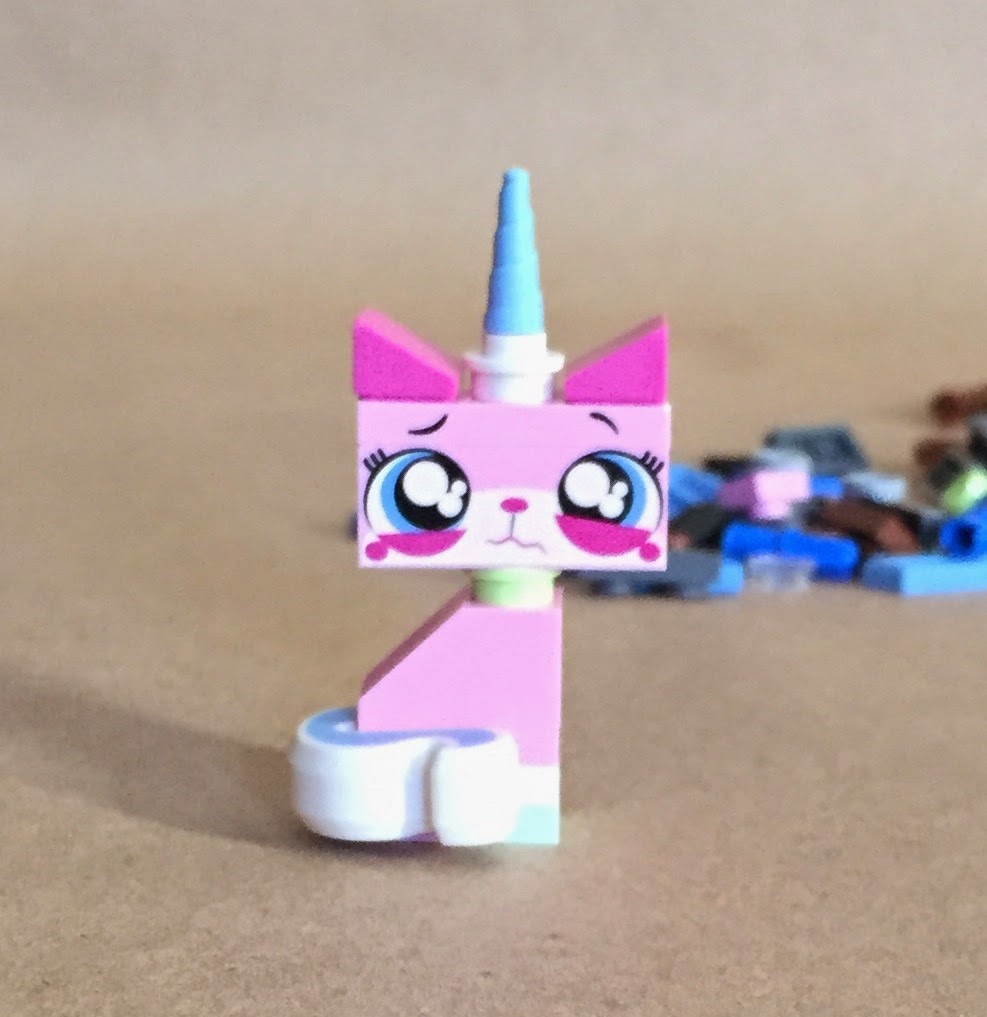 Unikitty comes with two different faces on separate blocks which is nice. Course that means you have to keep up with the other one when not in use so as a collector it's kind of a pain. Also, the neck of this thing is just awful. I would think it would be hard play with this minifig because if you just breathe on it, off with the neck it goes. 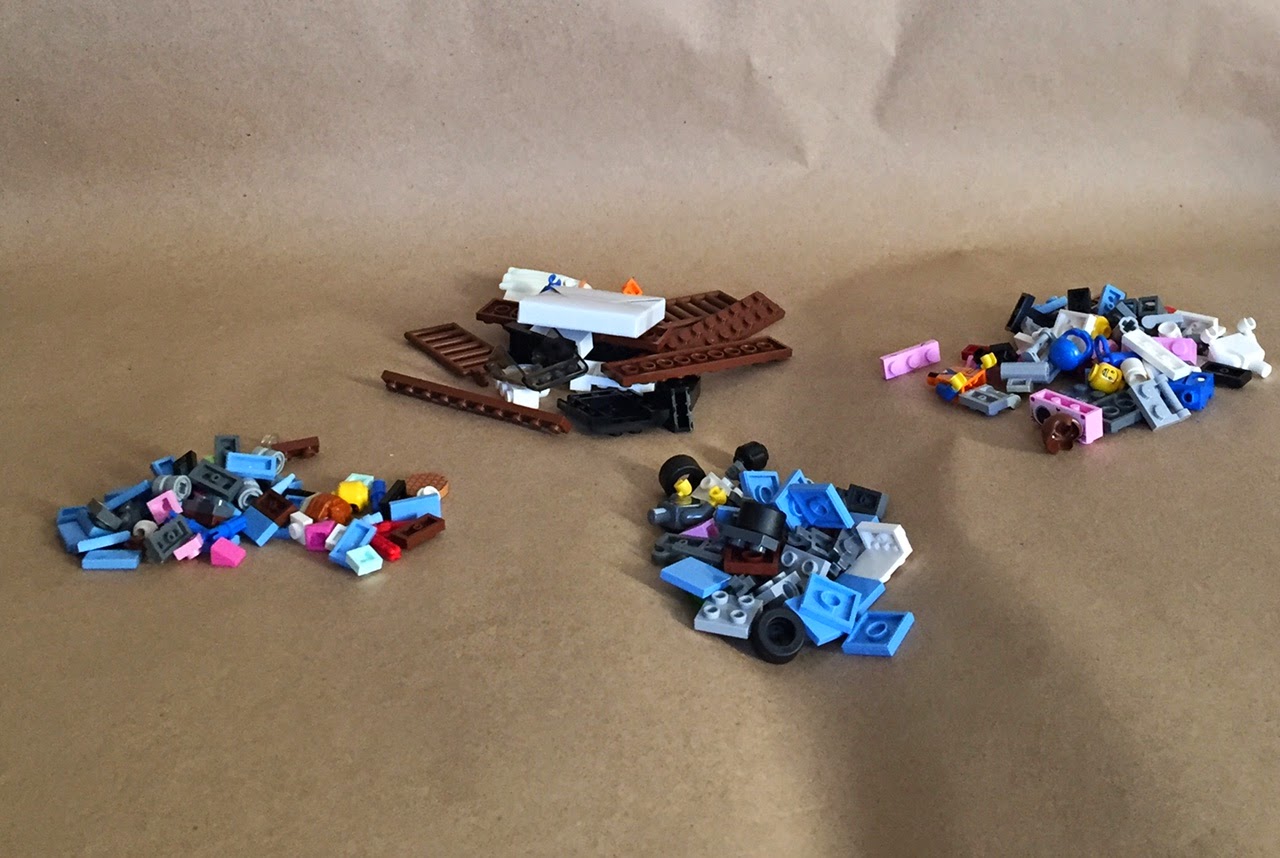 This set had many more pieces than I was expecting and once I began building it, I knew it wasn't going to be as easy a build as I thought. The first thing to build after the minifigs was the little car it came with. I could have cared less about it but as it began to come together that thought would change. 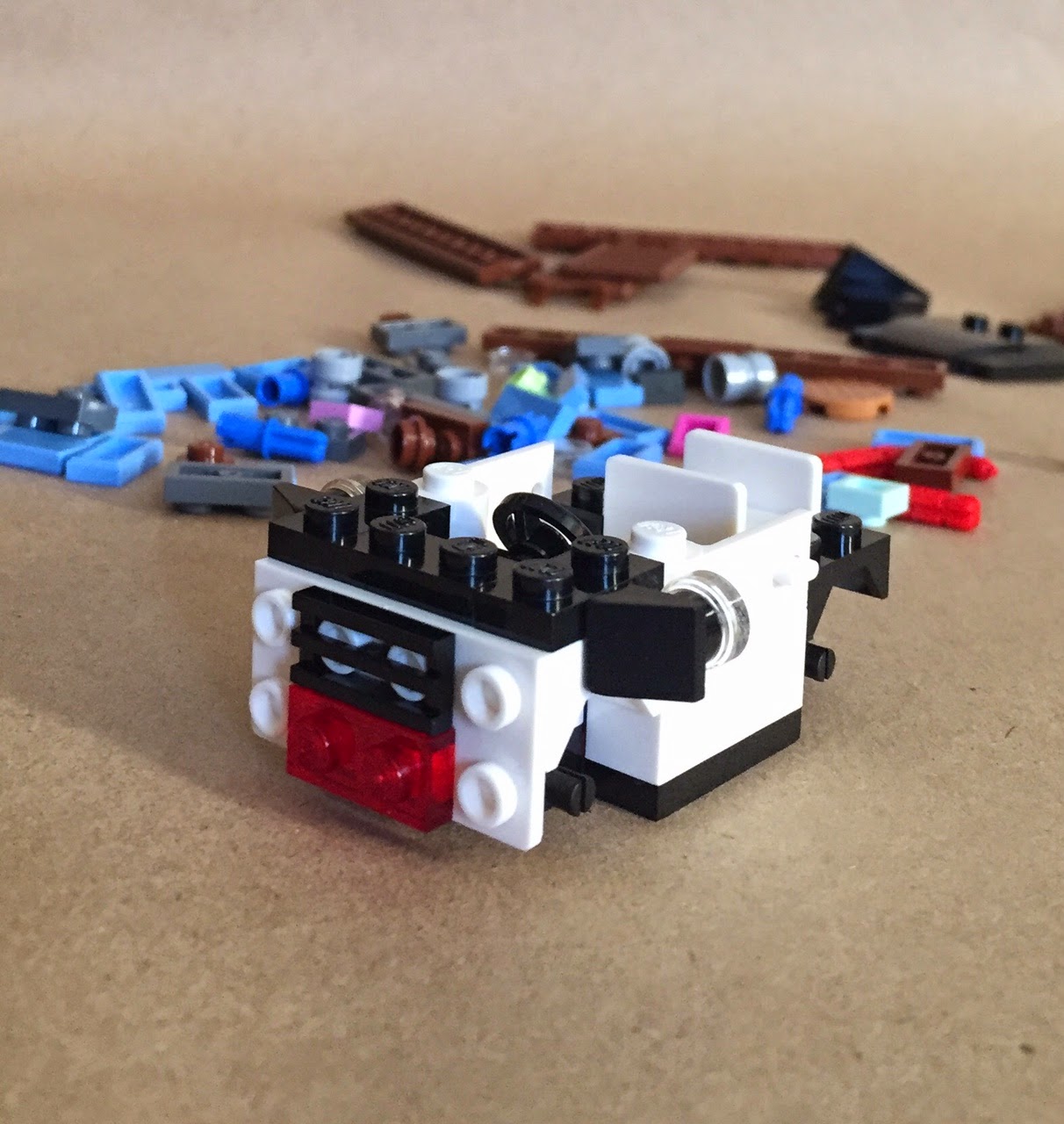 The car is actually really cool. Its much more complicated than it looks but the final look is good. Also, one minifigure fits in this thing with ease (the roof is easily removable which is the only way to get a minifig inside) which is good considering how small it its. 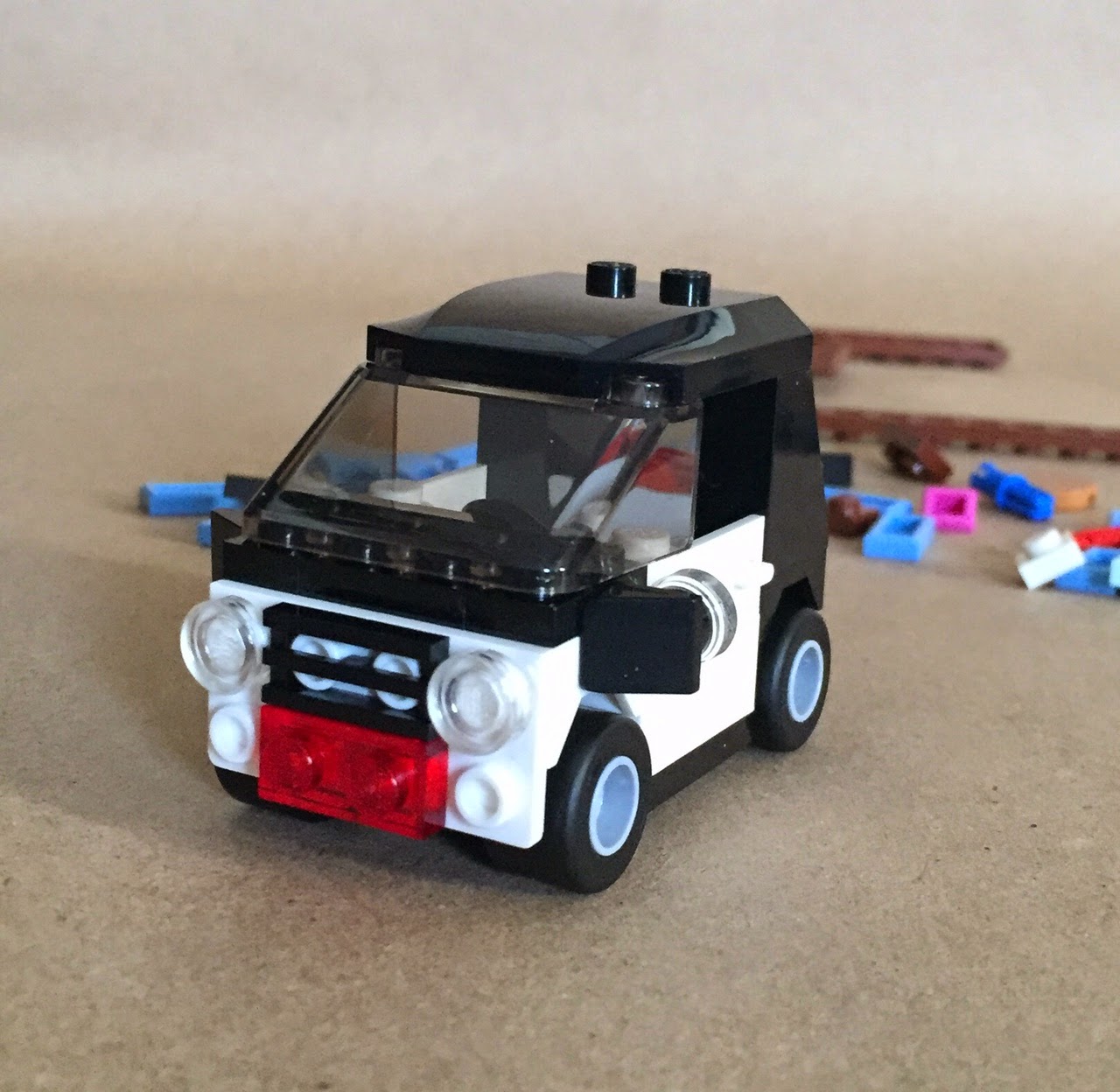 Note: Until after the build I thought I had my first missing Lego piece from a set. Where the red piece is, there should be a bumper but I looked all through my pieces with no luck of finding it. Come to find out I just didn't see the piece until the very end so you'll see the completed car at the end of the review. 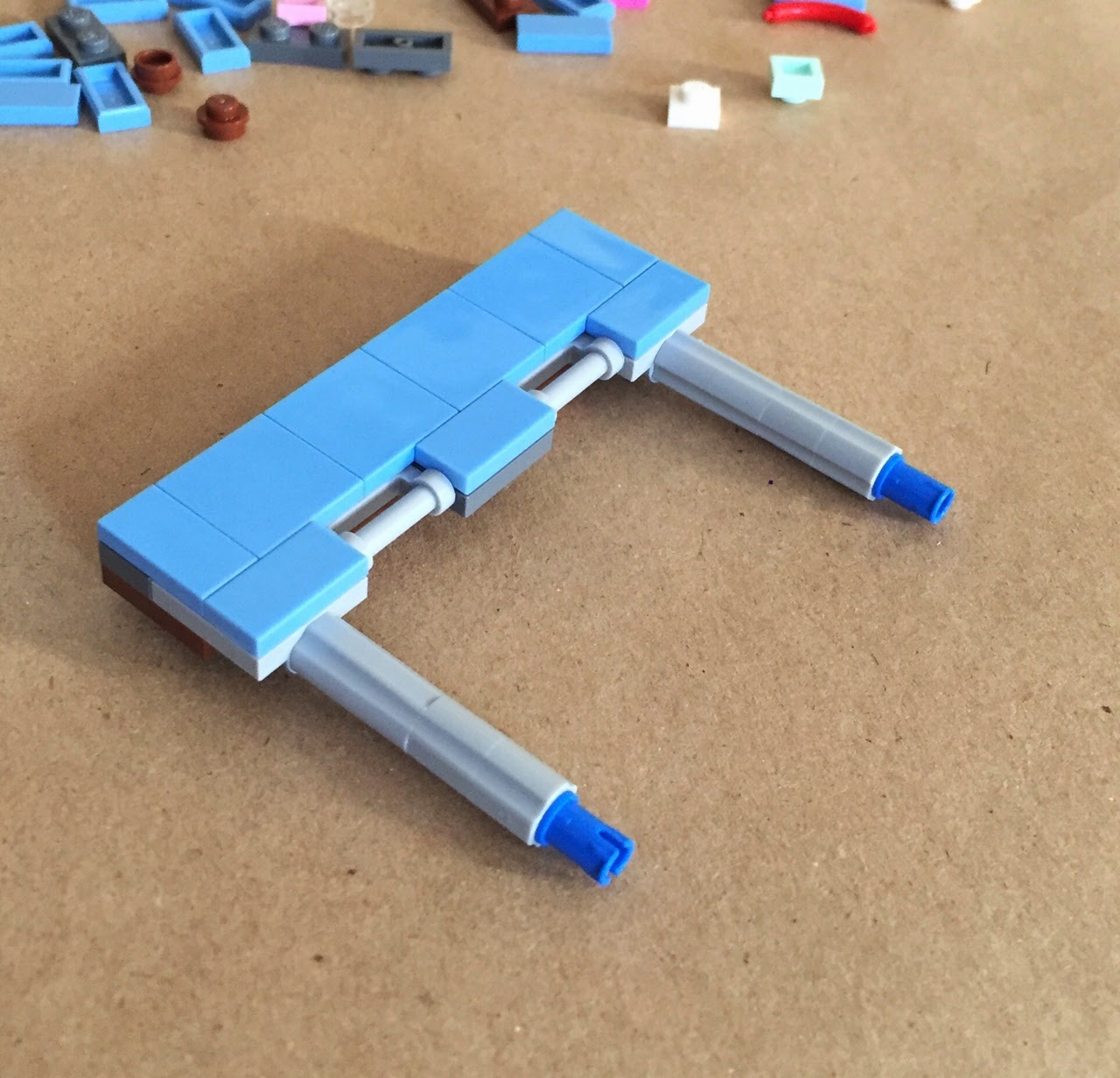 Now, onto the couch which is a much more in-depth build than I anticipated. There are lots of hinges on this one but most of the parts don't move. They are just used to create the cushion and back section  of the couch. There are also a lot of blue pieces that make up the cushions but the pattern is sort of sporadic. Not that it truly matters but the adult OCD builder in me has to have it exact. 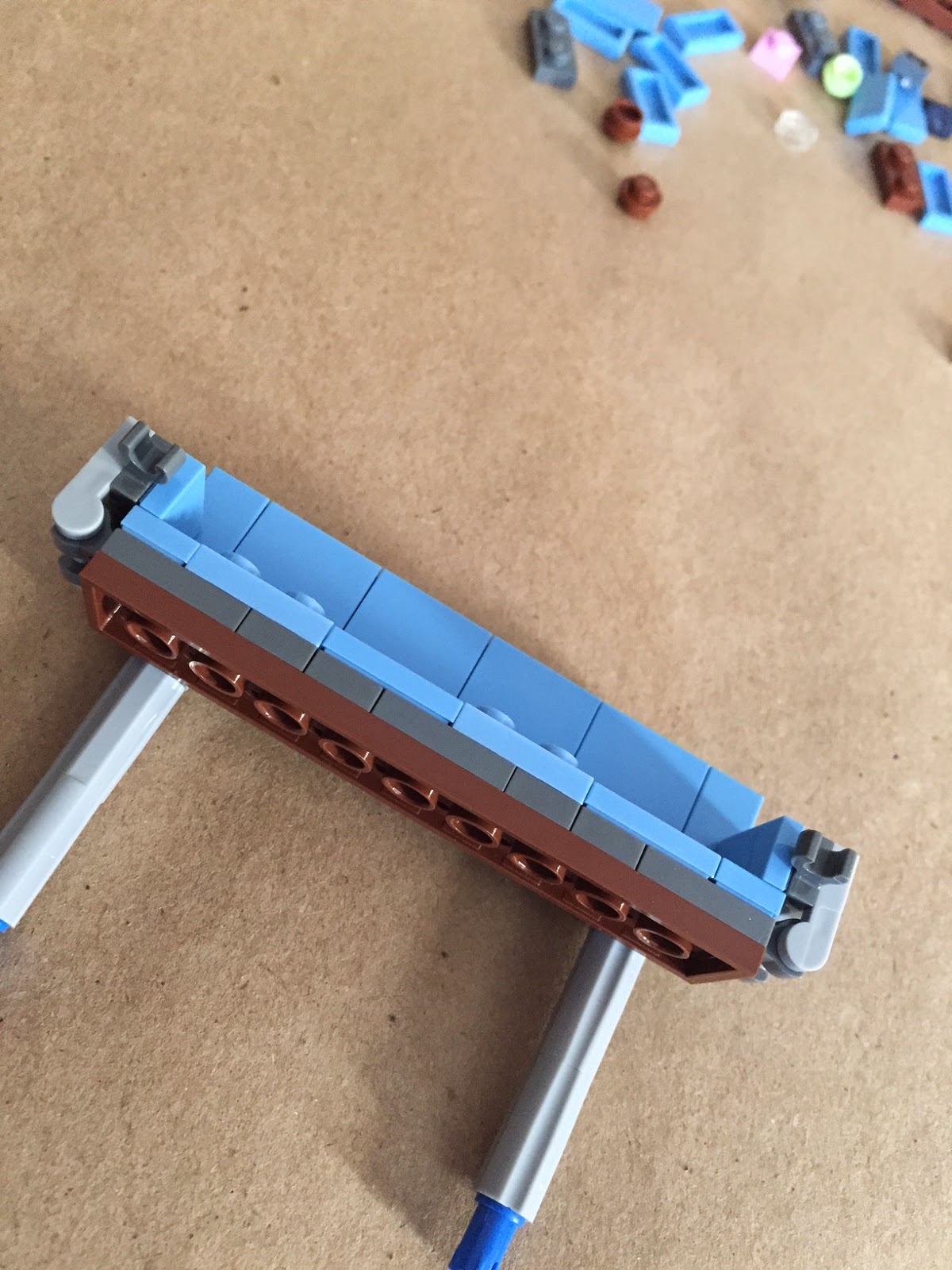 Once the top and bottom couch pieces were built that was pretty much the build. I will say the ladders bother me a little bit on this couch because they are on a hinge at the bottom. They don't lock up at the top which Lego could have easily done so the ladders just rest up against the top bunk. This isn't a big deal because the ladders stay in the up position it's just an observation that bothered me a bit.

Also I am trying to avoid the fact that I didn't take any other build process pictures. Not sure how that happened but really its a double decker couch, you get the gist.

Wheels: A car with moving wheels is fairly obvious but worth mentioning for fun factor.

Doors: Both doors open freely on the car. However, the roof is easily removable which is the only way for putting minifigures inside.

Ladders: I feel obligated to mention that these do in fact move. I mean there is absolutely no reason that they should but they do so I am listing them. 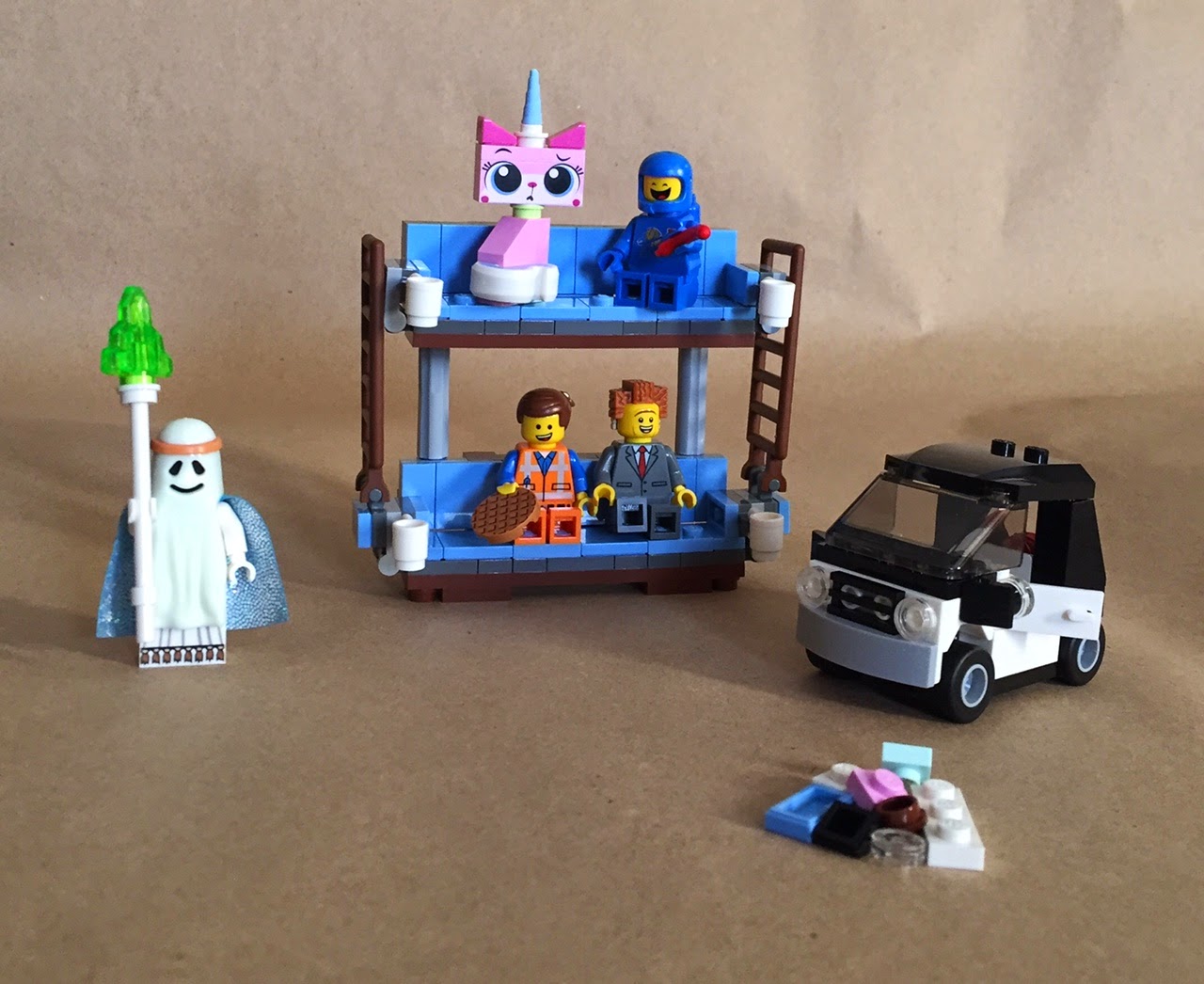 This set displays nicely. The couch seems a little unstable to me but it sits perfectly fine. There was a small pile of extra pieces which is at the bottom of the picture. This is about the normal amount and includes a variety of colors and shapes.

It's clear that the double decker couch is the star of the this set. However, I really think the car is pretty awesome. The amount of minifigures is really crazy to me. For the price and the amount of stuff you get with this set, a fan of the movie and Lego in general would be crazy to pass this one up. I think the double decker couch is just a good conversation piece for any collection and it beats paying over 250 bucks for the other set it comes in.

I want to give this set an insane score like above a five but there is just something stopping me. I can't pin point it exactly whether its the weird ladder situation that has been discussed or the Unikitty with the easily decapitated head. Or maybe its that the couch just doesn't feel solid. I would rather have had a sturdier couch and maybe two less minifigures. This set is still a must have but I think it's mainly for the price. Lego does have expensive sets that are huge but on their smaller sets they really put as much as they can in them so we get more brick for our buck.

Now, I am off to go work on my real life double-decker couch, it will fit nicely in the living room.