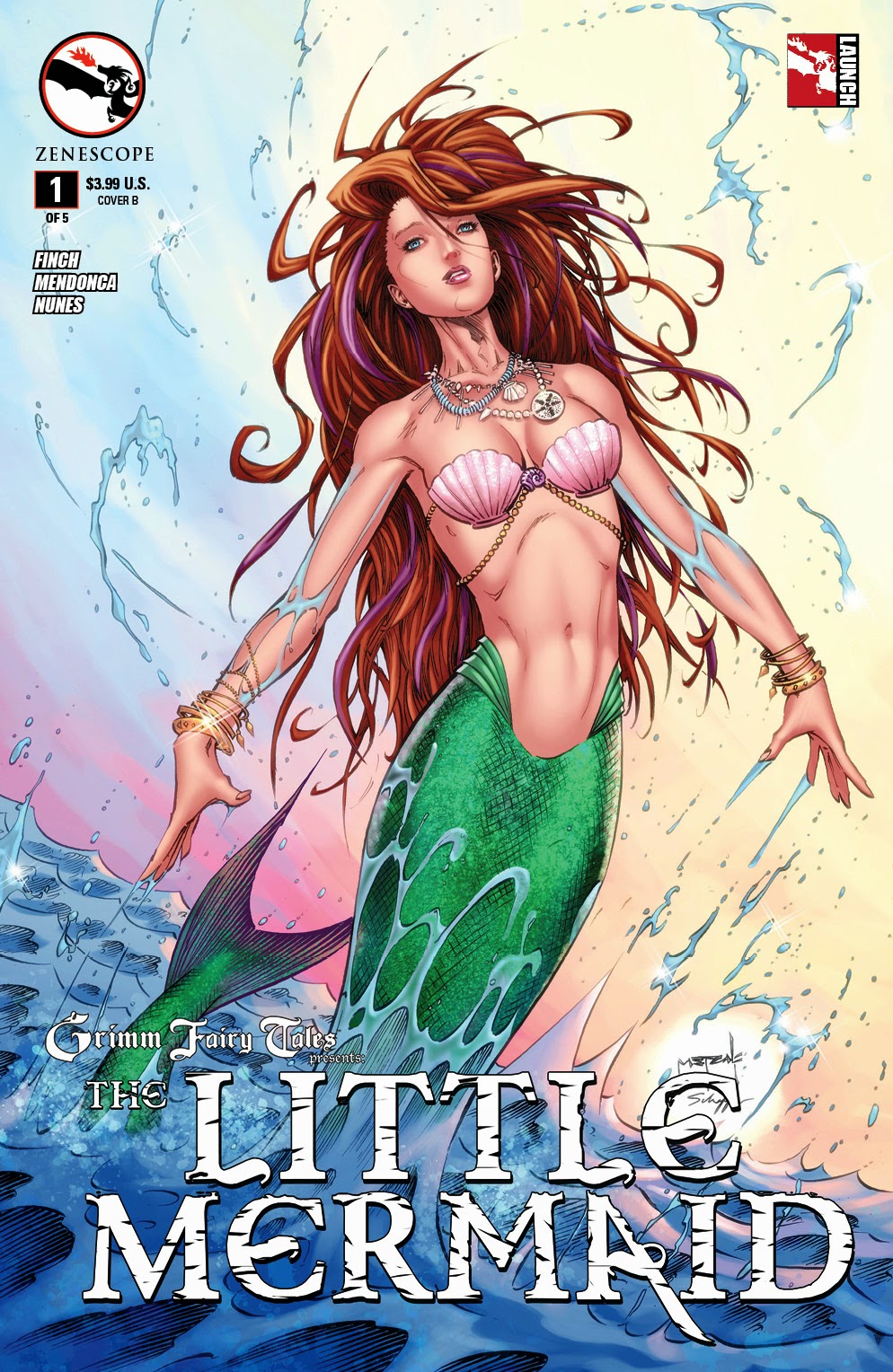 In this Comic Book Wednesday I’m taking a look at The Little Mermaid #1. It’s available today at your Local Comic Book Shop, so ask for it now!

First, some background – I’m not sure that I’ve ever mentioned this publicly, but The Little Mermaid is one of my favorite animated films from Disney. The only thing this has to do with the new Zenescope comic is that it increased my interest in reading it and probably my desire to actually publish a review of it. Otherwise the two things are unrelated.

As you may or may not know, the Disney version is not the original. Hans Christian Andersen wrote the original, which is very different from the Disney version and features the titular character enduring terrible suffering and humiliation before finally taking her own life.
Needless to say, there were no singing crabs. It’s pretty fucking depressing.

Anyway, because of the Disney version I’m always curious about different interpretations. I wasn’t expecting anything quite as grim as Andersen’s horrifying tale from Zenescope, but I knew it was likely to have a different take and tone than Disney’s.

Zenescope has previously established the character of their own Little Mermaid in Myths & Legends Volume 2. If you haven’t read that, you and I are in the same boat (so to speak), so I’ll be providing a “New Reader Perspective”.

Do you know the real story of the Little Mermaid?
When a young mermaid finds herself captured, her world will turn upside
down and she will need to find the courage to confront her fears or
perish at the hands of evil.

That’s not really saying much, but never fear – what you need to know is explained in the ensuing narrative.

I’m going to keep it light on story details here because part of the fun I had reading this comic was in discovering each of the plot points. What I will say is that this Little Mermaid – Erica – is a very different Little Mermaid from Disney’s or Andersen’s, though she has qualities of both versions. We only get a few character beats in this issue – significant ones – but I’m already hooked into watching Zenescope’s mermaid develop.

There’s more than just Erica here, though. Issue #1 gives us a look at the world she inhabits and the people she’ll be dealing with, as well as a mysterious organization that’s up to no good.

Side Note: Mysterious organizations are never up to any good.

The story jumps through times and places and I’ll have to admit that it took me reading the issue a couple of times to grasp who was doing what when and where. It’s not bad storytelling by any stretch – there are just a lot of elements to bring together here and no way to do it concisely. I appreciate that we’re getting to the point rather than drawing the various components of Erica’s origin out over an entire arc. That’s not to say I don’t think we’ll see more of her (and the other characters’) past, but we needed bullet points here to get the story rolling. By the end of the second time through I felt fully caught up and ready to read more, is the point.

The art is fantastic. It’s certainly what I have come to think of as the “Zenescope Style” – competent and clear, with very strong storytelling. While I wouldn’t be opposed to some experimentation with style in the future, I really appreciate that all of the titles from Zenescope feel like they’re in the same world. I think it’s good for smaller publishers to have a strong, recognizable identity. 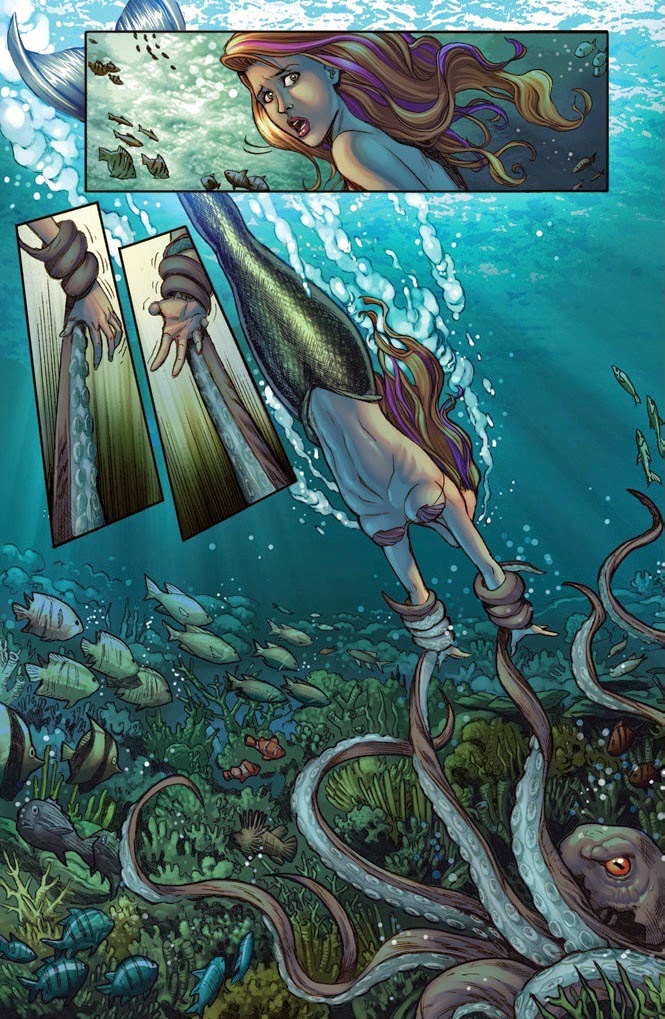 The underwater scenes in the book are beautiful. Try to imagine drawing the ocean. How do you do that? Sure – there are fish and there’s coral and seaweed and anemones. But how does all that stuff interact? And how do you make it seem alive while at the same time creating an environment for comic book characters to inhabit?

It’s not just a matter of coloring the space around the character blue. There’s motion everywhere underwater. It has to feel organic, and in The Little Mermaid it does. It’s a combination of efforts from the artists, and it looks wonderful.

The portions of the story that take place on dry land also look good and have tons of detail and background, but the images in the depths are so nice I wanted more.

As far as the characters go, the artist – Miguel Mendonca – is very good with showing emotions through facial expressions and body language. Each character is very distinctive and has their own proportions and features. There aren’t any “blank slate” characters, even among the background cast. Action scenes are dynamic and engaging and it’s very easy to tell what’s going on in each panel, as well as to follow the sequence of panels.
Okay, I’m gonna give you guys this one since Zenescope has released art depicting her and it’s no surprise that she shows up in the comic. Phantomaniacs – check out this Sea Witch!: 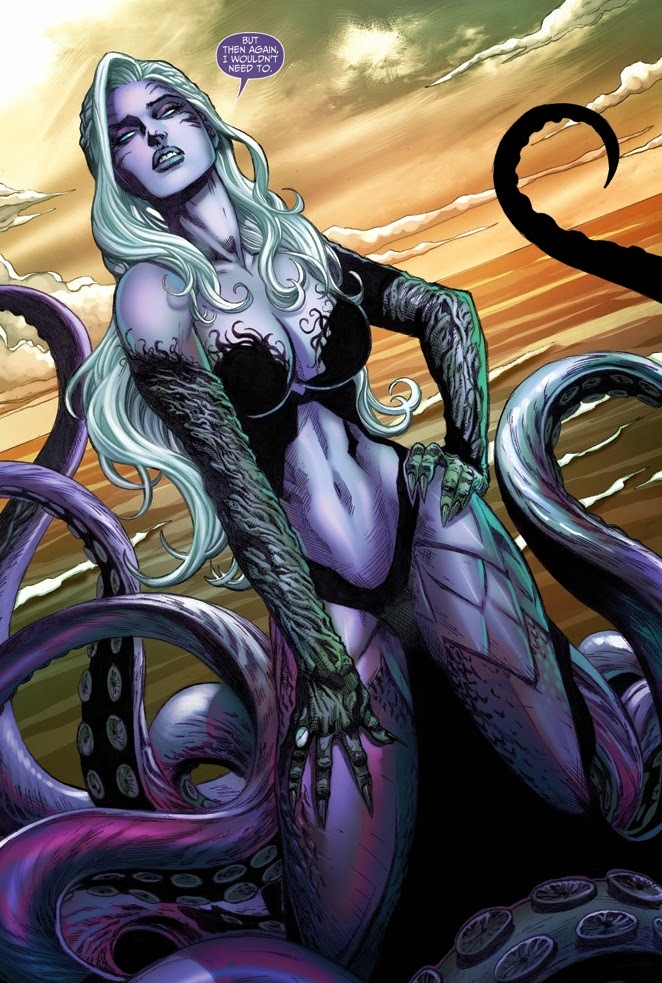 That’s just an awesome design. I'm sure there are those that would complain about her not being a "full-figured woman", but let's try to remember that this is unrelated to the Disney version and also that villification of large people is an ugly thing. Fit, sexy people can be villains, too.

Throughout the panels she is depicted as having a writhing, amorphous form and it makes for a very sinister and imposing villain. I don’t want to spoil who she’s talking to, but it’s an intense and ugly conversation. Between the dialogue and the art, it’s clear that the Sea Witch is savoring every moment of torture she can inflict.

I enjoyed reading this book and looking at the art and, once again, I find myself anticipating the next issue.
Posted by Phantom Troublemaker at 4:14:00 PM