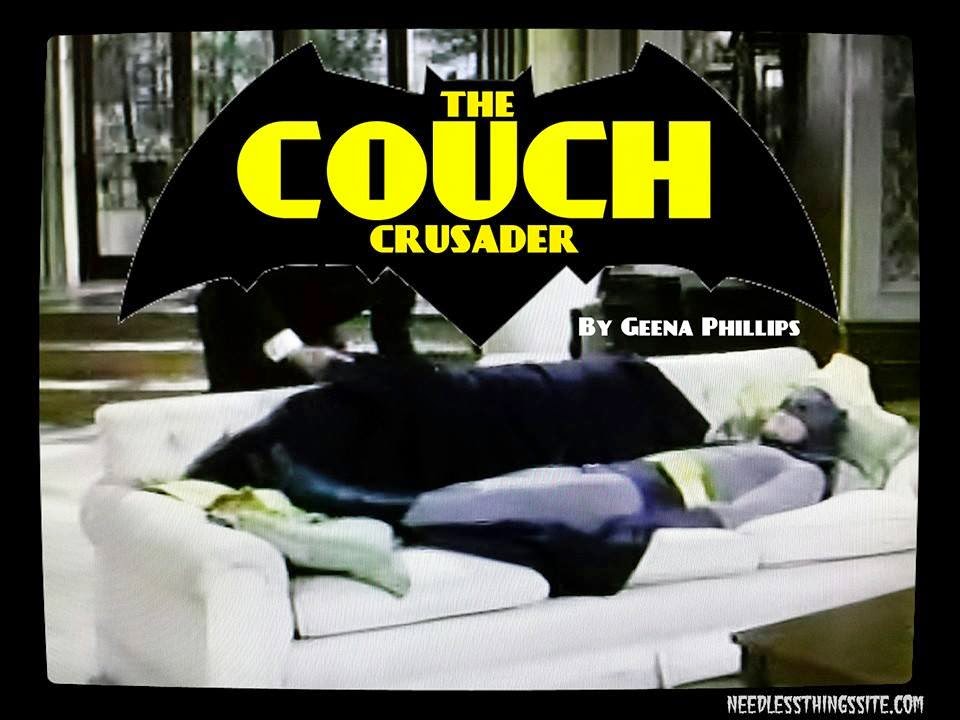 Really, show? We get two whole stories each with the Riddler and the Joker before we even get one with Catwoman?

Just had to get that out of my system; now, back to our program, already in progress. 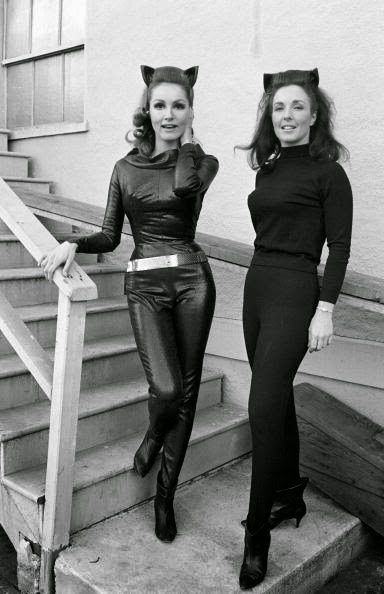 "It is midnight, and Gotham City sleeps..." as evidenced by the clear blue sky in the background of the establishing shot, apparently. Under "cover" of "darkness," the theft of a priceless statue happens at the museum (where's Ben Stiller when you need him?)

The next day, at police headquarters, Commissioner Gordon and Chief O'Hara's musings about the crime are interrupted by Gordon's stalwart receptionist, Bonnie:

"Oddest-looking man left this for you, sir."

"Odd-looking? In what way?"

Wait. I may be getting this episode mixed up with Fargo. My bad.

Ever the keen law-enforcement mind, Commissioner Gordon surmises from the package they were sent (which contains A KITTEN) that the felonious feline responsible for the burglary must be none other than Catwoman.

"This calls for drastic measures," gravely intones the commish. If, by "drastic," you mean "calling Batman, the way you do every single episode," then YES.

Wait a second. Are Bruce and Dick playing three-dimensional chess? Mr. Spock is NOT AMUSED.
Goddammit! I want those Blu-Rays, and I want them right now, so I can see clearly the logo on Bruce's school blazer!

It is a testament to the magic of this series that even the most boring bowls of Exposition Soup are served up with the same pitch-perfect arch sincerity as the show's wilder moments. Anyway, after I woke up, B&R were about to head off to prevent the theft of yet another cat statue. Batman's response to Chief O'Hara's offer of police help is rather telling (not to mention a little passive-aggressive): "No thank you, Chief O'Hara. I certainly don't mean to cast any aspersions on the Police Department, but this time I think Robin and I better go it alone."

TRANSLATION: No no no, it's fine; turns out, I actually ENJOY wearing my underpants on the outside and doing your job for you.

Thank you for the reminder about always fastening my seatbelt, Batman. I WAS SUCH A FOOL.
"Gato & Chat Fur Co.," Catwoman? Really?!? Why not just make the door shaped like a giant cat's head? That would be less conspicuous. Inside, her henchmen (dressed in COMPLETELY ADORABLE outfits) are musing over their boss' motives. And then, finally, SHE appears: Julie Newmar as Catwoman. You may have to excuse me for just a few minutes.

So, Batman's plan to foil Catwoman's upcoming theft is to douse the statue she's after with radioactive material, thus making it easier to track. This sounds like a relentlessly brilliant plan, and could in no way result in Gotham City becoming a Superfund site.

Later that night at the Exposition Center, shit gets real. Robin is taken out by an attacking housecat (totally not making that up, you guys); while Batman attends to his sidekick, Catwoman and her adorable gang get away.

Back at their hideout, Catwoman prepares her henchmen for the dynamic duo's imminent arrival.
"Felix [GET IT?]; you can brush my pussy willows before you leave." Yup; TOTALLY a show for kids.

Psych! Turns out the statute thefts were but a ruse to lure our heroes into a deathtrap. And an ever advancing wall of spikes, at that. C'est Magnifique!

Ha! Double psych! The spikes were actually made of rubber. I like the cut of your jib, Catwoman.
Dang it. The fake bomb that follows is kind of a letdown. Stop toying with my emotions, Julie Newmar!

As a ferocious, Batman-eating tiger closes in for the kill, we are reminded to tune in tomorrow night, "Same Cat Time, Same Cat Channel." Cute. 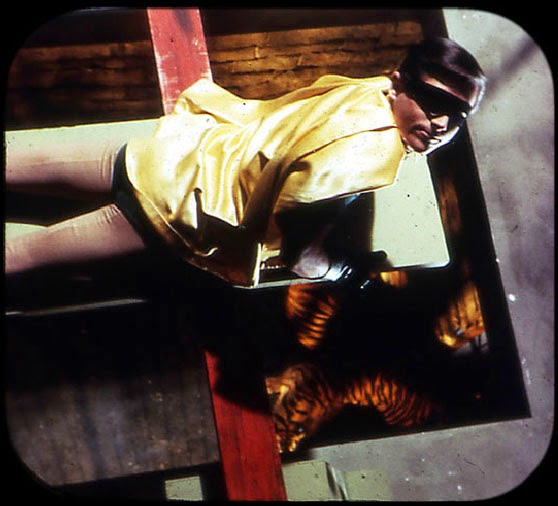 Dude! Catwoman's been starving her tiger, just so it would have a hearty appetite for Batman? Wanting to murderate Batman is one thing, but neglecting your pets is just flat-out inexcusable.
I need some help here. "I'm off to pluck Robin's feathers" is totally a sex thing, right?

So Batman escapes Catwoman's death trap by tormenting the tiger with loud high-frequency sound. I'm really starting to feel for this animal; he's clearly just a pawn in these two freaks' kinky role-playing. To make sure he doesn't get lost in Catwoman's labyrinthine hideout, the Caped Crusader places adorable glitter bat stickers on the walls to mark where he's been (SO Lisa Frank).

Robin awakes from his Catwoman-induced slumber to find himself in the midst of a horrifying deathtrap. "Catwoman, you are not a nice person!" (he is SO TOTALLY INTO HER, you guys) It'll never work out, Robin; she keeps WAY too many hungry tigers around to have time for a relationship.

Luckily, Batman arrives to save the day; and, after a particularly painful-looking series of fisticuffs, one of Catwoman's henchmen is rounded up.

"Oh, Boy Wonder. I just returned from a late session at the mayor's office; he wants action, fast." Now, I know what Commissioner Gordon is actually talking to Robin about on the phone; but, dammit, it's way funnier out of context. Note that at no point in this telephone conversation is it mentioned that maybe Gotham Animal Control should swing by Catwoman's hideout, to deal with three starving tigers. Just sayin’, is all.

Silly Catwoman. Mining the road leading to where you're at isn't gonna stop the Bright Knight. And gassing your sole remaining henchman so you can keep all the loot for yourself MAY be strategically unwise in the long run.

Daaaamn. Another Guest Villain meets with an apparent grisly demise.

Luckily, Bruce manages to hold in his grief long enough to change into a really snappy ascot for the closing scene (which is some nonsense involving Aunt Harriet and a thieving housecat).