"Another glorious, sun-drenched day in Gotham City. A fitting day for nuptials, exhibits, and grand theft." Despite what you might think, NOT the slogan for the Miami Board of Trade and Tourism.

Jeezum crow. I WAS going to talk about the tendency among Gotham city's criminals to engage in the counter-intuitive step of publicly announcing their crimes, but I've been successfully sidetracked by this princess' "foreign accent," which is a crime against elocution that simply cannot go unanswered. Bitch, I hope your crown gets "shtolen"...
Looks like I'm in luck! The princess' escort turns out to be the infamous False Face, who evaded detection in his clever disguise of a fake plastic van dyke on top of his normal fake plastic mask (did I mention that two of Gotham's top cops, including Chief O'Hara, are in the room? Cuz that seems kind of relevant to mention at this juncture). To make the Chief's humiliation all the more complete, False Face and his terrible-actress confederate make their getaway by stealing a GCPD van (Harvey Bullock would never put up with this tomfoolery; on Gotham, the next scene would've been Bullock at the ER, having pieces of plastic mask removed from his fist). 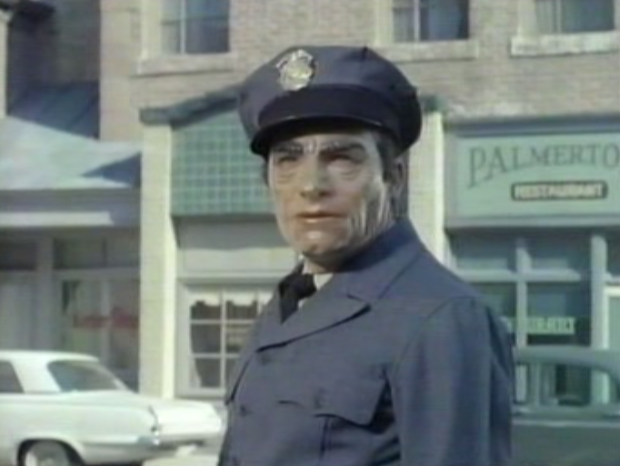 "A ramble in the woods?" That's your excuse for leaving the house this time, Bruce? Remember that Brokebackian tipping-point I mentioned a few episodes back? I think we've clearly crossed that Rubicon; there's no conceivable way that Aunt Harriet DOESN'T think that Bruce and Dick are getting it on.

I love the messenger who shows up at police headquarters: "Are you Batman, sonny?"
"I am."

"I was just wondering, because when I was a lad, Batman only showed up at night." (okay; it's possible I made that last bit up)

In the process of parsing out his latest clue, B&R remind us that False Face "always says the opposite of what he means." So, False Face is actually Bizarro? That am perfectly straightforward writing, and not stupid gimmick at all.

Batman removes the hat from the elderly messenger, revealing False Face's accomplice, the sexy Blaze (seriously; a half-second ago, she was a visibly grizzled old man). To Blaze's credit, she immediately makes a daring, kick-ass escape from police headquarters (with the help of a well-placed slide whistle). AND the airbag she makes a safe landing on after jumping out of a second-story window has the giant initials "F. F." emblazoned on it. That is a sick burn, False Face; advertising your forthcoming crime spree is probably not gonna work out in the long term, but you clearly win on style points.

Back at False Face's lair, we are treated to the revelation that Blaze is not actually a blonde. MASTER OF DISGUISE! I like that False Face has no illusions regarding the insincerity of his henchmen's approbation; is this a level of insight attributable to his own false nature? Hmmmm...

Note to self: Batman dialing a full seven-digit number on a rotary phone needs to be made into an animated .gif, STAT.

Upon receiving the news that the Dynamic Duo will do everything in their power to prevent his armored car from being stolen, the president of the armored car company proclaims, "Bless you, Batman. Every law-abiding citizen of Gotham City goes with you today in spirit."

"And if it were possible, in body," pledges his star-struck secretary. Now, looking past the UNBELIEVABLE SEXISM of that bit of writing, I would simply admonish this young lady to keep it in her pants when she's on the job.

And how do our heroes deduce that False Face is disguised as one of the armored car drivers? Simple: He parked in front of a fire hydrant (the fiend!). In some ways, that little bit of business encapsulates perfectly the ethos of this show; and helps explain why I love it so, more than 40 years later.

I believe this is the first outdoor fight scene of the series. (An aside: In case I hadn't mentioned it, one of False Face's henchmen is a little person; kudos to the show for not using his stature as an excuse for a cheap gag) At its "conclusion" (the scene is kind of all over the place, honestly), False Face drugs and abducts Chief O'Hara, in full view of half a dozen other cops and (I think) Batman and Robin.

Can I just say that False Face's plan to disguise himself as Chief O'Hara is a TERRIBLE idea? The minute he displays, even accidentally, the slightest aptitude for being a cop, the jig's going to be up; they will totally know he's not the real deal.

Meanwhile, back at the Batcave, the Dynamic Duo, through use of the Batanalyst (which, despite its name, is NOT a psychiatric professional retained for the purpose of helping Bruce and Dick figure out why they insist on running around in broad daylight in their underpants), determine that False Face's plan is to counterfeit money (because he's a big fat faker; GET IT?).

Hey, Official Bank Note Printing Company? Nothing screams "nothin' to see here" like a sign that reads "Top Secret!" in big red letters. Blaze, of course, shows up at the bank-note paper warehouse (sporting FABULOUS purple hair; now do you see why I dye mine?) to overcome the hapless night-shift worker and haul away the goods. Aw, come on, Robin: Don't hang the little person up from a hook on the wall (my mother hung me from a hook once. ONCE.).

Blaze is now my spirit animal. The way she plays B&R during their interrogation of her is a thing of beauty. She successfully convinces them to take her along as they go to find False Face. Next thing you know, WHAM! It's the old "talk Batman into getting a candy bar for you out of the gimmicked-up vending machine" (apparently, Bats learned nothing from his last encounter with the Joker) trick.

Well, dang. As Batman and Robin are glued down to the train tracks to meet their end courtesy of hot locomotive action, Blaze expresses her regret that it's gone this way, and asks for Batman's forgiveness. >sigh< We could've been so happy together, Blaze; if only you hadn't lost your nerve. 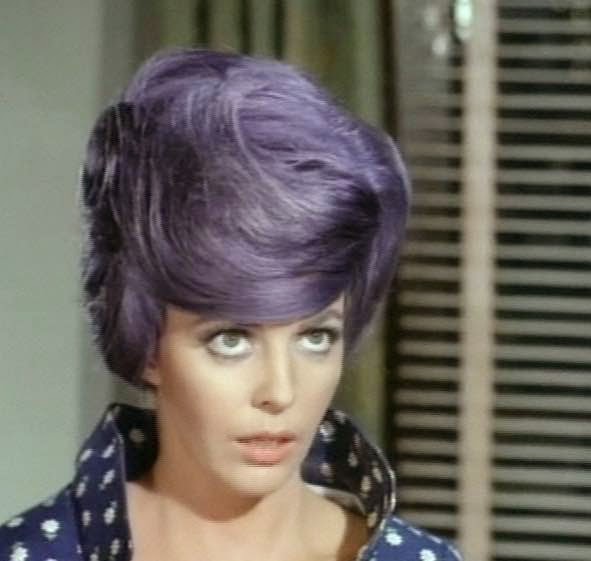 When last we left the Caped Crusaders, they were shrink-wrapped to a train track, and about to be plowed under by the 4:10 Penelope Pureheart Special. How'd they make their daring escape? Well, I just watched it, and I STILL have no fucking idea. Best to move on (but I will note, as with last episode, they apparently couldn't even afford stock footage of a subway train to insert here).

Meanwhile, False Face threatens Blaze for her supposed treachery, as he lounges about in a silk kimono and father Guido Sarducci mask (don't ask me to explain, folks; I am but a humble chronicler of events).

Happily, Chief O'Hara has escaped from where False Face failed to leave him for dead.

"That's why I'm concerned about Batman and Robin."

No, Commish, the OTHER Batman and Robin. >facepalm< Sigh. I am THIS close to reaching the conclusion that Commissioner Gordon has EXACTLY the police force he deserves.

B&R are in the Batcave, watching TV (helpfully labeled "Television"; I'm beginning to think they have an ongoing gas leak, what with all the labels on everything). Later, the Bright Knight grills the president of the local NPR station over the mysterious broadcast that saved his and Robin's lives. "I don't think we should take religion lightly," he proclaims. I'm with you on that, Bats: At least half the nuts you've gotten locked up in Gotham State Penitentiary claim that "God made me do it." But tackling the root causes of crime is anathema to everything Batman stands for, so I'll stop digressing.

After some stunning, sparkling repartee on how radio advertising is paid for (False Face's gal Blaze paid for the radio announcement with a check? Who does she think she is, Jerry Springer?), The Dynamic Duo head back to police headquarters. There, they piece together False Face's plan: to replace the money in Gotham National Bank's vault with counterfeit bills, thus rendering account holders' funds worthless (of course, this is before the US dropped the Silver Standard, so I GUESS this was kind of a legit concern...?).

Wow, if you could actually cut through the bars on a bank vault with what is basically a Dremel tool, I would rob banks ALL THE TIME. Just sayin'. After that, FF's wily criminal gang manage to squeeze through the holes in the bars, and cut the cord to the electric-eye sensor (a cord that is easily reachable from outside the bars, but that's none of my business tho >sips tea<). Important note at this juncture: this part of the daring bank heist takes four guys about as long as it would take two burglars in the real world to completely clean out a three-story townhouse. Time is money, gentlemen. I also have to question the logic of using explosives to enter a bank vault, when your goal is to surreptitiously replace the money. But whatevs.

"We're rich, False Face; rich beyond the dreams of avarice!" Well, I for one am glad to see that Gotham City's criminal class are taking time to avail themselves of the continuing-education opportunities afforded by Gotham Community College. Good on them!

Turns out it was a carefully-laid trap by the Dynamic Duo; fisticuffs ensue, joined by the finest men of the GCPD (Chief O'Hara's efforts to subdue a little person are PRICELESS). In the confusing melee, False Face makes his escape, all the while plotting to lead Batman and Robin into a trap (Spoiler Alert: This "trap" is probably going to suck).

I hate being right all the time. That trap WAS pretty goddamned worthless. Seriously; the only reason it takes Batman fifteen seconds to get out of it is an appalling lack of shutting up while doing it.

Wait a minute, False Face. You mean to tell me that your early 60s Dodge cargo van had rocket launchers this whole time? Seems to me you could have solved this whole B&R problem WAY earlier; talk about burying the lede...

Psych! Turns out False Face RPG'd a fake Batmobile (inflatable, even). False Face tries to make a getaway on motorcycle; but, thanks to the fleet-footed work of (seriously middle-aged) stuntmen, Batman and Robin soon bring him in, despite a bewildering(ly stupid) variety of desperate disguise attempts.

The final scene, at Stately Wayne Manor, happens an indeterminate period of time after the rest of the episode (a fact the show doesn't bother mentioning), and features Aunt Harriet introducing the newly released and reformed Blaze to Bruce and Dick. Alas, the stem really is off the rose for Blaze and I.

Better to have loved and lost, I suppose.