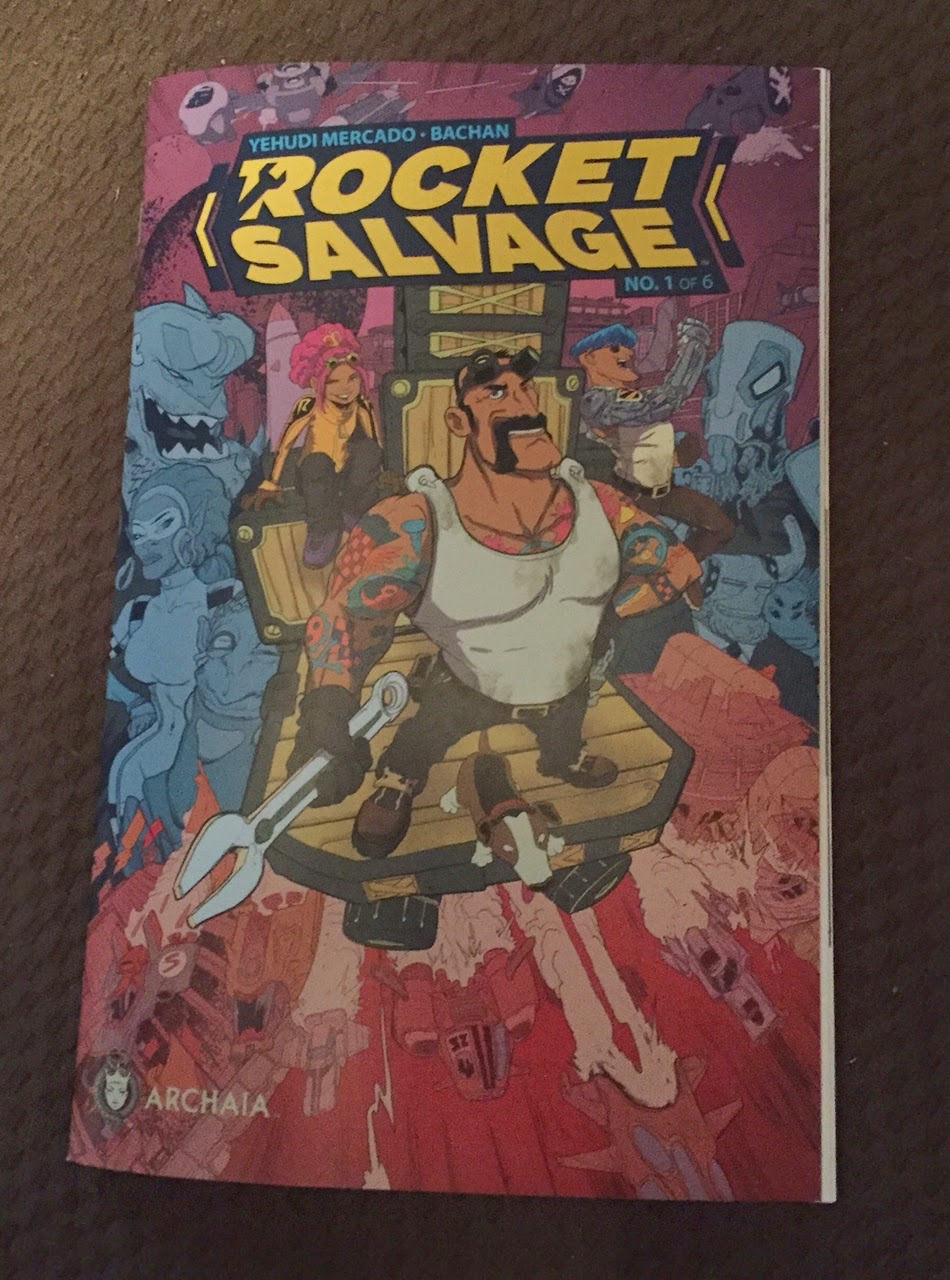 I don't make it to the comic shop very often these days - about once a month. And even when I do go my budget is about twenty bucks. I don't have set titles that I just have to buy anymore so I try to find number ones, trade paperbacks, or ones with self contained story lines. As I was browsing the new release titles at my local comic book shop, I came across Rocket Salvage #1 of 6 published by Archaia. The first thing that caught my eye about this title was the gorgeous artwork and use of bright colors that popped off the page. I took a chance and picked up this book without knowing a single thing about it.


Rocket Salvage is definitely not your average comic book. It's not a superhero book and I find it hard to categorize it as anything but that is not a bad thing here. It's a sci-fi/political/space race with aliens kind of book. See - I told you it was difficult to categorize. But don't let that scare you off by any means.

The story follows Primo Rocket who is a former race car driver, now turned garbage man. At first we see a glimpse of Primo in his heyday of racing then flash forward to him fifteen years later with his daughter Zeta and “son” Beta. Oh, and dog Rocco. We first see him in all his glory but then see a man that has fallen a bit from his prime. I can only imagine that we might get to see him be the hero in some way. His fall from grace isn't fully explained in this book so I'm hoping the back story to that comes sooner rather than later.

One thing that I think stands out is his relationship with his daughter Zeta. It feels like a real father/daughter relationship. With the father looking out for the teenage daughter's best interest while the daughter wants to make her own choices. There is also an added intrigue of Zeta that I don't want to spoil but I am looking forward to watching it unfold as the story continues.

This book does a good job setting up the story to this brand new universe. It introduces characters superbly making them feel like we have known them much longer than we have. It seems that the main focus of this story is going to be “a weapon” that got quite a bit of mention and everyone seems to be on the hunt for. There also seems to be a war going on between robots and aliens that will have an effect on their world.

We get a taste of a little bit of everything that this book is going to have to offer. There are alien gangsters, plot twists, humor, and even racing! Now, I kind of skimmed over the humor a bit there but make no mistake about it, this is a very witty written book. At times the humor is fast and sarcastic but that is right up my alley. Writer Yehudi Mercado also does a great job of constructing characters that we care about right from the get go. Which can be an extremely hard task for some writers.

Illustrated brilliantly by Bachan and colored by Jeremy Lawson, this book visually stands out from anything that is currently on the shelf in my opinion. It feels like a Saturday morning cartoon which is nothing but a good thing!

The book is priced at 3.99. Unfortunately, this seems to be the going rate for most comics these days but being an independent book not featuring a bat or a spider that price tag might run people off. But I promise if you want something different from anything in your “to read list” then this is it! As a bonus this book does not have a single ad anywhere in it except for the last three pages which is totally acceptable because its for the publishers other books. And an internship ad for Boom Studios so not sure if there is a connection there.

For this review I read the book twice and enjoyed it even more than I did the first time. In fact I am looking forward to the next issue which I typically don't do. What usually happens is I forget about the comic and never continue reading it. Well, I'm not gonna let that happen with this book. With such great characters, an intriguing plot, and something that feels completely original, it is a very captivating book. The first issue was released on December 17, 2014 with issue two hitting the shelves on January 21, 2015.