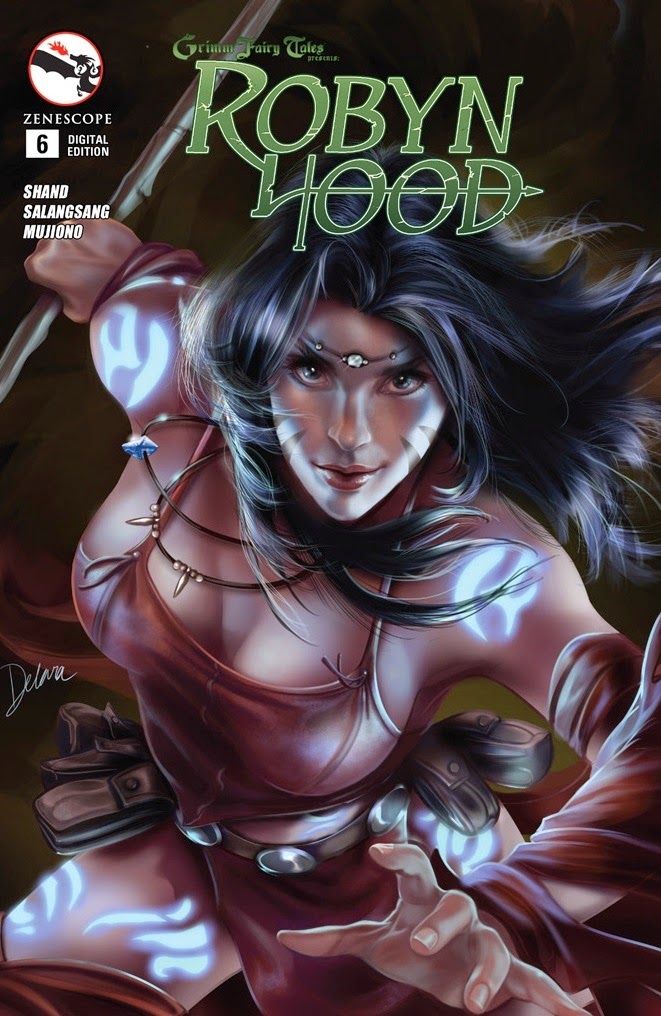 In this Comic Book Wednesday I’m taking a look at Robyn Hood #6. It will be available on January 28th at your Local Comic Book Shop, so ask for it now!

This sixth issue of the Robyn Hood ongoing series is pitched as a jumping-on point, something Zenescope (wisely) seems to offer with frequency. This is the first issue I’ve read of this title, so I’ll be judging it on that basis and checking out the previous titles if I dig it.
The story thus far is that Robyn Locksley was taken from our world to the city of Nottingham in the world of Myst (one of the kingdoms that make up the Grimm Fairy Tales universe). Robyn saved the city and was returned to New York, which is interesting because I would have expected the character to remain in Nottingham, doing hero stuff.
While in Myst, Robyn met a witch named Marian and brought her back to New York, which is where this issue picks up…

Once again, the art is solid and the artist is a good storyteller. The only time I was confused by the panel sequence was when I got to a double page spread in the middle of the book. Those don’t read so well in PDF form. Heh. So aside from format issues, the art flowed smoothly and was easy to follow.

The characters look good and distinct and their faces are very expressive. Robyn has anger issues and you can see it in her face in many of the panels, even without the dialogue. Marian is unsure and uncertain in this new world, and it shows in her face and posture. Salangsang has a talent for making drawings feel human. 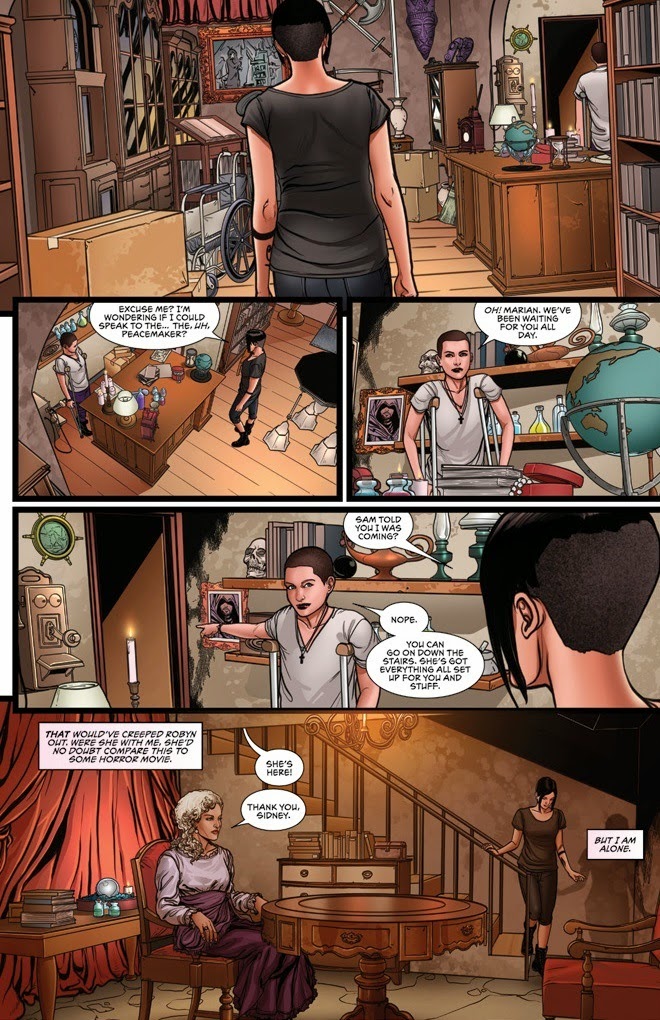 Also of importance to me is the fact that almost every panel has interesting, detailed backgrounds that place the action in a definable environment. Rare is the panel with a blank, monochromatic background. And when it does happen, it’s always for emphasis. A lot of work is going into illustrating this book.

The color is very nice, as well. The shading is beautifully done and – once again – the backgrounds are fully rendered. There aren’t any blobby parts where large portions are just the same color. If there are times in a panel, they are distinct and individually detailed.

Robyn Hood continues what seems to be a common theme in Grimm Fairy Tales books – the fantastic in the context of the real world. I realize this is something that has been done countless times, but Zenescope has its own flavor of this theme. I can’t quite pin down what makes it so unique, but there’s just a feel to these books. The characters are flawed and relatable, despite being witches or gifted beings or gods or whatever.
The concept is laid out in a fairly plain way in this book. Marian is a lesbian witch that left Myst because Myst is not the most progressive of worlds, if you catch my drift. Earth is better, but not by a whole lot. Marian’s magic is fading and her dilemma is that she is not defined by her sexuality or her magic, but they are definitely parts of her being. And she’s losing one of them. Buffy has addressed similar issues (yes, I know “lesbian witch” sounds awfully derivative), but Marian feels like a very different character from Willow. And this is certainly a different world from Sunnydale.

I’m not familiar with the details of what happened in Myst and I don’t know the specifics of the Earth that Robyn and Marian inhabit (though it seems to be pretty much our Earth) or if it’s the same Earth where the other Grimm tales are taking place. But I do know that I fucking love this page: 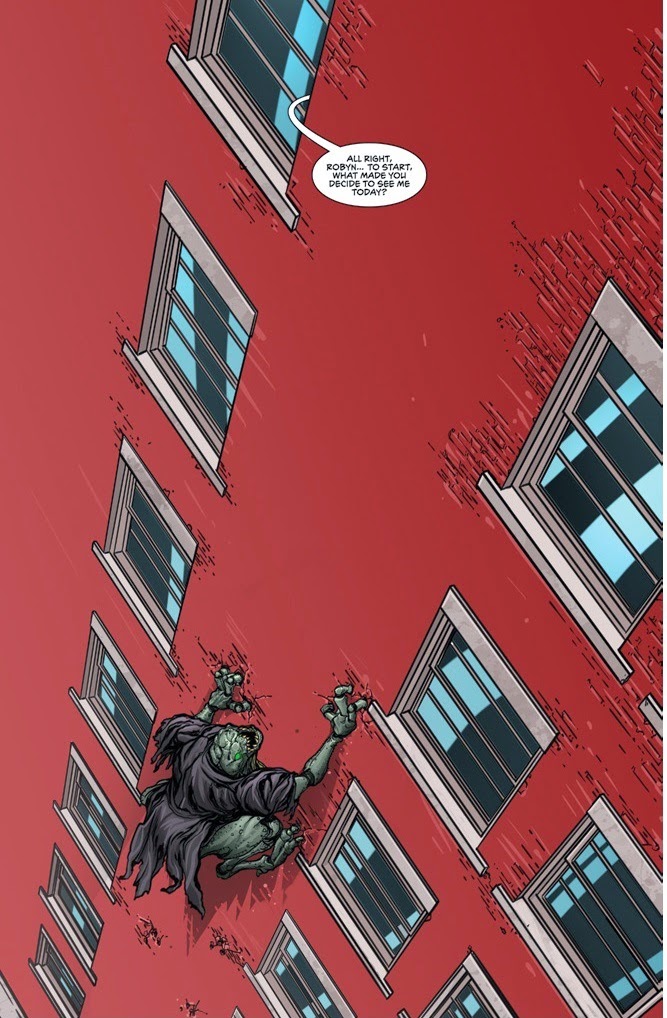 That’s an awesome monster that first shows up stalking the heroines in the streets while wearing a hoodie. I don’t know what it is or where it came from, but I have all of the information I need without a word of exposition: it’s sentient enough to wear a disguise, it’s powerful enough to scale the side of a brick building, it’s evil enough to be ready to murder Robyn and her poor, poor psychiatrist.

Unfortunately for the monster, Robyn has the most awesome go-to move in the history of comic books. Right out of the gate she straight-up head butts the monster in the chest, which causes its chest to EXPLODE: 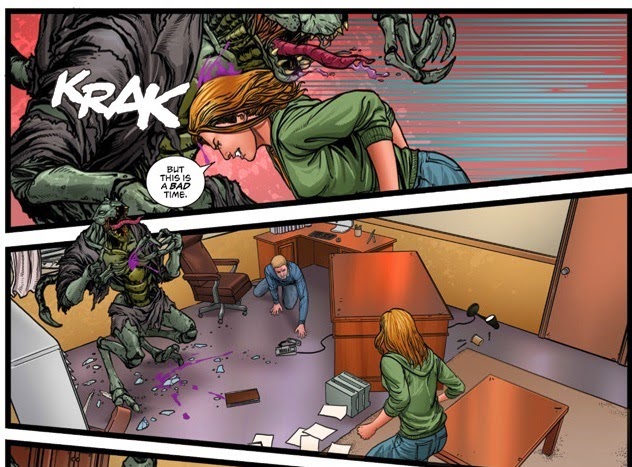 Now, this is obviously a spoiler and I hate doing this sort of thing, but there’s no way I couldn’t talk about this panel. It’s one of the best panels I have ever seen in a comic book because it defied everything I expected from Robyn Hood. And the monster maiming escalates from there. Not only is Robyn powerful, she’s fucking nuts. This is demonstrated by her handily dispatching a giant, terrifying monster during a visit to her therapist.

Opening with a head butt, man. Not even JYD did that (may he rest in peace).

I’ll admit that the opening of this book didn’t hook me like some of the other Zenescope stuff. It was a little too dramatic. But then that head butt happened and that was just what I needed. And it wasn’t just the head butt. That was just the point where everything seemed to sort of pick up and come together. I think if I’d had the five issues leading up to this under my belt, the first nineteen pages of this issue might have gone a little more smoothly.

As things stand, this issue closes with a creepy (presumably) secret society, a captive (allegedly) insane sexy witch, and a (apparently) dedicated therapist. Who I definitely do not trust.

Robyn Hood #6 got me interested and excited enough to look forward to seeing issue #7 in my inbox. Issue six comes out on January 28th, so keep an eye out.