"Woodrow Roosevelt High School"? Is it really, tho? 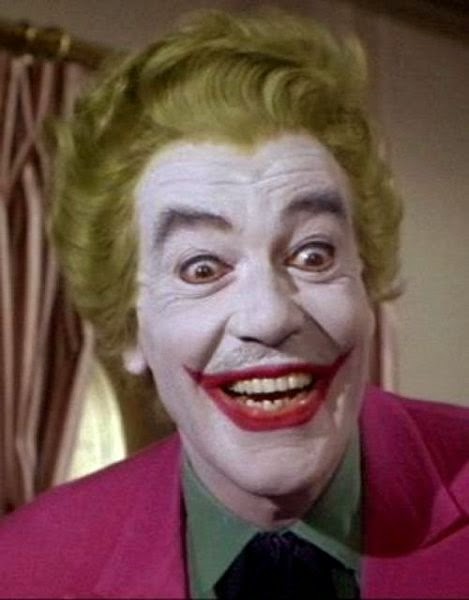 As our story begins, the white cheerleading squad, the white basketball team, and the incredibly white Dick Grayson are all engaging in various forms of activity in the school gymnasium (it bears mentioning at this juncture that I feel no guilt over being aroused by the sight of these cheerleaders, because there's no chance they're not WAY legal). The cheerleaders decide to take a break, and enjoy some refreshing milk from the milk vending machine conveniently located in the gym; when they insert their dimes, instead of wholesome refreshing dairy goodness, the girls instead receive a stack of silver dollars (oooooh! Does your nefariousness know no bounds, Joker?).

Naturally, this is a matter for the police, I guess...? (just go with it) On the other hand, kudos to Commissioner Gordon for immediately recognizing this as the handiwork of the Joker; if I didn't already know the title of this installment, I would've totally thought it was the beginning of the Two-Face episode that we never got on this show.

Interesting. As Commissioner Gordon rises to call Batman (as one does), I see something I never noticed before: the commish has a pair of handcuffs on his belt (given what a committed desk-jockey Gordon is, there's no way this is not a sex thing).

Meanwhile, at Stately Wayne Manor, Bruce Wayne is rebuffing the biannual exhortations from Gotham's business elite to run for mayor ("Oh, you don't want ME in charge of this town, buck-o. My first campaign promise would be Free Galoshes For Everyone. Why? Because the streets would run red with the blood of the guilty." j/k, you guys! His actual response was some slice of milquetoast about wanting to focus on the Wayne Foundation's charitable works. But whatevs).

"Someone has struck at Woodrow Roosevelt High." I really hope one of those books on that wall behind you is a dictionary, Commissioner Gordon; because I'm not sure you quite get what the word "struck" means (I have never in my life received silver dollars in a manner that made me feel particularly assaulted).

Batman races to police headquarters, where he reads the dossier the crack typing pool of the GCPD (hey, SOMEbody in that department has to not be an incompetent boob; it's just the law of averages) has assembled: "Joker, released from jail one week ago,…" Yeah, I think I found your problem, Gotham City. I'm no advocate of mandatory minimum sentencing, but as a general statement of philosophy, I would say that if you've got the Joker in custody, your best bet is probably to KEEP HIM THERE.

After a phone conversation with the wormiest high school principal in the history of film or television, the Caped Crusader speeds toward Woodrow Roosevelt High. Meanwhile, student body president Dick Grayson is holding an impromptu meeting with his fellow student leaders; it is here that I learned I will never ever again make fun of Burt Ward's performance on Batman: Compared to his peers in the scene, he's clearly the Dustin Hoffman of this show.

Wait… Batman's parking outside of a designated, marked parking space? What kind of example is he setting for the kids? They're already pretty mixed-up in the head, what with the Joker's gimmick vending machines dispensing all-but-free money ("what's the point of studying if we can just get free stuff in life?").

So, by this time, you may have noticed only oblique references to the Joker; I haven't talked about him directly at all. Well, that's only because HE HASN'T SHOWN UP YET, almost halfway into the episode.

But I digress. "Stay back, kids. Robin's not here right now; and if any of you touch my car, you won't be either."

"Meanwhile, at a fashionable little bistro…" a jukebox rigged up with a shotgun is holding the customers at bay while the Joker's henchmen rob the place. Marry me, Joker. I can't tell you how many times I've been in line behind someone at a jukebox, seeing the selections they're making, and wishing I had a shotgun ("I'll 'Achy Breaky' YOUR heart, buddy!").

Batman gives the high school student council a quick slideshow about the malefactor who's been altering their vending machines, showing the Joker's various clever disguises (NOTE: All the "disguises" shown still involve him being a guy with chalk-white skin and green hair, so be on the lookout). Then, from behind the projection screen Batman JUST SET UP, emerges the Joker (seriously; the Joker should totally try to get on Penn & Teller: Fool Us, because that's a pretty goddamn good trick)!

Whoa! So, in Gotham City, the penalty for "Loitering on school property" is a $5000 fine, and five years in jail? Sheesh, with a police state like that, it's no wonder the criminals in this town are all batshit crazy (pun COMPLETELY intended). I love how the Joker jailhouse-lawyers his way out of getting arrested; stick it to The Man, Mister J.!

Back at the Joker's hideout, sweet Susie shows up, fresh from her cover as a high school student. At first I thought she was the Joker's girlfriend; but I'm happy to report she wants no part of his tomfoolery, or that of his stupidly-named gang, the Bad Pennies. All Susie cares about is getting paid; GOOD GIRL. Apparently, what she stole for the Joker is a crib sheet for upcoming exams...?
Dick, honey? You're wearing the Robin costume while doing homework. Again. I'm CERTAIN that we talked about this before, sweetie; we're really starting to worry about you.

So, it turns out that Susie is doing all the heavy lifting RE: the gimmicking of the high-school vending machines. AND, she leads Batman and Robin to the booby-trapped machine that captures them. Tell me again what she even needs the Joker for in all of this.

Okay, I guess a pair of electric chairs rigged to the outcome of a slot machine IS pretty Jokerific after all. And, I have to say, this episode's deathtrap being deliberately dependent on a game of chance is a VERY comic-book touch; I love it.

Batman Season 1, Episode 16 – “He Meets His Match, The Grisly Ghoul” 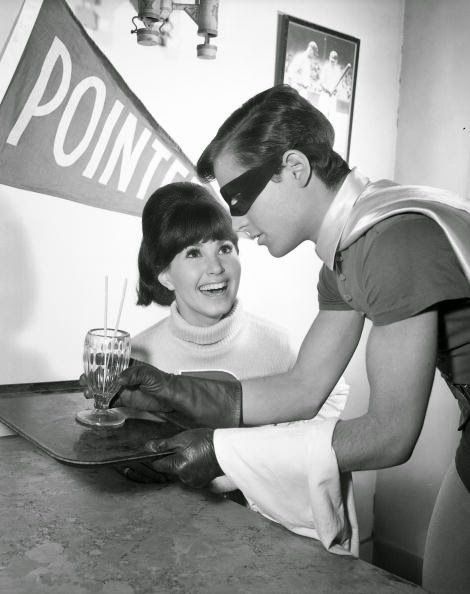 When last we left our heroes, they were poised to receive a 50,000-volt payout from an infernal slot machine. However will they survive? Oh… an impossibly well-timed citywide blackout? Sure, why not?

"A mobile slot-machine torture van? Why, to be in possession of such a vehicle violates seventeen separate statutes." Commissioner Gordon's extremely troubling pronunciation of the word "mobile" aside, it seems as though he could be focusing on other things; what with the power being out in his entire city and all.

Luckily, thanks to the SOVIET-ERA NUCLEAR POWER PLANT THAT POWERS THE BATCAVE, the blackout won't prevent the Bright Knight from analyzing his surreptitious recording of the Joker's voice disguise gloating. Thanks to the Batcave's super-scientific anti-crime whozawhatsis, B&R figure out that head cheerleader Susie is also a member of the Joker's gang.

This revelation gives rise to a plan: Dick Grayson (who Susie already knows, remember) is going to go undercover as a bad boy to try and join her in the Joker's gang. The execution of this plan is exactly as hilarious as you think it is; The handsome, clean-cut Burt Ward, swimming in a way-oversized leather biker jacket, wearing riding gloves and shiny, shiny dress shoes, is almost too endearing to make fun of. ALMOST. It is to the show's credit that the Joker's henchman isn't fooled by this ruse for an instant.

As the Dynamic Duo race toward the trap that the Bad Penny pointed Dick toward, the Joker and his goons ponder how to deal with the loose end that is Susie. The Clown Prince of Crime gives her a bottle of "Canadian perfume" called "One Endless Night," that she should only open after she's completed her final vending machine modification at the high school. The fact that Susie uncritically accepts this obviously-lethal gift kind of brings her stock down a few points in my eyes.

So, remember the shotgun-festooned jukebox from last episode? Yeah. Well, it appears the GCPD didn't haul it in for evidence, or even bother to unplug it. After protecting himself and the Boy Wonder from the shotgun blast with the Bat Shield (as opposed to, say, simply stepping outside the shotgun's 40° shooting radius), Batman takes out the jukebox with a tiny little grenade. Alas, I don't think he realizes that he's just hit upon the solution to most of his day-to-day problems (which, from the producers' standpoint, I kind of understand; if Bats did start cutting through Gordian knots with tiny little grenades, it would cut the repeat appearances of Guest Villains waaaay down).

Okay, Robin: When Batman tells you that the Joker's next likely step is to bump off Susie, don't you think exclaiming "Holy murder!" is a little on the nose?

Anyhoo, it looks as though the big showdown is going to happen during that night's basketball game between Woodrow Roosevelt High School and (not making this up) Disko Tech. Yeah, let that sink in a minute.

At last! Ten minutes before the end of the second episode, we finally find out what the Joker's really up to: Apparently he's going to rig a high school basketball game, and clean up by bidding on the outcome with bookie "Pete the Swede" (how do you even get a nickname like that?). His strategy for fixing the game is appropriately convoluted: Have the gimmicked-up milk machine dispense a sheet with the answers to the "Nationwide College Entrance Exam"; and then, snap a photograph of the Woodrow Roosevelt basketball team holding the sheet, sure to result in their being barred from play (leaving only the helpless scrub squad to face Disko Tech).

Well, that's a bummer. Turns out the climactic fight with the Joker and his gang is going to happen in an empty gymnasium; more's the pity.

In the final scene, Susie (whose life was saved by B&R, conveniently off-screen) is preparing to leave Stately Wayne Manor, where she's apparently been living for some undisclosed amount of time since the last scene, to begin her stay at the "Wayne Foundation for Delinquent Girls." Jesus. Bruce and Dick, under the same roof as a sexy teenage girl?