(is the alignment of the episode number with the title a coincidence? Hmmm...) 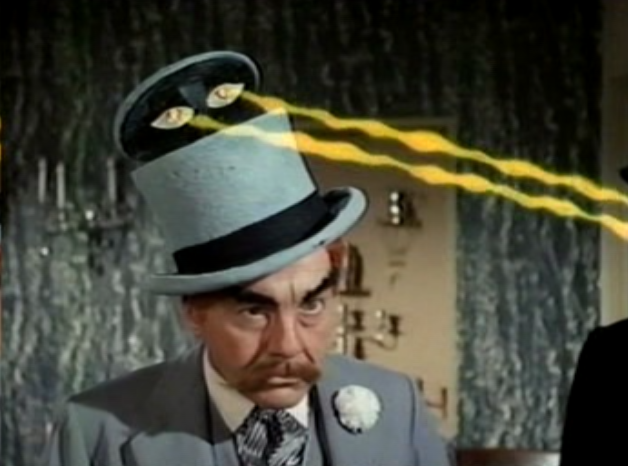 Criminy, do I love the Mad Hatter, especially in this incarnation. From the hypno pop-top gag on his top hat, to the unbelievable gravitas with which he delivers his lines (all props to actor David Wayne); there's just nothing I can't adore. And his scheme here is adorably nutty: Find prominent guys in fields that normally wear hats, and kidnap 'em (and taking their hats too, of course; otherwise, what would be the point?).

Also, I think this is the first time that a criminal on the show with an alter ego has their real name mentioned (and with a handle like Jervis Tetch, why wouldn't you? Don't you just love saying it?). "It was a sad day indeed when the word 'parole' was coined," bemoans Commissioner Gordon; because lifelong imprisonment for all criminal offenses is a totally workable idea, and not even a little bit Sheriff Arpaio-esque. (Note: it made me really sad to see that AutoCorrect got Joe Arpaio's name exactly correct; it's almost like the guy is a publicity-whore, instead of an effective and fair law enforcement official)

"Forgive me for interrupting, sir, but [really loud stage whisper] it's the Batphone." Alfred and Bruce really need to work out some sort of less-conspicuous code phrase for when Commissioner Gordon calls. Maybe "Grain futures are short-selling again," or "You asked me to remind you when the Three Stooges marathon begins on television, sir." Just spitball it a while, boys, and see what sounds good to you.*

"They just called to report they sighted a Black-footed Albatross at Sailors' Slew." Be careful what you wish for, folks; I asked the show to switch it up on the excuses to get Bruce and Dick out of the house, and the show fucking delivered.

Chief O'Hara: "Where will he stop?"

Batman: "In a court of law, Chief O'Hara; where he's been stopped before."
Careful, Bats. You're dangerously close to reaching an understanding about our nation's criminal justice system; this could seriously up the burnout factor in a line of work such as yours.

"Before we get to the next victim, when do we get to the next meal? Gettin' bonnets for these dummies ain't fillin' our stomachs, boss." In so saying, the Mad Hatter's henchman offers up a tantalizing question about the economics of being a super villain. Will the show take this opportunity to explore the socio-economic circumstances that lead a pasty middle-aged white guy to come into the employ of an obvious lunatic like The Mad Hatter? Eh, probably not.

The Mad Hatter's palpable delight at the thought of using the machinery in his Wonka-esque "hat factory" to murderize Batman in the most gruesome manner possible comes across as downright unseemly (the fact that his girlfriend seems to get a serious rise out of his grisly descriptions of the upcoming Bat-carnage only enhances this impression).

So, the Mad Hatter's "jury" of kidnapping victims is, so far, all-white and all-male. Next time, Jervis, let your lawyer handle the jury selection, 'kay?

And I'm not summarizing the Mad Hatter's scheme here because:

A) it's predictably hat-centric; and

B) it's perfectly potty and doesn't make an OUNCE of sense.

Finally! The Mad Hatter's kidnapping victim this time is a woman, the proprietrix of a high-end hat shop in Gotham City (and, in case you were wondering, YES: the entire scene IS a "say-something hat" day).

The follow-up interrogation by B&R is priceless.

Real dialogue: "I'm sure the Communists had something to do with this."

Imaginary Batman thought-balloon: "THIS is my primary eyewitness? Christ in a sidecar, I hope there's some DNA evidence around here somewhere."

If "Giant Lighted Lucite Map of Gotham City" isn't the name of a band somewhere... well, then, I don't know what the world is coming to.

I don't always give the music on this show sufficient credit. When the Mad Hatter abducts the sculptor (interrupting the sculptor's very important work of haphazardly chiseling away at an already-completed sculpture), the music cue immediately following the hypno-zap contains several notes of "Rock-a-Bye Baby." Genius!

I'm fairly certain that, nowadays, the Mad Hatter's impression of a French guy would land him almost instantly in front of the World Court.

"Remove my cowl?" asks Batman at the mere suggestion, and his tone suggests that of an eight-year-old who's just been told there's no Santa Claus ("Cowl? You mean my head DOESN'T actually look like this?").

Mad Hatter: "It's working better than I dreamed; Batman's in the dressing room with Boy Wonder!" Whoa, Jervis! Are you trying to steal Batman's cowl, or trying to score some candid webcam photos to use as click-bait?

Dude: You're paying your henchmen to take a serious(ly dangerously-choreographed) beating from Batman and Robin; you're not paying them to laugh at your stupid jokes (that sort of thing takes Joker money, which you ain't got). You've got Batman entombed in a slathering of wet plaster; it's time to take your ball and go home. 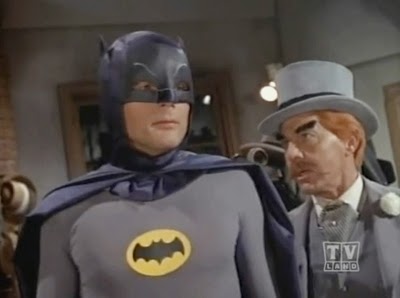 Batman (1966) Season 1, Episode14: "Batman Stands Pat"
Dear Narrator: In the "last episode" wrap up, you don't need to tell us they were sexy women; I think we've all watched enough of this show by now to know that's basically a given. And, in the Things Are Different Now department: showing a picture of an attractive woman with the narration, "Another dish," followed immediately by the phrase, "Another snatch" (even if it's about the kidnapping of a different woman) is pretty bad optics, as they say nowadays.
I know, the sight of Robin tied-up and gagged astride a horse statue isn't supposed to be funny. But, dammit, it just IS. I got to say, Batman's escape from his plaster coffin here isn't exactly loaded down with derring-do: he just kinda breaks through the plaster ("Easier than it seems, Robin; I simply held my breath." While plaster dried. Uh huh.)

Stupid super villain! If you'd watched the first episode of the show, you'd know the Batmobile is protected by Viper.

Come on now, Bats. Did you really need to turn on the Bat-computer just to Google what types of things come in a dozen? You know it costs like 80 grand every time you turn that thing on, right?

So, the Mad Hatter's last intended target is named Turkey Bowinkle, eh? If you say so, show. I guess Batman sends Alfred to go talk to Turkey Bowinkle because he's afraid that if he goes himself, he won't be able to stop laughing at the guy's name.

"Do you usually carry a homing Bat-transmitter in your bowler, Mr. Bowinkle?" is not just a great line of dialogue, it's also the title of my favorite Nancy Sinatra song.
The more the Mad Hatter's scheme comes together, the more like it starts to sound like it was conceived by the Underpants Gnomes:

Step one: Kidnap all 12 jurors from your last trial.
Step two: Kill Batman and steal his cowl.
Step three: ???
Step four: PROFIT!!!
Of course, B&R show up, and immediately fall into the Mad Hatter’s clutches. I notice that the more vitriol he speaks with, the more posh the Mad Hatter’s accent gets. And I'm beginning to think ol' Jervis may have oversold the lethality of the hardware in his "hat factory" just a bit; alas, when the Mad Hatter is finally pitched into his own vat of acid by the Caped Crusader, he doesn't seem to be much worse for wear when they fish him out.
And let’s spare a moment to think about the poor henchmen: Recipients of a capital ass-whuppin', but not so much as a single paycheck.
#samebattimesamebatchannel