A Preview Of LEGO Minifigures Series 13

I'm going to start off this article saying that I love LEGO minifigures. If you have read my articles in the past then this will not surprise any of you. They will always be my first love of LEGOs ever since I started collecting a few years ago. I don't exactly know what it is about the little figures but they are possibly the most addicting toy I have ever collected.

Many years ago when I first heard about blind bag packaging I thought it was just plain dumb. I mean why would someone buy something that they didn't know exactly what they were getting. It seemed insane to me and I swore that I would never partake in collecting such a thing. Well, that was a long time ago and before LEGO started selling their minifigures in that same said packaging.

There is just something about opening that package and not knowing exactly what you are getting. It's like christmas morning. And I don't know how they do it but just by putting that little insert into each bag I can never tell which figure is in there. No matter how long I mash on that bag trying to decipher each piece I just can't do it. So I usually end up with a lot of duplicates but I'm okay with that due to how much fun I have opening them.

So let's get down to business. The Wednesday before Thanksgiving, LEGO released pictures of all 16 minifigures in the next series which is number 13. I was elated because I didn't expect pictures to be released this quickly. I wanted to do a quick rundown on my thoughts on the series based on the pictures that were released. 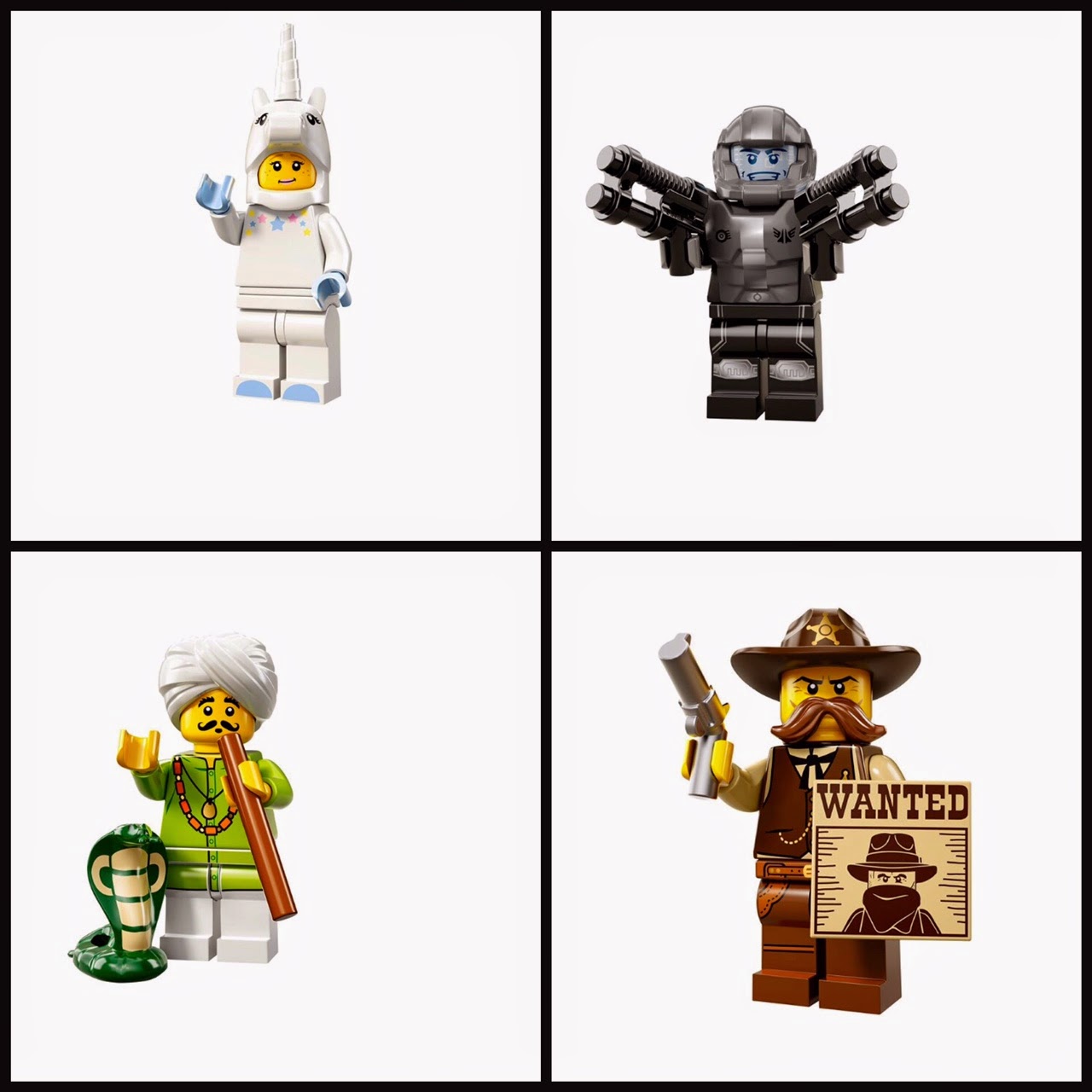 First up we have Unicorn Girl (Top Left) who doesn't seem to come with any accessories but its a frigging unicorn. Next, to her we have a Galaxy Trooper (Top Right) who comes with some pretty sweet guns. Snake Charmer (Bottom Left) includes a snake which is pretty cool. Sheriff (Bottom Right) is not my favorite. Sure he comes with tons of accessories & a mustache but I'm just not into the old west stuff without playsets. 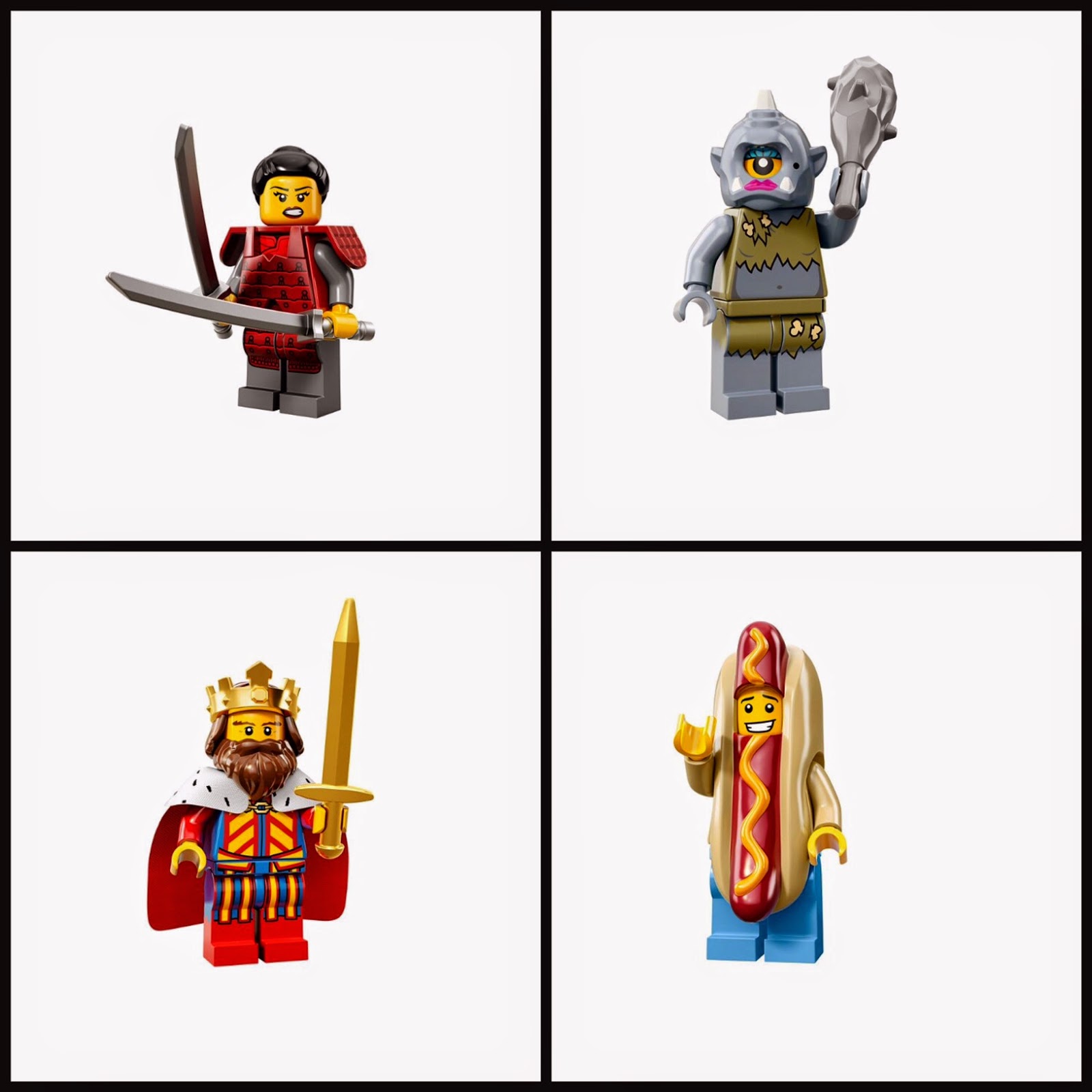 Now onto the Samurai (Top Right) which comes with two swords that are not just generic and actually look like samurai swords. Lady Cyclops (Top Left) terrifies me to know end. Between the pink mustache that is suppose to be lips and the belly shirt I just think this is wrong on so many levels. Classic King (Bottom Left) is one that if I was told about, I would be against. But the execution was done perfectly with bright colors, an awesome looking sword, and look at that fantastic beard! I'm not sure I can put into words how excited I am about Hot Dog Man (Bottom Right) because he just makes me laugh just by looking at him. I mean look at him and try not to laugh. I dare you. Go ahead. See you can't do it can you. 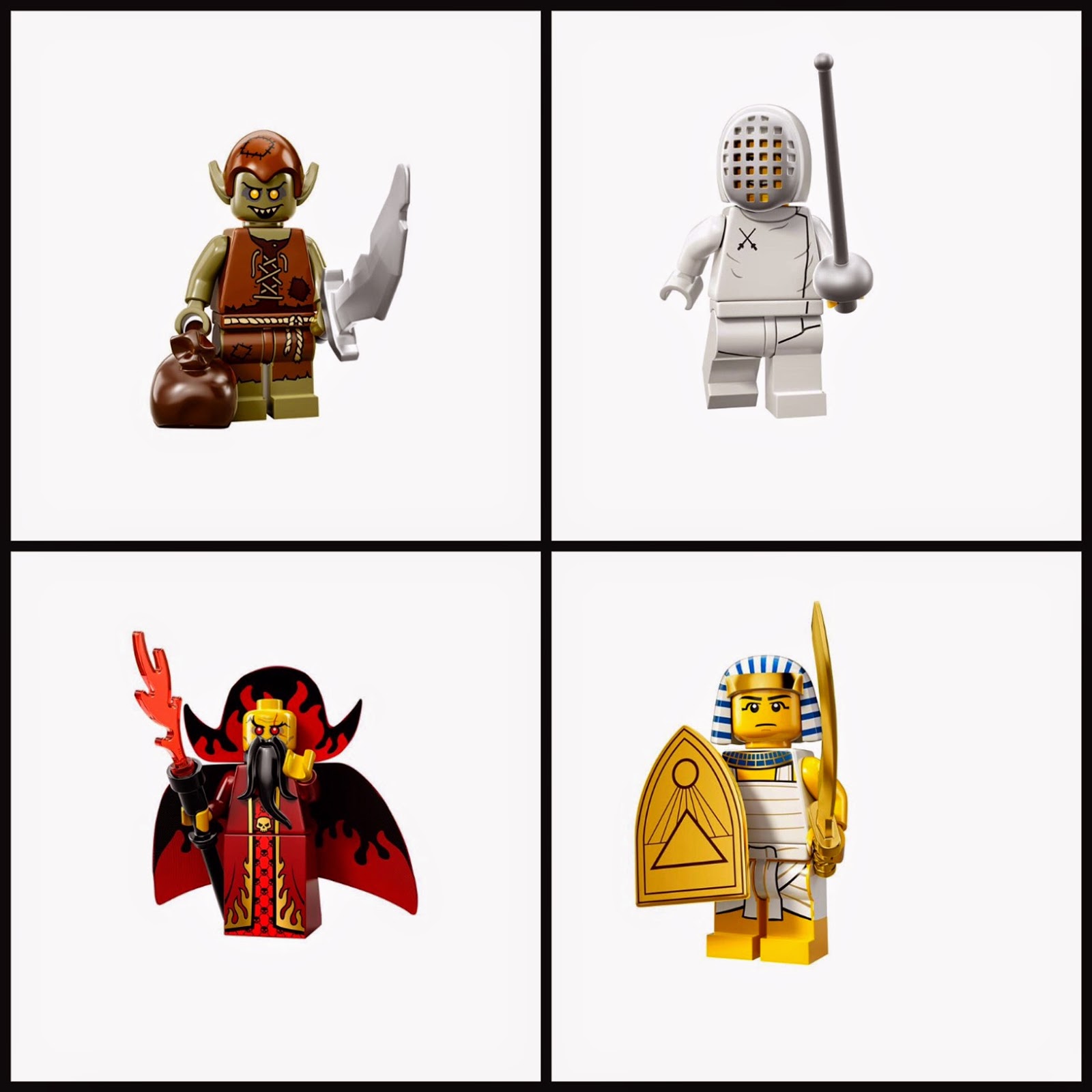 Goblin (Top Left) might as well be called Green Goblin because that's exactly who he looks like. That being said, isn't he AWESOME! The Fencer (Top Right) bores me to no end but is a necessary evil in a series like this. The Evil Wizard (Bottom Left) just looks well, evil, with an awesome cape and some sort of fire staff. At first glance I didn't like the Egyptian Warrior (Bottom Right) but this one has grown on me the more I look at it. 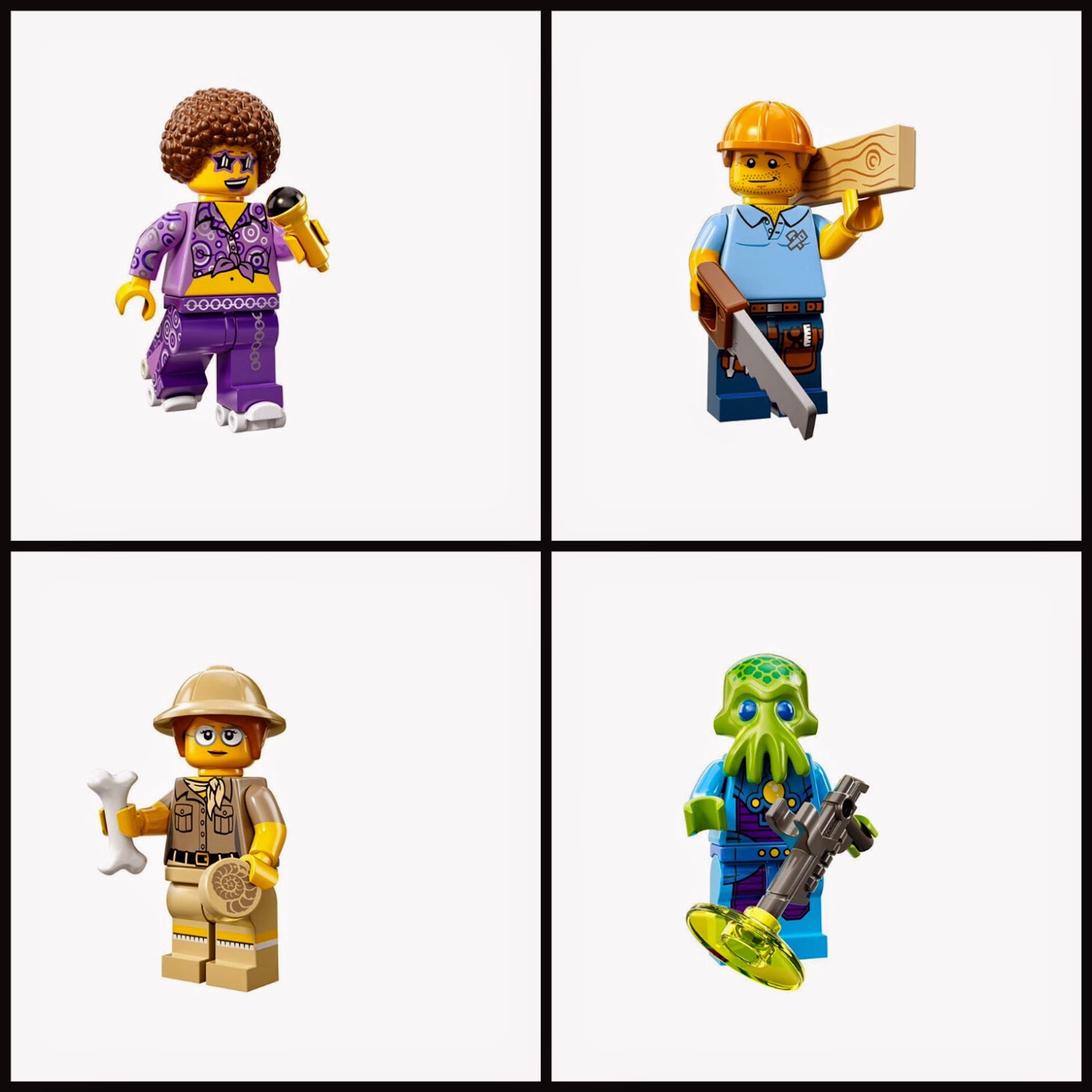 Diso Diva (Top Left) is going to give me nightmares with that fro and shirt tied in a knot. They released a male disco dude in a much older series so this would be a good match for that one I guess. Some might think that the Carpenter (Top Right) is boring but for some reason I really like this guy. The saw and wood accessories are plain but I want this one in my collection. The Paleontologist (Bottom Left) is a welcome addition and its nice to see that this series has more female minifigs in it which has been a growing trend. And last but not least we have an Alien Tropper (Bottom Right) who will be a nice enemy for the Galaxy Trooper that is included in this set. The gun is kind of blah but the face sculpt is sweet.

My overall thoughts on this series is mixed. I like a lot of them but there are many that I just don't care about. This seems to be a step back from series 12 which I enjoyed immensely. I will reserve my final thoughts until after I have the series in hand. Although Hot Dog Man is quite possibly my favorite LEGO minifig that has been produced so far.