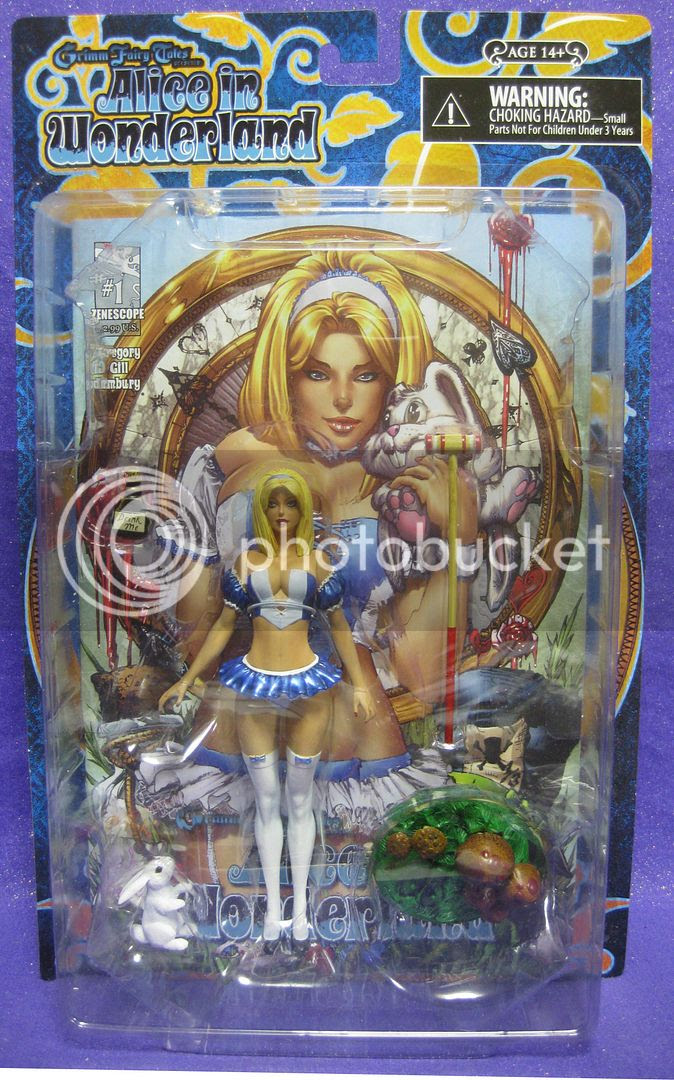 Be sure to listen to Episode 41 of the Needless Things Podcast for your opportunity to win today's figure, as well as a bunch of other great stuff from Zenescope Entertainment! More details coming soon!
When I first started talking to the Zenescope rep about covering stuff on the site I pointed out that our main thing was toys, so if Zenescope ever put out toys we’d love to review them. Sure enough, Zenescope is now producing figures. They have a line of Minimates and hopefully I’ll get to check those out at some point, but they’re also releasing 6” scale figures sculpted by a guy that’s a true legend in the field of comic book action figures – Clayburn Moore!

Clayburn Moore is a sculptor that I first became familiar with because of his work on statues of comic book characters. Nobody can sculpt a sexy lady like Moore can. He doesn’t just sculpt females, but his work with the female form is unmistakable. Shortly after Todd McFarlane forever changed the face of the toy industry, Clayburn Moore started his own company called Moore Action Collectibles. MAC produced finely detailed figures with limited articulation from properties like Witchblade, CHAOS Comics, and Buffy the Vampire Slayer.

You guys know I put a heavy emphasis on articulation, but the MAC figures I own are some of the best-looking in my collection. As an added bonus, they are made of sturdy materials and don’t explode when they fall over like some other companies’ products do.

With Zenescope’s emphasis on sexy ladies, there was no better choice to design their action figures than Moore.

Personally I am anticipating a figure of Sela from Grimm Fairy Tales, but there was no better way to kick off the line than with Alice from Wonderland. She’s one of the more easily recognizable characters from Zenescope’s roster and is a solid choice as a gateway for new collectors. 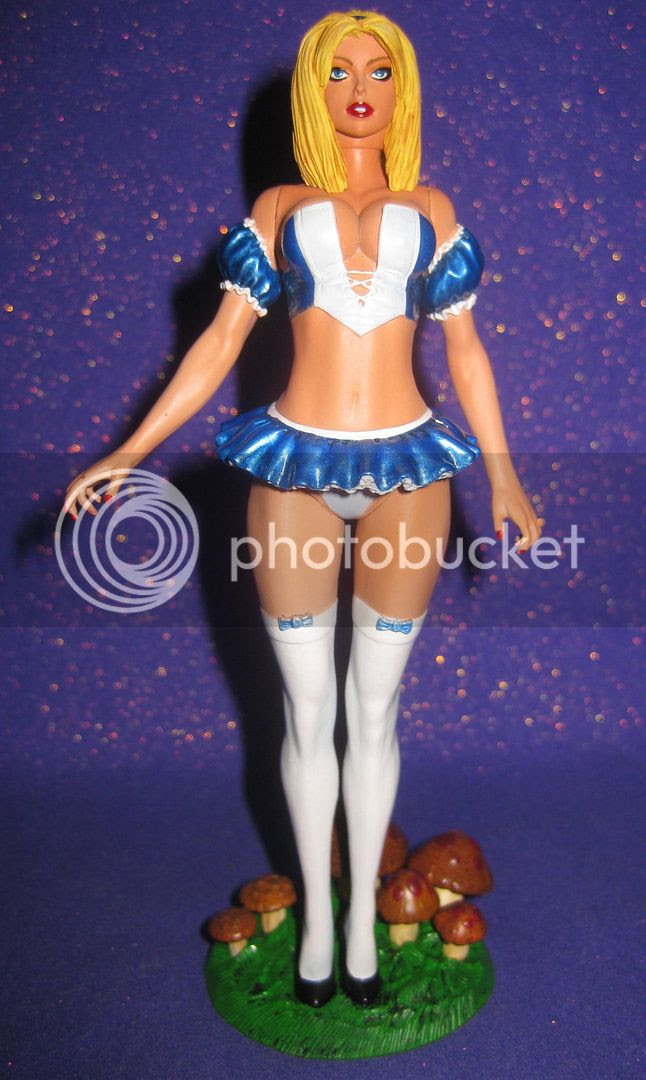 I didn’t know that Clay Moore was doing these, but as soon as I had Alice in hand I recognized his work. There’s just no mistaking his style and attention to detail. This figure will fit right in with the older MAC releases.

It’s refreshing to see the bright colors of the packaging and of the figure itself. I love my DC Collectibles figures, but visits to the comic shop tend to be pretty subdued and drab as far as toys go. It would be nice to see something like this in my pull box. 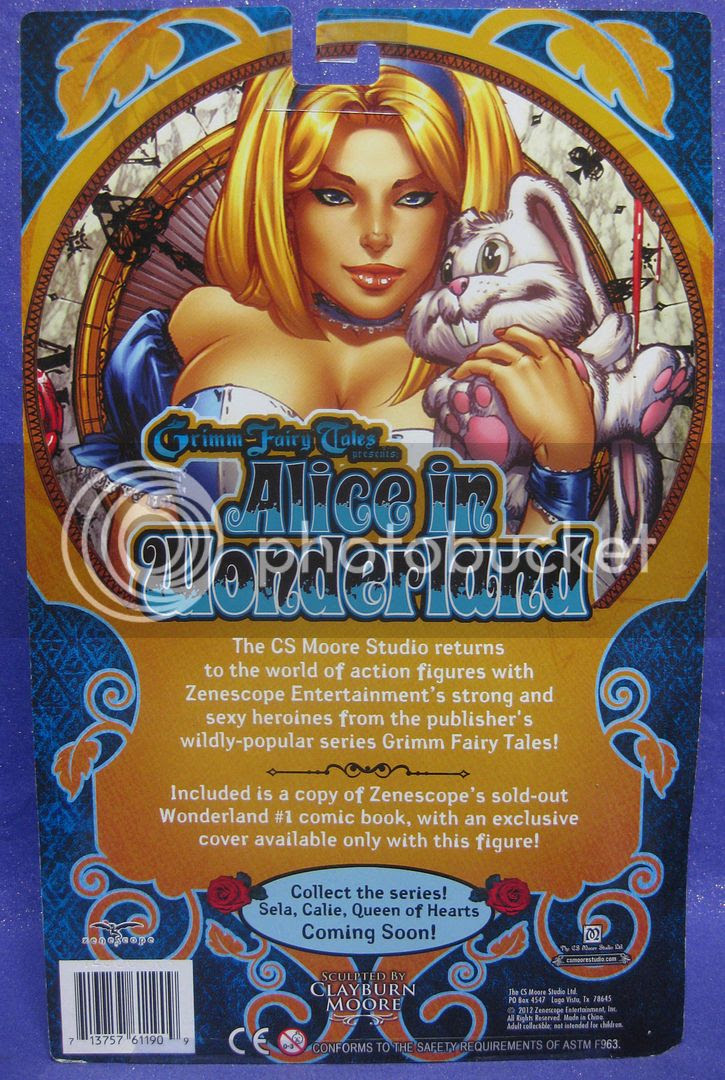 I won’t say that all it takes is packaging to make a good first impression on me, but it’s certainly a step in the right direction to have a traditional blister card. When I see clamshells I think, “Ugh”, and “Ugh” is not the first word you want me to relate to your toy. The graphics on the card are bright, clear, and eye-catching. The comic book included with the figure does a nice job of providing character-specific art. The blister itself seems unnecessarily gigantic, but otherwise this is a solid box. 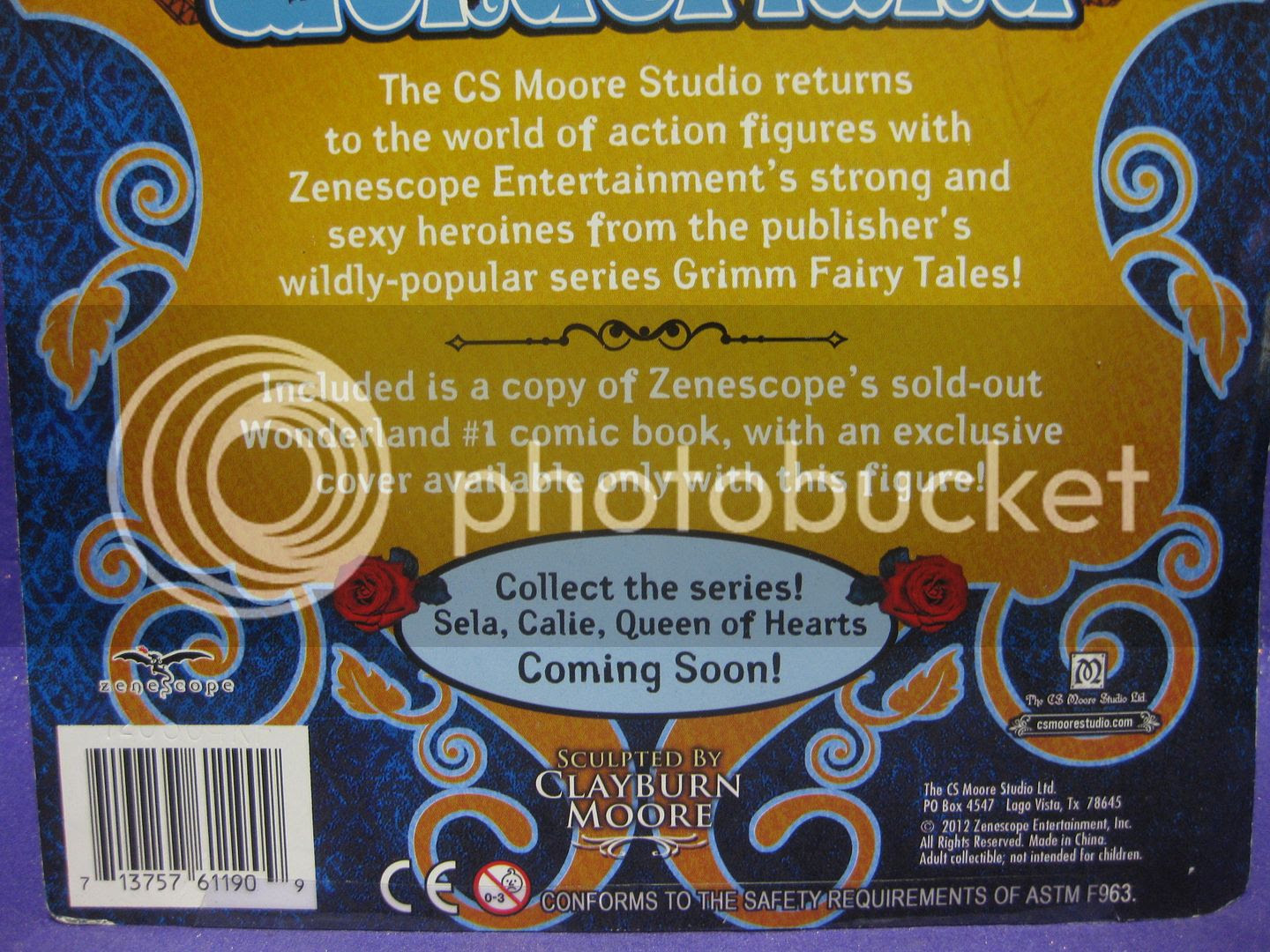 Since many toy collectors might be unfamiliar with Wonderland and this iteration of Alice, I think it might have been a good idea to include a bio on the back. But the blurb about Moore was definitely a good call. And I suppose the included Wonderland #1 should do a good job of explaining the character. I am happy to see there are plans for Sela. A visit to Moore’s website reveals that Calie and the Queen of Hearts are on the way first, though. 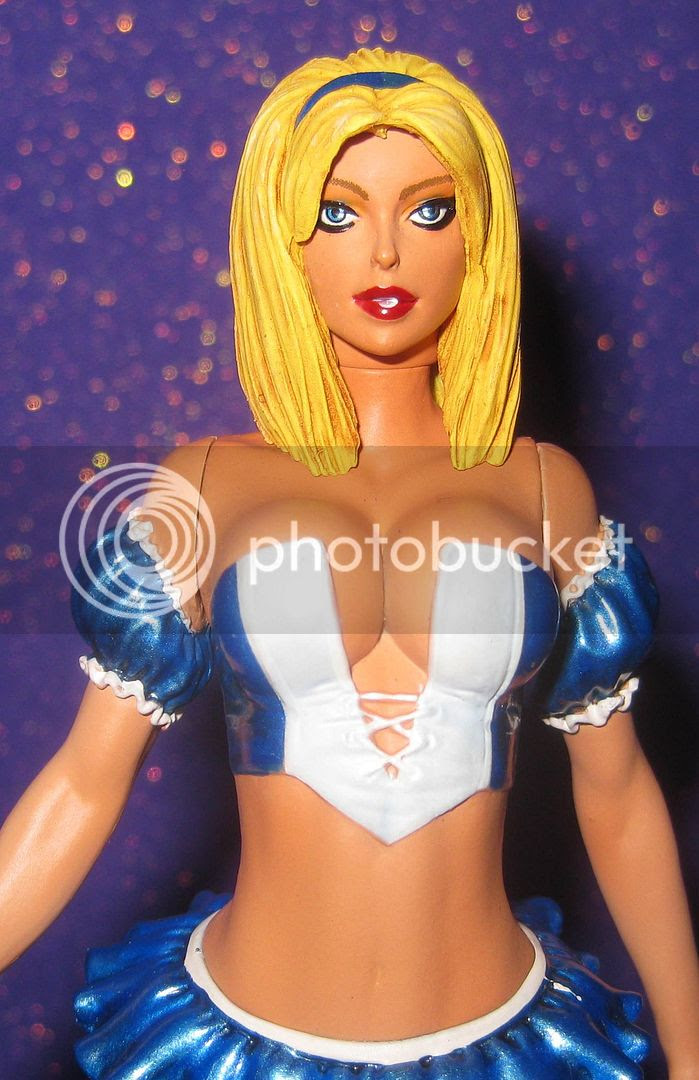 Rather than specifically adapting the art of the comic book, this figure is done in what I would consider to be the “Moore Style”. This isn’t a bad thing, as it faithfully represents the character while allowing it to be compatible with previous Moore figures. This makes both fans of Zenescope’s comics and collectors of Moore’s figures happy. And you definitely want to chase both demographics.

The head sculpt looks great. The hair has a clear style and definition. Alice’s face is pretty heavily made up, but retains the innocence the character should have. The paint is fantastic. The shading on the hair is well done and the placement of the apps is precise. There are plenty of companies who do a fine job of putting the colors in the right spots, but the details on this figure’s head are truly noteworthy.

The rest of the figure is a cleanly sculpted combination of anatomical and wardrobe improbabilities. Alice’s body is a trademark example of the aesthetic preferences of both Moore and Zenescope. Only cut joints are used, so everything is smooth and rounded – unbroken by the usual kinds of articulation. 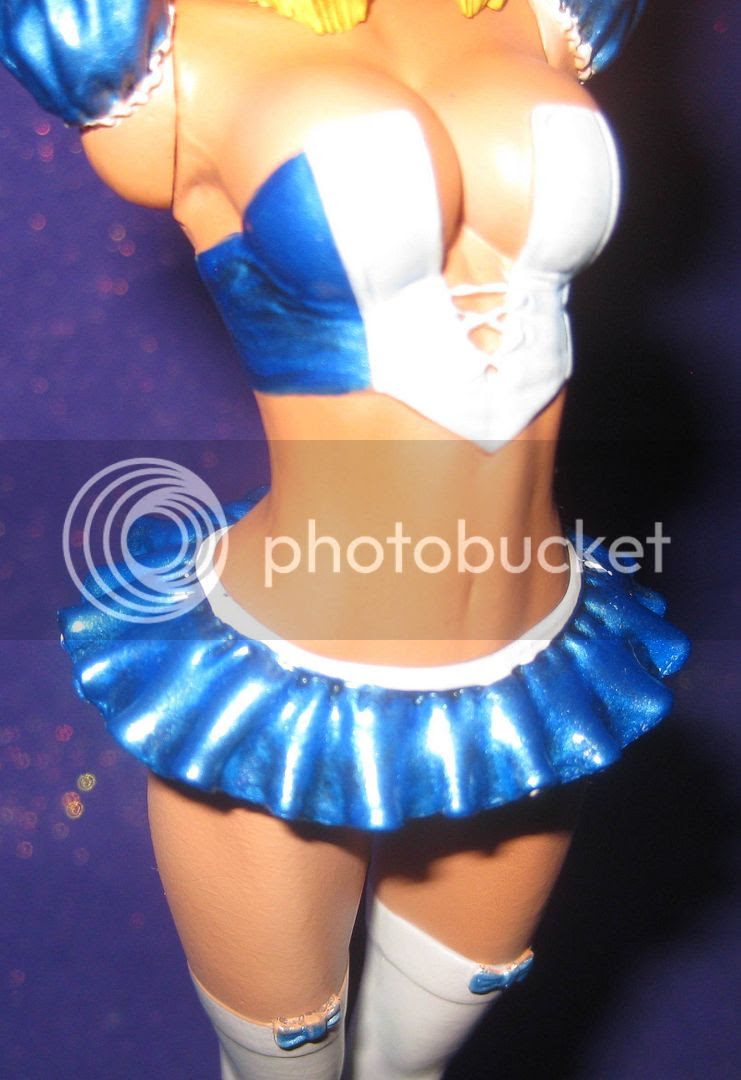 The detail in Alice’s clothing is just as precise as that of her head. All of the lace, ties, and panels are well defined. Even without the paint the details would be clear. I appreciate it when sculptors don’t leave the details to paint. The clothing also has a nice thickness. The points where it lays on Alice’s skin are significantly raised. Again – Moore wasn’t leaving it to the paint to define things.

This is the part where I have to talk about panties. Because there’s no way to look at this figure without thinking, “Well, you sure can see her panties”. These, too, are clearly defined and have enough of a coat of white paint to work. White on top of any color is a tough thing to get right because it just never seems thick enough. In this case the paint app got the job done.

The stockings are solid too, except for a bit of missing paint at the top of the right one. It isn’t hugely noticeable, but in the process of taking pictures it did become apparent. 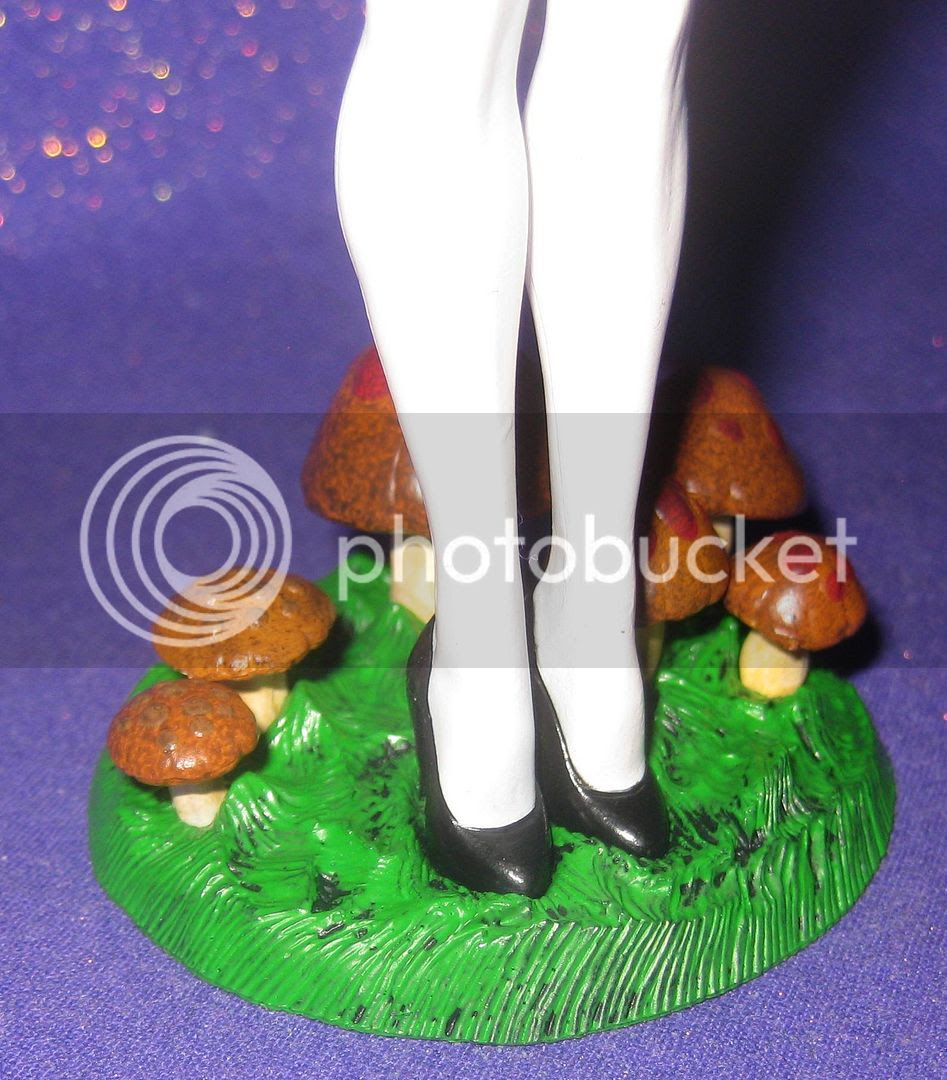 The shoes are simple and the black paint manages to not slop over onto the stockings. I’m also impressed with Alice’s glossy, red fingernails. They are tiny details, but they add a lot and look good. 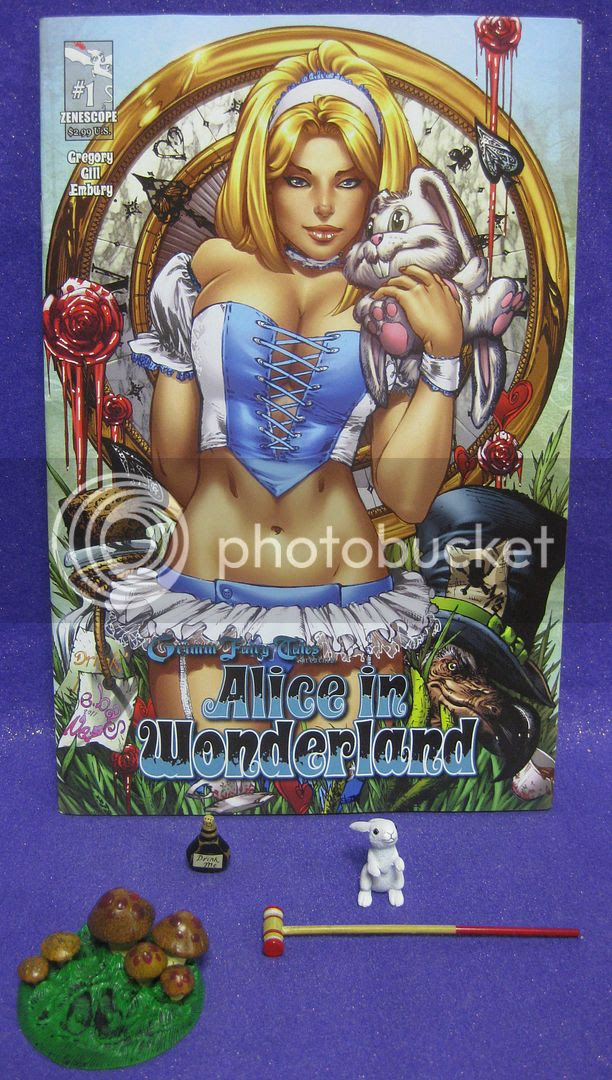 The Alice figure includes a copy of the first issue of Wonderland, the white rabbit, a croquet mallet, a stand, and a “Drink Me” bottle.

Mrs. Troublemaker was quite happy with the croquet mallet. She said that it’s an important part of the story and that Alice figures rarely include it. As for me, I think it looks exactly like a croquet mallet. Good job. Also, it’s molded from a rigid plastic, so it holds its shape. The White Rabbit looks great, which you cannot tell from this photo. I have problems taking pictures of white things sometimes. Somebody buy me a new camera for Black Friday. 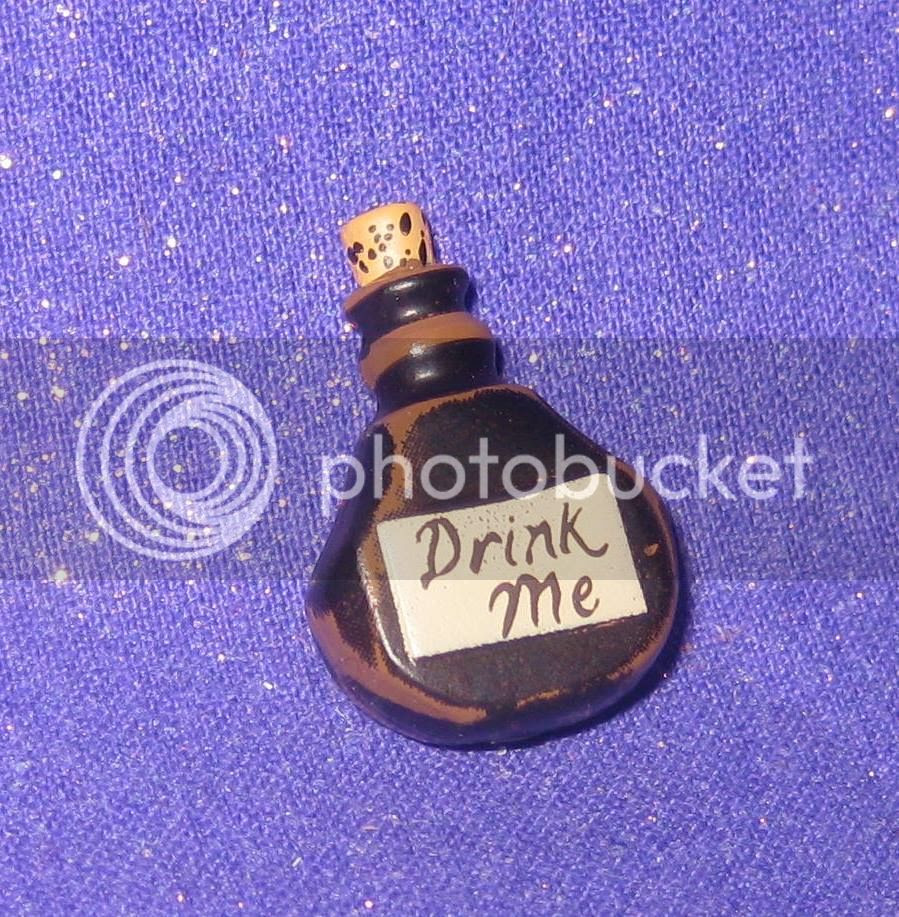 The “Drink Me” bottle has a beautiful paint job. The letters are precise and the wear on the bottle looks really good. The stand is nicely sculpted and has a great paint job. It’s good that it looks so nice because it is a necessity. Alice isn’t standing on her own. She does fit securely on the stand and the pegs go deep enough into her feet to provide good support. I don’t think she’ll develop the “NECA lean” over time.

I was surprised to find that the figure can interact with all of the accessories. At first glance it seems that those hands aren’t made to hold anything, but they can securely grip both the mallet and the bottle. This is a great looking figure, but it’s not exactly meant for play.

With five points of articulation – neck, shoulders, and hips – there isn’t a whole lot going on. The head doesn’t move much because of the hair and the hips joints seem to be mostly there just because. The shoulder joints allow for different arm poses, none of which look particularly natural without elbow joints.

The accessories add a bit of play value, but this figure doesn’t do much more than just stand there looking pretty. 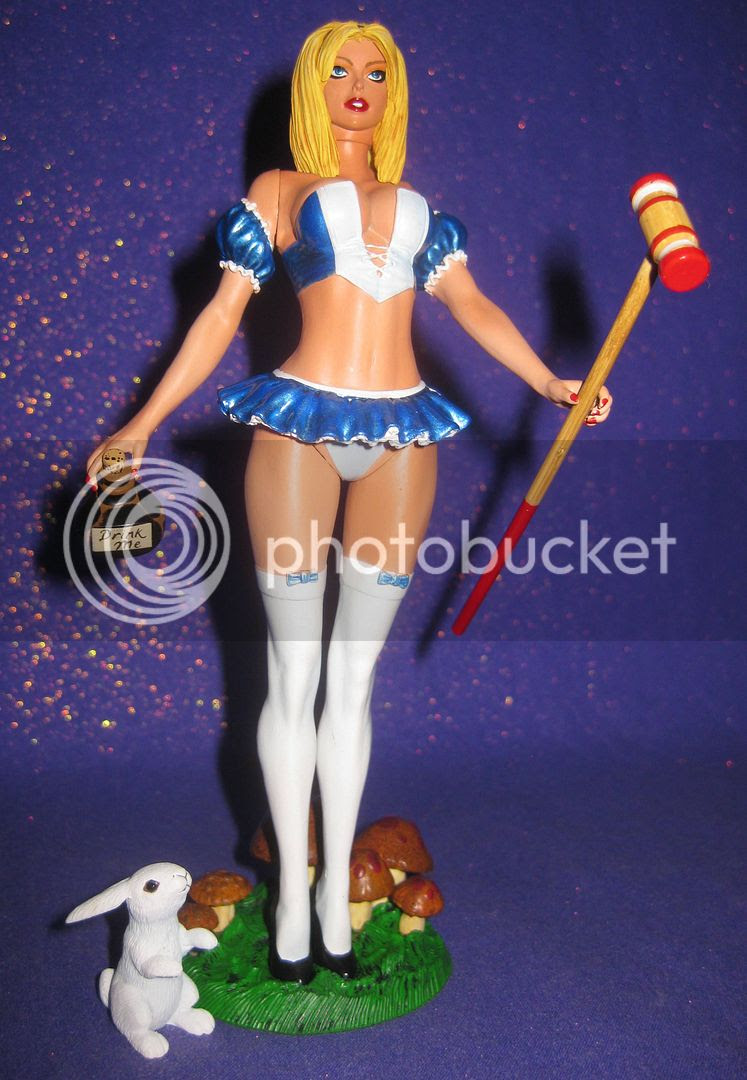 This is a fine representation of the Alice character from Zenescope’s Wonderland series. She may not be my cup of tea (so to speak), but fans of the comic will be happy, as will fans of Clay Moore. The thing to remember is that this is a collectible figure, not an “action” figure. It accomplishes exactly what the creators intended and will look great on the shelf.

Having said that, I really am looking forward to a Sela figure.

If you’d like an Alice of your own, buy one from Amazon and help out Needless Things!: