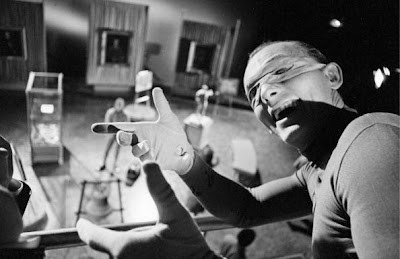 Enter the wise, benevolent (and most importantly, U.S.-friendly) King Boris. As sole monarch of an unnamed vaguely-European country, King Boris has arrived bearing an important gift of friendship betwixt our two nations (in case you didn't know this was a fictional European country).

"When is a person like a piece of wood?" Any men-folk who've woken up REALLY needing to pee already know the answer.

Real Chief O'Hara dialogue: "There's no doubt about it; the Riddler, that "infernal prince of puzzlers" as you call him, is up to his old tricks."

Imaginary Commissioner Gordon dialogue: "I'mma interrupt you right there. I have NEVER abused alliteration in such a fashion; you best walk that shit back right now."

Every time one of Commissioner Gordon's lines starts with "I have a fine police force here, yet…", you know what's coming next. I would HATE to be a jaywalker in Gotham City; I mean, what else do the police there have to worry about?

Alfred is busily polishing the Batpoles; heh heh heh heh heh. It bears noting, at this juncture, that Bruce's pole is of considerably wider girth then Dick's (totally not making that up!).

"Mercy alive! If I didn't know you two better, I'd think you were up to something." That's right, Aunt Harriet; you just keep whistling past the graveyard, and living in Stately Wayne Manor rent-free.
The chintzy "Miss Galaxy pageant" set juxtaposed with stock footage of a huge, crowded audience is priceless.

Hmm. Miss Stage Right kinda has some badonkadonk going on; funny how I never noticed that as a child.

The Riddler arrives, and clumsily steals Miss Galaxy's priceless tiara; luckily for him, the Dynamic Duo's response (to a crime Batman successfully predicted) somehow manages to be even more clumsy.

"Hey, Batman; the Riddler's over there, like 15 feet away, taunting us with the fake tiara and giving us another clue. You think maybe we should, I don't know, go over there and whomp on him a little?"
"No no, Boy Wonder; our most prudent course of action is to remain seated here in the Batmobile. We'll have the chance to go upside his head in the next episode."

Enter the "sinister River Rats gang," who clearly blew their costume budget on an ultra-sturdy cheese slicer (because they REALLY LIKE CHEESE; get it?).

Next scene: the wine cellar at the Mushroom Club. I realize that the sound of multiple wine corks popping is supposed to signal eminent danger to King Boris, but the sound effect used couldn't possibly be considered anything other than whimsical.

After King Boris is snatched away via a trap-door in the wine cellar (man! The Riddler must REALLY want to kill Batman; because, so far, this seems like an awful lot of work), B&R head back to the Batcave, to decipher the clue the Riddler has given them (NOTE: Batman's typing on the Batcomputer would make Mavis Beacon's head EXPLODE).

"And, at the obsolete water and power plant…" Before we go any further, let me offer a suggestion to any municipal planners out there: Treating millions of gallons of water at the same place where you generate electricity is probably a sub-optimal idea.

Ah, the classic vertical wall climb. As always, Robin is in front; hey, Caped Crusader, how about a little Bat-personal space, huh?

Hey, Riddler: Laughing at your own jokes is kind of off-putting; knock it off already.

Oh, no! The Dynamic Duo are strapped to drive-shafts that rotate 1000 revolutions per second (make up your mind, Riddler: do they rotate or revolve?)! Will the completely-and-obviously-dummies strapped to these fiendish whirling dervishes survive until next time? What are you, some kind of idiot? 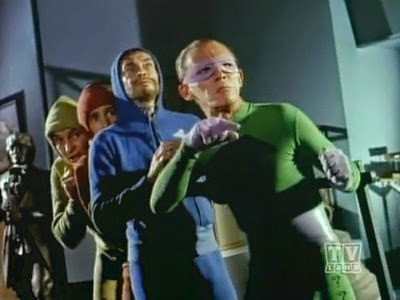 (I don't even feel like trying to parse out that title right now; so let's move past it, shall we?)

When last we left our heroes (or, at least, poorly-stuffed dummies thereof), Batman and Robin were about to be spun to death at 10,000 revolutions/second. Luckily the Bright Knight had managed to sabotage the control panel last episode (off-camera, naturalement), thus sparing their really-badly-made avatars a grisly end.

Meanwhile, at the lair of the River Rats gang (who make Badger and Skinny Pete from Breaking Bad look like Lex Luthor), the Riddler, wearing his question-mark suit so much better than Matthew Lesko, arrives to set them to their work (and to waste an inordinate amount of screen time lecturing the gang on the value of punctuality). His rhapsodizing on the demise of the Dynamic Duo is a textbook example of just why Frank Gorshin was so terrific in this role.

The Museum of Fame, huh? How come I don't see any statues of Coco or Leroy up in this snizz?
"Over here, for instance, we have the original Gotham City Commodity Exchange building."
What is this? A Commodity Exchange for ants?!? (apologies to Zoolander)

The Riddler's henchgal (again in her very-disturbing Madeline cosplay) delivers an important message to Commissioner Gordon: If the Riddler doesn't receive one million dollars by midnight, the Queen of Freedom Monument will be blown sky high.

Jumping Jesus on a pogo stick, Bruce Wayne! You've seen FIRST-HAND what a collection of stumblebums the GCPD truly are, and yet you're still gonna trust them with $1 million? You've got a pair on you, I gotta give you that.

The fake Batman who then shows up at police headquarters to throw the cops off the trail has a perfect Batman costume; he should be home free, as long as his acting isn't terrible. Whoops! Oh, well. Never send a rat to do a bat's job, I guess.

I'm a little confused about what the Riddler hoped to accomplish by sending over the fake Batman in the first place. This seems to me the point at which his plan goes from being "sophisticated" to simply being a symptom of advancing mental illness. "I've really outdone myself this time!" Okay, Riddler, it might be time to dial it back a bit; this level of self-congratulation makes you seem less like a super villain and more like a writer for Salon.com.

You know, Robin, that's almost the exact place on the SOVIET ERA NUCLEAR POWER PLANT BATMAN USES TO POWER THE BATCAVE (that's ONE way to stay "off the grid," I guess) from which Molly fell to her untimely and gruesome death (way back in episode two); you might want to consider a safety harness next time you're up there (Notable Quotable: "Well, stop fiddling with that atomic pile and come down here!").

So, the Riddler and his gang arrive at the Queen of Freedom monument to collect their money and deactivate the bomb, only to find the booby-trapped statue is missing, and in its place a riddle from Batman. Now, I pick on Batman a lot in this show, but that is a SICK BURN on his part.

"Pow! Zowie!" ensues (you know the drill by now), with only one slight wrinkle: the use of the slide-whistle sound in this fight has now spoiled me for all the fights in the course of this series that don't have it.

Cue sultry saxophone music: "I'll never understand how girls like you get involved in things like this." Geez, Batman: paternalistic much?

Of course, in the final scene, Aunt Harriet invites Bruce and Dick to come with her on a visit to the Queen of Freedom monument. Real Talk now, Batman writers: You've got to stop going back to the well for gags like this. I realize that, structurally, it's the comedic cool-down for the episode; but, it ends up feeling like the exact equivalent of Aunt Harriet saying, "Say, Bruce, want to go visit the grimy alley where your parents were murdered?"

Time for a little more Inside Baseball: I generally dictate these into my phone for the first draft; and my phone actually AutoCorrected "grimy" as "Grammy." Ah, from the mouth of iPhone babes…