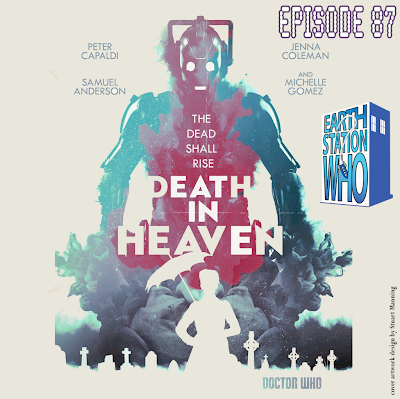 I missed being on the last episode of ESW due to scheduling difficulties, so it was good to be back for the big finale of the season.

This season of Doctor Who has been a roller coaster for me, but I’ll get more into that when I write about our forthcoming season wrap-up episode. For now I’ll just say that I was hoping for an epic conclusion and have no plans to buy the Blu-ray when it comes out.

The first episode of the two-part finale had a great story, but I felt like the pacing was slow. Every time the show decides to be about Pink and Clara I want to turn it off. I simply don’t care. The focus of Doctor Who has been slowly getting away from the Doctor for the past several years and it has finally gotten to the point where I am more and more often finding it unacceptable. With “Dark Water” we got a lot of cool plot points, the return of the (proper) Cybermen, the return of the Master, a weird look at the Afterlife, and too much focus on a relationship that I don’t give a Tetrap’s ass about.

Episode two – “Death in Heaven” – was a lot more entertaining. I thought the opening with the Brigadier was excellent and that Michelle Gomez was fantastic as the Master. Things moved along really quickly and I think that’s when Doctor Who – and the Doctor himself – is at its best.
And then the inevitable happened and they did a thing that was not necessary to the plot and did not advance anything in any way and proclaimed that the Doctor was the President of Earth. It was stupid and groan-inducing and it ground my enjoyment of the episode to a halt. It’s that kind of pointless absurdity that is keeping me from fully enjoying this era of Doctor Who. Those things that are out of character or don’t make any sense and don’t contribute to the narrative, but it is apparent that somebody in charge wanted to make a joke or create a situation and just said, “Fuck it, I want to make that joke about the Doctor calling the President and idiot and then he’s the President.”

It also really bothers me that the Master has to be crazy and silly now. I hate this. It was kept to something of a minimum (compared to John Sims, anyway) in this episode, but to me the Master is evil, sinister, and very together. Gomez was very good, but I didn’t like the parts where she was acting crazy and referring to herself as “bananas” or whatever. Thankfully the climax of the episode avoided that sort of behavior and I actually thought the Mary Poppins visual was funny. I’m shocked they didn’t ruin it by having her say (in Adam Sandler voice), “Look at me! I’m evil Mary Poppins!”

Other things I enjoyed were the homages to James Bond, Night of the Living Dead, and The Twilight Zone. And the story was very strong. I like the idea of this artificial afterlife and the Master using it to create undead and seemingly undefeatable Cybermen, only to give them to the Doctor to test his resolve as the purported “good man”.

There’s more, but you’re going to have to check out the newest episode of Earth Station Who to hear it all, as well as the thoughts of the rest of the ESW crew!


EARTH STATION WHO 87: DEATH IN HEAVEN