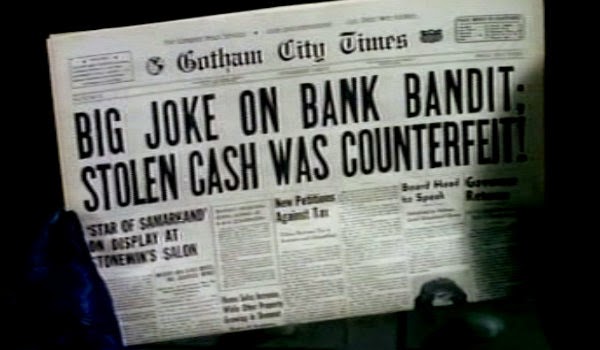 "A quiet, peaceful night in the city of Townsville Gotham City; except at the First National Bank, at precisely 8:37." Then, an explosion straight off a sound-effects record rings out, and the establishing shot of the bank's exterior shakes a little!

Inside, a safecracker who doesn't yet understand the inverse causal relationship between "amount of high explosives used" and "quantity of paper money successfully retrieved" is confronted by an intrepid stalwart bank security guard. Now, if you don't have enough time to follow "Hands up! Don't move," (which is it, flatfoot?) with the customary "or I'll shoot!" before you actually DO shoot, then you'll probably end up in front of some kind of review panel of some sort. Luckily for you,

so you're probably gonna get the opportunity to shoot more unarmed suspects down the road (live the dream, buddy).

What's that, Commissioner Gordon? A thief who robs banks every April 1st for the exact same amount of money each time? Oh, if only there were some sort of pattern for your employees-who-you-could-fire-at-any-time to latch onto; I bet they'd bust this whole thing wide open!

What? No one answered the Batphone? Good thing they're outside gazing into the telescope, where they can see the Batsignal. I mean, if they were, say, down in a private sex dungeon or something, Gotham City would be SCREWED.

"A town-hall lecture on Latin American affairs"? Well, at least they're stretching their legs on the excuses to get Bruce and Dick down to the BatCave.

Note: I don't give a hairy rat's patootie how unnecessary to the plot it is; if you've got a car as awesome as the Batmobile, it behooves you to feature as many shots of it as you possibly can in every episode. End of story.

Oooooh! Not only is Zelda the Great the first obscure villain featured on the show (as well as the first woman), but she's also the first one that they don't already know about in the show's mythology (criminy, I sound like a pop-culture douche). Intriguing...

"Be on the lookout for a woman in an orange dress."

"An orange dress! Good heavens, what is the world coming to?"

(okay, I may have altered that last line a bit)

Batman: "No time to worry about that now; our task is to fight crime."

Translation: I don't give a fuuuuuck what she's got going on in the bathing-suit area, I'mma beat the brakes off her just the same.

"Master Robin?" C'mon Alfred; the LAST thing you should be doing is playing into their delusional architecture. All that does is enable them.

So, the "criminal genius" behind this whole thing is fooled by a planted news story that the money he stole was counterfeit? You know what they say: Criminals don't become criminals because they're smart.

Also: it's kind of counterintuitive to have a magician be lured by the "easy money" of crime; after all, an integral part of being a magician is the willingness to invest WAY more time and effort into an endeavor than it seems worth.

Something I'm learning from this episode: a stage magician who's a sexy woman is, as it turns out, still annoying.

But the giant padlock on this escape trick tank is EVERYTHING.

Oh, poor Aunt Harriet! Didn't she read on Snopes about all those "playground matron" scam phone calls going around?

Really, show? A slide whistle when Batman and Robin jump off the balcony? It's enough to make me think you're not taking this whole thing seriously.

So maybe I'm calling it a bit early, but so far Zelda seems like, far and away, the most capable of all the Batman villains on this show.

Holy reversal, Batman! This episode's cliffhanger actually features Aunt Harriet stuck in the deathtrap. And Zelda doing her knitting while Harriet dangles helplessly over impending fiery death behind her is very possibly my favorite visual image of the entire series so far. 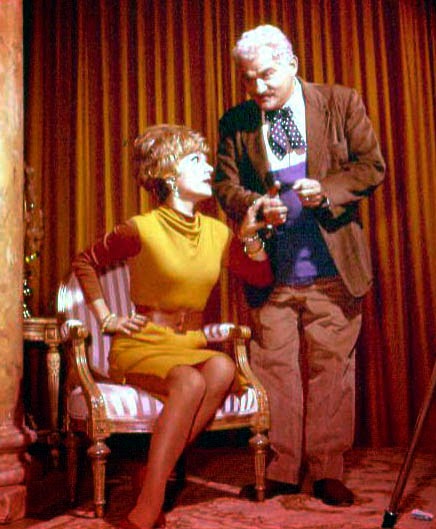 When last we left our heroes, they were… well, they weren't actually in any danger; but poor Aunt Harriet was left dangling over a vat of flaming oil.

While waiting at police headquarters for Bruce Wayne to show up and deal with the ransom situation (presumably, Batman was still licking his wounds over having been completely outsmarted by Zelda the Great), Commissioner Gordon and Chief O'Hara (in shirtsleeves! THIS IS SERIOUS) engage in some speculation regarding the lives of the 1%:

Chief O'Hara: "I'll bet Mr. Wayne is out on some yacht, eatin' sherbet and changin' his clothes!"
Now, I was born in 1968, and I guess it's possible that this is some bit of 1960s idiom with which I'm unfamiliar; but I checked on Urban Dictionary, and found bupkus. So I leave it to you, dear Gentle Reader: Was this EVER a commonly-used expression?

Luckily, Bruce Wayne shows up presently (his clothes-changing and sherbet-eating duties having been faithfully discharged), in order to execute Batman's brilliant strategy for securing Mrs. Cooper's release: preempt local television to engage the kidnapper in a bitchy radio call-in show.

And, yes, the following scene is pretty amusing, but a couple of Baba Booey-style crank calls would have sent it over the top.

"Hello, criminals, wherever you are out there. Do you hear me, criminals?" (Do You Hear Me, Criminals? It's Me, Commissioner Gordon was my favorite book as I approached adolescence)

"Enough of this prattle!"

"You already have your filthy lucre."

Anyhoo, they convince Zelda that the money she stole in the first episode was real (by showing her a signed affidavit from the editor of the Gotham City Times reading, "This morning's headline was entirely untrue." I don't want to start making New York Times jokes here, because I'll never be able to stop).

So, Aunt Harriet is off the hook at the end of the chain hanging above a vat of flaming oil. Upon her return back to Stately Wayne Manor, Alfred finds on her person a clue as to Zelda's whereabouts (the World's Greatest Detective's butler, ladies and gentlemen!).

As B&R speed toward the showdown with Zelda (and her Svengali, Eivol Ekdol), Ekdol reveals his master scheme: The high-end escape trick he's been developing for Zelda is not actually complete. He plans to trap Batman in the locked chamber, and then copy whatever method Bats uses to escape it (let that sink in for a minute). Then, when Batman emerges from the trap, two gangsters from Central Casting will be hiding in prop sarcophagi, waiting to fill the Caped Crusader with lead ("In my country, we have an obscure peasant saying: 'Dead men tell no tales.'" Really, Eivol? Is it really that obscure? When I think, "obscure sayings," it's usually something more along the lines of, "eatin' sherbet and changin' his clothes.").

This goes down as stupidly as you're imagining it does: Batman and Robin escape the trap by using the electrified trapdoor within to ignite the poison gas inside (aren't they also breathing and enveloped by the same gas? Ah, well; best not to think about that too much, or the fact that that is a completely unusable escape method on stage); upon exiting, Batman receives the heads-up from Zelda, and ducks just in time, causing the two gunsels to blow each other away (conveniently offscreen, as they're still inside the sarcophagi; what a way to go!). Eivol Ekdol's escape is cut short by his being cold-cocked with a terribly-thrown Batarang, and Zelda sexily (and tearfully! Taste 'em, Batman; they're real) surrenders herself into custody.

In the coda scene, Bruce Wayne keeps it in his pants long enough to visit Zelda in the penitentiary, where she's rocking horizontal stripes (take that, fashionistas!) from her prison heels all the way to her pillbox hat.

Wayne informs her that, because she acted to save Batman's life, she deserves a break after completing her sentence; so, he's going to set Zelda up for a regular gig at a Gotham Children's Hospital (that's right, kids: before HMOs, there was such a job as Resident Lady Magician at hospitals nationwide).

Next up: The Riddler returns! And BOY does he work hard for a measly one million (USD)!