Wandering all alone is not how I had plan on spending any con, but since Phantom had Ebola someone had to step up and cover this thing. And I certainly tried my best to get the scoop for you guys. I have to admit right now though that I am a bad reporter, and clearly didn't understand what this con was all about. I really did think it was just a general zombie convention. I didn't realize that it was pretty much exclusively about The Walking Dead. My bad. I think not knowing that gave me different expectations than I otherwise would have had. It certainly explained why the celebrity panels were more like a love-in and less like a panel. There were more hugs than insights, but I did find a few really good panels. The best two that I went to had no real stars at all, but they gave me a lot more to think about then how dreamy Norman Reedus may or may not be.

I also did find it completely impossible to get any interviews. Maybe I'm lazy, but it seemed weird to be told that I had to approach celebrities on my own to ask for interviews. I saw the size of the area set up for the Norman Reedus line, and it struck me that I'd be standing in line for a couple of hours only to be told that he didn't have time for an interview. Of course ho doesn't! He's getting $80 for an autograph. Why would he want to hold up his extensive line to talk to me for free? He wouldn't, and you can't really blame him. Not that I could find him to determine this one way or the other. He, Andrew Lincoln, Steven Yeun, and Lauren Cohan all has tables set up, but were nowhere to be seen. 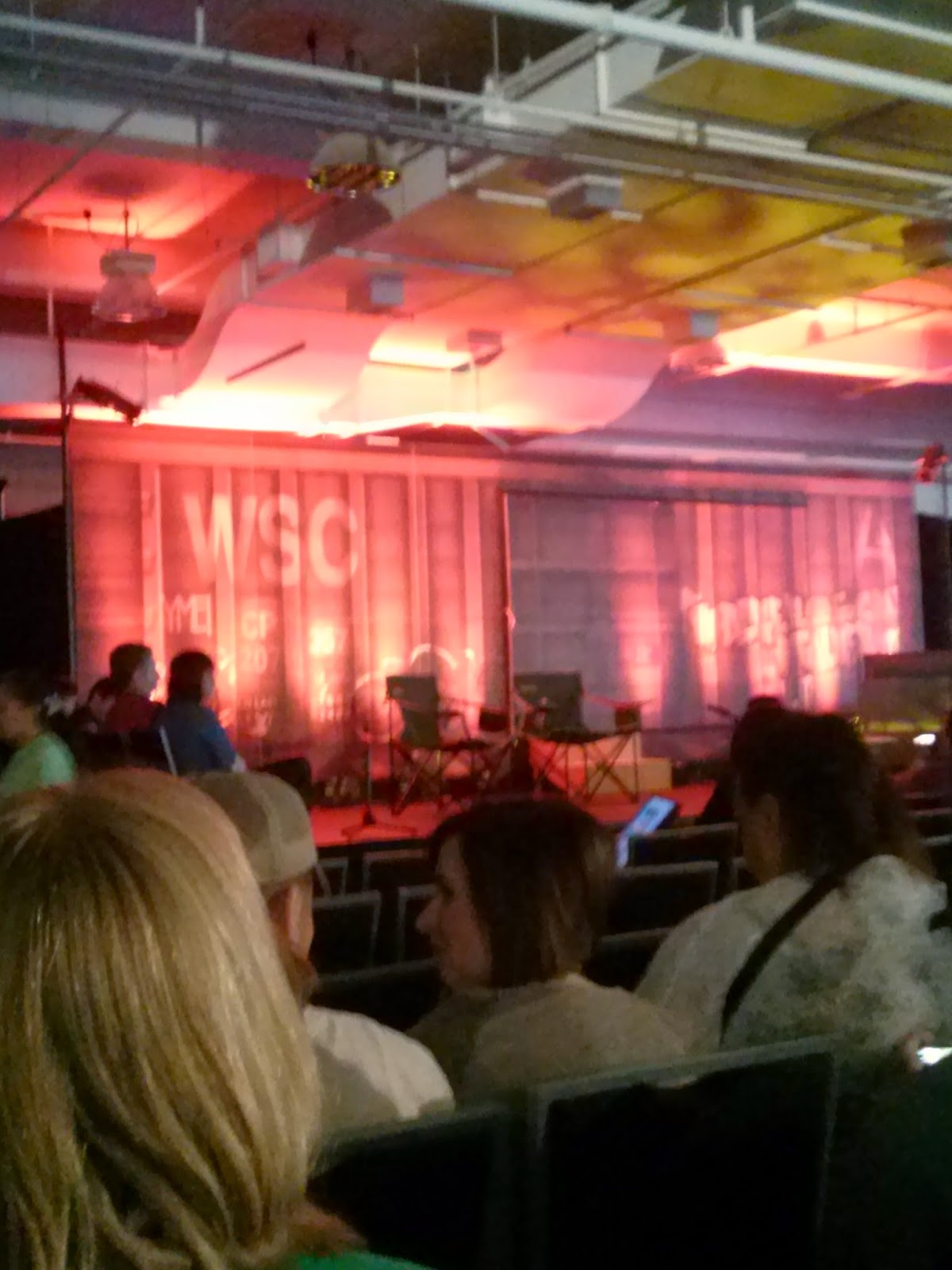 There wasn't a lot on the schedule for Friday, and it was pretty dead if you'll excuse the pun, so I decided to make my way over to the zombie ethics panel. I was a few minutes late so I don't really know who the speakers were, but I believe a few of them were writers. It was a talk about how the images in horror have changed over the years, and how people act and react in the zombie apocalypse. In all media children seem particularly useful because of their adaptability to what normal means. Like the little girl Lizzie from The Walking Dead tv show or the little boy Ben from the comic. Zombies, death, horror, and destruction are their new normal so it isn't difficult for children like that to become what we consider monsters. Their loss of innocence is also much sadder. Another good point was that you don't see animals in The Walking Dead because the zombies have taken the place of animals. We kill animals for food and other uses because we don't consider them as having emotions or higher consciousness. It's the same way we treat zombies. We dehumanize them to make it okay to kill them, but how do we really know what's left of the person inside? Probably nothing, but you don't really want to take the time to stop and find out. At what point do we determine that it's okay to kill a person? How do we know when brain death really occurs and it becomes euthanasia rather than murder? I don't have the answers, but it's something to think about.

Next I was off to the IronE Singleton panel. He seems to be making a pretty good living off of his brief time on The walking Dead. Well, I guess it wasn't super brief, but it felt short because he got sidelined so much of his last season.I wonder if he knew he was doomed the day Tyrese first appeared on the set. Everybody knows there's only room for one cool black guy in a horror movie or show. Yes, Bob is black, but he isn't cool so he doesn't count. This is the part of Q&A panels that I find irritating. People start asking how T-Dog would have responded to situations that took place after his character died. He wasn't a writer, and he wasn't there when any of it happened. At this point he's just a fan like the rest of us, more or less. You might as well plop anybody at the convention up on the stage and ask them how they would respond to a scenario. It's all just speculation that doesn't really lead us anywhere. He did mention that Michael Rooker is crazy though. This is the second or third person I've heard describe him that way, and it kind of makes me okay with not getting to interview him. Then he started plugging his one man show "Blindsided by the Walking Dead". There was to be singing, rapping, spoken word, stand-up, and drama. That all just sounded like a little too much for me so I decided not to shell out for a ticket. He's apparently so focused on this show that he's not auditioning or going out for anything new. He said it was his "mission to inspire people with this show". I wasn't expecting this panel to turn into a southern revival, but it started down that path. People were crying and testifying, and amen-ing up a storm. I know he meant well, and was very sincere in his message, but that wasn't what I came to a zombie convention for. He seemed like a nice enough guy, but I was a bit taken aback by all this. 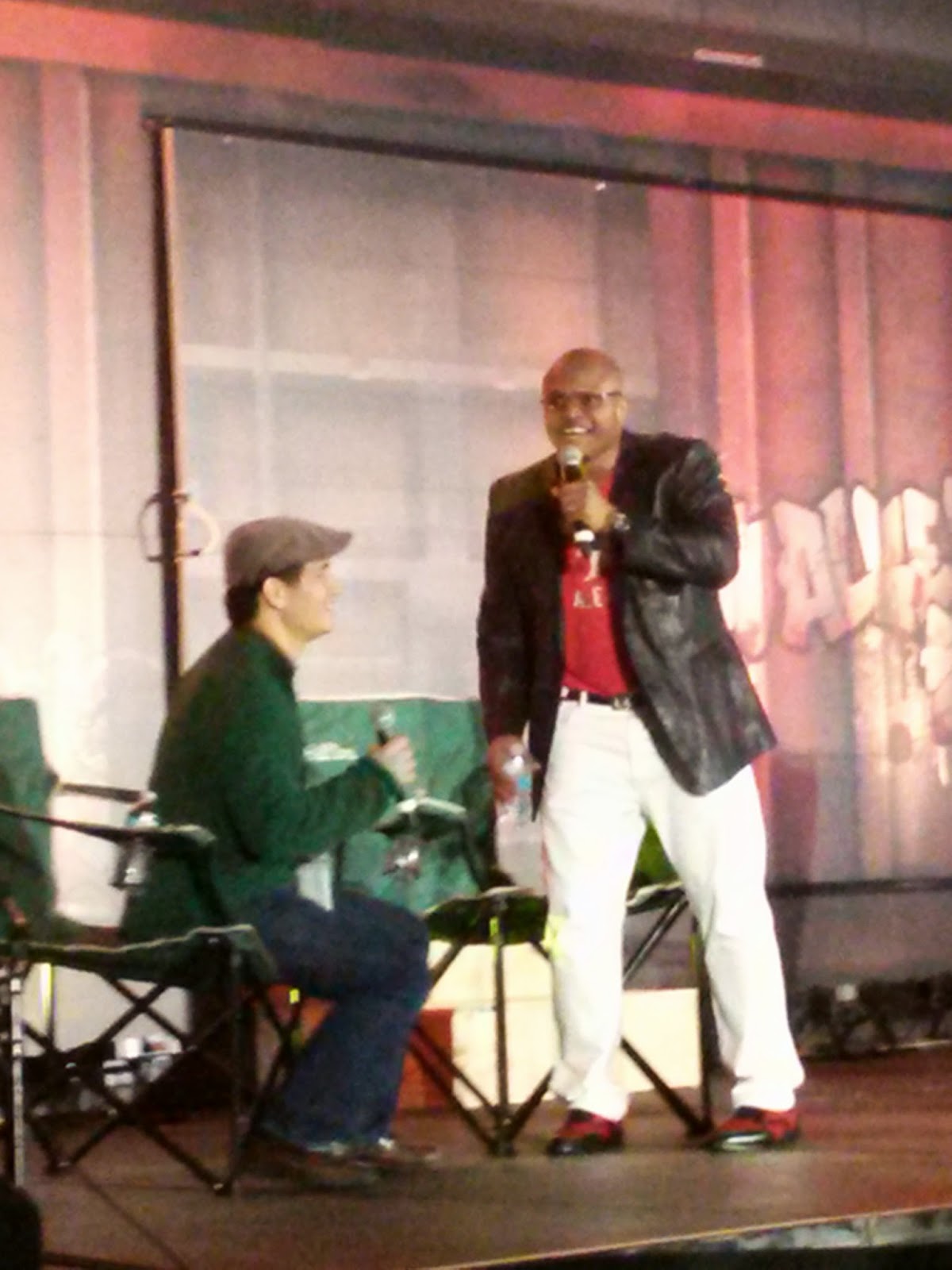 I grabbed a quick snack, and headed of to the Michael Rooker panel which was the last scheduled panel of the day. It was pushed back an hour so I had to kill some time before going back to the main panel room. I didn't really need any Walking Dead merch so I didn't blow any money, but I did find Scott Wilson. Unfortunately I'd received an email that he wasn't doing press so I couldn't approach him as anything other than a fan who wanted to spend some money. There are very few people that I would pay to talk to. I've just never understood the autograph collection thing. I had been tasked by a few co-workers with getting as close to Norman Reedus as possible without getting arrested, but he was still missing. I don't think I get the appeal. He was pretty hot in The Boondock Saints, but he looks so different now. Most of the time I just want him to take a shower, and not for any sexy purpose. He really just looks like he needs it. I'm sure it would be different for all those "if Daryl dies we riot" wearing fans if the writers hadn't gone the whole hooker with a heart of gold route with his character. After another failed attempt at a Reedus sighting it was time to head back to the Rooker panel. The room was packed, and I made the superbly intelligent decision to sit between two men that were taking up a seat and 1/2 each. They kindly left me a seat and 1/2 between them in which I could stretch out a little bit to take notes. And then Rooker got stuck in traffic and couldn't get to us in time to do anything. He was in town working on some undisclosed project, and I guess that he hadn't spent enough time in Atlanta previously to realize that traffic is bad here on a Friday afternoon. So they rescheduled the panel to Sunday. The day I couldn't come. Boo.It wasn't really anyone's fault, but it still sucked. 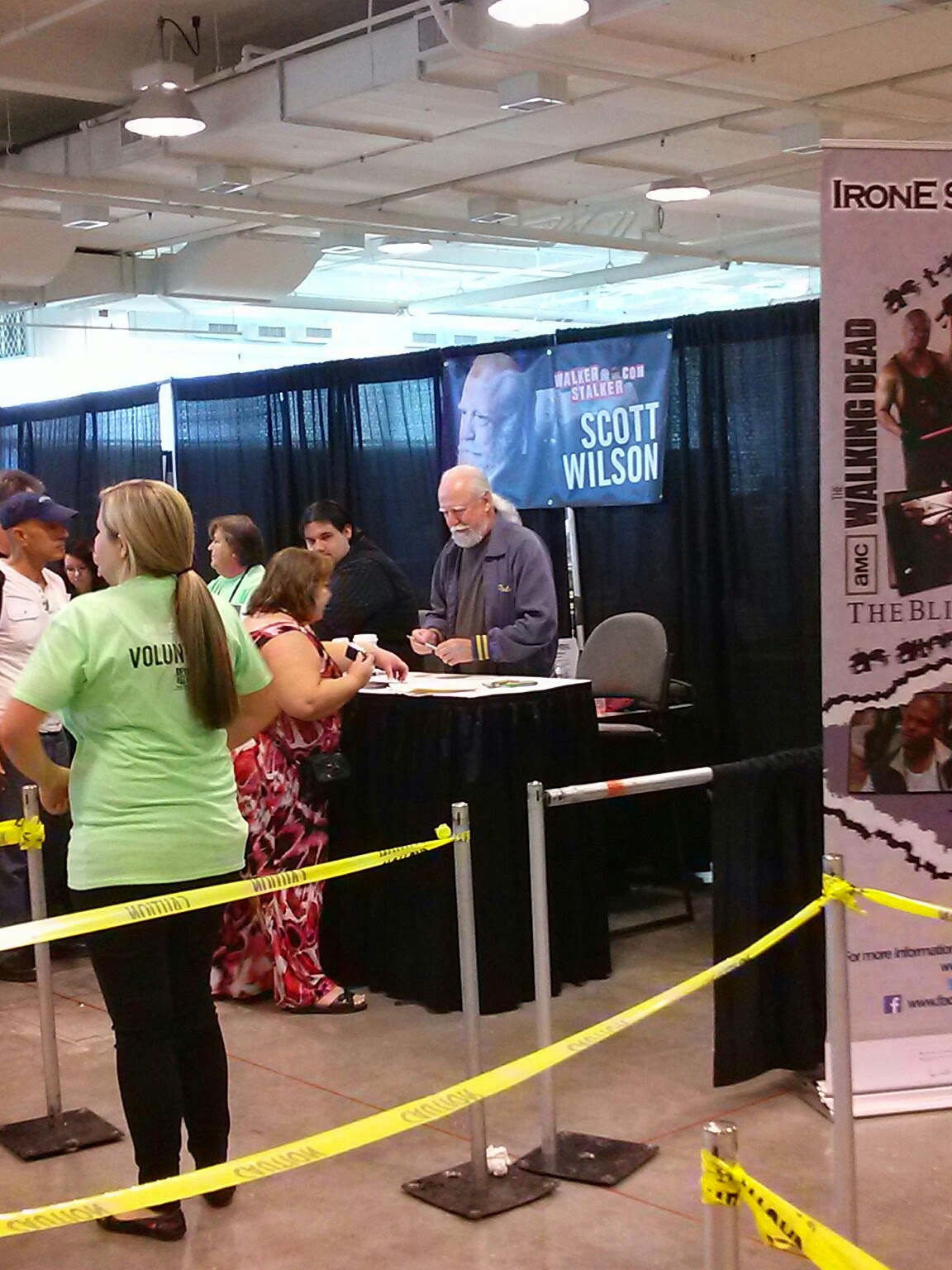 So my day at the con wrapped up at 5:30pm. It's the earliest I've ever left a convention, and it felt very strange. But I had a much fuller schedule on Saturday, and felt sure of some much better celebrity sightings. Tune back in Thursday to hear all about it.