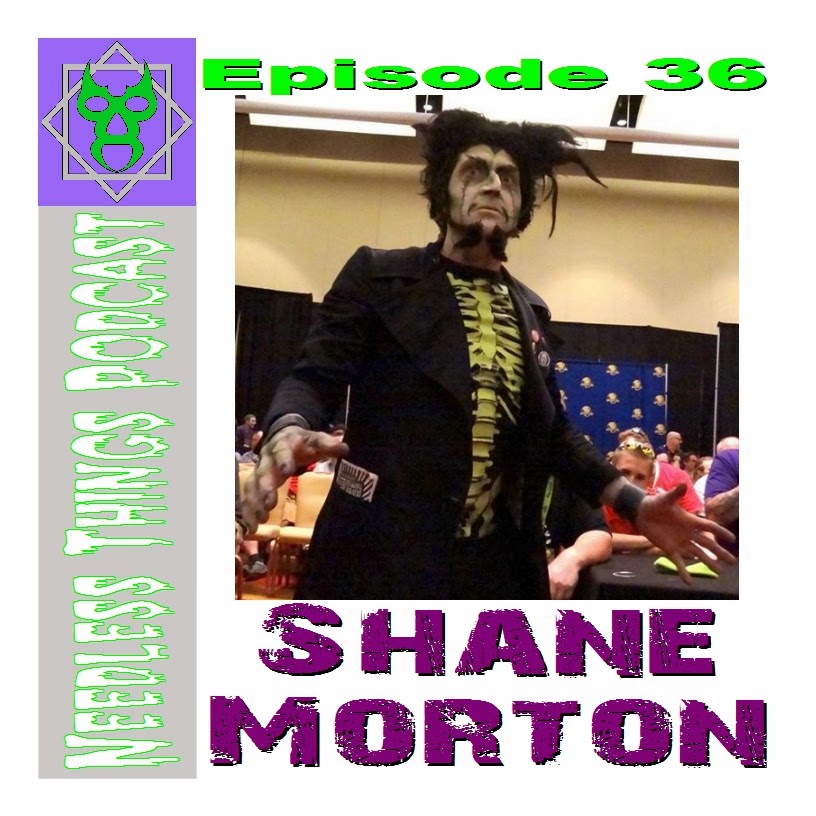 Shane Morton has been a fixture of the Atlanta scene for pretty much all of his adult life. From rock n’ roll to tattooing to haunted attractions, he’s always stayed busy and contributed to many different art forms.

In this episode Phantom Troublemaker traveled out to the Morton homestead to talk about Shane’s many pursuits over the years. He’s rocked in the bands Super X-13 and Gargantua, owned Black Cat Tattoo, and entertained and delighted people from all over the country with the Silver Scream Spookshow and Atlanta Zombie Apocalypse. They also touch on Shane’s world travels and some of the legendary names he’s met and worked with.

So listen in as Phantom and Shane talk tattoos, haunts, and rock n’ roll!

This episode is sponsored by AtlantaZombie Apocalypse. Join us for our final year of creating the most unique and innovative haunted attraction in the Southeast! And be sure to come out for the grand finale on November 1st for the grand return of Atlanta’s own Monster Bash!

It is for this that we thank them and devote far more effort than we should into dissecting what they have to offer.
Oct 17 10:30 AM 31 Days Of Halloween Movie Wes Craven Presents: Dracula II: Ascension
As I mentioned earlier this month, Wes Craven hasn’t always made the best movies. I don’t fault him for this. They can’t all be winners or to my taste or whatever the problem is. But with his own track record being so questionable I am hesitant to put any kind of stock into something he is just presenting. And I’m honestly not even sure what this is part two of.
Okay, I had to look it up, which is something I don’t often do. This is the sequel to Dracula 2000. It and Dracula III were directed by the original film’s director, Patrick Lussier, a protégé of Craven’s. Lussier also directed Drive Angry, which I’ll talk about in a minute.
The point of all this is that maybe I need to give these direct-to-video sequels a chance.

Oct 17 12:30 PM Syfy Original Movie Battledogs
Oct 17 02:30 PM 31 Days Of Halloween Movie Drive Angry
I fucking love this movie. It’s completely batshit insane and nobody but Nicholas Cage could have starred in it. If you haven’t already seen it, DO NOT watch it on Syfy. There’s too much fucked up stuff you’ll miss, including the greatest sex scene ever filmed. Seriously.

Oct 18 09:00 PM Syfy Original Movie Finder's Keepers
I almost skipped this one because I thought I had already made the joke about it being a sequel to Jeepers Creepers. Then I realized that was actually Heebie Jeebies and this is a whole different movie, possibly about the guy that found the Apple guy’s eyeballs and used them for his own nefarious purposes.

I can’t help but notice the apostrophe that wouldn’t normally be there. It’s clever if it isn’t a mistake.

Oh, and this is another pretty good programming choice for Syfy. It’s less than five years old and was fairly well received. Also, I doubt there was much that had to be cut for television.
Oct 19 05:00 PM 31 Days Of Halloween Movie Cirque Du Freak: The Vampire's Assistant
I can’t remember if Syfy has already shown this one this year, but just in case I’ll mention again that I love this movie and am totally bummed that it didn’t do well enough to spawn the planned sequels.
Oct 19 07:00 PM 31 Days Of Halloween Birth
Nicole Kidman believes that a ten year old boy is her reincarnated husband. I AM SURE THAT THIS WON’T GET AT ALL ICKY.

Oct 19 09:00 PM 31 Days Of Halloween Movie Lost Souls
This sounds great! I can’t remember seeing it or even hearing of it. It’s from 2000 and stars Wynona Ryder (Lydia), Ben Chaplin (uh… Brian from The Truth About Cats and Dogs), John Hurt (The War Doctor), and one of my personal favorite actors of all time – Elias Koteas (CASEY JONES)! It’s about a group of people that believe that Satan is going to rip off God’s Jesus plan and I totally want to watch it.

Oct 19 11:00 PM 31 Days Of Halloween Movie Revenant, The
I love the word “revenant”. So much so that I worked it into the wrestler Stryknyn’s introduction – I refer to him as “The Revenant of Rage” because of the Red Lantern tattoo he has. But the word is cool and sinister and any word with “r” and ”v” in it sounds serious. Look – revolver, revolting, revenge, revelation, reverse. Okay, maybe not any word.