I had planned on reviewing the movie Dead Snow 2: Red vs. Dead today, but I was so deeply underwhelmed with it that I just don't have enough to say about it either good or bad. It wasn't good enough for me to talk about how much I liked it, and it wasn't bad enough for me to tear it a new one. Instead I'll be using my time to talk about what is easily the best movie I've seen this month: Detention. See my husband and I always take advantage of the Halloween season by watching as many previously unseen horror movies as we can. We usually start at the top rated Netflix movies and work our way down, and there were several that had 3 or more stars that I added to our viewing list. Detention was the very best of those. It came out in 2011, but I hadn't heard of it before, and imagine it only got what moderate play it did from the fact that it stars and was co-produced by Peeta from the Hunger Games. I know he has a real name, and I don't care. He's Peeta from the Hunger Games forever. If he has to live with it so do you. 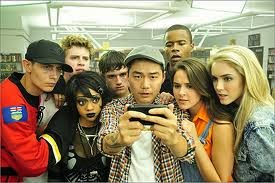 This is a frantic whirlwind of a movie that starts fast, stays fast, and really just does everything fast. If you speed read through this while saying the words aloud or in your head you'll get the idea of just how fast everything happens. It isn't always sure what it wants to be. It's part horror, part comedy, part sci-fi time travel movie. It bounces back and forth between all of these things with the relentless pace only those who have grown up with MTV can possibly keep up with. And there are a lot of 90's references because apparently "the 90's are the new 80's". It begins with a very Heathers style bitchy girl talking bitchily through a graphic laden montage, but the segment ends with her throat slashed by a serial killer who pops up throughout. Then we jump cut over to Riley who is 2nd in loser-dom only to the girl who blew the stuffed bear that acts as their high school mascot. She's clumsy, awkward, and her dad is still too drunk to drive her to school in the morning. Then just as quickly we're on to a clever title scene that serves to introduce us to the rest of the school. There's Peeta, the girl from Resident Evil 3 and 4, Wallace from Veronica Mars (who surely must have had a bigger part at some point), and Dane Cook. This is the least I've minded him in a long time. If he'll promise to remain like this I'll allow him to come back. 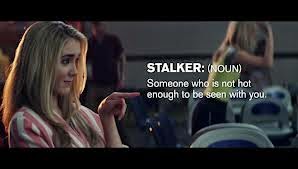 So Riley and her former friend Ione are both hot for Peeta, but there's a serial killer on the loose who's imitating a movie within the movie called CinderHella. Peeta is in danger of not graduating, and the girls are in danger of getting murdered. Oh yeah, and then it becomes a sci-fi alien 50's monster movie for a minute because the star of the football team touched a space pod when he was little and became part fly. But that only matters for a few scenes, and then we forget all about it after the killer shows up to take him out. But more pressing than the rampaging murderer is the fact that Riley's boob gets caught on tape at a party and goes viral causing Principal Dane Cook to give everyone detention to teach them a lesson. It is, of course done in exact Breakfast Club fashion with the typical cast of oddball characters. I kept expecting Dane Cook to say something about messing with the bull and getting the horns. While in detention we get into a Freaky Friday thing with Ione and her mom Sloan. Ione wants to win the school dance contest, and her mom knows how to dance to C&C Music Factory so aliens show up and send Ione's mind back to 1992 while Sloan's teenage self takes her daughter's body. Yeah, this part doesn't make any sense to me either. But then we're back to the present and people in detention start dying so the kids try to solve the crime by watching CinderHella leading to a movie within a movie within a movie within Inception. I lost track of where I was for a minute when Ron Jeremy showed up. But it seems that the world is going to end because of this whole time travel thing, and then they have to stop that as well as the killer. To go back and stop the end of the world they have to use the time machine that the Asian kid built from the stuffed bear (who is a perfect time conductor having been brought to earth by aliens). So Riley and Peeta go back help the nerdy young Dane Cook get a date, get Peeta some good grades so he can graduate, and foil the killer all at the same time. Then they are both magically transported back to the present where prom is going on, and everything seems to be okay. Except that they haven't stopped the killer yet, and there's still the climactic confrontation scene to come. I won't spoil the ending, but I'm sure you'll be surprised by the twist at the end. 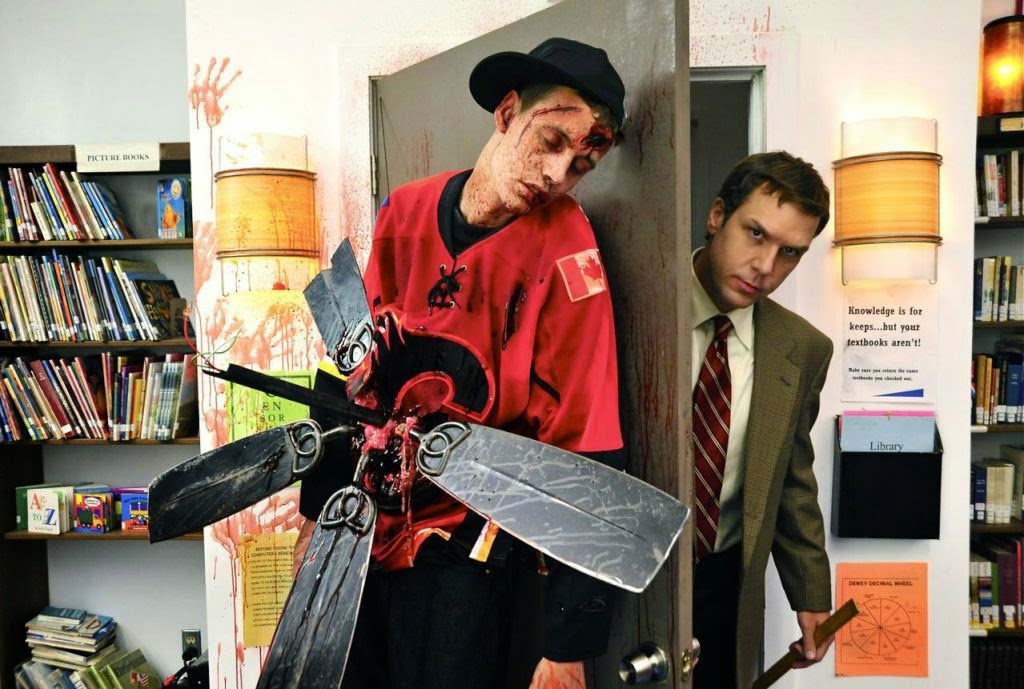 While not scary at all this movie is frenetic and zany enough to be entertaining, and it had a lot of humor as well as some decent gore. Who knew that I'd actually like Peeta when he wasn't being Peeta. Maybe like is a strong word, but I did un-hate him after this. I certainly didn't think it would remain as funny as it did for as long as it did. I kept waiting for it to get old or annoying or simply stupid, but it never did. The reviews weren't great so obviously not everyone could deal with it's identity confusion or it's pace, but it was the best horror movie I've seen so far this month. We've still got a few days to go before it's over so you never know. Unless my sneaky copy of Left Behind gets here in the next few days, and turns out to be everything I want it to be (can you imagine the sheer terror of everyone getting raptured and leaving you with only Nicholas Cage?), Detention will probably remain the winner.

Hey Lake Placid is on again in case you missed it the first time. There's also the "meh" remake of Friday the 13th. The good stuff comes later when you've got Tremors, Pumpkinhead, and Halloween II all in a row. After that it's Halloween III:Season of the Witch, and I'll probably watch it. I only remember seeing it once when I was a kid, and was so confused and infuriated that I don't remember it fondly. I was going to give it another chance to see why everyone can't stop talking about it suddenly.