31 Days of Halloween - The Horror Of Rob Zombie By R.T. Ewell 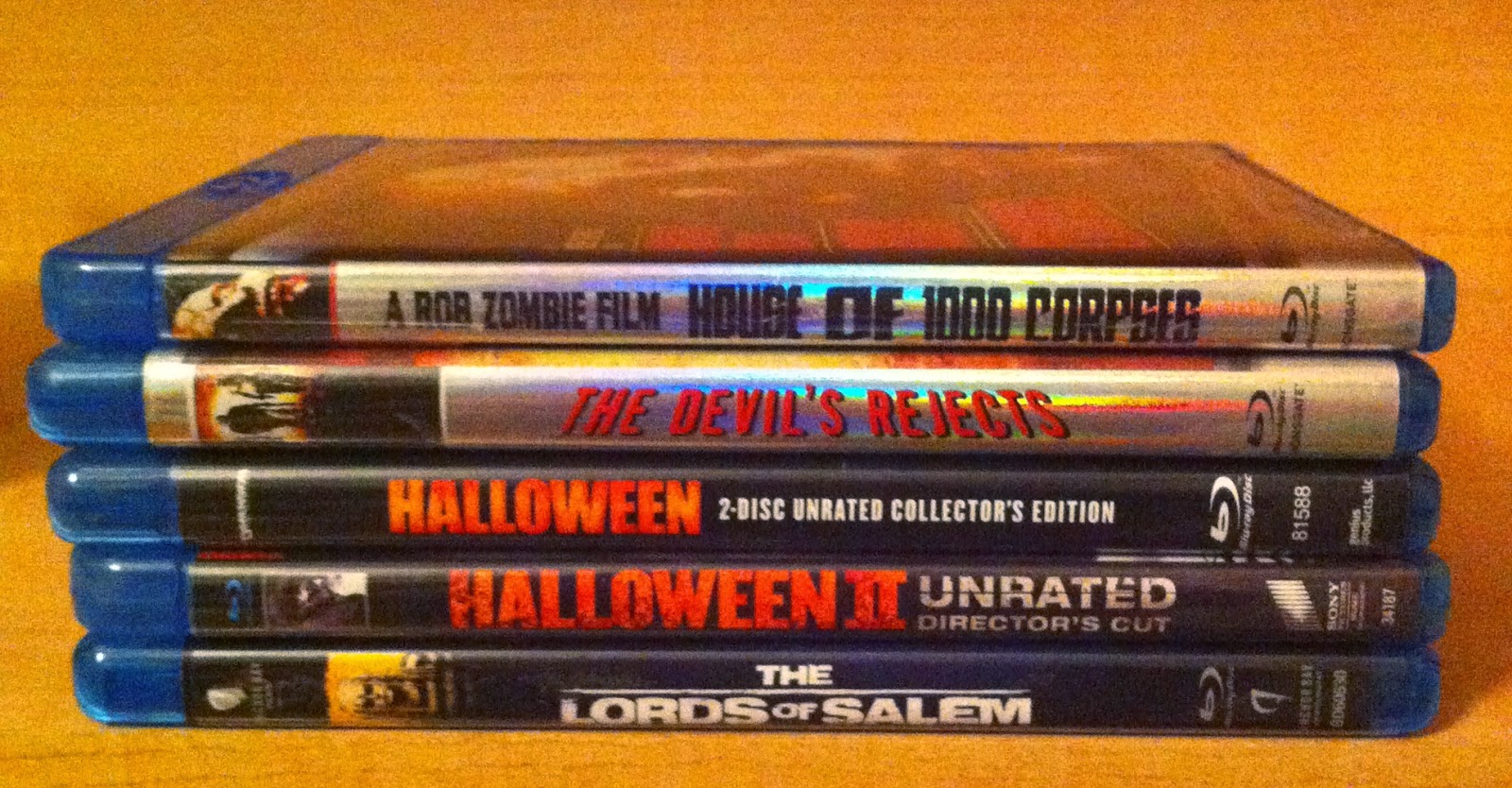 I was a pretty big fan of White Zombie in the 90's which of course was led by lead singer Rob Zombie. Their hit More Human Than Human was played more times than I could count. It's also one that I still consider a kick ass song. If I want to get fired up, than thats the one that I want to penetrate my ears. In the late 90's I remember hearing rumblings of Zombie wanting to pursue a career in film with a horror movie that he had written. I can't remember the exact timeline of when he started to film, when he finished the film, and when the film was released but I know it was years between each other with a hint of controversy.


Eventually, House Of 1,000 Corpses was released in 2003. I vaguely remember it coming to a theater in a nearby city but I missed my chance to see it on the big screen. So when it was released on DVD, it was one I was excited to see. Well, if I'm being honest, when I first saw the film I wasn't sure what to think. It was unlike anything I had ever seen, which isn't necessarily a bad thing. I enjoyed the characters both the victims (one of which was Chris Hardwick while the other was Rainn Wilson of Office fame) and what we would come to know as the Firefly family. The look of the film was fantastic but something over all didn't grab me. I saw it a few times after that and my opinion of it kept getting better. Than something came about that changed my mind completely. The Devils Rejects.

Rob Zombie's first film House Of 1,000 Corpses was a success but mostly due to the controversy surrounding the movie. It did good enough to warrant a sequel two years later in 2005 that was entitled The Devil's Rejects. I was fortunate enough to be at San Diego Comic Con that year where The Devils Rejects had a pretty good presence. Suddenly, my excitement for the sequel was extremely high. It had a different look than the first movie while looking to be a throw back to horror movies of the seventies. From the moment I saw the movie, I was in love. Everything about that movie I absolutely 100% adore. Like a cuddly teddy bear, I would snuggle up to it if I could.

It's brutality, violence, gritty, and comedic look at horror is something that few, if any, movies do. Bill Moseley's performance as Otis is so drastically different than the first movie which is a good thing. Gone is the face paint only to be replaced by a beard and stringy long hair. Sherri Moon Zombie's performance as Baby is simply brilliant being both sexy and extremely brutal at the same time. And of course Sid Haig rounds out the group as everyone's favorite clown, Captain Spaulding. There are many other factors that make the movie fantastic while making it something special. To this day, it would easily make my top ten of all time favorites.

I still remember sitting in the theater watching Rodriguez & Tarantino’s 2007 film Grindhouse, when long and behold one of the fake trailers was done by Mr. Rob Zombie himself. Werewolf Women Of The S.S. was a perfect addition to the campiness that encompassed that film. Although, no full length movie was ever done, maybe one day that will change.

2007 would see the release of yet another release of Zombie's, one that surprised even me. Yes, it was Rob Zombie's remake of the classic Halloween. Now, prepare yourself for this, I saw Zombie's version before I saw John Carpenter's. I know, I know, blasphemy. Carpenter's version was just one of those that had escaped my viewing eyes. Anyway, I knew the general story but I went into Zombie's version as a Michael Myers virgin. Since then I have seen both and I think what Zombie did to that movie is the perfect example of what a remake should be. It took the main concept and turned it on it's head. The choice to show Myers as a child was brilliant and is some of the most brutal scenes of the entire movie. The film is certainly controversial and most people don't share my opinion but Zombie was brave enough to take on the horror classic. Hey, horror remakes are usually way worse than this one, so be thankful.

2009 was sort of looked at as a misstep for Mr. Zombie but I disagree. Halloween 2 is not as bad as everyone made it out to be. I thought it was an interesting direction to go with the series and I still wish he got the opportunity to finish out the trilogy by doing a third one. I have heard that the directors cut solves some of the problems that people have with the movie. I have yet to see that version even though I own it.

The other movie that didn't have much success was The Haunted World Of El Superbeasto which more than likely you have never heard of. It's an adult animated feature that never gained much buzz. I have seen it one time and I remember enjoying it but not enough to catch it a second time. If you like nudity, over the top violence, cartoons, and Rob Zombie than you may want to check it out.

After those two movies, Zombie did not have another release until 2013. It was confirmed that he was doing a Salem witch movie called Lords of Salem. There was a lot of excitement surrounding this one unfortunately it was greeted with not so warm and fuzzy feelings. My thoughts have changed over my multiple viewings of seeing it. Overall, I like it. There are parts I love and parts I hate so I think that counts as a like. It's kind of an artsy movie and I think thats where it loses people. I recommend people read the novel that was released around the same time. It was based on the original script that Zombie had and not the final version so it reads much less artsy. I read the book first and this could have affected my thoughts on the movie.

I have heard over the years that Rob Zombie was going to tackle a non horror related project called Broad Street Bullies based on the Philadelphia Flyers but I don't think that is in development anymore.

Not knowing what his next project was going to be, fans were wondering if he would go back to horror. Or if the fan's reaction to Lords Of Salem had made him second guessing a horror movie. That is until he led people to a teaser trailer of his newest project. It was basically a teaser trailer doing an overview of Zombie's past movies. However, at the end, a image of a clown was revealed along with the title. 31. Speculation ran rapid that it was an image of Captain Spaulding but Zombie has already said that it was not related to previous characters. It was going to be an all new horror filled story.

I love the fact that Rob Zombie got into film making. As much as I love his music, his movies have really struck a cord with me. They are brutal, in your face, and unrelenting. This is my opinion as I have ran across people that don't much care for them. Which is fine because everything is not for everybody. I always tell people to give his movies a chance but if they are not for you than there are plenty of horror movies out there that will be right up you alley. But if you want something different mixed in with your horror than Mr. Zombie's movies might just be for you.