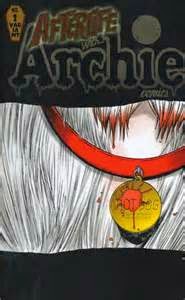 When I was growing up, most of my friends liked the superheroes like Spiderman, Superman, and Batman. I like those characters as well but more when I was a teenager. When I was young, let's say, under ten it wasn't a superhero that I looked up to or enjoyed to read. It was this normal, everyday guy named Archie Andrews.


Every now and then when my mom dragged me along with her to go grocery shopping I would talk her into buying me a non food related item. Almost every time I strategically waited till we got to the check out lane. Because sitting there waiting for me was typically the newest Archie Digest. I always had one of those little books in the car ready to read while my mom drove around town. Nighttime may have stopped some kids from reading but not me. I always had a flashlight so I could read in the dark.

There was even an Archie made for TV movie which I loved. It was called Return To Riverdale and focused on the gang at there ten year reunion. I haven't seen it in a really long time but as a kid, I loved it. For the simple fact it was the only live action Archie movie. It still has that honor which kind of amazes me. Christopher Rich played the title role of Archie and to this day whenever I see him in a show or movie my childhood comes flooding back every time.

In my adult life, Im not gonna lie, I don't read Archie that much. On occasion I will pick up a digest and read through it hoping to bring some of that magic back. I still enjoy them but must admit its not the same mainly due to being an adult. Believe it or not, Archie is still very relevant these days by creating “water cooler” type news. Whether its adding a gay character or even have Archie marry both Veronica and Betty (in separate universes, mind you) the company is very focused on making headlines. In summer of 2014 they made a bold move that was quite shocking but got leaked to the media a few months before it actually happened. I won't spoil it just in case you haven't heard it but I promise I have mixed feelings on the decision.

In all of these headline making news items, one caught my attention. Archie was going to hop aboard the zombie money train that has been running the tracks lately. Thats right, Afterlife With Archie (which is a play on the normally titled Life With Archie) was indeed going to grace the comic book shelves. At first I scoffed at the idea thinking that there wasn't going to be much thought given to the title. Boy, was I wrong. When I first started seeing images before it hit the stands I knew this was going to be something special.

From doing research, what help to get this comic the green light was a variant cover done by Francesco Francavilla which inspired this whole series. 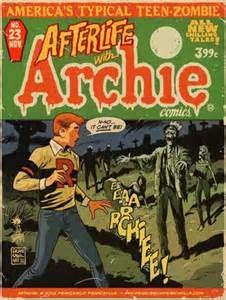 Francavilla's artwork is absolutely stunning. I don't know what else to say. The artwork seriously speaks for its. From the first issue it is easy to tell that this is not a comic designed for kids. People die. Lots of beloved characters die, turn into zombies, and then eat other beloved characters. The artwork does not hold back either. There are times where it is down right nasty as you see these once innocent characters feasting on each other. The art is a great blend, making it feel modern while also having a B fifties horror movie vibe at the same time. It really is the show piece of the entire book. 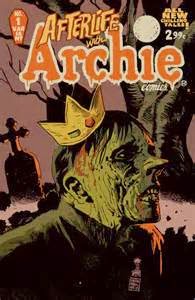 That's not to say that Roberto Aguirre-Sacasa's writing is bad because its absolutely is not. In fact what makes this story work is the fact that Aguirre-Sacasa understands the Archie universe. The story is a simple but effective one. Hot Dog, which is Jughead's beloved dog, is killed. Devastated by this, Jughead finds a way to bring him back but as the story goes Hot Dog is not his old self. Eventually, Hot Dog and others spread the zombie virus throughout Riverdale and it does not hold back. As the story goes on, you really get a sense of who the characters are more than ever before. In fact, there is a brilliant flashback that involves Veronica's parents that I will not spoil but longtime fans will go nuts for it.

I would have never thought that this story would have worked. It's a well crafted story that doesn't just make them zombies for the sake of being zombies. This is what happens when you get people that care about a franchise. They find a way to make it work, they love on it so hard that there is no chance of it being bad. I wish more companies would take note of this and hire people that actually wanted a project to be successful for the long term. This was Volume One of the trade paperback which collects issues 1-5 of the ongoing series. Escape From Riverdale was the name of this story arc which ended with me begging for another issue.

If you have any doubts about reading this series, don't. It's so much fun, even if you were never a big Archie fan you will still enjoy it. I can't wait to see the development of these characters and where the story goes from here. It has potential for the scope of this book to get really big if they decide to take it that way. If you are looking for something to read this Halloween season than this is the perfect addition to your reading pile. I know that it's going to be a Halloween tradition for yours truly from here on out.