As our loyal readers know we have recently become an official reviewer for Zenescope Comics. This means that we receive PDF copies of everything that they release. Obviously I can’t personally review everything that they release, but as long as I hit a certain number each quarter they’re cool with it. I’m bringing another regular writer on board to help with that, so we’ll be putting them up a bit more frequently than that.

So far I have enjoyed what I’ve been reading from Zenescope. Grimm Fairy Tales is a pretty cool concept and has been fun so far, as have Grimm Fairy Tales vs. Wonderland and Masumi: Blades of Sin.
But my favorite by far of all of the titles I’ve received has been Grimm Tales of Terror. It’s a horror anthology series in the vein of the classic EC comics. While this is a fun and well-loved format, it’s one that has been around for decades. The best and most talented writers, artists, directors, and actors have left their mark and I would imagine it’s tough to come with new and entertaining ideas.

Fortunately, Zenescope has been able to freshen things up enough to publish four successful comics (so far). There are familiar tropes – because what aren’t at this point? – but with enough originality to keep things interesting.

Each issue opens with a Crypt Keeper-like character that bookends the main narrative. This being Zenescope, the character is a hot redhead rather than a desiccated living corpse. She goes unnamed, but judging from her actions and the cover images she is sort of an avatar of death. Or maybe Death herself.

Red interacts with characters outside of the central story, sometimes telling the story herself and sometimes simply passing through somebody’s life (usually at the very end of said individual’s life). 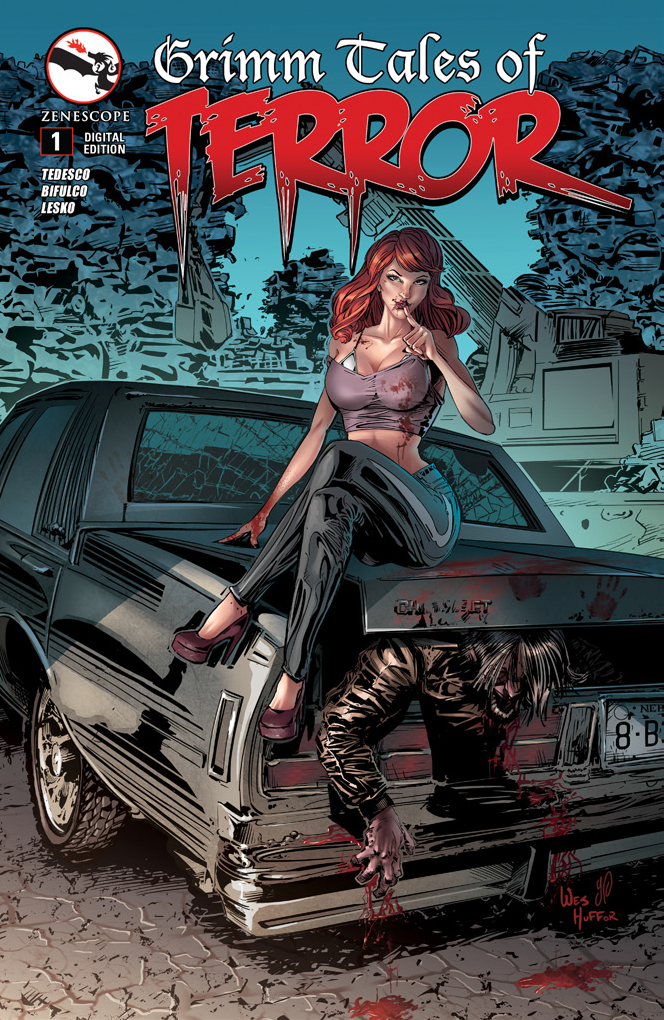 The first issue is written by Ralph Tedesco with artwork by Antonio Bifulco. In this story – “The Tales We Tell” - a young wife’s husband takes ill, and the events that follow lead to her incarceration in a correctional facility for the criminally insane. But there’s much more than just that and there are sinister forces gathering around her. 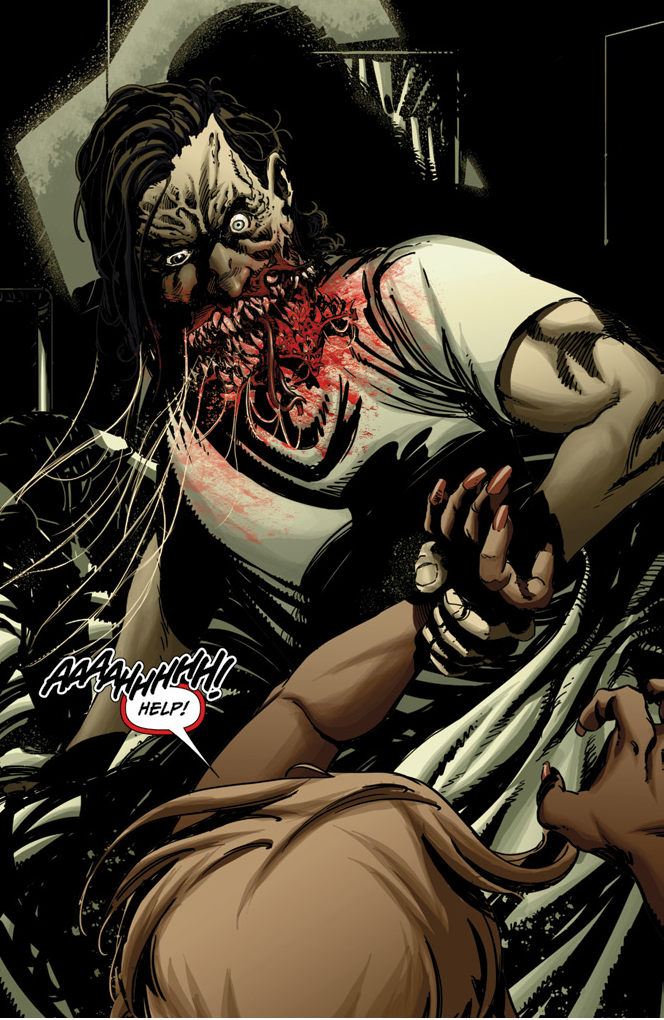 The art in this one is particularly strong and evokes that classic horror feel. The flashback scenes as the wife is talking to the psychiatrist are muted and washed out. This creates a very cool effect and is a visual way to explain the sequence of the story. The scenes in the present are vivid and at one point almost overly garish and it has a great effect. One of Zenescope’s strong points seems to be visual presentation. The penultimate page of the book is a fantastic, shocking piece of horror art. 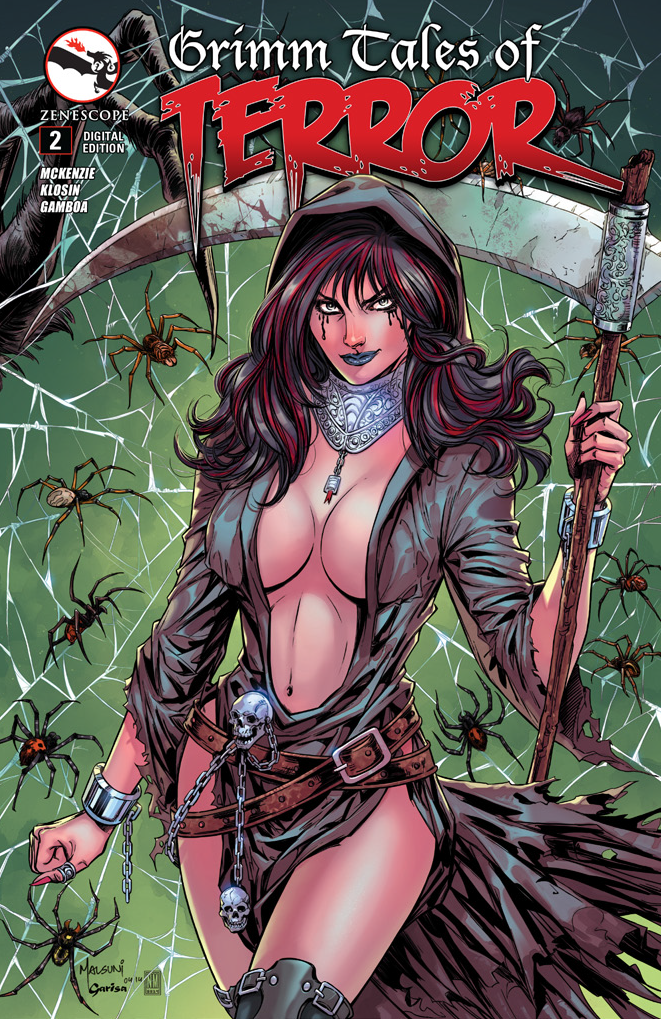 The second issue features a story called “Web of Deceit”. It was clearly about spiders, which made me massively uncomfortable. I mean, they’re not aliens or anything, but I am not a fan of spiders. And don’t give me your stupid spider memes about how they eat flies and are innocent creatures with families. They’re tiny monsters and they’re gross. If you like spiders, send me your address and I’ll ship you all of ours. You’re welcome to them.

Anyway, the story is by Joe Brusha, Ralph Tedesco, and Shane McKenzie with artwork by Przemyslaw Klosin, which is a heck of a handle. I find the presence of three storytellers interesting, but I imagine a bunch of people sitting around the Zenescope offices pitching ideas around, which is a concept I really like for this sort of thing. Can’t you just imagine you and your buddies sitting around coming up with ideas for cool horror stories?

This isn’t quite the spider story I was expecting and it shows that Tales of Terror is just as worldly and grand in scope as the best horror anthologies. This tale involves two brothers whose father has gone missing in pursuit of an ancient artifact. The father’s benefactor has summoned the brothers to complete the quest. Which involves spiders. 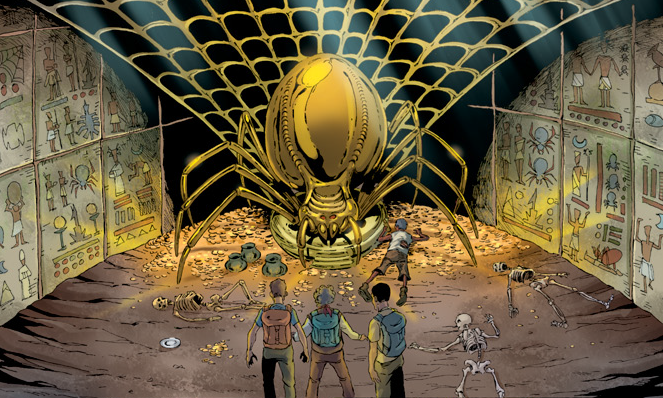 The art is, once again, reminiscent of classics horror comics. The one glaring issue I have is that one of the brothers looks to be the same age as – if not older than – the father. The point was to make this brother the older brother, but he’s too old looking. It isn’t a huge deal and doesn’t hamper the otherwise excellent story, but it’s odd and definitely noticeable.

The last few pages of this issue are chock full of nightmarish imagery. Even if you’re one of those spider-loving weirdos, I guarantee there are things here that will creep you out. Nobody wants to deal with the sort of crazy shit that happens in this one. 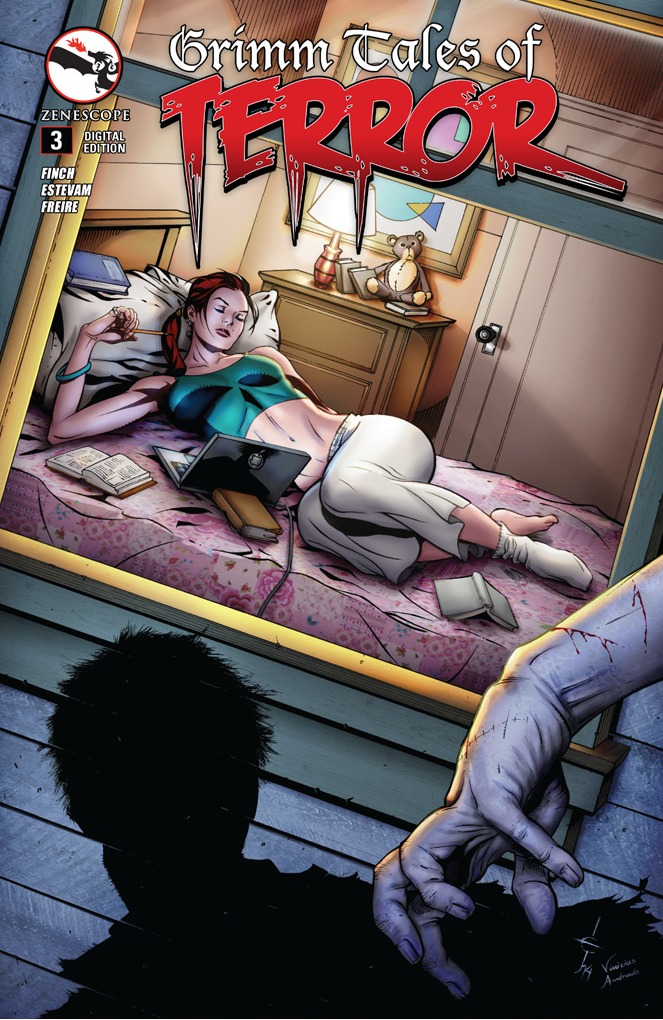 The tale in issue three is called “Don’t Turn On the Lights”. It’s by Joe Brusha and Ralph Tedesco and written by Meredith Finch. Milton Estevam provides the artwork, which is somehow cleaner and more comic strip-like, but works quite well for the story. Especially once things start to go bad. The gore and violence that pops up in this one are jarring amidst the bright, almost romance comic type artwork. It’s a wonderful contrast. 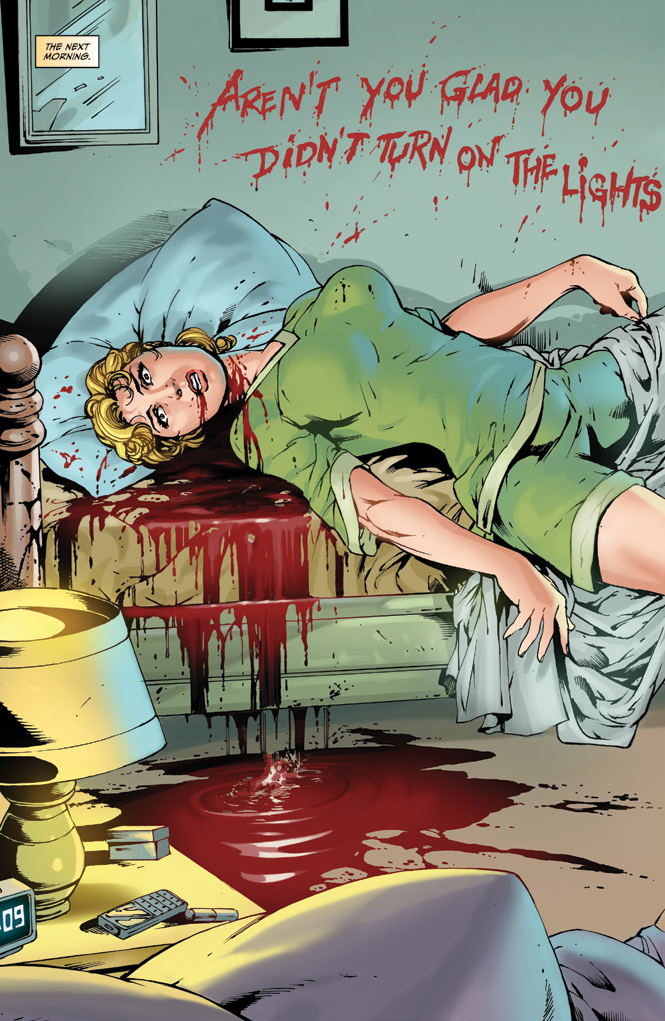 I like the wraparound in this one, as it’s kind of a classic college scenario with a satisfying conclusion. The main story initially appears to be a simple retelling of an old urban legend, but it has a satisfying difference from the source material. I love it when it appears that something is concluding but there’s more story to be told. 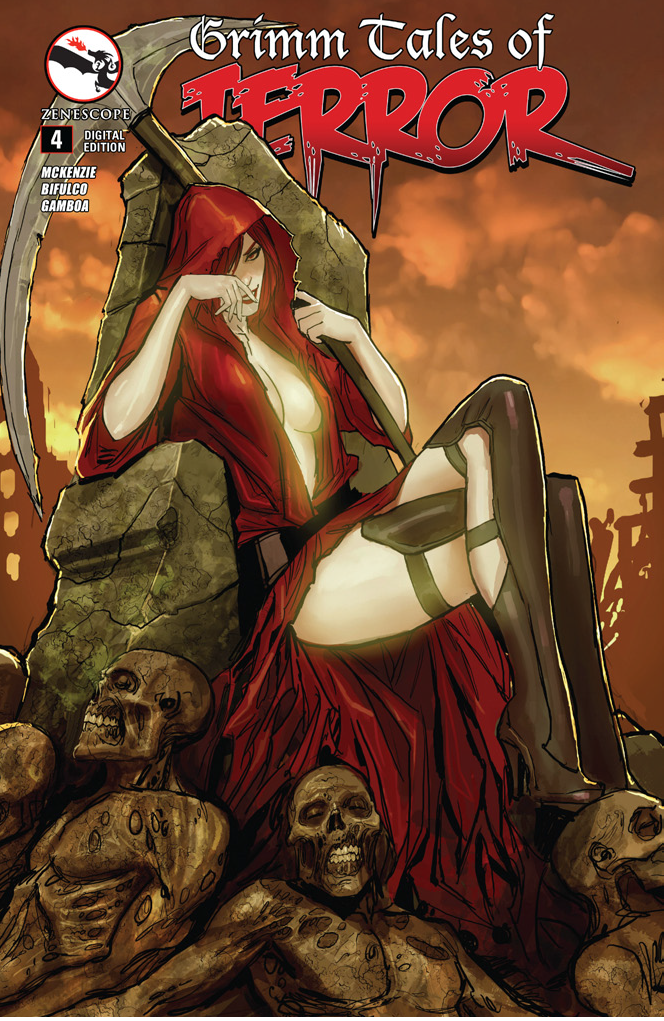 The fourth issue is called “Red World” and once again demonstrates the wide range of story possibilities that Zenescope is willing to pursue. This one takes place on an Earth where plague has wiped out a massive portion of the population. It’s equal parts Twilight Zone and Tales From the Crypt. It’s the most impressive of the books by far and did something I haven’t had a comic book do in quite some time – it shocked me. Several times. And surprised me, as well. I’ve enjoyed each issue of Grimm’s Tales of Terror so far, but this one was one of those stories that you just visualize being adapted. It’s very cinematic and powerful.

We have the now-familiar story team of Joe Brusha, Ralph Tedesco, and Shane McKenzie. Seeing these names again convinces me that the scenario I came up with above – people sitting around and hashing stories out together – is pretty likely. The artwork is by Antonio Bifulco and returns to the series’ more standard EC-inspired style. It’s fitting, as this story is pretty unrelenting and presents horror after horror. 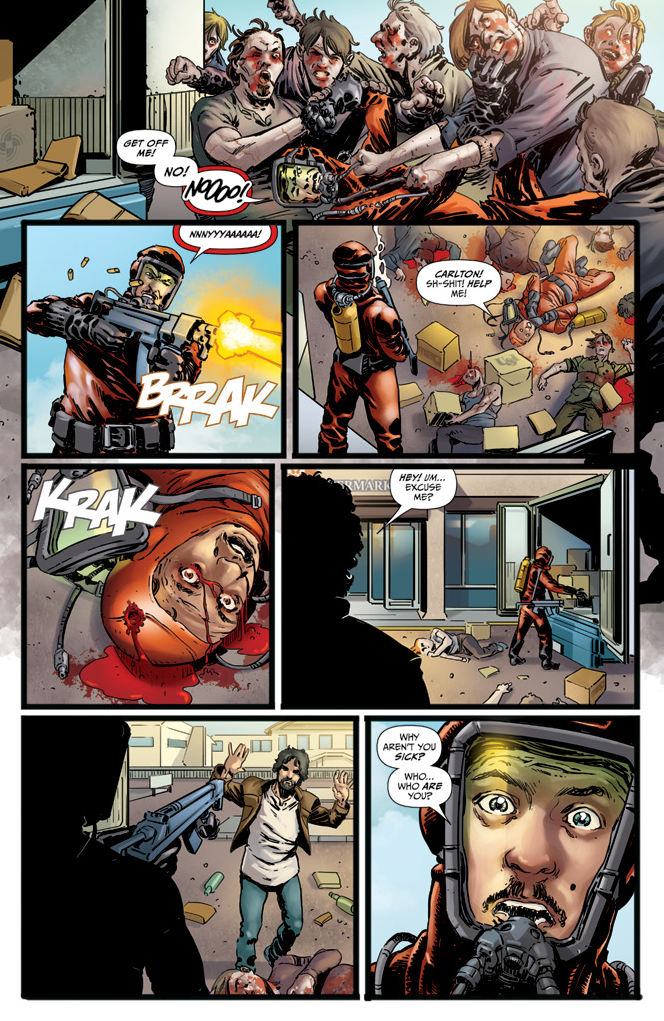 Little time is spent on exposition or setup. All you need to know is that humanity has been decimated by a virulent… er, virus. And it’s everywhere and basically inescapable. The protagonist is immune and has to make his way through this nightmarish new world. We see just a tiny slice of this reality, but it’s more than enough to terrify.

I’m digging Grimm Tales of Terror. It’s been a solid series so far and I definitely recommend you pick up at least the most recent issue - #4 – next time you visit your local comic shop. All four of the currently released issues are very good and will enhance your Halloween season, but that fourth one is a real punch to the guts.

It is for this that we thank them and devote far more effort than we should into dissecting what they have to offer.

Since SyFy has seen fit to provide us a with a full day of the silly nonsense that is Ghost Hunters, I am going to once again crank up the Phantomatic 6000 Story Generator and throw some better ideas out based on the Ghost Hunter episode titles. Well, different ideas.

This is the story of how Nikolai Tesla used science to explore a whole new realm of the unknown – the netherworld! Tesla and his team of researchers willingly turn themselves into the first actual ghosts so that they can investigate the mysterious dimension just beyond our own.

Jonathan Taylor-Thomas stars as college student Dex Ripley, who dies in a wacky wakeboarding accident just a few weeks before graduating. Now Dex is a ghost, but can he still graduate? And more importantly, get laid?

Jessie Williams is expecting her first baby, only to discover that her child is destined to become the personification of Death. Now she’s in a race against time and across the world to try and find a way to avert this grim future.

Hulk Hogan narrates a trilogy of terrifying tales from the world of professional wrestling.

Michael Paré stars as a Navy SEAL that died in the line of duty. Now, thanks to a chaplain that is secretly a voodoo priest, the soldier continues carrying out assignments from the beyond.
Oct 15 04:00 PM Ghost Hunters, Season 9 Prescription For Fear

Edward Callahan is a pharmacist with a dark secret – he is the man who originally developed crack cocaine for the US government’s experiments with population control. Now his secret is in danger of being revealed to the world by a group of social activists. Can Edward protect his family and his identity with only his vast knowledge of chemistry and pharmaceuticals? And will he end up developing something even more insidious and terrible than crack and unleashing it on the world?

Mary can’t stand her husband Ted’s parents. But when they both die while visiting for the weekend, they end up as ghosts in Mary and Ted’s house!
Oct 15 06:00 PM Ghost Hunters, Season 9 All Ghosts On Deck

David Spade and Rob Schneider star in this screwball comedy about two garbage men trying to get to Jamaica that accidentally stow away on a ghost ship!

Earth faces an alien invasion and the only hope lies with the reanimated corpses of Grover Cleveland, James K. Polk, Franklin Pierce, and Calvin Coolidge!

This one is just too direct. An army guy falls in love with a ghost. I dunno.

Aldred Pearce defied the Elder Gods over two hundred years ago. As a result, nine generations of Pearce family men have carried a dark curse. Can Aldred’s descendant, Willem, break this long line of suffering or will he bring about the End of Days?

I think this is the show about the professional pumpkin carvers. If so, I recommend it. It’s fascinating. Overly scripted, but interesting when it focuses on the craft.

This actually sounds like a really good movie. It’s based around Lilith, the first woman created by God, who rejected Adam. It’s complicated, but she ends up being tasked with saving the world from a demon.

I feel bad that I haven’t watched this show yet because it looks fun and I want to be able to tell you guys about it. But I will say this – “Zombie Karate” is an incredible title for an episode.

Oct 16 09:30 AM Syfy Original Movie Reign Of The Gargoyles

Nazis controlling gargoyles via the Spear of Destiny. This sound concept is killed by terrible CGI, which is what happens with a lot of SyFy Original movies. I simply cannot look at CGI this shitty. Old WCW pay-per-views had better graphics.