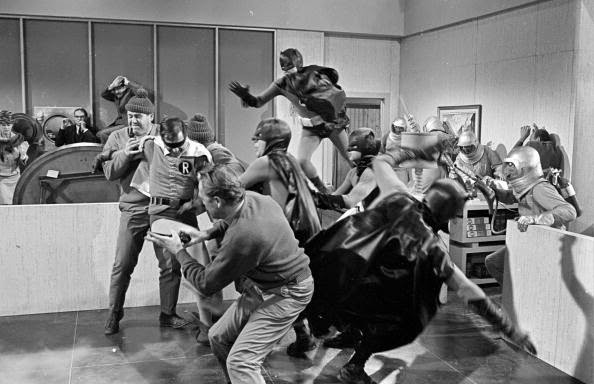 Aw, shit, y'all! You have no idea how long I've been saving up "freeze" and "cold" puns. Tonight, we dine in (frozen) HELL!

Skating patron #2: "With a flamethrower, yet!"

Motorcycle cop: "What? All our flame throwers are supposed to be setting fire to villages in Vietnam! We'll just see about THIS."


What follows is the most realistic car chase scene in the entire series thus far. And how does it end? Why, with Mr. Freeze icing up the road surface, of course (squee!), causing the pursuing cop to lay down his bike in a manner MOST unimpressive.

Commissioner, why do you even bother with the glass dish cover over the Hotline phone? You KNOW you're gonna end up calling him; you can't stop yourself. Well, that, or the glass cover is to prevent the nighttime cleaning staff from fucking around with the phone ("Hey, Batman; is your refrigerator running?").

It's nice to see Bruce and Dick doing "guy stuff," like listening to baseball anecdotes from the three top players on the Gotham City Eagles. Manly! (although Dick is REALLY swinging for the cheap seats with his display of enthusiasm. It's okay, son; no matter how much you enjoy or don't enjoy baseball, Daddy will still love you)

Whoa! Hold up a minute! BATMAN is responsible for Mr. Freeze's condition?!? Don't listen to Robin or Gotham's top keystones on this, Bats: Your feelings of guilt are COMPLETELY appropriate (even if it was a fight in a mad scientist's laboratory). At least now we know what happened to Doctor Death (where ma Golden Age peeps at, yo?).

So, Batman wants to show compassion toward Mr. Freeze, and try to find a cure for his condition, and Chief O'Hara proclaims that such generosity of spirit is "wasted on the fiendish likes of him."

"We'll use our Anti-Crime Computer in the BatCave." This just goes to show how much the advent of software changed the world of computing. From the above statement, we can infer that the only reason Batman hasn't turned to a life of crime (and, really, once you've witnessed at such close proximity what complete incompetent chuckleheads the GCPD truly are, why wouldn't you?) is that the hardware costs of converting his Bativac 3000 over to PRO-crime functionality would have cost roughly 3-5 million USD.

Mr. Freeze has a henchman named "Chill?" Dude, that is COLD. He might as well have a minion named ".38 Special."

I guess his henchman "Nippy" drew the SHORT icicle when they were picking the order for giving out cold-based nicknames.

It's nice to see that Mr. Freeze doesn't lounge around his hideout in costume, but instead changes into a perfectly respectable suit. On the flip-side, B&R can't throw a frigging slide onto a microscope without dressing up in full drag first.

I'm pretty sure "games you can play with a person-sized Portable Freezing Chamber" is NOT something you want to look up on Urban Dictionary; at least, not lightly. All I'm saying is, if the Dynamic Duo were up against a noose-based villain, the experimentation they're doing right now would fall squarely in the category of Autoerotic Asphyxiation.

"...his evil scheme for revenge ..."? C'mon, Bats; under the circumstances, wouldn't you grant that Mr. Freeze's desire for revenge is, if not socially acceptable, at least kinda understandable?

Aw, man. Mr. Freeze's personal freezing air supply on his back is CLEARLY two fire extinguishers; they didn't even re-paint them (the producers probably didn't want to have to spring for two new fire extinguishers to replace them).

All this, and taunting skywriting too? Somebody pinch me.

Holy cow! Batman and Robin are climbing to the second floor of a building like people, for a change.
I am VERY disappointed that this eastern Europen head of state isn't named "Queen Beehive."
"I'm sorry, Batman. I wanted to toy with you a little bit longer. But, das ist de vay the ice cube crumbles."

Heyyyy... I'm beginning to suspect that Mr. Freeze isn't from around here... 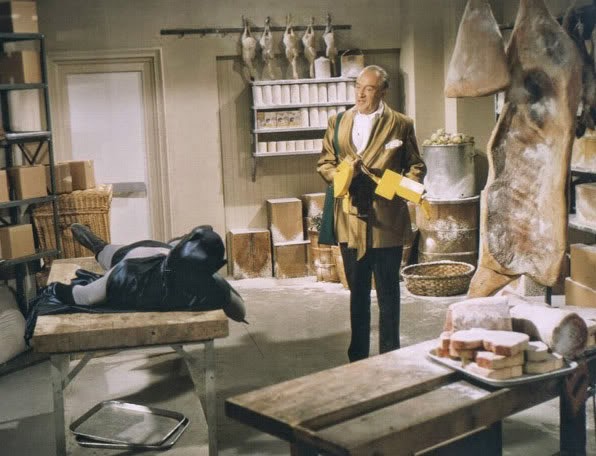 "Patience, O'Hara. No public official elected by the people can allow his emotions to overrule his dedication to duty, and carrying out the due process of law."

So Batman and Robin are frozen solid, and manage to emerge from the experience without losing so much as a little toe. "Saints be praised!" indeed, Chief O'Hara (cuz there sure ain't a rational explanation as to how that happened).

You can only milk the gag of Mr. Freeze absent-mindedly forgetting to extend his hideout's non-50-degrees-below "safe area" (so his underlings can safely move about the place) so much, before it starts to just sound like he's a bad boss.

Okay, Mr. Sports-Announcer, I get that you MAY be suffering from a kind of Stockholm Syndrome from being in the Batman world, wherein you start to believe that various supervillains' dastardly plans actually amount to something more than a low-level nuisance; nonetheless, referring to two opposing baseball teams as "deadliest rivals" still strikes me as a tad hyperbolic.

I suspend a LOT of disbelief in the course of watching this show. But having a European princess who sounds like she just came off the bus from Billings, Montana MAY just be a bridge too far.

Are they DELIBERATELY choosing stock footage that so completely mismatches the rest of the show's lighting and film stock?

Aw. Alfred is holding the TINIEST bag of peanuts I've ever seen. Is this an Olympic venue or something?

Yeah, Robin, now that the professional athlete has been saved, you should totally just leave him tied up on a park bench to wait for help. I mean, it's not like there's a bunch of guys you could use help beating up on or anything.

Robin: "What took you so long? I phoned before I came here, over an hour ago!"

Is life-threatening police incompetence really an appropriate subject for this much whimsy? I mean, sure, O'Hara was backed up at the scene by crack officers Toody and Muldoon, but still.

And of course, the final wrap-up scene features Princess Midwest, about to start an international incident by hooking up with an American baseball player; as well as Aunt Harriet, pushing Bruce and Dick's PTSD-buttons by serving baked Alaska for dessert.

Geez, Aunt Harriet, how about a trigger warning next time?

p.s. Mad props to ME, for making it through two entire Mr. Freeze episodes without a SINGLE "Let It Go" joke.