The Couch Crusader -Looking Back at Batman '66 by Geena Phillips 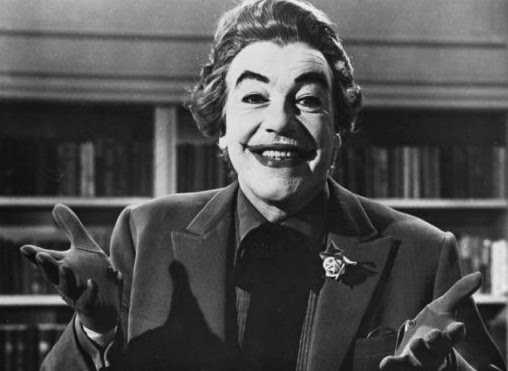 Our story begins at Gotham State Penitentiary, where a game of softball is underway. Now pitching: The Joker! Some have suggested that the Joker is more of a catcher, but I believe he's equally comfortable in either role.

And while we're on the subject, it's important to remember that this series was conceived from the word "jump" to have both colorful adventures to appeal to kids (>raises hand< it's impossible to overstate just how enthralled with this show I was as a child), AND more subversive humor that adults would appreciate. I mention all that at this juncture because there is NO WAY the word "penology" would be used that many times in the space of two minutes unless it was on-purpose.

"He sprung himself!" Heh; I see what you did there.

A "ball game." Well, they're finally mixing it up on excuses to get Bruce and Dick out of the house.

By the way, have I mentioned yet that the Batmobile (designed by George Barris) is completely fucking beautiful? Because it is. It may have been my first step toward the belief that design IS what art WAS.

Nice nod to Ernie Kovacs in the museum scene. I approve.

I don't know about y'all, but I am shaking like a junkie for the upcoming Blu-Ray release of this show. I eagerly look forward to the day when I can pause one of the Joker's close-ups, so I can sit next to the TV, and lovingly stroke each and every High-Definition whisker in Cesar Romero's poorly-concealed mustache.

Dude, calling YOURSELF "the Clown Prince of Crime" is a douche move. What are you, The Situation?

So, the Joker has decided that Batman's such a thorn in his side because of Bats' belt full of nifty doodads, and that he should fight fire with fire by putting together his own Joker-centric utility belt (and I do mean Joker-centric; his own damn face is on the buckle). I REALLY wish this plot had been recycled for the 90's Batman: The Animated Series; I can only imagine what amazing hijinks Paul Dini and Bruce Timm would have had with this concept.

Commissioner, sir, I don't mean to contradict you and your many years of law-enforcement experience; but, I don't think a brick, with a clown doll tied to it, hurled through your office window constitutes the Joker "subconsciously pointing toward his next crime." But, then, I'm not a top cop.

Bruce Wayne: "I wonder if I might have that doll, as a souvenir."

Commissioner Gordon: "I don't see why not."

Note that this is the part about 11-12 minutes into the average episode of Forensic Files where the case seems hopelessly cold, and there's not a clue to be found.

Another common thing found in episodes of Batman is just how helpfully everything is labelled, both in the BatCave and in the villains' various lairs. I'm pretty sure this level of safety-mindedness goes above and beyond the requirements of OSHA.

And am I alone in wishing the "Hyper-Spectrographic Analyzer" could talk? "You guys! Guys! Guys! You will not BELIEVE what is going on spectrographically with this doll! Omigod, you guys!"

Jesus. After 70+ years, how is the Joker not COMPLETELY SICK of I Pagliacci? Also, how can any traveling company of Pagliacci afford the MASSIVE insurance premiums that would surely result from being constantly targeted for wacky criminal activity by the same lunatic with a "tragic clown" fetish?

Gotta say: Not feeling the cliffhanger on this particular episode. I mean, threatening to unmask the Dynamic Duo on live TV is a time-honored chestnut; but I'd take it a lot more seriously if they weren't just being loosely held at the upper arms by a couple of dudes.

Before I get into this episode itself, I wanted to take a moment to give kudos to IFC for how it handled this marathon. First off, if they time-compressed the episodes to fit into the modern cable-TV half-hour, it's not intrusive at all. Also, they didn't awkwardly insert commercial breaks at weird places not in the original program (yeah, I'm lookin' at YOU, BBC America). Finally, they haven't been skipping ahead in the order (at least not yet); this has afforded me the opportunity to view the show's evolution in the smallest possible scale. They also kept the original aspect ratio, and didn't stretch a 4:3 show to fit widescreen TVs (yeah, I'm lookin' at YOU, Food Network and The Cooking Channel).

Batman being stymied by smoke pellets (from the Joker's own utility belt). Oh, the irony!

Dude! There you go AGAIN, calling yourself "the Clown Prince of Crime." I'm serious now; you've gotta cut it out, or we maybe can't be friends anymore.

Batman flying up a rope (as he does when there's no wall to scale) is certainly cheesy, but it's not one bit less cheesy when done with CG.

I love how, after a while, the fact that virtually every single bit of automotive business is optically sped up becomes something the viewer no longer pays attention to.

Anytime an old-time TV show features a white guy in a suit delivering the news from behind an old-time news desk, all I can picture now is Aaron Sorkin at home, furiously spanking it for the duration of said scene.

Geez, Commish, thanks for the pep talk! Do you coach Little League in your spare time? Cuz I'm sure Batman and Robin are now ready to charge back out on the field, with a renewed sense of vigor and purpose. :b

Newscaster: "In this hour of peril and need, perhaps all our prayers are best summed up by my small son, Harold, just eight years old. Kneeling beside his little bed, hands clasped reverently before him, he said, 'God bless mommy, God bless daddy, God bless my dog Spot, and please, Batman, whoever you are behind that mask of yours, please save us.'" (whatever you do at this juncture, avoid picturing Aaron Sorkin approaching climax, at all costs)

For crying out loud, Harold, when Batman said "Pray to me!" in Batman Begins, he was trying to scare the pants off a criminal; he didn't mean it literally (and he's sorry you overheard that whole thing).

The Joker hijacking a television broadcast is an old familiar standby, and makes me all warm inside. His then staging a parody of What's My Line is the icing on the gravy.

I know I've made this point before, but the fight choreography on this show is all but guaranteed to result in injury.

I don't miss newspapers at all, but I still have a soft spot for the spinning headline.

A quick note on the henchmen of Batman: All the villains seem to have them, and they're all virtually interchangeable. I'm rapidly developing the theory that Batman was the Law & Order of pasty, craggy, middle-aged white guys; i.e., everybody did their time there in the late 60s.

So, your master plan is to overcome Batman and Robin with a sleeping-gas Champaign cork at the ship christening they're scheduled to conduct? Well, it has the virtue of having never been tried, I guess...

And speaking of the ship christening...

Random Guy In Crowd: "Hey, what are you two guys doin' out here, when the Joker's out there takin' over the city?"

That, citizen, is a COMPLETELY FAIR question. Random Guy for mayor!

"Egads! What sorcery is this?" Thank you, Joker, for the notable quotable of the entire episode.

C'mon, Batman. You're already beating the living stew out of the Crown Prince of Crime (see, Joker? It's perfectly okay if SOMEONE ELSE calls you that); do you have to simultaneously humiliate the poor bastard, by breathlessly explaining just how you outsmarted him? Let the Joker take his whuppin' with some dignity, willya? He already knows he's got it coming; mastermind-shaming him seems excessive.

The Joker, foiled by his own utility belt? Oh, the irony!

Please consider NOT putting the Joker back in the minimum-security wing this time. Assholes.
No love,