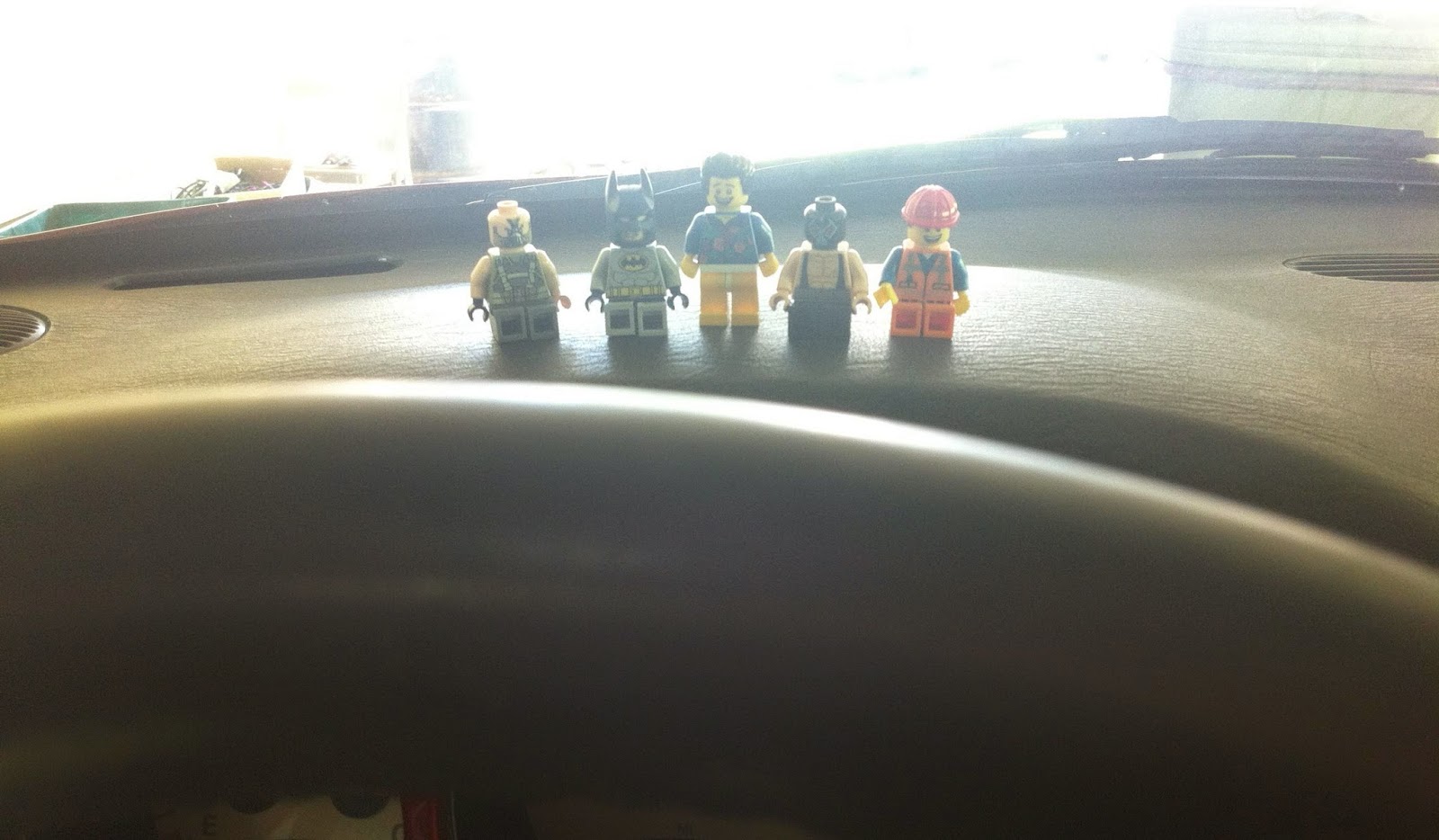 Well, these are the words I have been dreading to say for a while. Dragon Con is over. We call an end to the 2014 convention. As previously stated in my thoughts on Dragon Con here on Needless Things - this was my first journey to the con in well over five years.


Wednesday night was shockingly fun. I say that only because for me I didn’t expect anything to be happening. Turns out a couple hundred people were hanging out at the Pulse lounge in the Marriott. There were a few there in costume and as a bonus I got to meet some new people, too.


Last time I went to the con I believe I stood in the badge line for upwards of five hours. Back then this was considered normal. So Thursday morning I headed down at 10:00 in the morning to get my badge. Upon arrival I was amazed that there was not a line. Sure, there were people going in with me but as soon as we entered we were dispersed to different counters with people there to help. I think I may have waited 2 minutes for them to finish up with the person in front of me. I prepaid for my ticket so that may have been a big advantage for me.

The best time I had was actually Thursday night, as there was a Buckets Of Rum kick off party which was excellent. If you don’t know what the now infamous Bucket Of Rum is, then you probably have never talked to anybody from Dragon Con before. Over the past few years they have become somewhat famous for making a good time even better. Most of my time was spent at the Hyatt bar listening to nerdy music from the DJ.

Towards the end of Thursday night I made my way to a Ghostbusters panel. That's right - there are now panels as early as Thursday before the con even opens. Before I went to the con people told me that the fan panels were fairly easy to get into. This year that was not the case. There were a few panels that I was standing at the back of the room. The Ghostbusters panel was jam packed and a great first panel for me to go to. It was a fun discussion with knowledgeable people. I did not try any panels that had celebrities as those were hours of line waiting that I did not want to do. I did get to see some great panels about LOST, Land Of The Lost, a 1984 Dice Roll panel (which was amazingly fun) as well as a few others.

Overall Thursday night was probably the most fun I had at the con and that may or may not be the result of much alcohol consumption. I also met some really cool people as well as being able to chat with Phantom Troublemaker for a few minutes too. 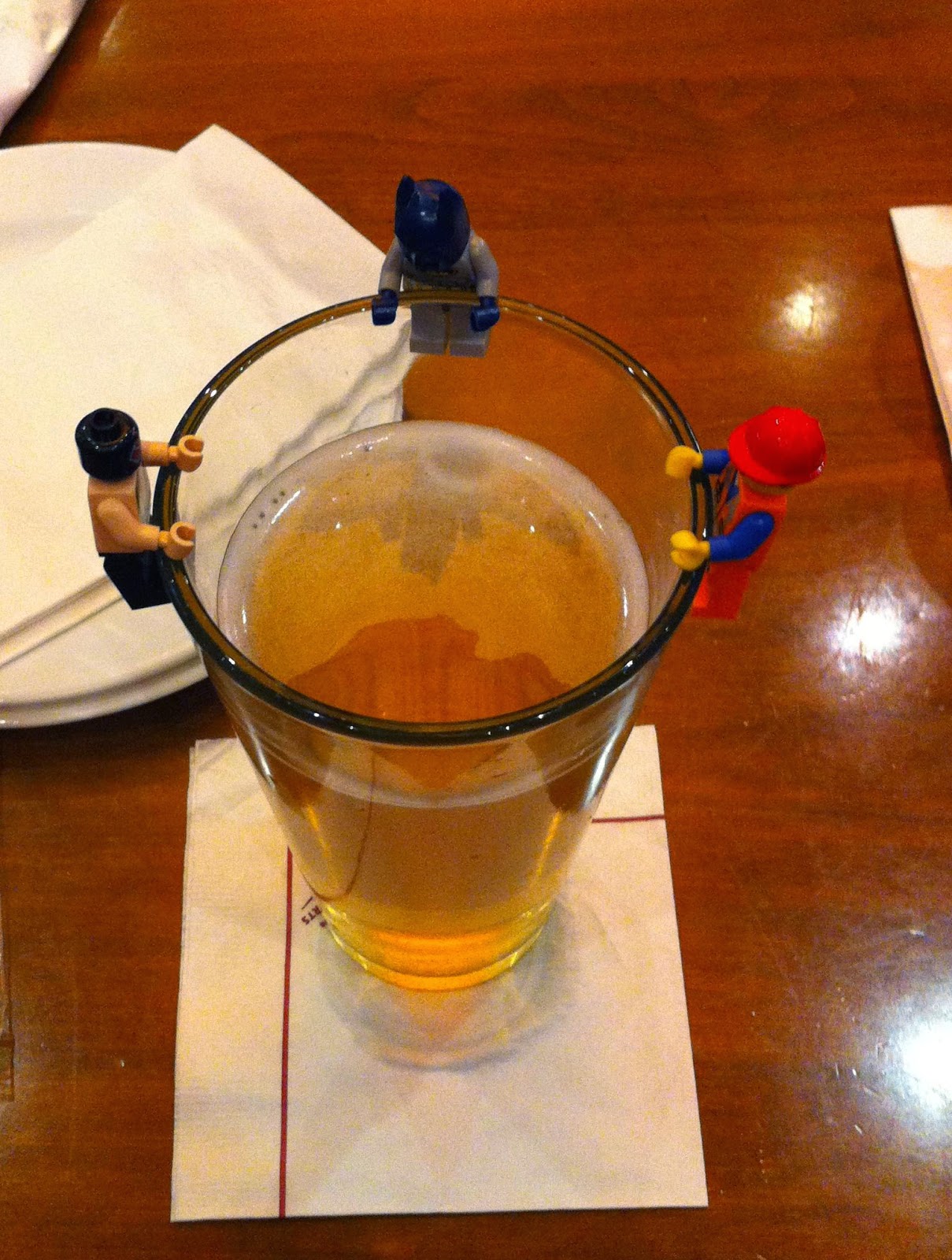 I sort of had a game plan for Friday which involved knocking out the dealer room and Artists Alley. I didn’t feel the dealer room as nightmarish as most people, but I did go first thing in the morning. Once inside it turned into a bit of a maze, so it was hard to tell if I had already been to a section. When I was ready to leave it was nerve racking trying to find the exit but eventually I did get out alive. I wish I would have bought a few things but I came to the conclusion that I didn’t want anything bad enough. Although I sort of regret not buying the Terminator (ReAction) figures because this one dealer had all of them at a decent price. Also, there were Lego Minifigures galore at this one dealer but I thought the prices were a bit too high for me to support the fact that sets are being pieced out. But that's a whole other article. 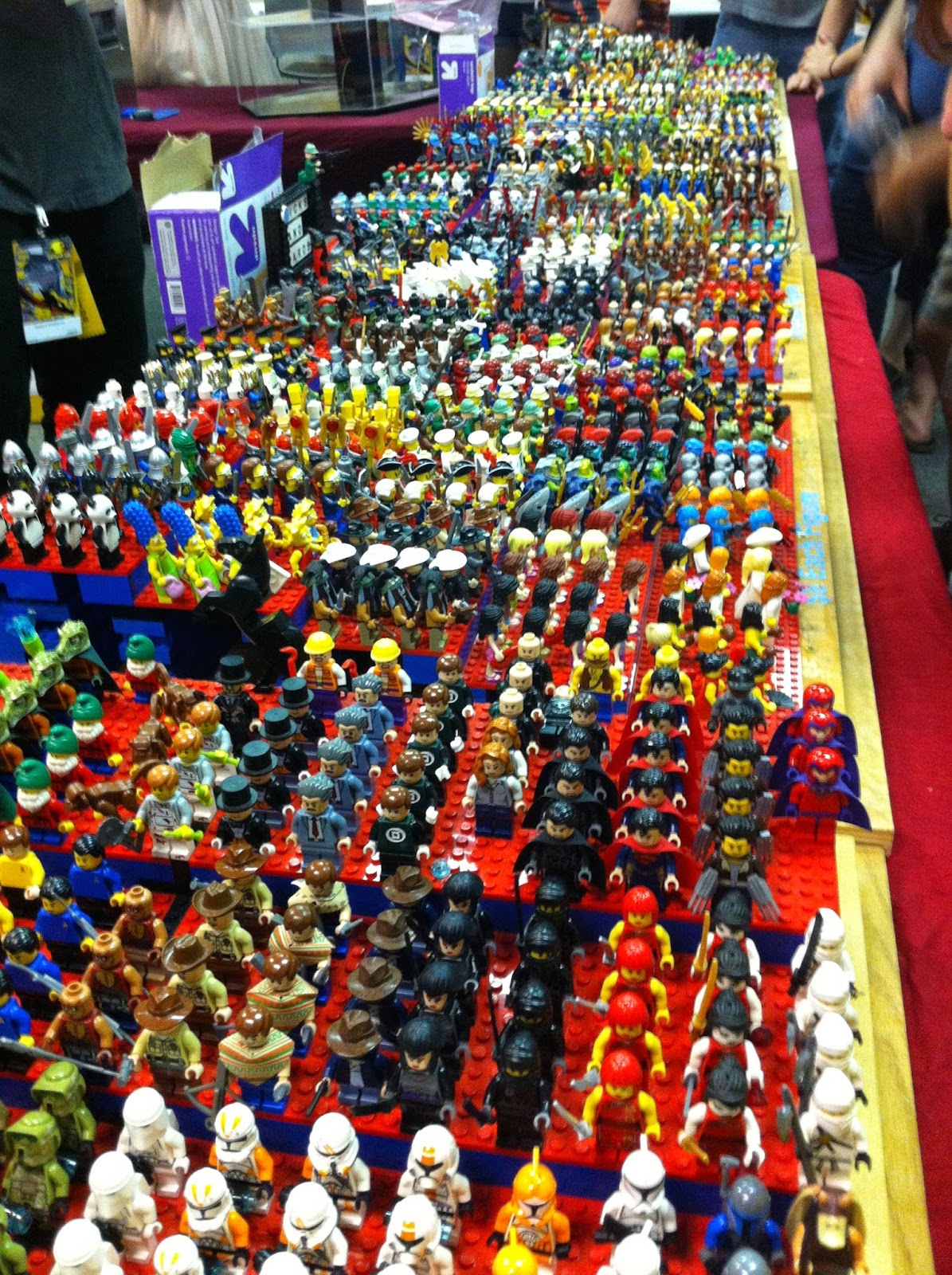 Once I finished there, I made my way over to the Artists Alley which was fantastic. Lots of great talent gathered in that room to display their abilities. There were two people I was specifically looking for because they are nice guys and I like to buy their stuff. Jason Flowers is an artist I met years ago and one I followed on MySpace, but that should tell you that it's been a while. His art is both affordable and wonderful. Lots of pop culture movie-style posters; and if you like Teenage Mutant Ninja Turtles than you have to check this guy out. He is one of the best at portraying the green guys and I have too many originals and prints to name all of them. He did a Casey Jones for me that is all sorts of awesome!

The second was “Howdy” Michael Gordon from both the Earth Station One Podcast and the writer/creator of the comic book Tiki Zombie. This is a great book that I can best describe as almost like a Saturday morning cartoon. It's got great and funny characters and artwork that pops off the page. It's in black and white, but that is one of its best qualities in my opinion. The series has two issues and I was told that more issues should be coming in 2015 to celebrate Tiki Zombie's 5th year anniversary.

Friday night had two events that I got to attend. Dragon Con Wrestling and the Earth Station One Meet and Greet. The wrestling was a fun event with commentary by our very own Phantom Troublemaker. It had some cool surprises like an appearance by She Hulk and a tribute to Ultimate Warrior with one of the wrestlers doing a great impression of him. I stayed for about an hour and a half and then headed to the ESO Meet and Greet. It was great to hang out with a group of people that I listen to on a weekly basis. I got there a little late but had some fun conversations despite the weather being a bit on the warm side. 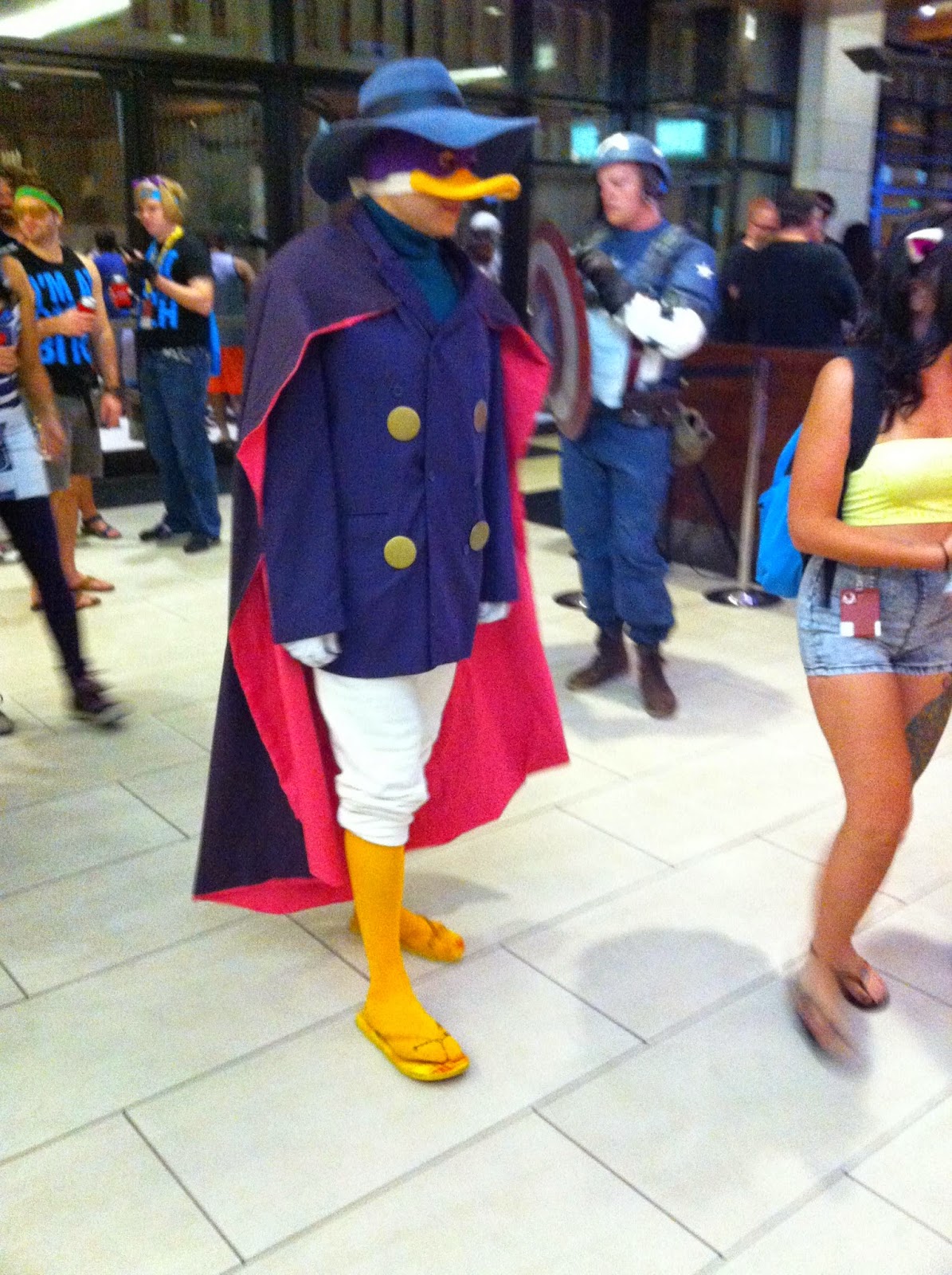 On Saturday I spent a lot of time at a few panels and around five o' clock I had to head back to reality. Apparently you can only spend so much time away before the day job calls once again. I thought that the ride back would be awful with me regretting leaving but oddly enough it wasn't. Don't get me wrong - I was sad to go and wanted to stay but I also felt complete at the same time. Even though Saturday night I heard the parties were off the charts, I'm glad that at least I was able to go for most of the weekend after such a long hiatus. 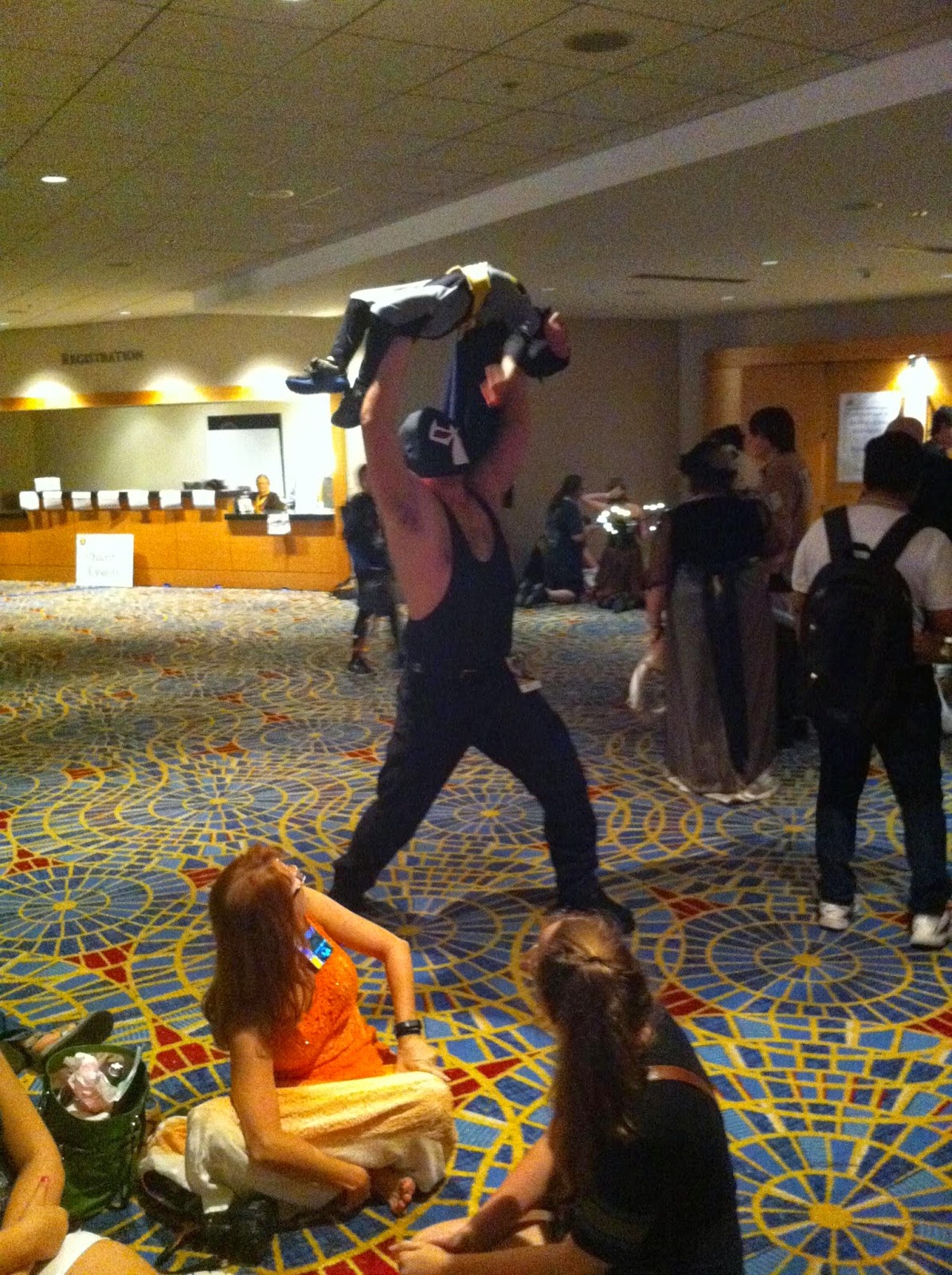 I have heard many people complain that Dragon Con is getting too big. I am not going to get into this debate, but I will say this - I had a great time. Are there a lot of people? Yes. Absolutely. This being my first Dragon Con in a while and it being nearly double the size since last time, I sort of went in with a plan. I knew Saturday would be crazy so I spent Friday doing the stuff that I knew would be insane. I also wanted to do panels, which is something I did not do the last time I attended. Plus, I got some good party time in meeting and conversing with new people. Although I still don't know how to handle that awkward lull that happens about 15 or 20 minutes into the conversation. I'm sure I will figure that part out eventually. 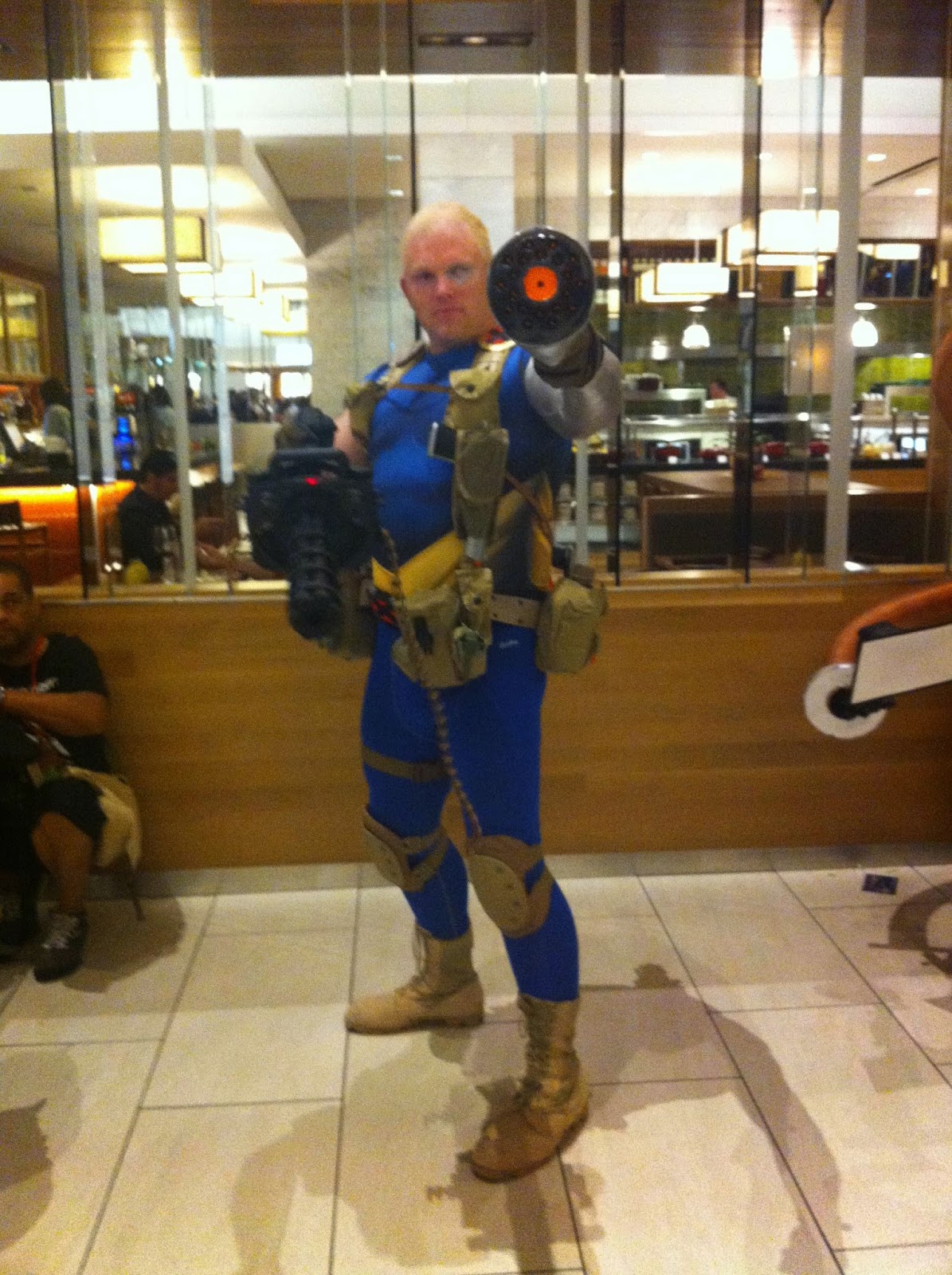 The best thing about Dragon Con for me is that I could absolutely be myself with no questions asked. If I wanted to sort of dress up like Bane, nobody looked at me weird. If I wanted to wear a shirt tied around my waist (cuz thats what we did in the 90's, boys and girls) then nobody was going to tell me that I looked like an idiot. They might have thought it but chances are they were too busy having fun and being even more dorky than I was.

On a daily basis in the real world there is always this moment where I feel out of place. Where other people look at me as if I don't fit in. A laugh or a snicker or a simple “really?” can instantly make me wish I was among my friends. By friends, I mean 65,000 people that I don't know but if you have ever attended Dragon Con than you will totally understand.