When I did finally wake up on Friday afternoon I felt fine. No headache, nothing. No indication that I had been in some kind of weird, drunken mindwarp the previous night.
I made myself some oatmeal (which I had to eat without the assistance of a spoon), cleaned myself up, and went to wander around a bit before DCW. I was going to need to be there a little early this year because there was a possibility that Monstrosity Championship Wrestling was going to put on a couple of matches. I didn’t know if I would be doing my ring announcing thing or maybe managing somebody or what. It turned out to be a much bigger deal than that.

Most of the DCW guys know me now because of the wacky write-ups I do every year. And also because of the DCW Hooligans, the crew of around forty people that sit front row every year and are really obnoxious. I’ve gotten to know the wrestlers a little more over the past couple of years thanks to working with a lot of the boys at MCW and last year I formally met AJ and Tiny (the guys that run the DCW shows) for the first time. They welcomed me backstage and let me cordon off a section for the Hooligans.

This year they asked me to do commentary.

This was a huge honor. To me (and the rest of the Hooligans), DCW is bigger than WrestleMania. I mean, logically I know it isn’t, but if I had to choose between watching DCW and watching WrestleMania, I would watch DCW. It’s that big of a deal. And that much fun. Which was kind of the problem. If I was going to be doing commentary I wasn’t going to be able to hang out with the Hooligans and enjoy the show. I also wasn’t going to be able to take pictures and make notes for my recap. This is what I told AJ at first, but after thinking about it I went back and told him I’d do it. I just couldn’t pass up the opportunity to be a part of that show.

I got to walk out to the DCW theme music – “Connection” by Elastica – alongside Tiny and AJ at the opening of the show. I got to stand in the ring with the DCW Hall of Famers as the new inductees were honored. And I got to sit at the DCW English Announcers Table and call the action for the entire show.

It took me awhile to figure out exactly what I was supposed to be doing. DCW doesn’t operate quite like any other wrestling company. There’s no ring announcer (which is the position I am most comfortable with) and the commentary tends to be much more sporadic. But after a couple of matches I got used to it and had a pretty good back and forth going with Tiny. I feel like we had a pretty good jokey chemistry.

Granted, nobody heard us because the Hyatt Centennial Ballroom has a shitty sound system, but it was still exhilarating. I’ll admit – after a few matches I was really missing the Hooligans and wishing I was across the room. But looking back I have to say that I’m glad I sat at that table and was a part of the show. And as the last match started, I turned to Tiny and told him that this one was just too damn big and I was going to have to return to my crew. I got up, grabbed my beer bag, and went back home to the Hooligans. Who were eagerly hitting each other in the heads with signs, spatulas, and whatever else they could get their hands on. And once again some idiot knocked my beer out of my hand.

After DCW I had business. Serious Puppet Business. There was puppet improv in the Hyatt at 11:30 and there was no way I was going to miss it after last year’s installment was one of my favorite things at Con.

I had the good fortune to run into Cousin Bill en route to the puppet show and invited him along. One of the most important things I learned at Dragon Con 2014 was this:

The best times you have at Dragon Con are the ones where you are helping people enjoy Dragon Con.

Whether it’s putting on a show, exposing someone to something new, helping someone get on a panel, guiding people to different parts of Con, or even just helping people set a room up. The very best times I had were those.

Cousin Bill and I were recruited to help set the room up for puppet improv since the hotel staff hadn’t. This involved resetting every chair in the room and pulling stacks of more chairs out of the back. It was not-fun labor that had to be done very quickly – the sort of thing I usually hate. But I loved every minute of it because I knew it was for Dragon Con.

Once the room was set and the doors opened, I had the pleasure of watching one of the best things at Con next to Beau Brown, my Dragon Con mentor, and Cousin Bill, who had never seen anything like this before. We watched as Lucky Yates, Stacey Gordon (from the Puppetry Track episode of the Needless Things Podcast), Mark Meer, Alison Mork, Victor Yerrid, Donna Kimball, and Paul McGinnis put on one of the most entertaining shows I have seen.

Puppet improv is very similar to standard improv. Various games are played and suggestions are taken from the audience to enhance the experience. I was very proud that one of my suggestions was used – and to hilarious effect. They needed a reason for a guy to love a girl and I yelled out, “Because her feet smell good!” They took it.

The performers have access to a massive pile of puppets. For each game they select a random puppet and put it to use. You’d think the appearance of the puppet might matter, but it doesn’t. The puppeteers’ performance is everything. The stage is set up in such a way that you get to see the puppeteers as they control their puppets, but you can also watch the puppets as they would be seen on television or in a theater thanks to a huge screen to stage left. This is one of my favorite aspects of the two years of puppet improv that I’ve seen. I love being able to watch the puppeteers’ different styles as they work. It’s fascinating to me to see them operate the rods and mouths while assuming various stances and to a certain extent acting out their roles beyond what would normally be the view of the camera. It’s like a DVD special feature.

Over the course of an hour, a packed room of 500 people laughed hysterically as seven incredibly talented puppeteers took on every improv challenge and created an unforgettable show.

After you finish reading this I recommend you go to Puppets N’ Shit on YouTube. It will give you a pretty good idea of how awesome puppetry can be if you don’t already know. The Lucas interviews are outstanding. I could watch them all day.

Go to Puppet Improv next year. Heck, find a place local to you that hosts it. There are Puppet Slams all over the place. It really is something that should be experienced at least once by everyone. If you’ve ever laughed at the Muppets, if you were oddly transfixed by Sifl & Olly, if Meet the Feebles left you wanting more; find a way to see some live puppetry. You won’t be sorry.

After Puppet Improv I went back to The Spot in the Marriott for some people watching, only to discover that The Spot was now occupied by a bar. That might seem cool, but we Hooligans are a wise bunch who do not spend money on alcohol at Con; therefore a bar in our spot is nothing more than an obstruction.

I should go ahead and point out the fact that I did not take very many pictures this year. I think I barely took over a hundred between my phone and my camera. I was a lot better about posting stuff during Con, but that was mostly because I actually had a signal almost everywhere; even in the track room. I was quite surprised to be able to upload this awesome video at one point:

I think my picture slacking was partially due to a feeling of having seen it all. While there were a lot of fantastic costumes, there are so many that you see year after year. And it’s not that they aren’t great, but how many pictures of Steampunk Batman do I really need?

Another factor in my photographic decline was not wanting to deal with the pressure and time gobbling of trying to take a bunch of awesome pictures. I had enough going on this year that I didn’t want that. If you don’t know what I mean, allow me to explain:

You’re standing in the Marriott enjoying an adult beverage and talking with friends. Then you see somebody in a perfect Dynamo costume. They’re all chubby and the costume lights up and everything. You not only want a picture of that, you want a picture with that. You find something to do with your beverage, you get your camera out, turn it on, get Dynamo’s attention, get somebody to take the picture, show them how to use your camera, pose, have the picture taken, realize that the last picture you took was outside so the flash wasn’t on, turn the flash on, take the picture again, tell Dynamo how awesome he (or she) looks, tell them to have a great Con, thank the person that took the picture, get your camera back, turn it off, get your beverage, apologize to your friend for interrupting your conversation about how amazing Inhumanoids were, and then get back to drinking.

And I used to do this four hundred times per Con.

I just couldn’t do it this year. There were a few instances where I felt sassy enough to go to all the trouble, but for the most part I snapped the occasional lazy picture and moved on.
Oh, and the final factor is my shitty photography. So many times the one picture I really wanted turns out blurry. I often take two pictures, just to be sure. That’s when this happens: 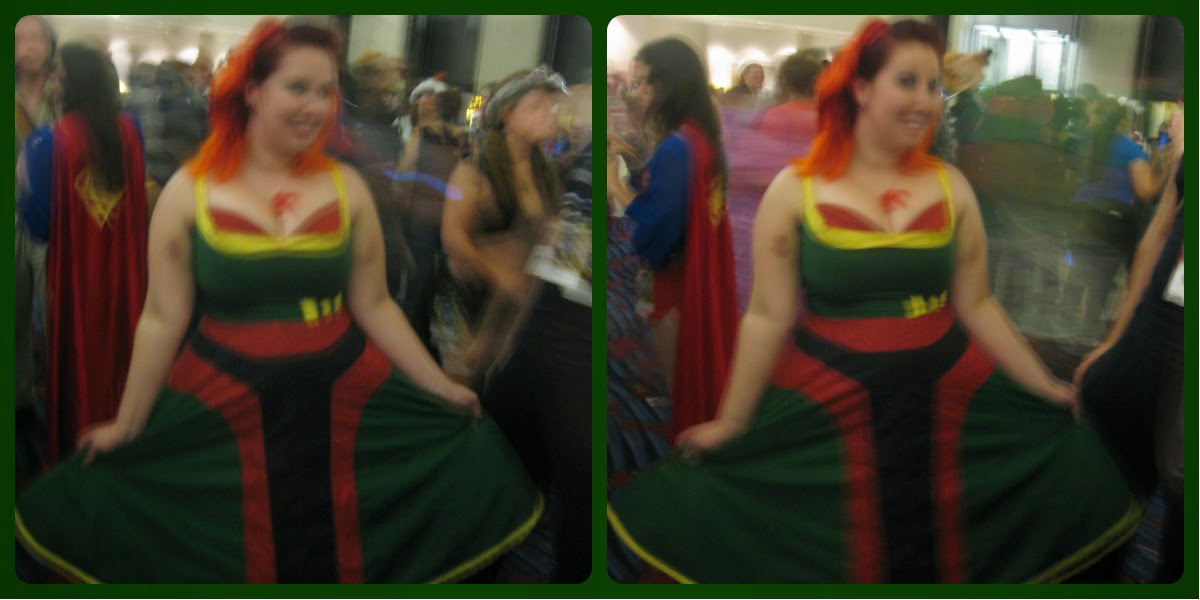 Posted by Phantom Troublemaker at 7:16:00 AM